James Byrne, marketing manager PML Group with this week’s Out Look on Out of Home.

The installation devised by Kev Gascoigne of Fairy Bricks comprises a LEGO mosaic framed on the board, which was built last weekend at Dublin Comic Con, held in the Convention Centre, and coordinated by brick.ie, the Irish Association for Adult Fans of LEGO. It is Ireland’s largest and longest-established LEGO User Group. 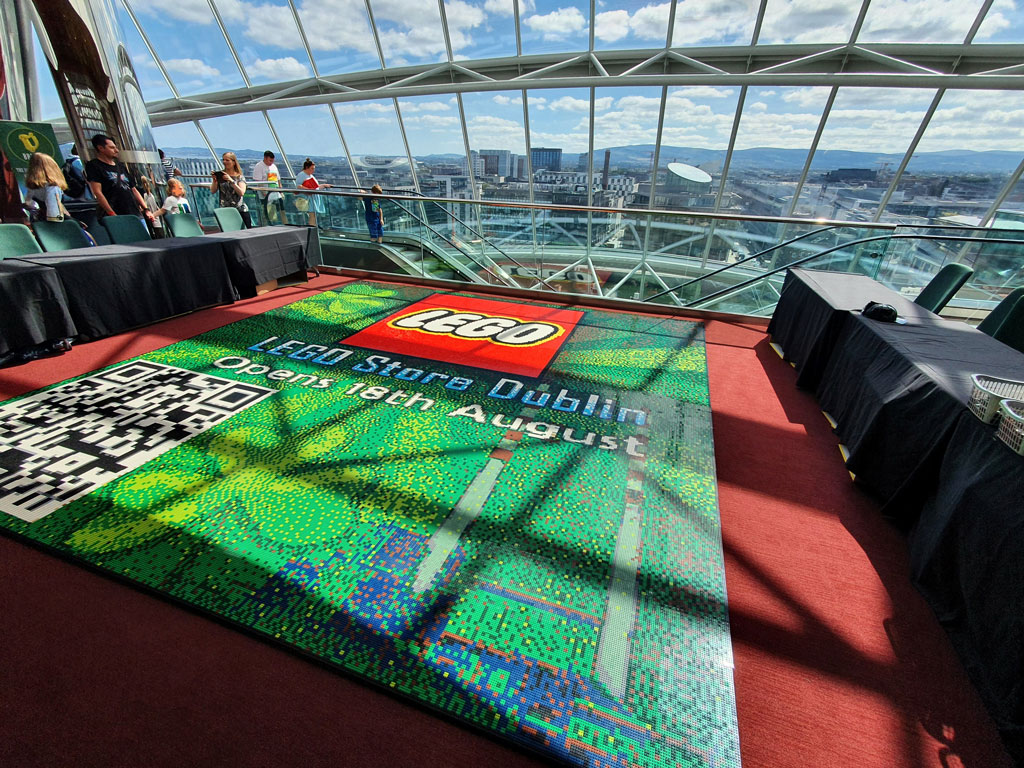 The mosaic consists of over ninety thousand bricks and took the 600+ attendees and volunteers approximately twelve hours to complete. It now comprises the major element of the six-metre squared OOH activation planned by Initiative and PML. 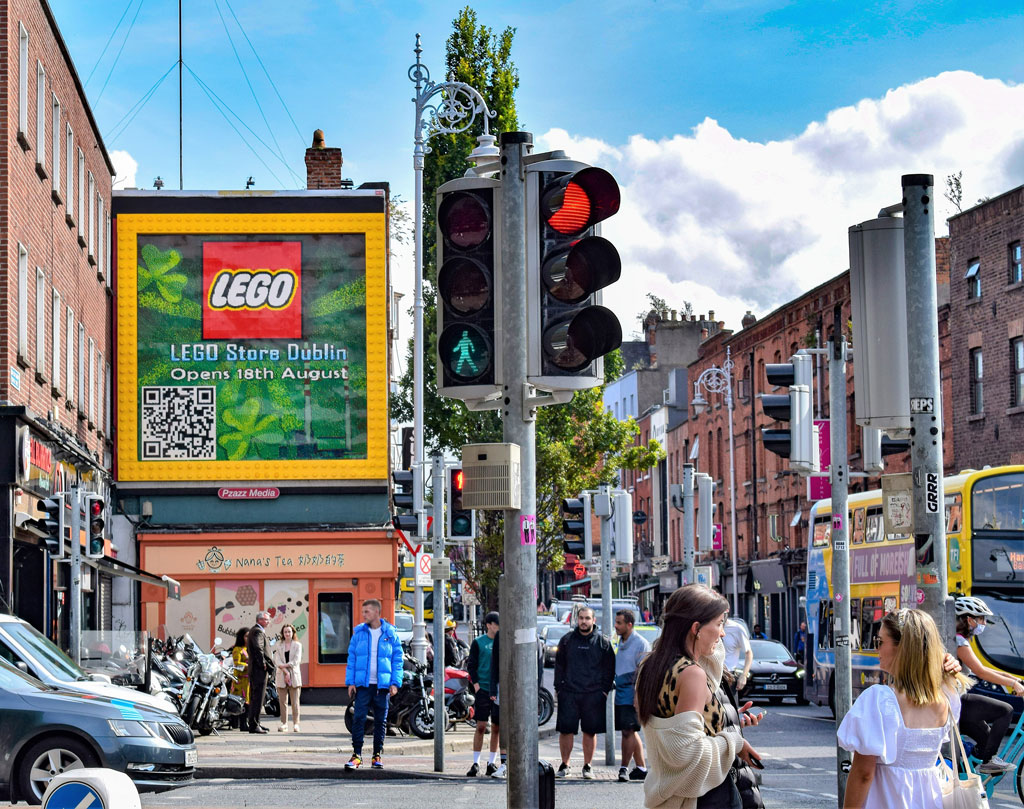 Visitors to the new store will be treated to the concept of “retailtainment”, which blends physical and digital experiences. This is to allow shoppers to both immerse themselves in the famous LEGO bricks and create personalised products.

Stéphane Knapp, LEGO Retail Regional Marketing Senior Director, said: “We are delighted that the time has finally come to open the doors to the first LEGO store in Ireland on the vibrant Grafton Street. Dublin has been part of our expansion strategy for many years given the huge number of LEGO fans in Ireland. The new store will inspire builders of all ages with endless play possibilities, innovative and immersive experiences, and personalised products.

“We are thrilled that there is such a large and vibrant community of LEGO fans of all ages in Ireland and we’re very keen to get them involved in the lead-up to the first LEGO store opening in Ireland. We were delighted to partner with the team at Bricks.ie who built this wonderful LEGO installation to mark the opening of our Grafton Street store. The installation is a testament to the builder’s creativity and imagination and is a wonderful way to celebrate the LEGO Group’s first Irish store.”

Pat Cassidy, Digital, Innovation & Experiential Manager, PML Group commented; “To promote the opening of their new store on Grafton Street, LEGO have created an exciting, giant brightly colours billboard on Wexford Street. The vibrant handcrafted, mosaic special with bespoke yellow LEGO frame, comprises of 92,777 LEGO bricks. It’s an amazing feat of engineering both in terms of the build itself and the installation. More importantly, it’s a great example of collaboration between the brand, the fans, and the medium of OOH. The special embodies the creativity of LEGO, the LEGO builders, and the OOH medium.” 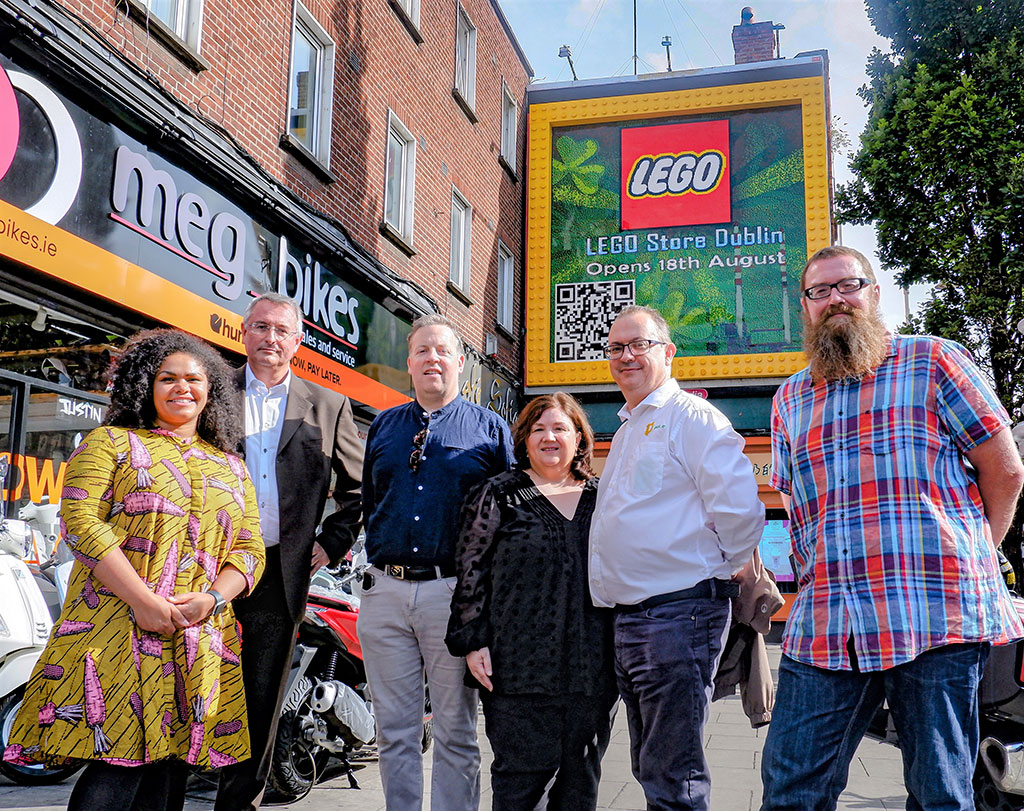 The Danish company is marking its 90th anniversary currently with worldwide celebrations. The company name came from “leg godt”, meaning “play well” in Danish. The company’s core product, the LEGO brick, was first produced in its current form in 1958. Fairy Bricks is LEGO’s charity partner and will be visiting Ireland in September to deliver over two thousand LEGO sets to children in hospital. 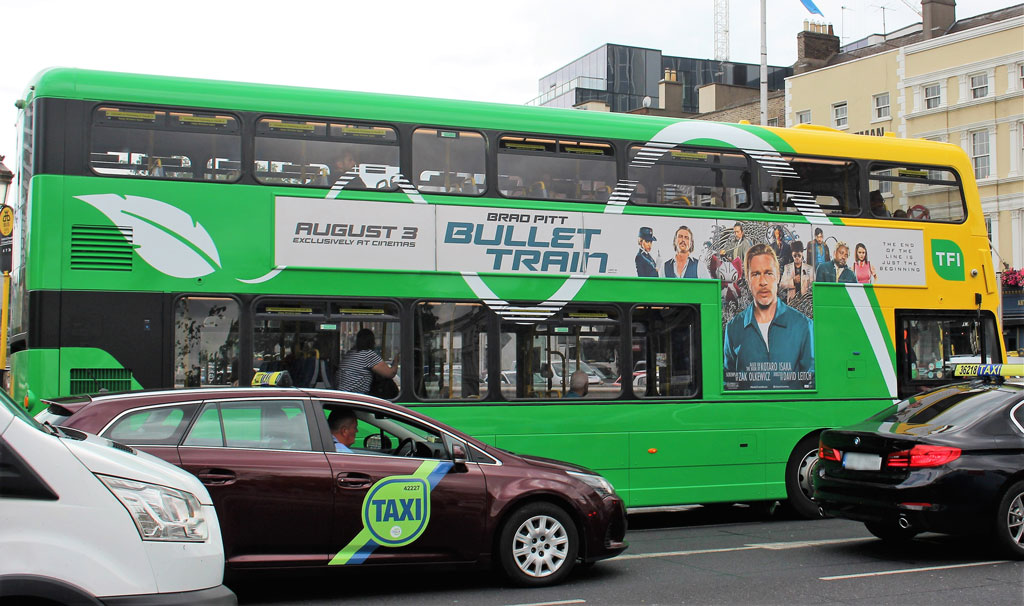 In its latest transport bulletin, the CSO reports that for the week beginning 25 July 2022 (week 30) there were:

The statistics suggest that restrictions lifting has coincided with public transport numbers being boosted significantly. It comes after public transport fares were cut by 20% in April. Recent data published by Revolut suggested spending on transport from its customers rose from June to July by 6.5% for buses and 6.6% for train journeys.

A recent survey, conducted by Amárach Research and Extra.ie, found that 55% of people who use public transport are more likely to use it after the fare decrease.

The latest AIB Retail Spend Outlook Report has found that customers have returned to spending on occasions and events in the second quarter of this year. With rescheduled weddings happening this year, clothing and beauty sales bounced back significantly. Many trends have reversed compared to a year ago. As more people returned to the office and hybrid working, the demand for electrical items slowed. 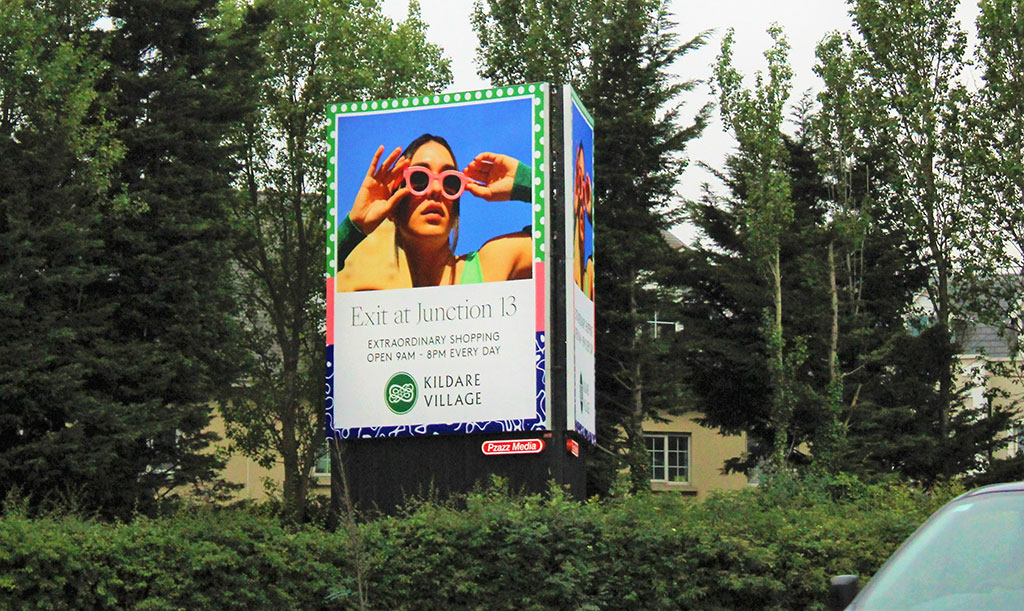 Sales in Q2 2022 for the wider retail sector remained stable. The value of instore sales saw an increase of 5% on last year versus a decline of 17% in the online channel. Overall, the clothing category is up 13% on last year, supported by an increase in social events, concerts, festivals and foreign holidays versus the second quarter last year. There is also a very significant change in consumer behaviour, with a 55% increase in the instore sales values and a 18% decline in online sales.

PML Group provides the most comprehensive and fastest source of OOH market intelligence via our WATCH service. This is powered by a monitoring team that inspects 100% of classic and digital OOH display each cycle.

For July (cycles 14-15), our monitoring established eir Broadband as the campaign with the highest display value, followed by Coca-Cola and Virgin Media. In the competitive Telecoms environment, eir was concentrating on switchers in July while Virgin Media’s campaign focus was on quality of service, specifically its WiFi offering.

Disney+ and JD Sports rounded out the top five with the streaming service highlighting some flagship elements of the current line-up, including Ms Marvel, Doctor Strange and Only Murders in The Building.

Beers and Ciders was the top investing category for the month, including Guinness Storehouse and Carlsberg 0.0 activity. Madrí Excepional was a new brand to OOH, appearing on large format classic and DOOH in July. Beers made up 12.5% of all OOH display in July. Retail followed in second, with a share of 12.0%, with Soft Drinks next at 10.3% SOV. The top five categories were rounded out by Telecoms and Media.