As the daily horrors of Russia’s invasion of the Ukraine continue to unfold, The Public House has launched an advertising campaign for UNICEF Ireland’s Ukraine Appeal.

The hard-hitting campaign examines the current ‘state of play’ for children of Ukraine, with a sound design driven radio spot which sets up the innocent scene of young children ‘playing soldiers’ and violently interrupts them with the real sounds of the weapons they imitate. The juxtaposition is stark, the contrast is visceral, the effect is lasting. The radio ad will be followed with an out-of-home, press, social and digital campaign.

The visual concept for the campaign depicts a child reaching out to play with his toy soldiers, only to find they have turned on him and he is now in their crosshairs. The image is intentionally confronting.

Colin Hart, executive creative director, The Public House, said: “The news coming out of Ukraine is frankly sickening. We reached out to UNICEF Ireland to see if there was anything that we could do to help the amazing team there in their efforts to support the children of Ukraine. We can only hope that the power of a piece of work like this prompts people to not only donate but to empathise and demand change. We are deeply appreciative of everyone who worked pro bono on this project. It just shows what a great creative community we have in Ireland who can pull together in times like this to produce such powerful comms.”

Peter Power, executive director, UNICEF Ireland: “The horrific war in Ukraine continues to pose an immediate and growing threat to the lives and well-being of the country’s 7.5 million children. Every day, it leaves deeper scars on a whole generation of children. Children are losing everything they know. Their families are being separated, their homes are being destroyed and their innocence and right to play is being extinguished. This campaign hopes to shed some light on their suffering, and we are grateful for everyone who has come together to tell their stories at such a critical time.”

According to Mikey Curran, senior copywriter, The Public House: “When the conflict in Ukraine began, many of us felt powerless. It’s easy to fall into the trap of thinking there’s nothing you can do to help. Then we had this simple yet provocative idea and thought maybe we can do something.
Our amazing team of suppliers stepped up and offered their services pro-bono. Whether you find this work shocking, or you’ve become desensitised to it, we hope it inspires you to reach into your pocket. That’s the easiest way to make a positive impact on the children of Ukraine.” 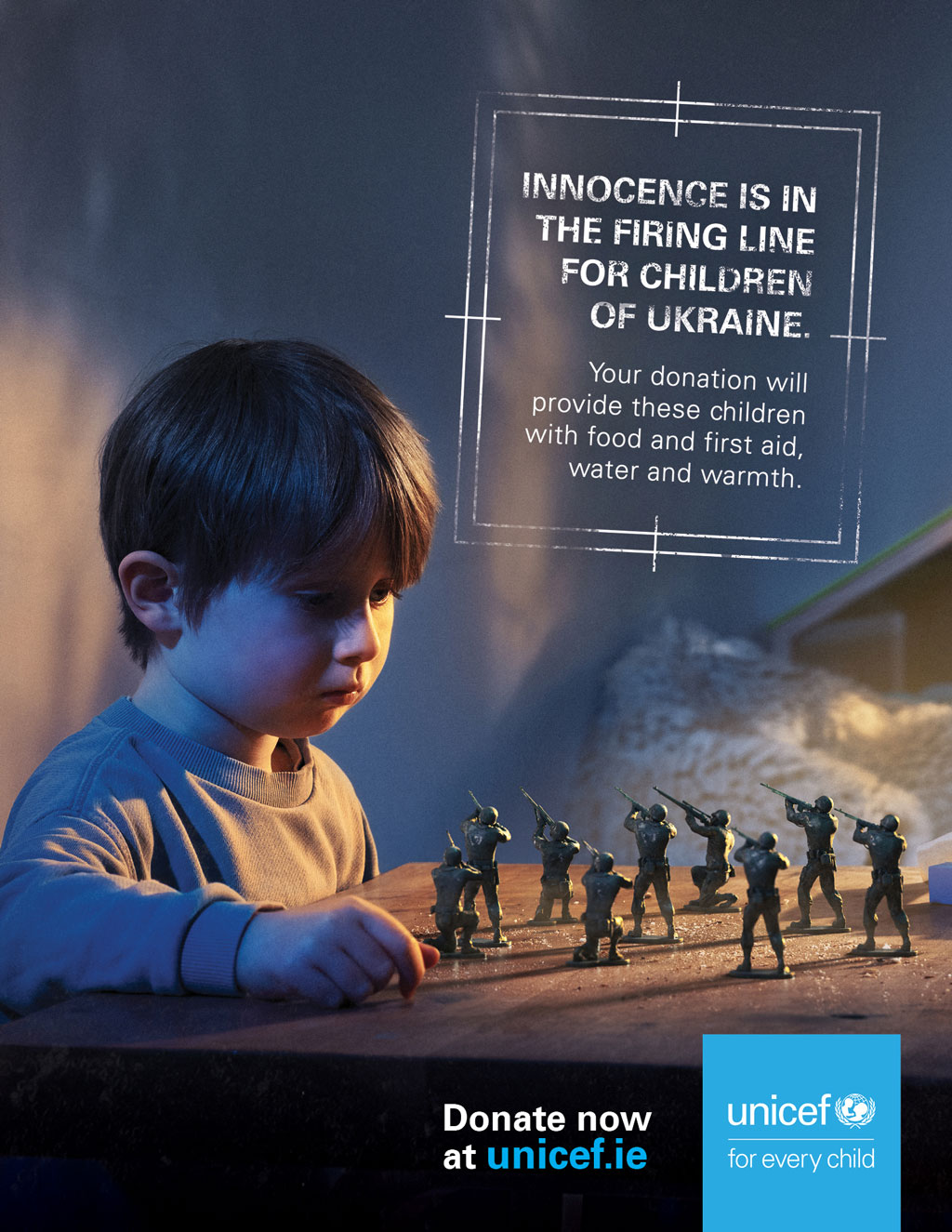