The Smile in the Mind

The world of advertising has come a long way from 1923 when Claude Hopkins, in his book Scientific Advertising that ‘People don’t buy from clowns’.

The humour effect is a cognitive bias that causes people to remember information better when they perceive it as humorous. According to a 1993 Journal of Marketing study that examined multinational effects of humour on advertising (a study that still stands true), the major conclusion was that ‘humour is more likely to enhance recall, evaluation, and purchase intention when the humorous message coincides with ad objectives, is well-integrated with those objectives, and is viewed as appropriate for the product category. Under such circumstances, humorous advertising is more likely to secure audience attention, increase memorability, overcome sales resistance, and enhance message persuasiveness.’ Supporting this our Creative Elements research shows that the ‘appropriate’ inclusion of humour in OOH can increase memorability and brand effects including advocacy and consideration. Here are a few campaigns and around the world and closer to home which took on the challenge. 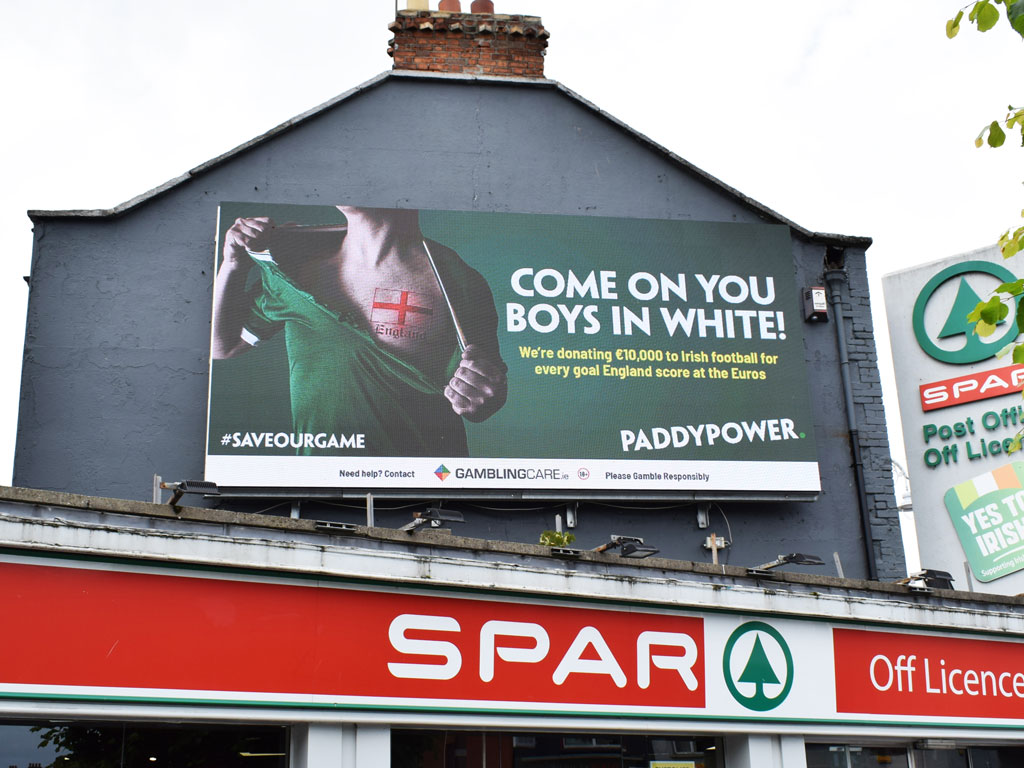 Despite our failure to qualify, Irish football still had a keen interest in the outcome of Euro2020, thanks to an innovative initiative by Paddy Power mischief department. For every goal that England scored, the bookmaking firm pledged to contribute €10,000 to grass roots Irish clubs. Kane & Co netted 11 times over the course of the tournament. But in a final twist, the sum was paid out in pounds Sterling, as a nod to the performances of Raheem on the pitch. 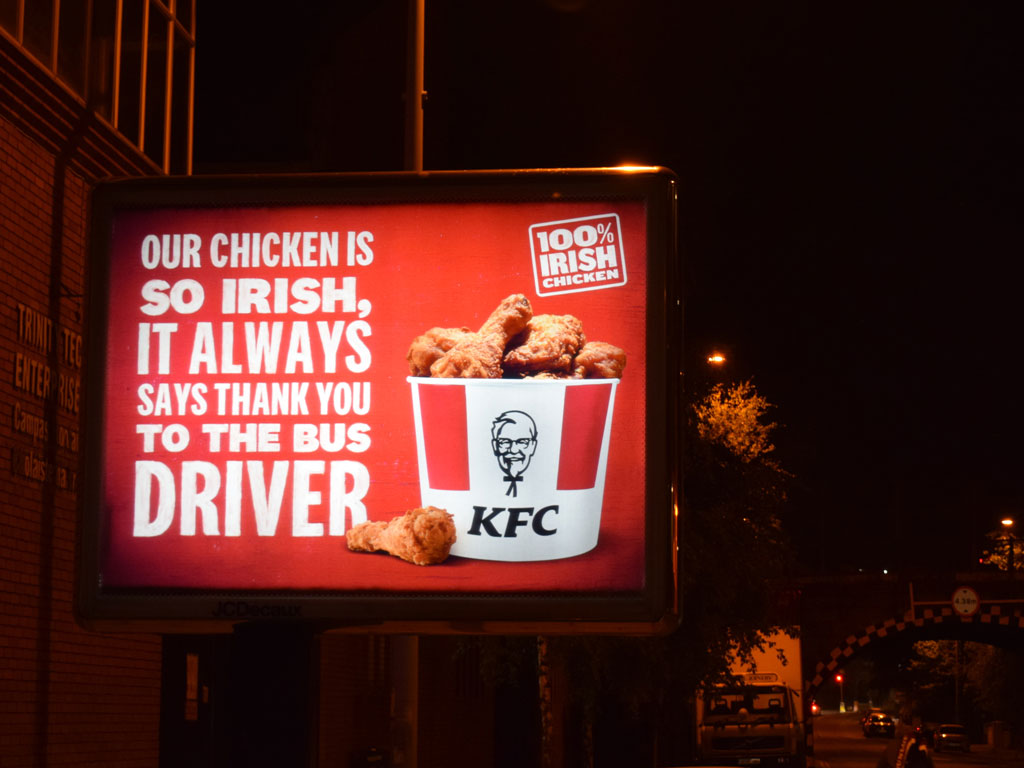 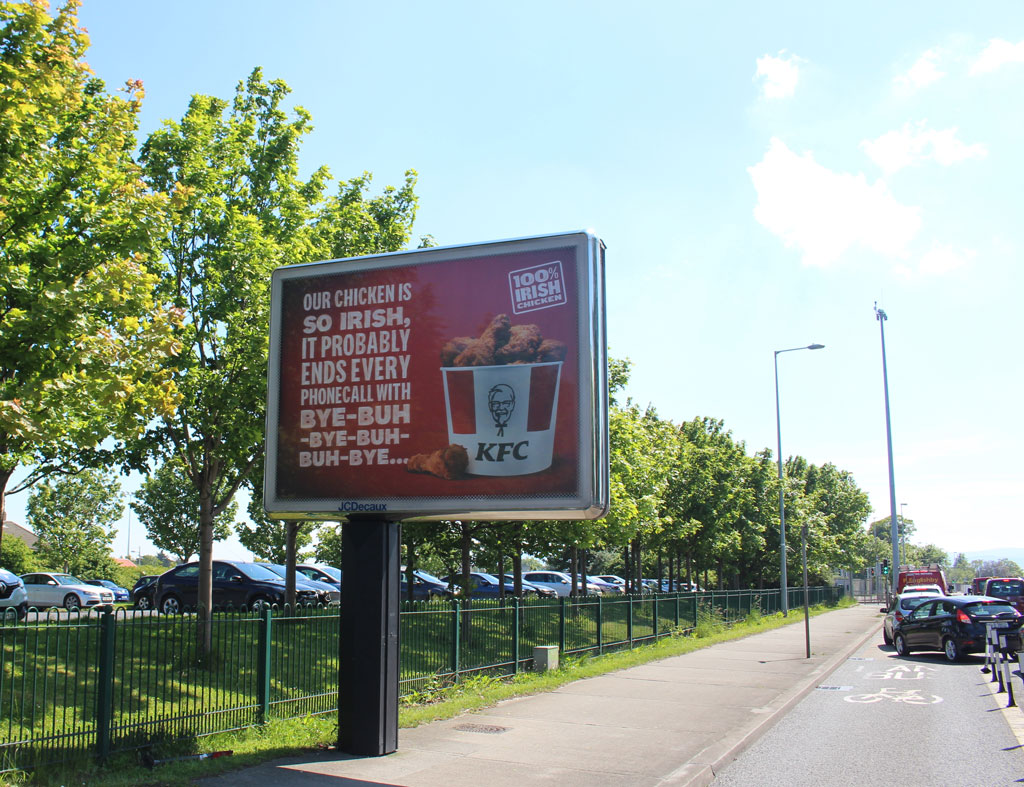 KFC also played with our sense of Irishness with a series of billboards which communicated product sourcing in a light-hearted way.

The tone is reminiscent of the ‘hands-up’ FCK campaign run by the brand following a supply issue in the UK. Rather than run around like headless chickens, KFC’s marketing and communications team, with the help of their agencies Mother and Freuds, turned an epic cock-up into an Cannes Lions award-winning communications campaign – one that has been described as a “masterclass in communications” by Frank founder Andrew Bloch.

Research suggests that a tangible way to spot a self-aware leader is by looking for a self-deprecating sense of humour. People that can admit to their failures or shortcomings with a smile are more approachable. Some may think that admitting to failures or faults reveals vulnerability, but conversely, it’s often an implicit show of confidence. The same applies to brands. Acknowledging weaknesses in a light-hearted way can cement one’s strengths in the mind of consumers and build trust. Laugh and the world laughs with you. 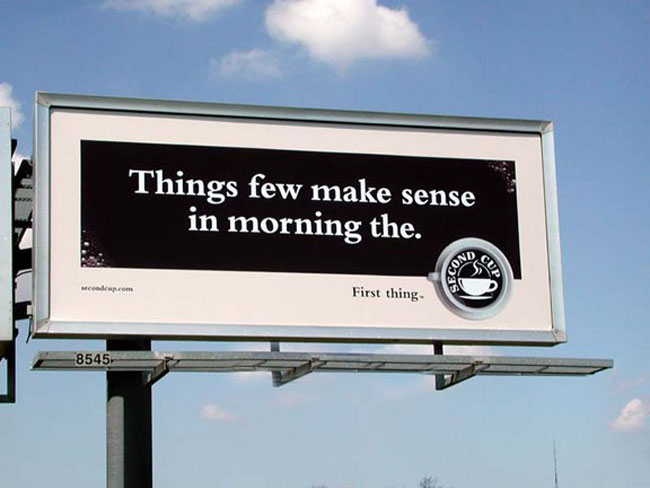 Distorting expectations to create intrigue can resonate with consumers in this one to many medium. In a twist to ‘You haven’t had your Weetabix’, Canadian coffee shop brand Second Cup played with morning commuters through a garbled message. 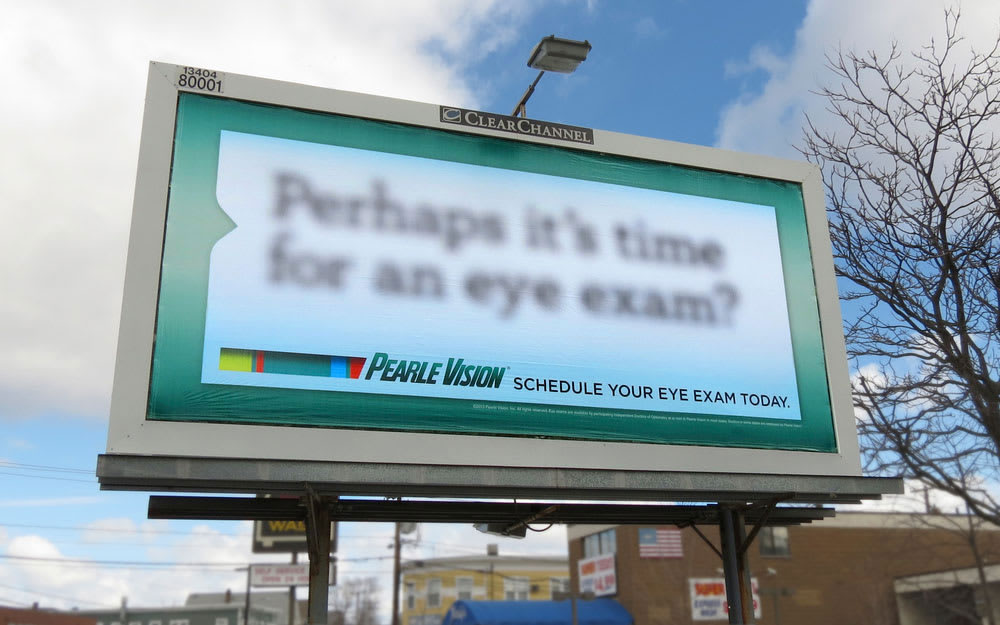 Ignoring the usual norms around legibility, Pearle Vision challenged the audience to focus on the message, with the resulting reveal delivering the message in a contextual rewarding way. 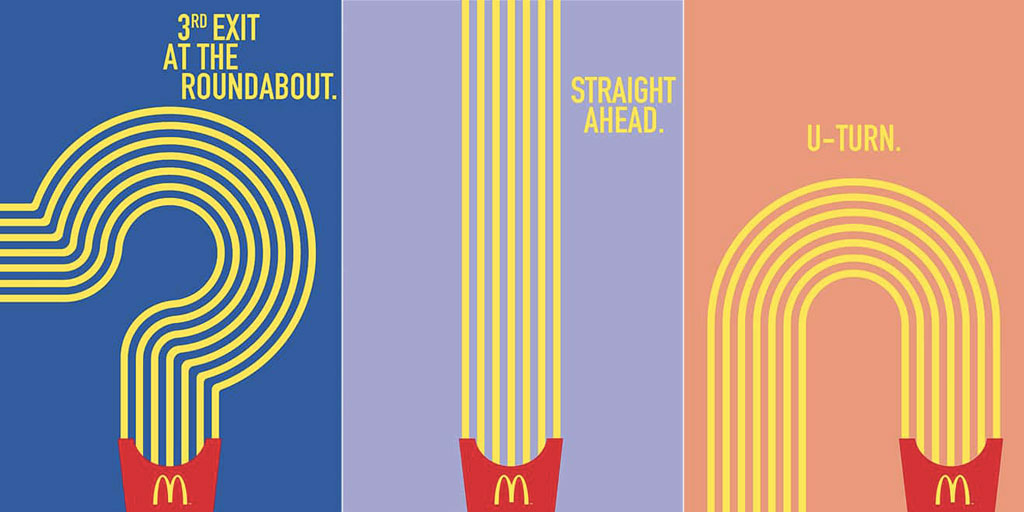 McDonald’s used its fries to guide patrons to the nearest location in these fun artistic minimalism ads by TBWA\Paris. Directional signage need not be boring.

The Medium is the Message 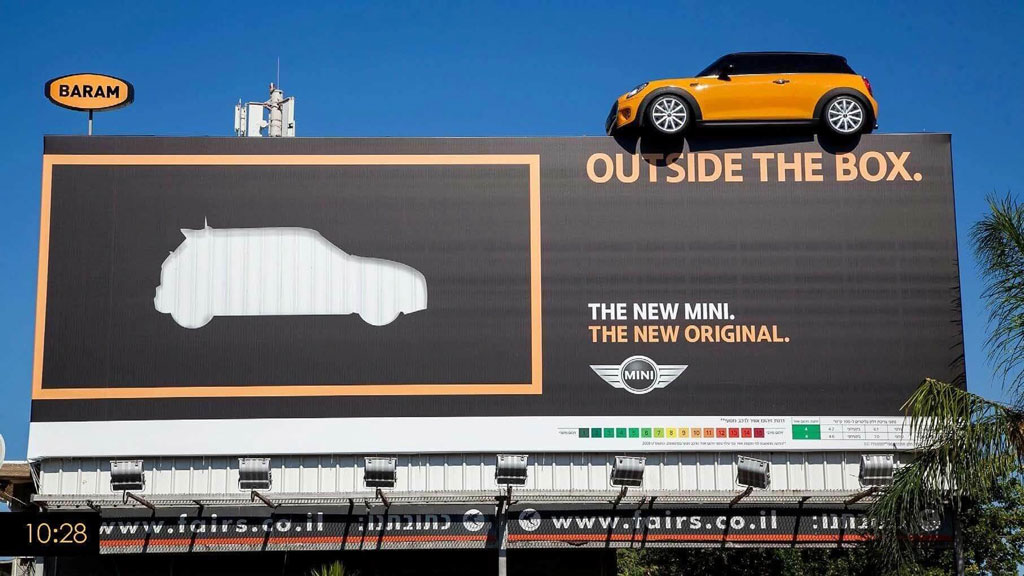 By thinking outside the box, Outdoor advertising need not restricted to the confines of the poster frame. Innovative techniques and special builds can complement classic OOH campaigns to add that something special and different. 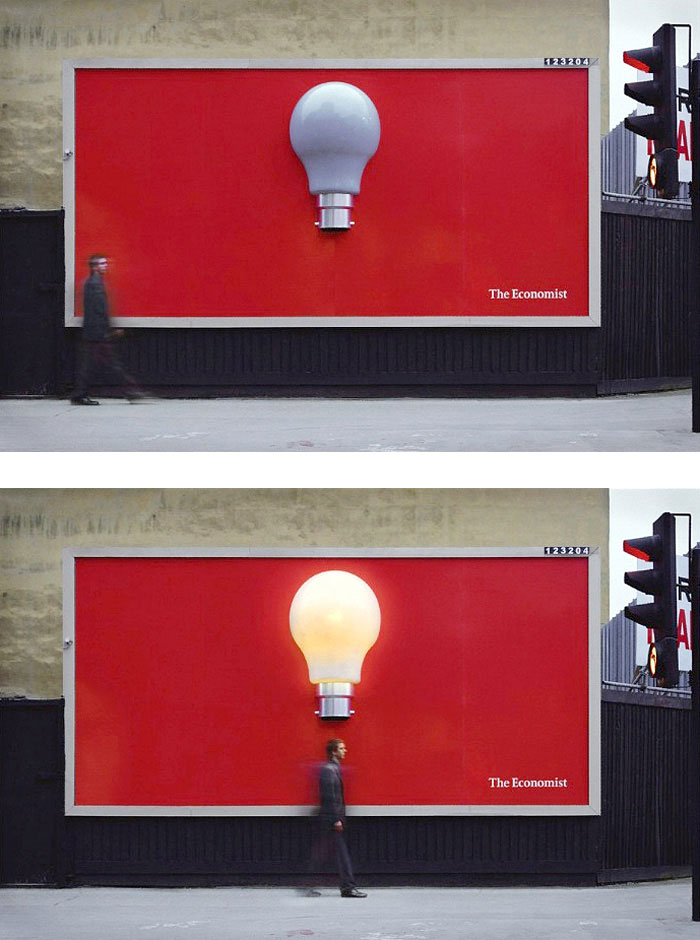 In this execution a giant light bulb turned on when someone walks under The Economist billboard. What a way to compliment the audience. 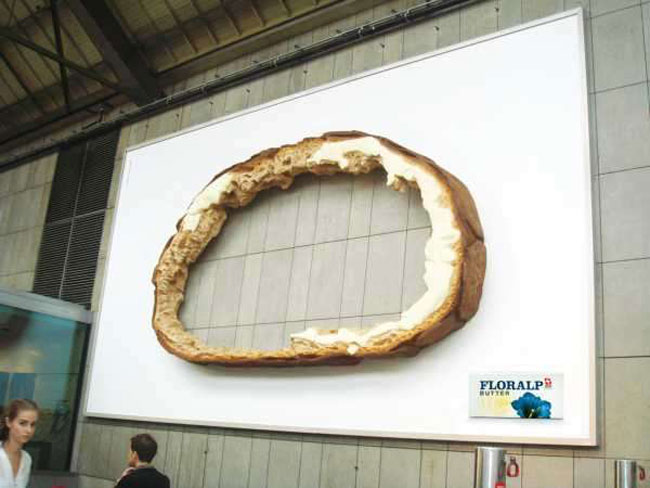 This 3D Floralp butter billboard from Switzerland showed a giant piece of crusty bread with its interior missing. As well as reviving childhood memories for many this poster conveys appetite appeal in an amusing way. 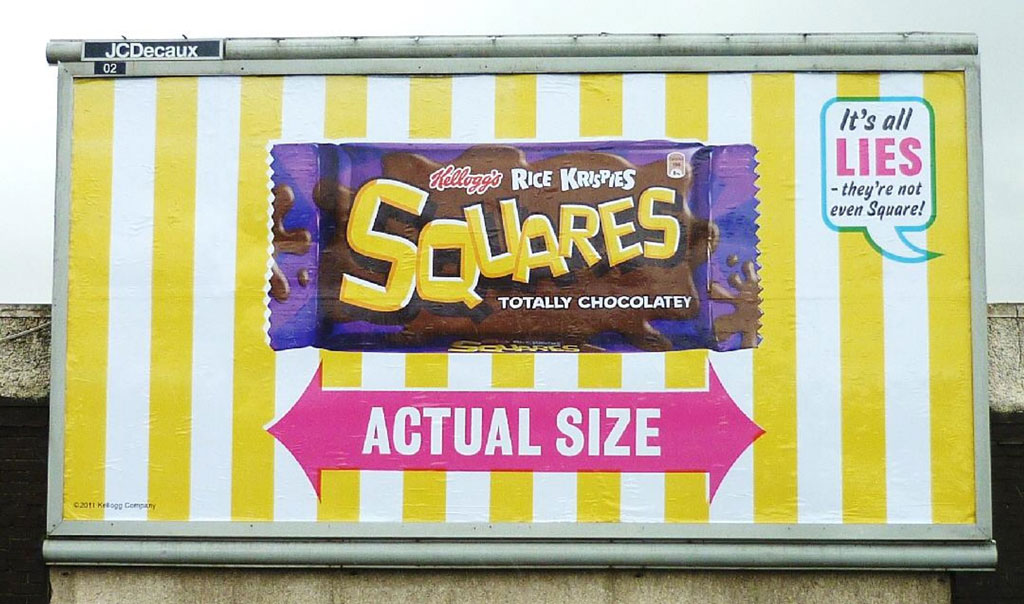 Kellogg’s utilised the 6x3m proportions of a 48 Sheet to communicate alleged product USPs in a very unserious way. 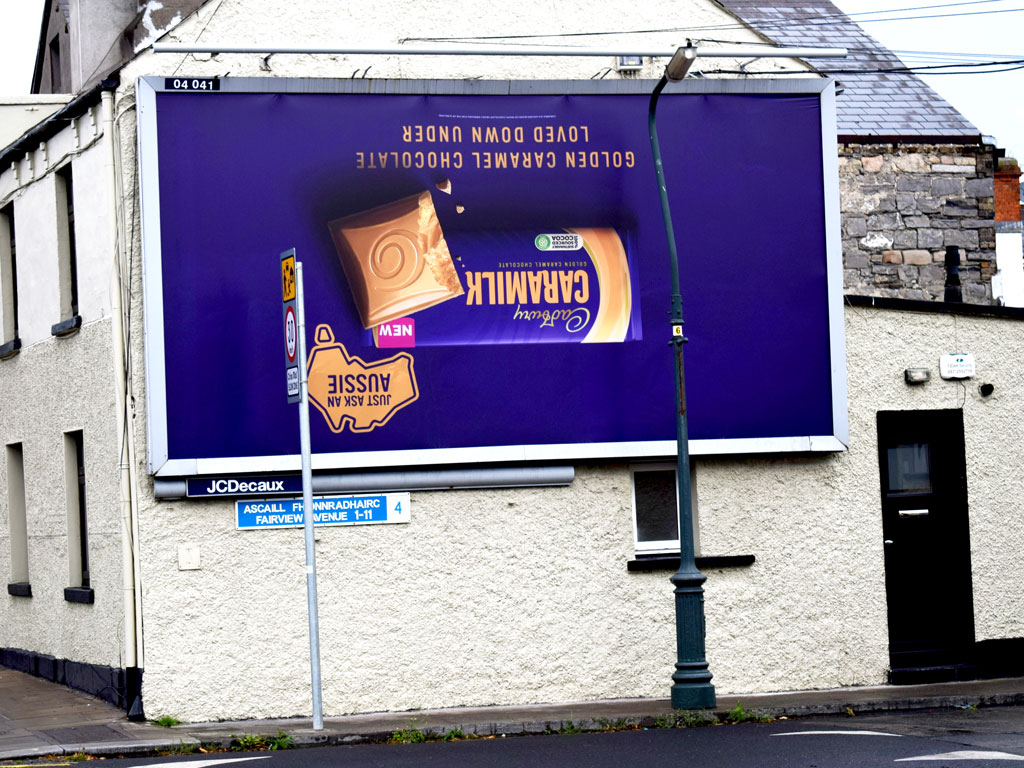 When the much-loved Australian chocolate classic, the Cadbury Caramilk bar arrived in Ireland from down under, Mondelez flipped posters literally on their head.

Humour is by no means a guarantee of better ads, but studies have shown its effect can be enhanced with careful consideration of objectives as well and the audience, situation, and type of humour. It can break down wall, differentiate and show personality, oftentimes elusive goals for many brands, particularly intangible ones such as services.