A new survey by IAPI has found 90% of creatives believe that Irish culture and environment contributes to the quality of creative output.

In August, IAPI canvassed creative talent at home and abroad for its inaugural survey. The aim? To gain an understanding of how creative professionals in the commercial creativity and communications industry in Ireland are feeling about a number of issues, which include the quality of work being produced, to how they feel about working in Ireland right now and whether living here influences their creativity.

The research was carried out in collaboration with The Irish Times as part of the “Ireland: Where Creative is Native” initiative aimed at promoting Irish commercial creativity at home and abroad.

The results are now in, and with 225 responses in total, survey respondents come from all echelons of the industry. 225 Respondents completed the survey, the majority (81%) were Irish, working in Ireland. 2 out of 3 were senior creatives and, the remaining 1/3 were junior to mid-level.  50% work for full service creative agencies, 18% either work in marketing teams or in-house agencies, with the remaining half spread across other agency types.  56% were male, 42% were female with 3 identifying as gender fluid.

A strong overall sentiment from the survey results is that of pride. Sixty two per cent of respondents said they were they were either ‘very proud’ or ‘proud’ to be working in the Irish commercial creativity industry. 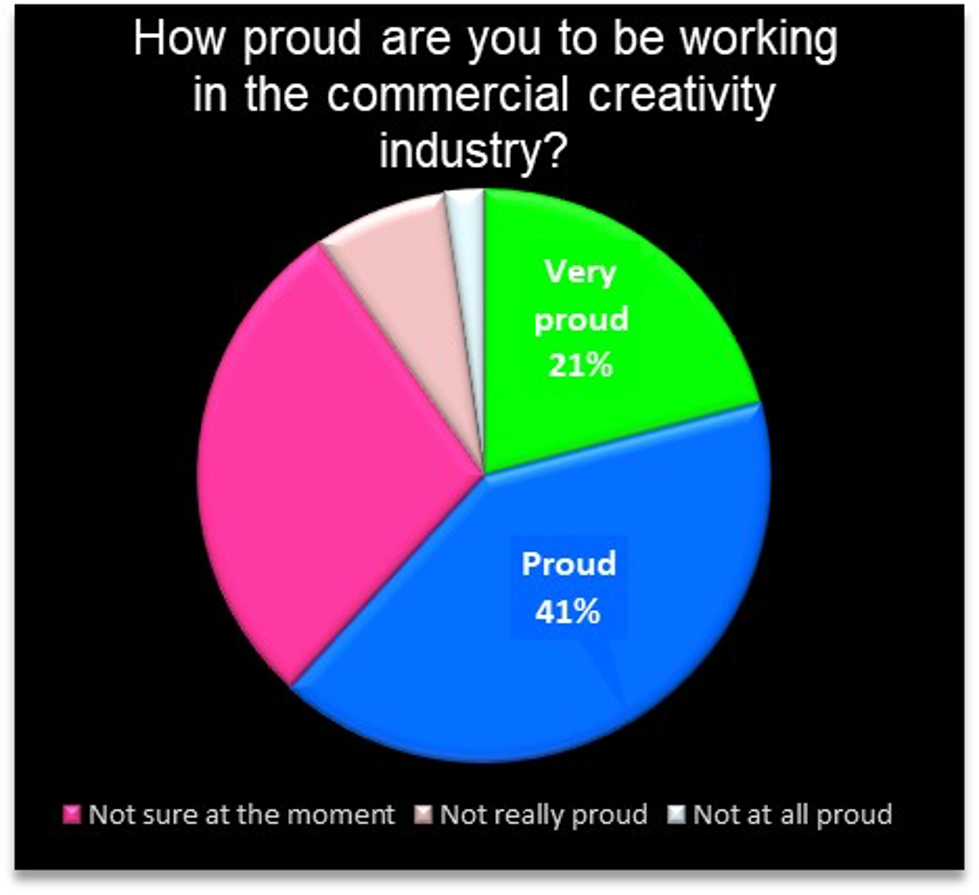 “Irish creativity is showing a pride in Irish culture and heritage right now. It wasn’t always the case, and is a positive sign of our growing national awareness and confidence,” commented one respondent.

68% of respondents said the quality of creative work being produced in Ireland’s commercial creativity sector right now is good to excellent.  28% said it is average, and only 3% rated it as poor.

“On the up, going from strength to strength, not far from excellent,” was one respondent’s comment.

Another, offering a balanced view, stated, “A couple of agencies are pushing for great work but it can be extremely tough to get it created”.  Some think the pandemic has had an effect on the creative process. “Working from home has certainly had an effect of watering down some of the stronger creative ideas over the past 16 months,” said one respondent. 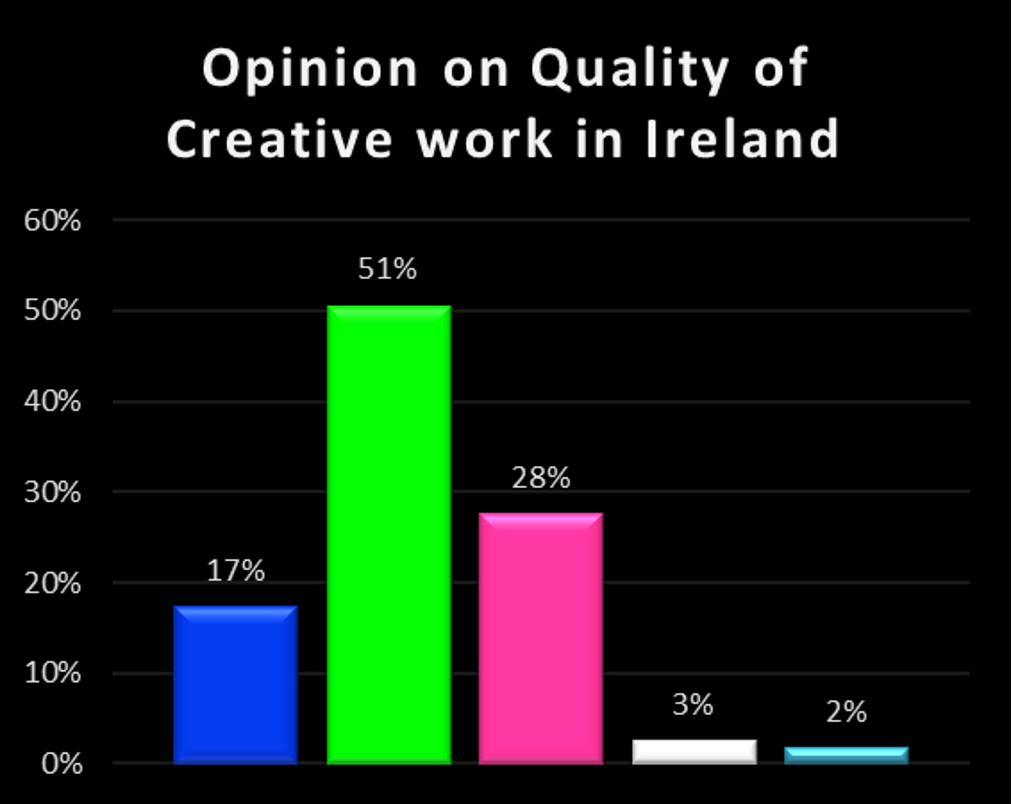 [To discover all the insights from IAPI’s 2021 Ireland’s Creative Influence survey, visit

“I think Irish people are passionate about their Irish culture and heritage and it comes across in the work. There is always room to see more diverse insights and stories coming through, say from different communities within Ireland,” said one respondent.

Respondents were keen to point out that notions of Irish culture have changed. “The environment, i.e. cost of living in major cities and low salaries drives down the quality of creative output,” said one, with another commenting that, “though we are influenced by Irish culture, we are living in times where the prevalent culture is global.”

Of those innate aspects of Irish culture that stimulate commercial creativity, it was our irreverent sense of humour that came out top for the survey’s respondents with 60 per cent of them citing it as their top stimulus. Writing skills honed down the years, inherited and learned from literary greats, came in at 31 per cent. Ireland’s progressive society was also a factor for many, with 36 per cent citing it as a stimulating factor. 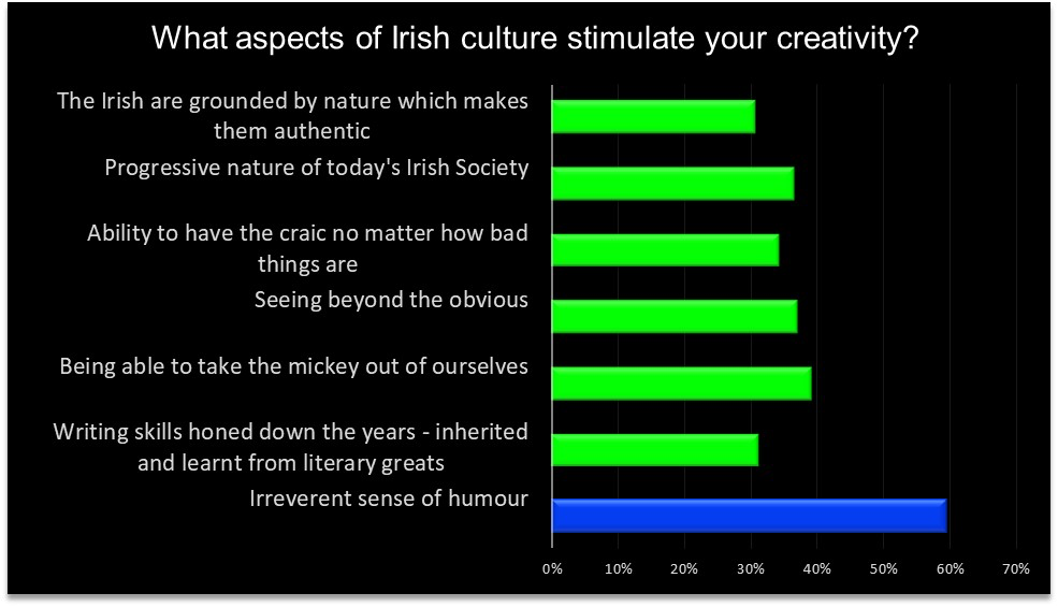 The country’s small size came under the lens too in both a positive and not so positive way. 37% feel that the ability to effect societal change quickly in a small market means that they have to be highly creative.  Another 1/3 feel that brands can test or take a chance here with their consumers that they wouldn’t be prepared to do in larger markets. 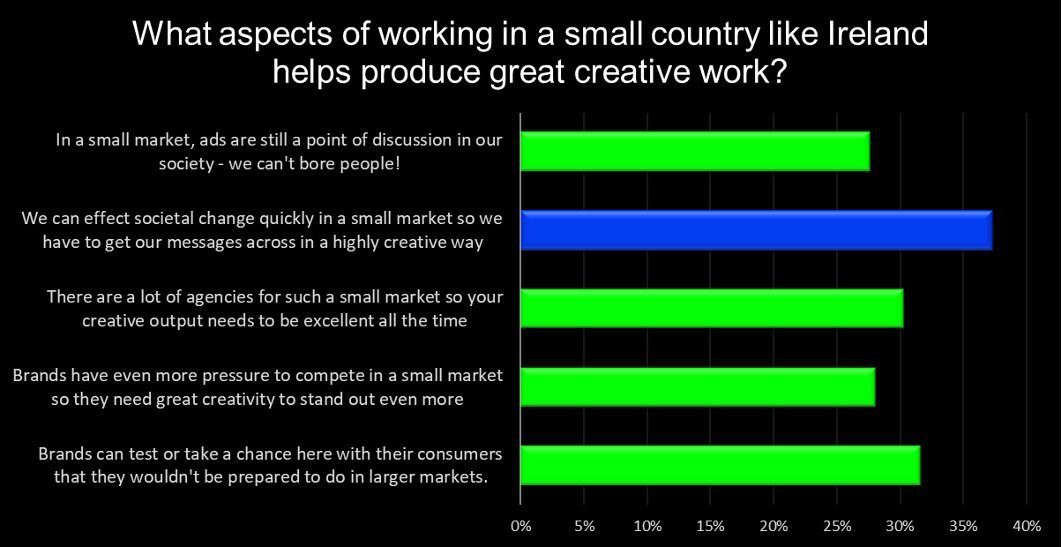 “Ireland has access to brands and accounts that creatives in other regions of the world wouldn’t get to touch. There are masses of opportunities in that sense,” said one creative respondent.

However, creatives also feel there are negative aspects of creating in Ireland with 75% of the creative respondents feeling that clients wanting to play it safe hampers their creative output. 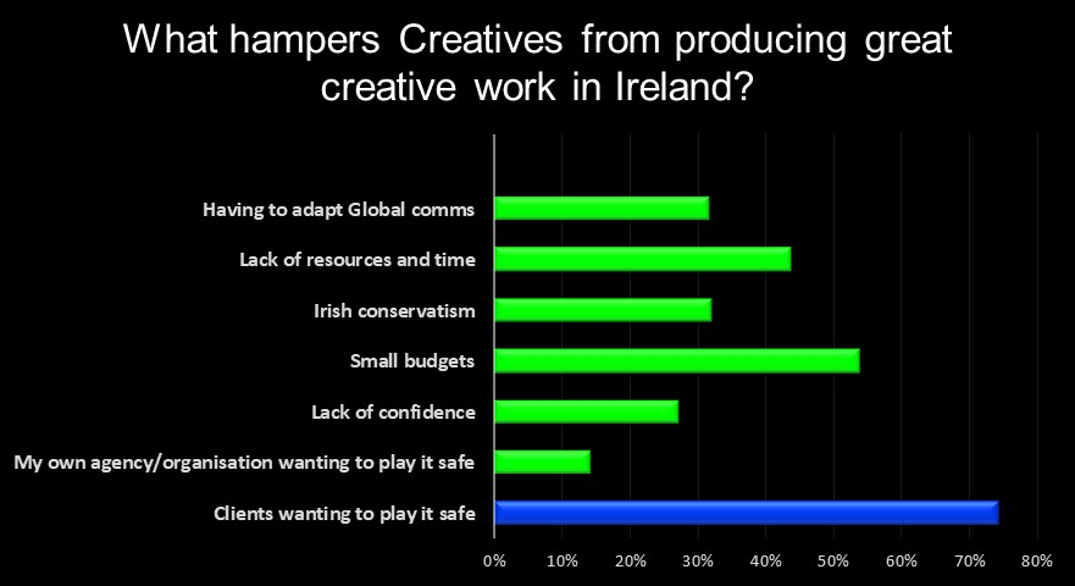 “It is the role of the Creative talent in our industry to push for the best possible creative interpretation of the brand’s message and they should be lauded for that.  IAPI’s view is for the industry to continue to push for greater creativity, within the framework of the brand and business strategy.” says Charley Stoney, CEO, IAPI.  “Effie Awards Ireland is designed to encourage just that.  Through the participation of Irish practitioners in global Effie programmes as well as through entry to our own awards, the education process is starting to gain traction. The emphasis is on “effective creativity”.  The more we demonstrate the power and effectiveness of great creativity, the more leeway we will be given to push the creative bar.  We look forward to raising that bar even further over the next few years”.

As with all industries, the commercial creativity sector is seeing high levels of Talent Churn as the “great resignation” continues.  25% of respondents stated that it is more difficult than ever to find creative talent. Nearly half simply state that it’s the same as ever as finding great creative talent has never been easy.

A hot topic for many, is the move into big tech with several creative folk moving into big tech firms so we asked creatives their views on this:

“It was really encouraging to see such a large take-up of respondents to Ireland first creative influence survey’, said Sean Hynes, Vice President IAPI and Creative Director at Bonfire. “It continues to demonstrate the ownership that creatives feel they have over our creative industry and the belief they have in the energy and originality of our creative output.

The work we are doing to promote Irish creativity and media planning internationally is starting to pay off and our ambition to create a European centre of excellence for the industry doesn’t look so far away now. It is heartening to see that 40% of the creatives surveyed are optimistic that IAPI’s “Ireland: where Creative is Native” programme will make a difference to the quality of our commercial creativity.  This will, in turn act as a siren call for both Irish and international talent to work in all aspects of our sector.”