Sophie Hamilton, marketing executive, PML Group with this week’s Out \ Look on Out of Home.

PML Group’s Posterwatch data on the OOH medium in Ireland has indicated a rapidly improving market in quarters two and three, following a particularly tough first quarter of 2021 for Outdoor. That period was when the country experienced some of the strictest limits on movement during the pandemic. As we have reported on these pages over the past 6 months, as restrictions eased and audience behaviour changed, brands have embraced OOH as some of its fundamental strengths came to the fore again. It is that mix of scale and ability to drive response that is bringing brands to OOH again. Creating impact through classic OOH formats and combining it with digital innovation at scale is a highly effective sophisticated mass marketing method for OOH advertisers. These format and environment decisions are being underpinned by quality audience insights and location data to optimise investment and derive meaningful outcomes for clients. 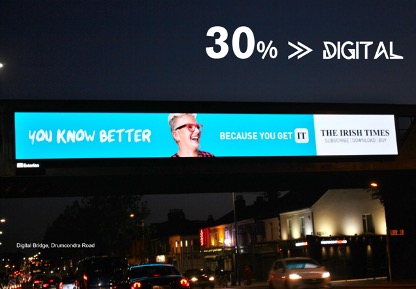 Next week we’ll be publishing our Posterwatch review of the year to date via pmlgroup.ie but today we can share the top ten advertisers and categories for Jan-Sep. More on that below but a significant statistic to come from our analysis is that Digital OOH (DOOH) now accounts for more than 30% of OOH spend by brands in the Republic of Ireland. The digital offering was enhanced in the last twelve months with the launch of new Digishelters, more large format digital panels, the digitised bridge network in Dublin and the launch of new digital phone kiosks in large towns and cities across the country. These additions have helped boost the digital share of the sector.

In terms of top advertisers, Diageo and Mondeléz lead the way, with large brand portfolios meaning both are active much of the time. Support for zero alcohol variants of Guinness and Carlsberg are among the highlights for Diageo so far, along with Outdoor backing for the extension of the Rockshore brand. Disney are firmly established in the top 10 in 2021, despite the streaming platform launching only eighteen months ago in Ireland. The brand has embraced OOH and DOOH’s flexibility and agility. Sky and Virgin Media, other prominent media brands, are also among the top 10. Long-time OOH advocates, McDonald’s and Coca Cola feature strongly again. 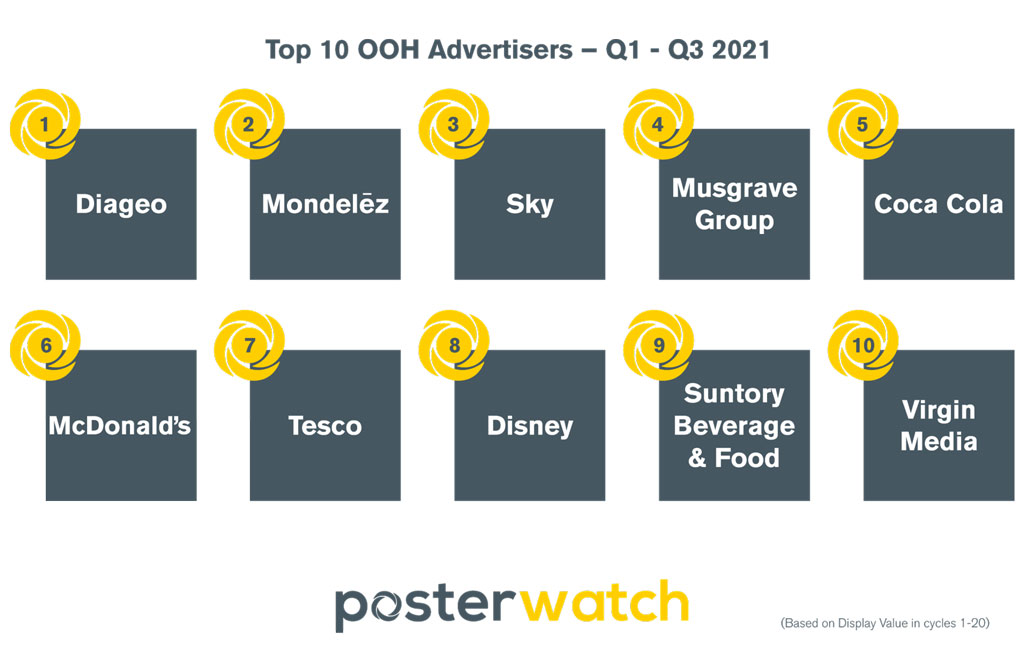 Supermarkets feature among the top ten advertisers, in the form of Tesco and Musgrave Group (Supervalu and Centra), and these, along with online and offline retailers take the category to number one for the year to date. Retail has a 16% share of the OOH market, compared to 9% for the Beers category in second place. Confectionery is high on the list with Mondeléz, Nestlé and Tayto using roadside and retail OOH to grab consumer attention on the path to purchase. The Finance category accounts for 7% of the market. AIB Group, Bank of Ireland, AIG and Irish Life make up more than two thirds of that category’s spend. 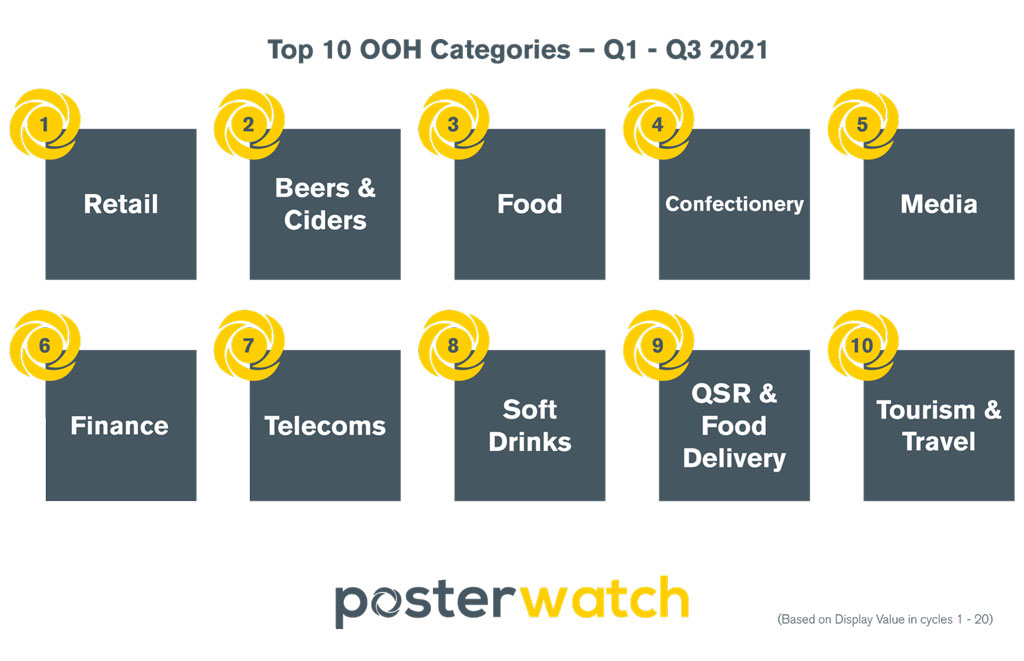 A 3D Special Build on Macken Street in central Dublin is currently showcasing the launch of Bank of Ireland’s student ‘bio’ debit card – a first in Ireland.

The enhanced billboard activation will be visiting three JCDecaux locations in Dublin in the coming weeks. The creative by Oliver features a scaled-up version the new card, which is made from 82% bio-sourced renewable materials derived from corn.

The special builds, managed by Eclipse Media, will build awareness and drive response amongst its target audience – third level students. Bank of Ireland research has revealed that almost two thirds (63%) of people in Ireland aged 18-25 have become more aware of shopping sustainably over the last year, with over half (54%) now willing to pay more for sustainable goods.

Commenting on the launch, Laura Lynch, Interim Group CMO, Bank of Ireland said, “The OOH special is an amazing platform to bring to life our BioSource card in such a creative and impactful way. We’re delighted to be the first banking brand to launch a card made out of corn in the Irish market and the OOH special really reinforces this with its fun take on our card on the cob!  Big thank you to our partners in Carat and PML who brought this to life.”

Pat Cassidy, Digital, Innovation & Experiential Manager, PML Group said: “The ‘Special Effects’ research carried out by the team at PML Group in recent weeks highlighted the hugely positive impact that special builds have on the public in terms of their perception of brands as exciting and innovative and how they are more likely to notice such advertising and share online. We are delighted that brands such as Bank of Ireland recognise this and see this opportunity in their OOH advertising. We were delighted to work with our client to communicate such an important product attribute in a clear and impactful manner.”

The recent Special Effects research study, conducted on PML Group’s behalf by Ipsos MRBI illustrates the ways in which OOH Specials that incorporate 3D builds positively impact a campaign in the minds of consumers, and especially among a younger audience, as targeted by Bank of Ireland.

Three quarters of all respondents believe Specials make a brand seem exciting. A further breakdown showed that 83% of respondents aged 16-24 years agreed in this regard. This suggests that this age category is likely to engage more with brands that incorporate specials into their Out of Home campaigns. By using specials, it paints a positive picture of the brand in the eyes of the consumer, resulting in positive brand fame. 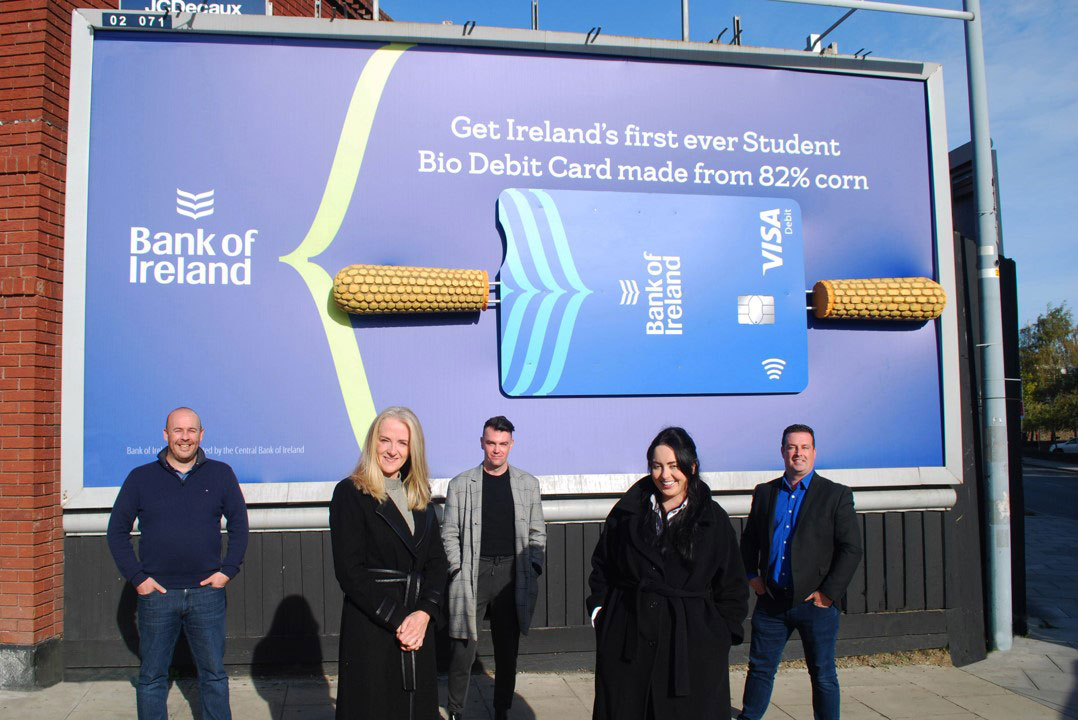 The Social Activity Measure (SAM) is a behavioural study, designed by the Economic and Social Research Institute’s Behavioural Research Unit (BRU), that surveys people about their recent activity.

The latest report presents results from a nationally representative sample of 1,000 adults who participated in the study between September 22nd and 27th – the eighteenth wave of the survey. Data collection took place shortly after the beginning of a staggered return to work starting on September 20th. Restrictions on outdoor group activities and some organised indoor events were also lifted.

The number of locations visited during the previous day and over the past week (especially) went up, resulting in a further increase in overall social activity following a drop-off during the summer holiday period. 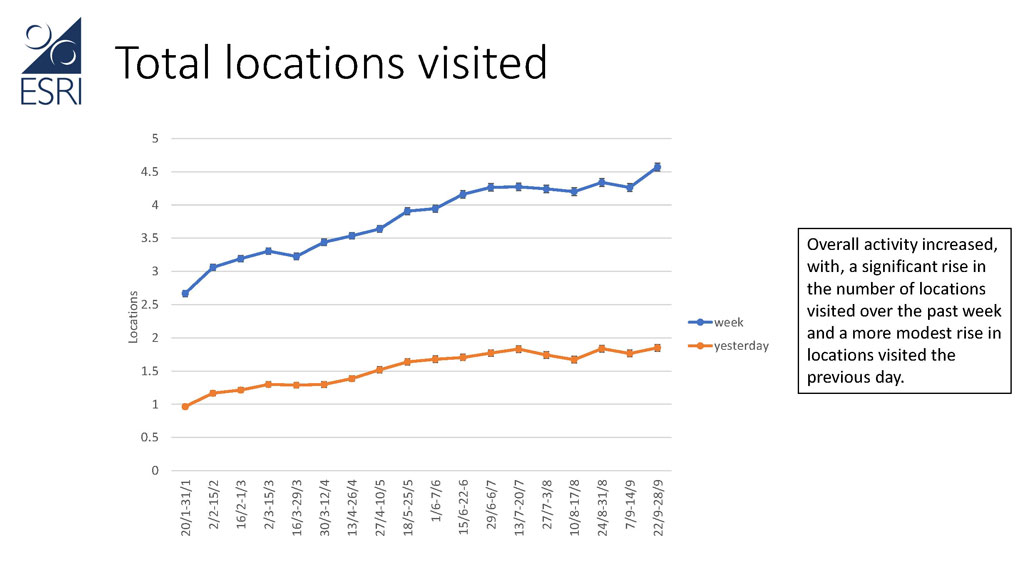 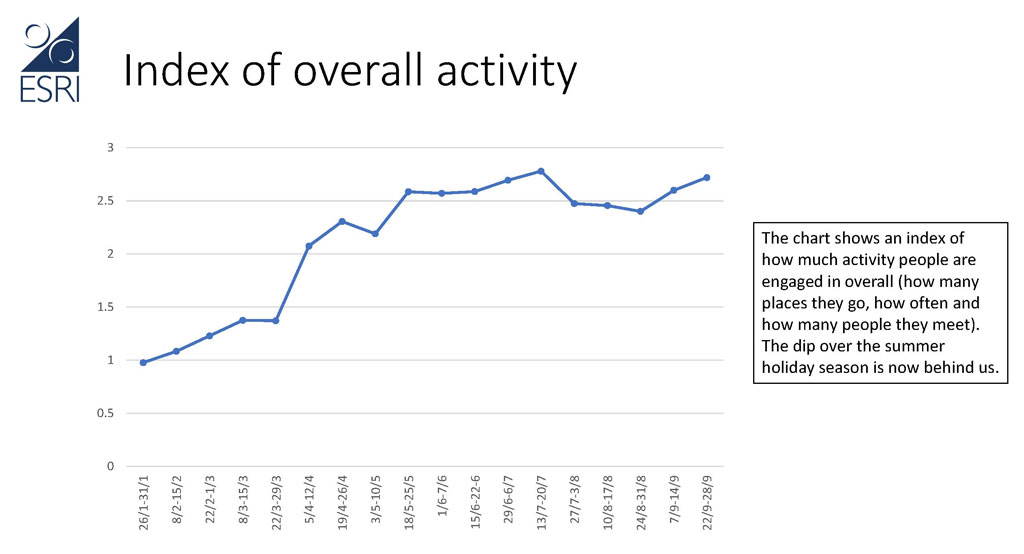 Increases in visits to retail, hospitality venues and exercise facilities over the last week were statistically significant. During the previous week, 43.6% of the adult population (62.5% of workers) went to their workplace at some point.