James Byrne, marketing manager, with this week’s view from OOH.

In Now Near Next this week we conclude our Check/Out research study series, carried out in conjunction with Ipsos MRBI. We also include the latest TII traffic data and a new proposed buyer behaviour model which looks at the non-linear and vast number of potential paths to purchase. Also included is new research from the US which speaks to OOH’s potency in the current climate.

TII’s latest traffic trend information, covering the morning period from 7am until 10am and generated from a sample of ten traffic counters located on the national road network, reports an accelerating 9% weekly increase overall in volumes on Thursday 18th February. 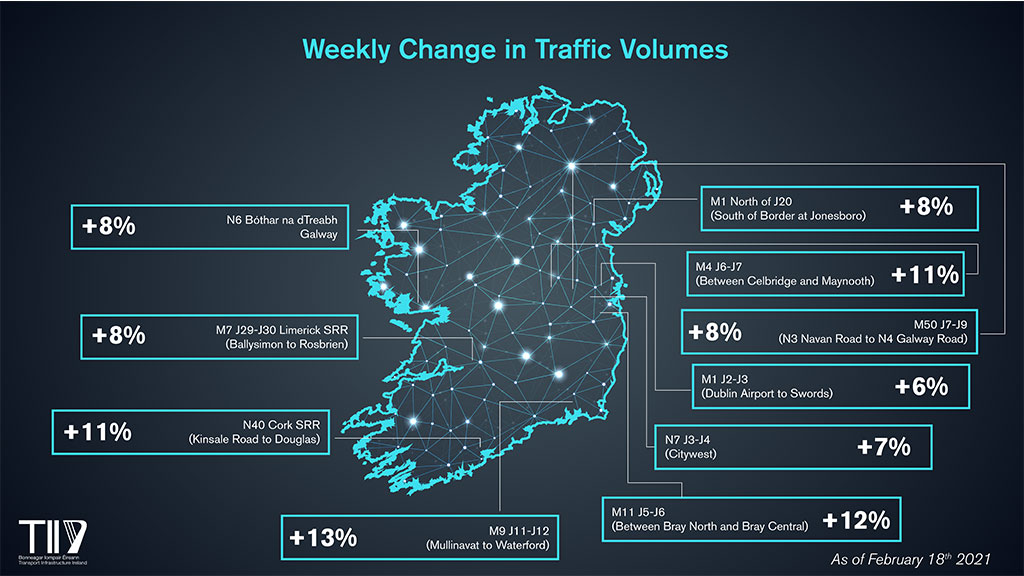 In general, there are substantial week on week increases in traffic volumes as compared with Thursday 18th February.

Examining traffic volumes on the radial routes into Dublin, comparisons with Thursday 11th February are as follows: +7% on the N7 at Citywest, +6% on the M1 at Swords to Airport, +12% on the M11 at Bray and +11 on the M4 at Celbridge-Maynooth.

This week we publish the final part of results from Check/Out, a study conducted by PML Group in partnership with Ipsos MRBI, focusing on many aspects of the shopping and home dining experience for Dubliners in 2021.

Our focus this week is on some of the motivations that will drive purchase behaviour in the next six months. The chart below gives topline findings for this week’s set of questions, with more than half agreeing that in the next six months they are more likely to focus on price than they have been. Four in ten respondents are more likely to buy locally sourced food and grocery products while a similar number will be more focused on eco-friendly and sustainable purchases in their supermarkets and convenience stores. 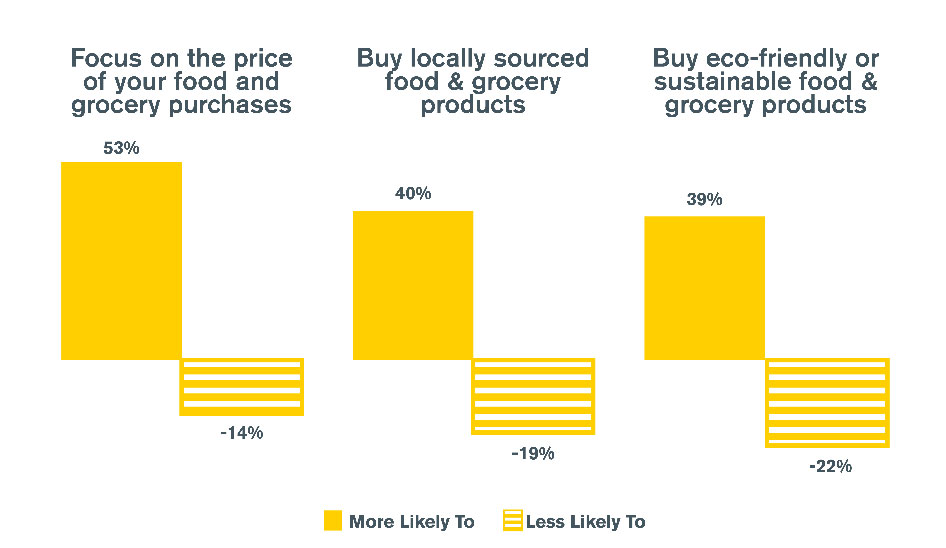 With the economy suffering and employment an uncertain variable for many families now, it is no surprise that the price of goods will be more of a focus for consumers in coming months. This peaks among 45-54 year olds, and is higher among those with children in the household versus those without (57% v 50%). Interestingly, price is more likely to be a consideration for ABC1 consumers than C2DEs, although the difference is not great (55% v 51%).

When it comes to buying locally sourced goods, there is little or no difference between gender and age groups with generally 40% of respondents being more focused on the origin of products in the next while. However, at 58%, SuperValu customers are by far the most likely to take origin into account more in the same period.

Eco-friendly products and sustainability are more on the agenda for 25-34-year olds, single people and females. Also, it appears to be more of a concern for those living on the southside of Dublin. Our ‘Green Means G-OOH’ research from November 2020 showed that 84% of consumers expect advertising to clearly explain the environmental benefits of products and that 66% are more likely to buy environmentally friendly products as a result of the pandemic.

Forget Funnels, here’s a new model for the Path to Purchase

This interlinked model allows all points to be connected to all potential decision nodes. The benefit being there are no pre-formulated pathways or directions. As each node is linked to every other node this theoretically represents a vast number of potential paths to purchase.

Here is that proposed model based on six different states or nodes. How does it work? The assumption at its core (and based on truth) is that pathways are non-linear, and this has always been the case. 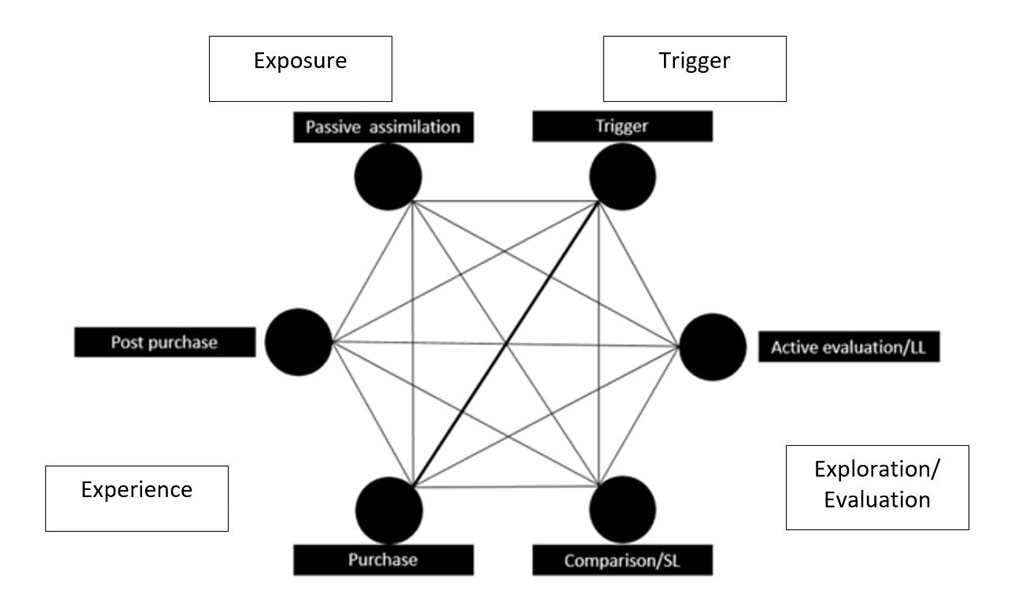 So, what does that mean? Well, simply put, a person can make their own way from A to Z any way they choose. In reality there are very few ‘fixed’ pathways and most are two-way (feedback loops and changes of mind). This model posits that an individual can start wherever and eventually make their own way to purchase, that is if they do buy in the end because not everyone always gets there. The biggest difference being that the hexagon leaves all paths open rather than forcing you a linear funnel.

Fairly general categorisations have been applied here as there are commonalities for many categories, even if these ‘nodes’ last for a micro-second.

Applying the pinball metaphor, marketers can use their investments as ‘flippers’ or ‘bumpers’ to guide people to final score (that is an extra ball) with the impact of communications acting like geometry to improve the probability you’ll score highly.

What are the implications of this for OOH? The model is supported by previous research which revealed that not only that proximity OOH delivers strong sales uplift for brands but wider locations delivering coverage also influence delayed decision making. Utilising touchpoints across environments, retail and roadside for FMCG brands for example, can affect action or in this case flip / bump consumers to that extra ball.

OOH takes on ‘new potency’ as consumers burn out on devices

A new report by The Harris Poll, commissioned by the Out of Home Advertising Association of America (OAAA), found that consumers are now keen on outdoor and shared experiences. The lockdown and the pandemic have led to a rise in digital burn out with 75% of consumers stating that excessive time on devices leads them to tune out digital device ads, a +7 points increase since September.

The report also found that consumers are more likely to be engaged with and influenced by Out of Home marketing in major urban areas. 55% of consumers who live in large cities reported that they had noticed more OOH messaging and signage in recent times in comparison to 41% of the general population. It is also interesting to note that over 34% of big-city residents say that OOH plays a significant role in their purchase decision.

OOH, particularly digital OOH, should get ready for a renaissance marked by unconventional timelines. Pent up demand is growing, especially for experiences and consumers plan on making up for lost time which means they will be less constrained by traditional calendar milestones.

But the no contact lifestyle is becoming increasingly prevalent as consumers seek to minimize activities seen as unsanitary and potentially risky to their health. It’s critical to be “touchless” ready across all channels – physical and digital. Marketers will be searching for the right balance of contactless yet with a human touch.

Coillte reveals visitor numbers to some of its most popular recreational forests have doubled to tripled since lockdown began last year, depending on location. 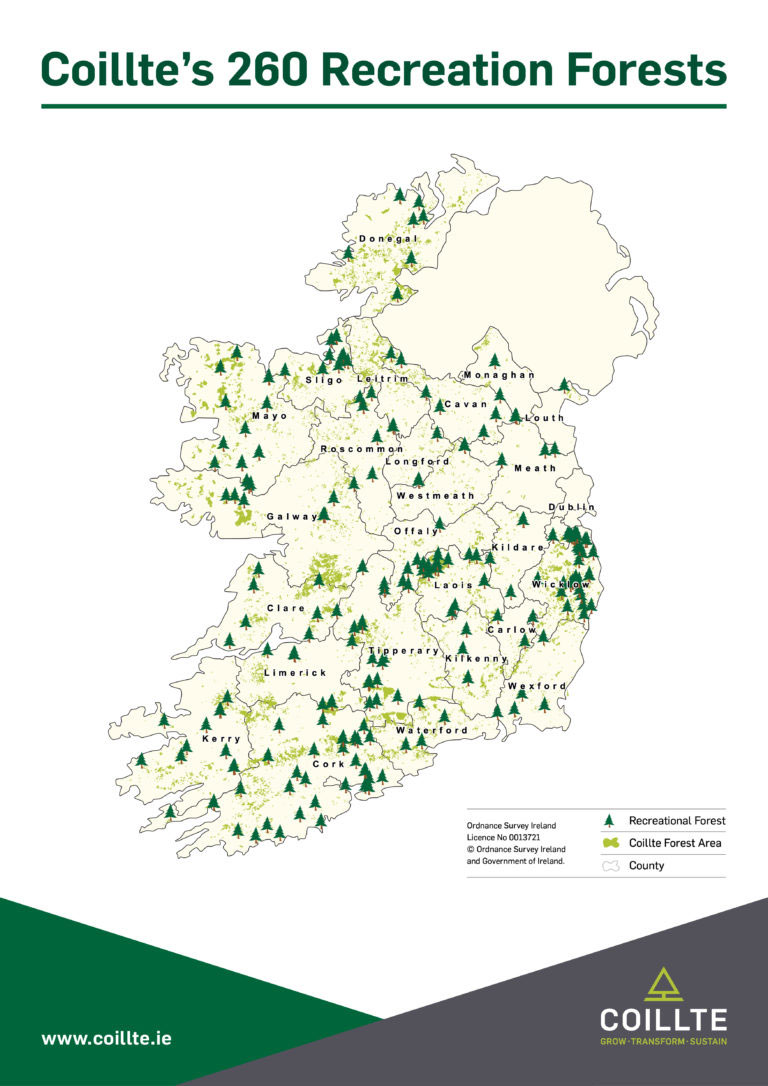 Overall, visitor numbers to the country’s top 50 forests were 2.2 million from the beginning of March to the end of December 2020.

As Coillte has c.6,000 forest properties, the number of visitors across the nation’s forests is a multiple of this.