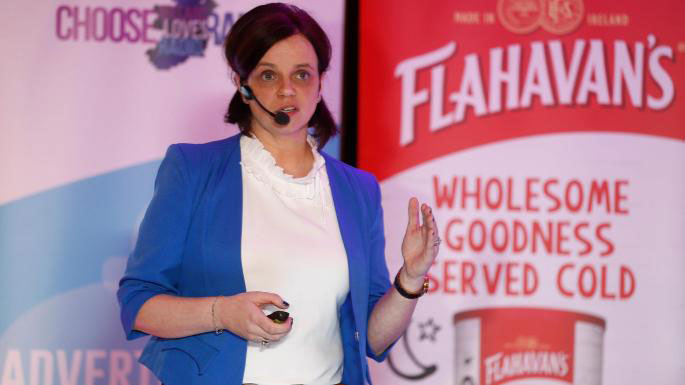 Gabrielle Cummins, chairperson of Choose Radio and CEO of regional radio station Beat 102-103 picked up the Outstanding Achievement Award at the IMRO Radio Awards which were held last week in Kilkenny.

The Outstanding Achievement Award honours a single achievement, be it an event, initiative or other which has had a significant impact on the radio industry.

Choose Radio is an IBI-led industry group which promotes radio as an advertising medium. Its launch marked a significant development in Irish radio when for the first time, all Irish radio stations joined forces to highlight the benefits of radio advertising.  Under the guidance of Cummins, Choose Radio has “focused its attention on the provision of facts, statistics and evidence that advertising on radio works. Its message is aimed at advertising and creative agencies, brands and clients and it provides concrete proof to them that they should include radio in their planning.”

According to John Purcell, chairman of the IBI: “Choose Radio is the first time that all radio stations in Ireland have joined forces to improve the commercial position of their own stations through joint initiatives and events. Choose Radio would still be a good idea if it were not for the leadership of Gabrielle Cummins. She has given her time, energy and enthusiasm willingly for the benefit of radio stations throughout the country. Her relentless efforts to organise, structure, plan and execute the multiple initiatives of Choose Radio are impressive but they are second to her ability to bring competing radio stations to the table, convince them to work together and get the radio industry to support the entire initiative. This alone is an outstanding achievement but to succeed with the Choose Radio project when so many doubted its formation is truly impressive. Watching the increasing growth and influence of Choose Radio on radio stations, advertising agencies, clients and brands cannot be called anything other than an Outstanding Achievement”.

The IMRO Radio Awards took place in the Lyrath Estate Hotel and were attended by 600 radio personnel from around the country.

According to the chair of the IMRO Radio Awards committee , Tom McGuire: “ The opportunity to recognise and honour excellence in radio broadcasting across the island is what the IMRO Awards gives the industry.  The reach of radio in Ireland is up there with the highest internationally and that’s a tribute to all programme makers and a loyal audience. Long may the wireless continue to have the ear of the nation.”

A full list of winners can be viewed at www.imroradioawards.ie