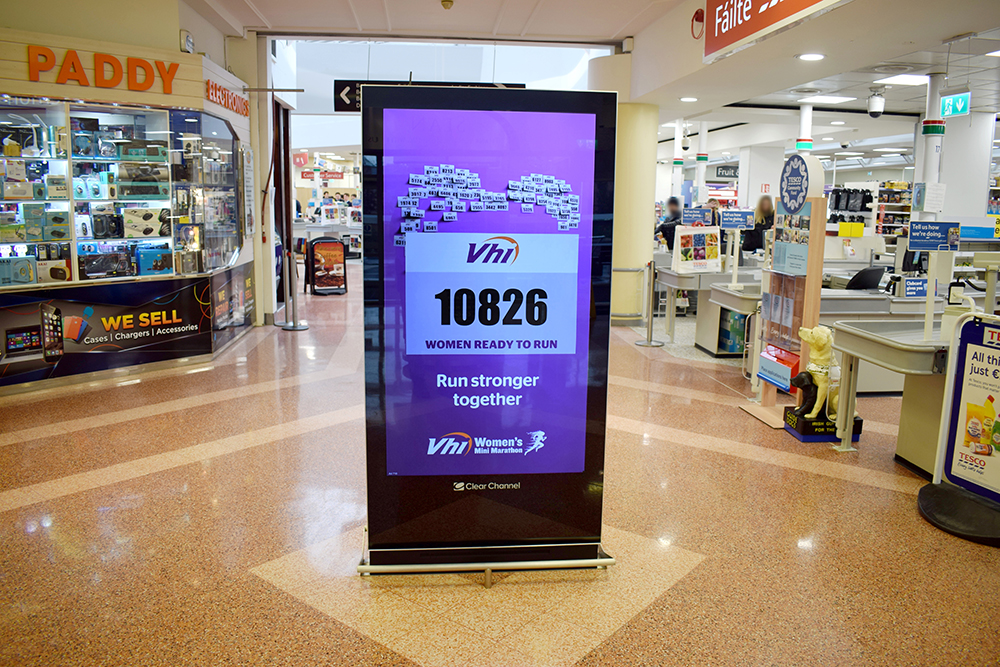 It’s time to dust off the runners and round up the girls ahead of one of the biggest dates in the summer calendar, the Vhi Women’s Mini Marathon. As preparations continue, Vhi has launched a Dynamic Digital OOH campaign encouraging the women of Ireland to sign up for the event, which is now in its 5th year of Vhi sponsorship.

Using Dynamic scheduling exclusively across Clear Channel’s digital portfolio of Adshel Live and Tesco Live, Vhi has integrated a count-up trigger into its campaign which populates the screens with a count-up of participants signing up to take part in the event.

Data is ingested into PML Group’s Dynamic platform with the display counter updated every 15 minutes with a rolling figure of ‘Women Ready To Run’. Focused on broadcasting nationally in the retail environment, Dynamic scheduling allows Vhi to create anticipation and encourage women from across the country to take to the streets of Dublin for the Women’s Mini Marathon on 2nd June.

The campaign was planned and placed by Spark Foundry and PML, creative by Publicis with the dynamic integration handled by PML Group’s in-house Dynamic team.

According to  Jennifer Prendergast, Senior Account Manager in PML: “Vhi’s first Dynamic OOH campaign capitalises on the full benefits of the medium. Using both environment targeting and engaging messaging has enabled Vhi to be disruptive when communicating with busy consumers. The campaign delivers on key objectives for Vhi as it builds awareness in key locations, enhances interest and marks the event as a must attend, encouraging sign-ups as a result.“

Orla Caffrey, Marketing Communications Manager, Vhi said “We’re delighted to have the opportunity to bring this digital out of home element to our Vhi Women’s Mini Marathon campaign. We hope the campaign will encourage women to Run Stronger Together on June 2nd”.