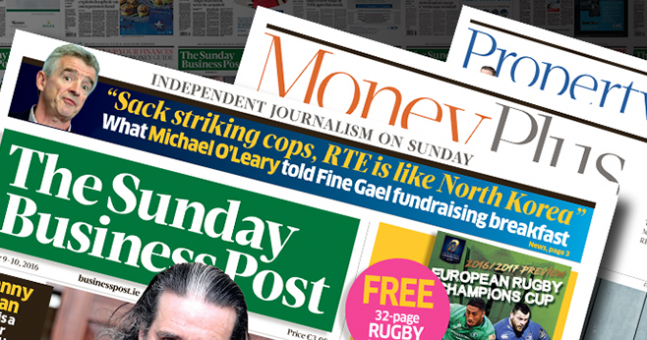 The Sunday Business Post has been sold to Kilcullen Kapital Partners for an undisclosed sum, drawing a close on a protracted sales process which began over a year ago by when its owner, Key Capital, put it on the market.

Kilcullen Capital Partners is the investment vehicle for entrepreneur Enda O’Coineen, a former journalist and publisher who later went on to invest in a number of successful businesses in eastern Europe.

According to Siobhán Lennon, Chief Executive of the Sunday Business Post: “I am delighted that the sales process has been concluded and want to thank everyone at Key Capital. Also I would like to pay tribute to the team in The Sunday Business Post for their commitment to championing Irish business and promoting independent quality journalism. We look forward to our future with the Kilcullen Kapital team and driving The Business Post on to its next exciting phase.”

The Chairman of Sunrise, Conor Killeen, said that the company and Board is delighted to pass on a strengthened, broad based media brand to a determined buyer with ambition to further develop the business. “The Sunday Business Post is an important part of society in Ireland and will continue to be valued for its excellence and independence, under the leadership of Enda O’Coineen and Kilcullen Kapital Partners. The new owners demonstrate a sound understanding of the sector and the opportunity for the brand. We are genuinely delighted that they won a thorough, competitive process,” says Conor Kileen of Key Capital.

Kilcullen Kapital Partners’ Chairman, Enda O’Coineen said “the opportunity to build on The Sunday Business Post’s growing market share in print, digital journalism and events is at the early stage of its potential. We have a brilliant publication under the leadership of CEO, Siobhán Lennon who has the best independent team of journalists in Ireland and a very strong commercial team. This young, able team shares a desire to succeed in all aspects of the business. We look forward to getting to know everyone involved better over the coming weeks and continuing to build on the foundations laid by those who have promoted quality and independent journalism in Ireland.”

A successful businessman and former Irish Times journalist, author and magazine publisher, O’Coineen has been active in a range of investments in the technology, energy, and finance sectors. Most recently he completed a solo circumnavigation of the World in the Vendée Globe sailing race on his 60-foot yacht Kilcullen Voyager.