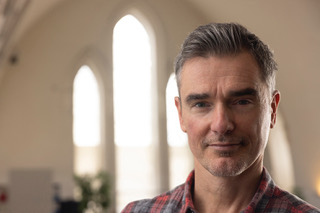 As the years progress I find I bore easily. If my attention hasn’t been piqued quickly then I tend to drift, maybe it’s late onset ADD?! I typically have a lot going on: work life, home life, social life, online life etc, so like many of us, my attention is in demand, if something hasn’t engaged me pretty quickly then – next!

So when I think about work that I wish I’d done, it’s typically work that has grabbed my attention, held it with a firm grip and left a lasting impression, which is a testament to the first piece of work that I’ve chosen, which is from 18 years ago for The Big Issue.

I remember when I first saw it, I thought it was note perfect – from the gritty realism of the art direction, to the casting, production design, editing, soundtrack and most importantly – the message. The next time I saw a homeless person begging I was compelled to think about the circumstances that had brought them to this point. And that’s the point of advertising, to change thinking, to compel someone to rethink or re-evaluate, whether that be their choice of washing powder to their opinion on social issues.

This next ad is an epic 2-minuter for Australian beer Victoria Bitter. For an ad this long to hold your attention, it had to be funny, it had to be visually amazing, and it doesn’t disappoint.

This is an epic counterpoint to the typical beer ad featuring young handsome stereotypes drinking freshly spritzed pints of glowing lager, and presents us with – and celebrates –  the true appreciators of a good beer – everyday normal people. It’s a cast of thousands, and not one, overly stylized shot of the product – trust me, it’s 2 minutes well spent.

When I talk about ‘attention’, I believe now more than ever, it’s become a commodity, sure we’ve always talked about it –  ‘we need to stand out’, ‘we need to engage with the consumer’ – it’s what makes great work, great, and there’s many a brand that has gotten our attention in different ways, they’ve slammed doors:

They’ve spoken quietly while others are shouting – Heinz Spaghetti:

But nowadays, when consumer attention is in demand, when it’s hard come-by, we need to think smarter to get it.

My final choice is an example of smart thinkers ahead of their time, from the creative team of Tom Carty, and fellow Belfast boy, Walter Campbell, is an ad that grabbed attention from the get-go: amazing visuals, surreal soundtrack and a powerfully simply idea.