Aaron Poole, marketing executive, PML Group with this week’s Out \ Look on Out of Home.

Figures released this week by Hammerson show a strong recovery in both footfall and sales in some of Ireland’s biggest retail destinations. The commercial property group own or co-own malls including Dundrum Town Centre, Pavilions in Swords, the Ilac Centre in Dublin city and has a significant stake in Kildare Village.

They report that footfall at these flagship locations is now at 90% of pre-pandemic 2019 levels with sales even surpassing the figures from 2019. Sales were up 2% on 2019 for the third quarter of 2022. 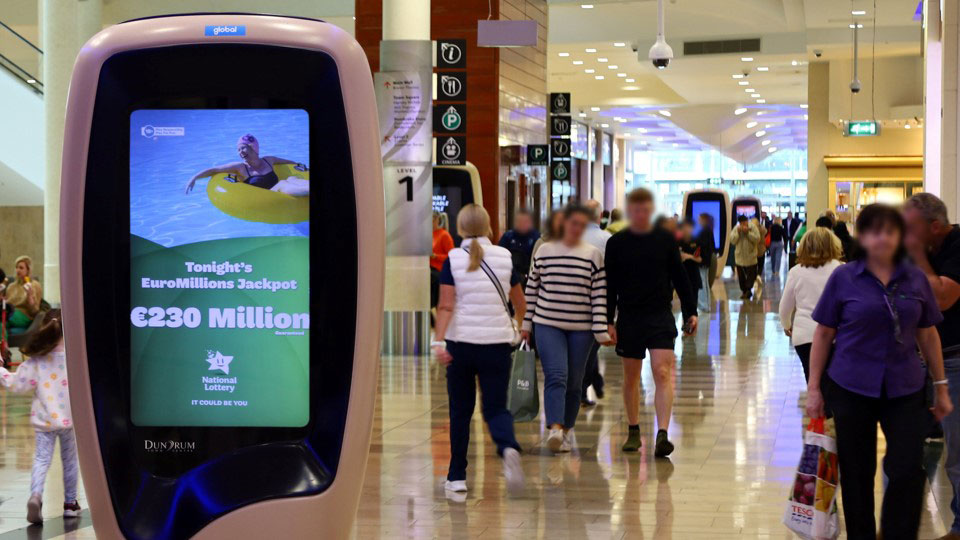 Another positive note from the release is that occupancy across all the group’s destinations is at 95%. Malls such as Dundrum and Pavilions are more than shopping locations, they are family leisure destinations reflected in the fact that more than half of the leases it has signed in 2022 have gone to non-fashion categories including food, beverage and leisure services.

According to PML Group’s latest WATCH quarterly market report, Retail based advertising accounts for 27% of all OOH display in 2022 to date, with Diageo, Mondeléz and Coca Cola the top three advertisers in the retail environment this year. Other prominent retail advertisers include Disney, Samsung, the National Lottery and Amazon Prime Video.

There is a wide scope of OOH media opportunities across mall environments, including classic mall 6 Sheets and digital dPod, iVision, Adshel Live and DX network.

Retail and Staples prominent on OOH in October
Retail remains the top spending category on OOH for October, according to PML Group’s latest WATCH figures.

The category, of which Supermarkets would be a major sub-category, is the number one category for OOH investment for the year to date also. In October, the brands to the fore in the sector included Centra, Lidl and JD Sports. Retail accounted for 15% of all OOH display in the month of October, which includes cycles 21 and 22. New entrant industry and Commerce comprises campaigns for PhoneWatch, An Post and Skillnet Ireland. 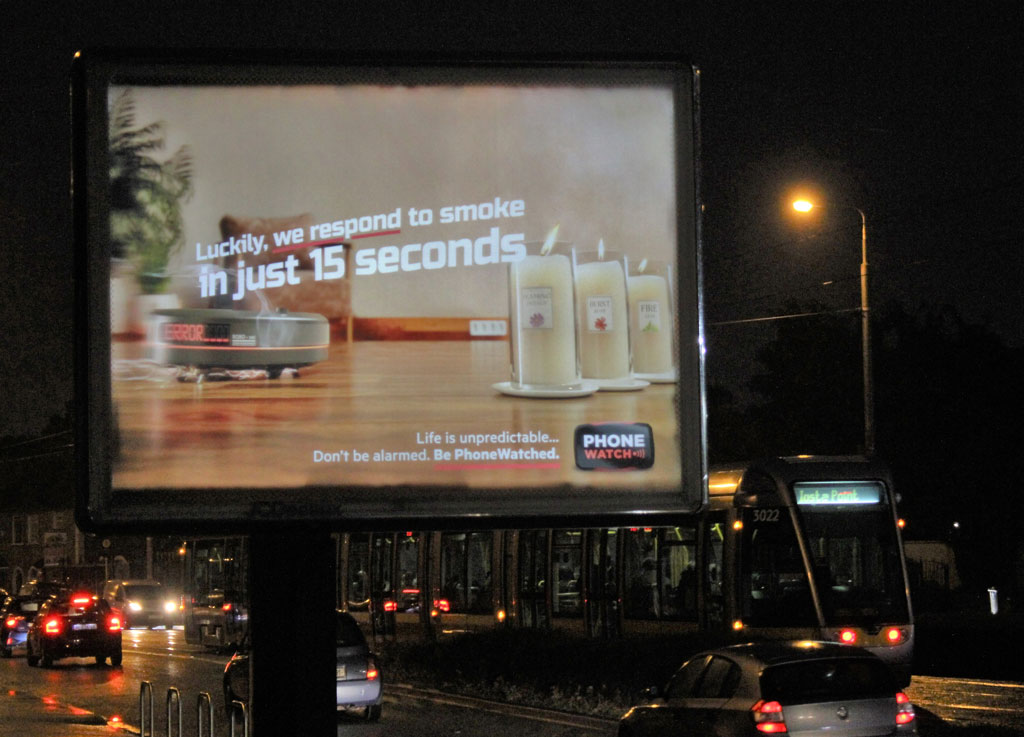 Virgin Media’s campaign for broadband gaming was the largest in the month in terms of display value.

The WATCH data behind these figures is a result of PML Group’s 100% monitoring of the OOH market every cycle.

The CSO this week published figures on new registrations of electric vehicles in Ireland and it points to a radical change in the car market. More than 1 in 5 (22%) of new vehicle registrations were for electric or hybrid vehicles in Jan-Oct 2022. In 2021, the figure was 16%.  In total during 2022, 14,707 EVs have been registered, an increase of 82% compared to the same period in 2021. 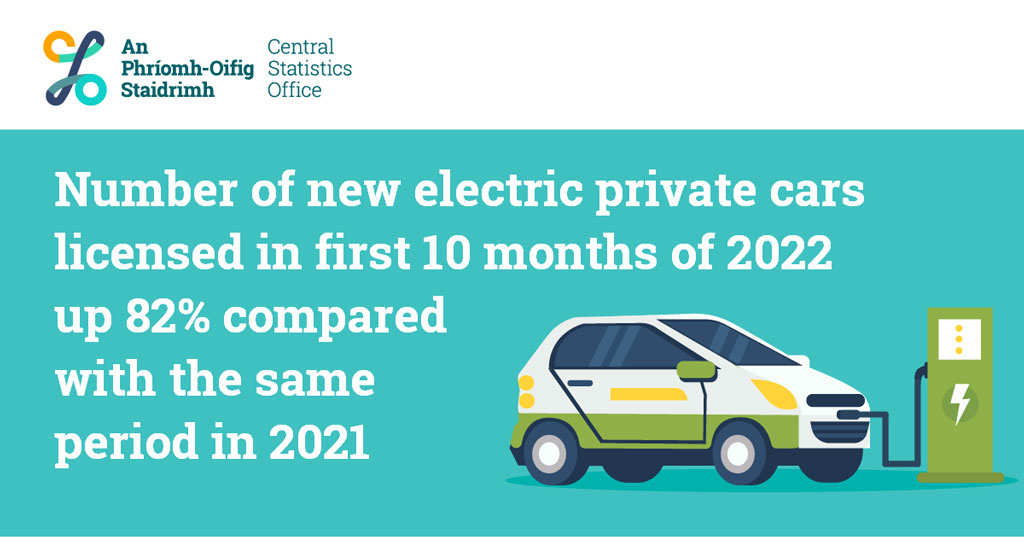 The market is a competitive one as manufacturers look to engage eco-minded consumers. Back in March, PML Group published a research piece we conducted with Ipsos on EV market trends which found that 55% of all Dubliners intend to purchase a hybrid or electric car as their next vehicle. They listed environmental benefits, fuel savings and tax savings as the three principal reasons for switching to electric. 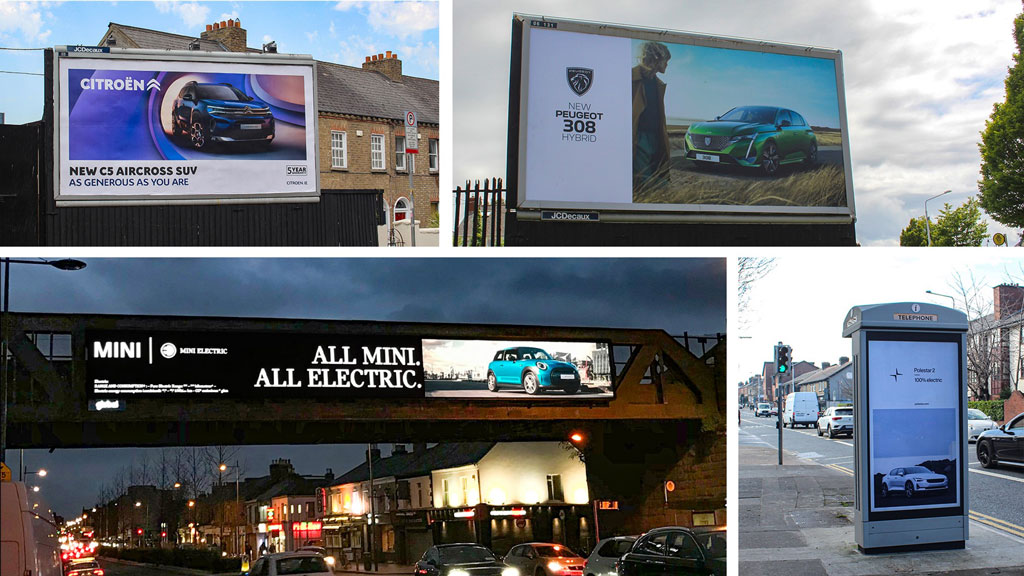 PML Group’s WATCH market intelligence service shows that the car sector had a combined display value of almost €3.5m in 2022 (Q1-Q3), with EVs making up pretty much all that investment. It’s an increase of 18% on 2021. 57% of all car activity on OOH is on classic large format panels, predominantly 48 Sheets. A breakdown of SOV by brand on OOH can be seen below. 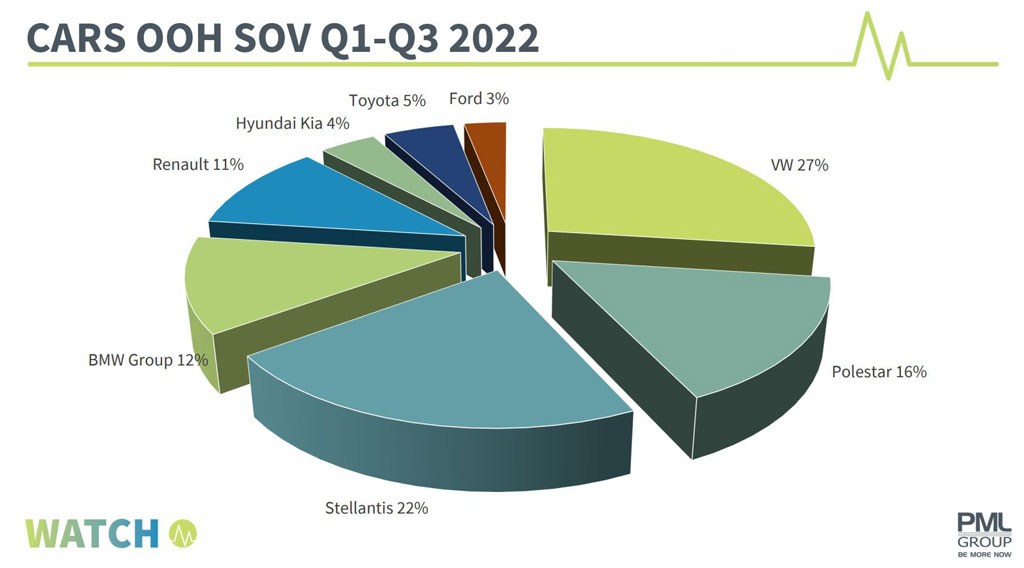 The campaign deployed Out of Home as a central pillar, running a combination of static and digital formats in Dublin and Cork. Planned by PML, the OOH elements ran across roadside, travel, transit, and retail environments on multiple formats, including 48 sheets, Digital Bridges, Digishelters, Bus Shelters, Metropoles, and bus T-Sides. 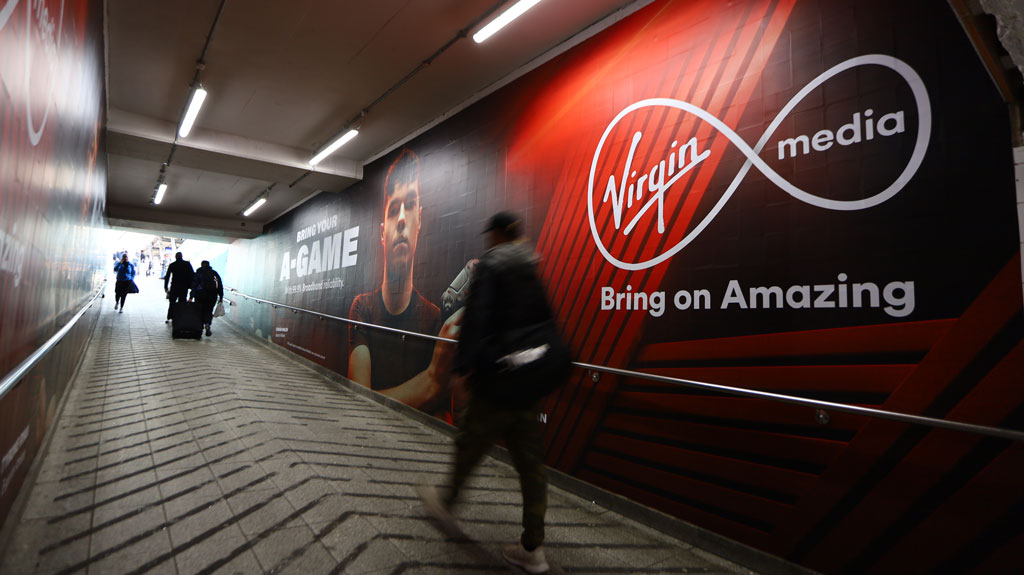 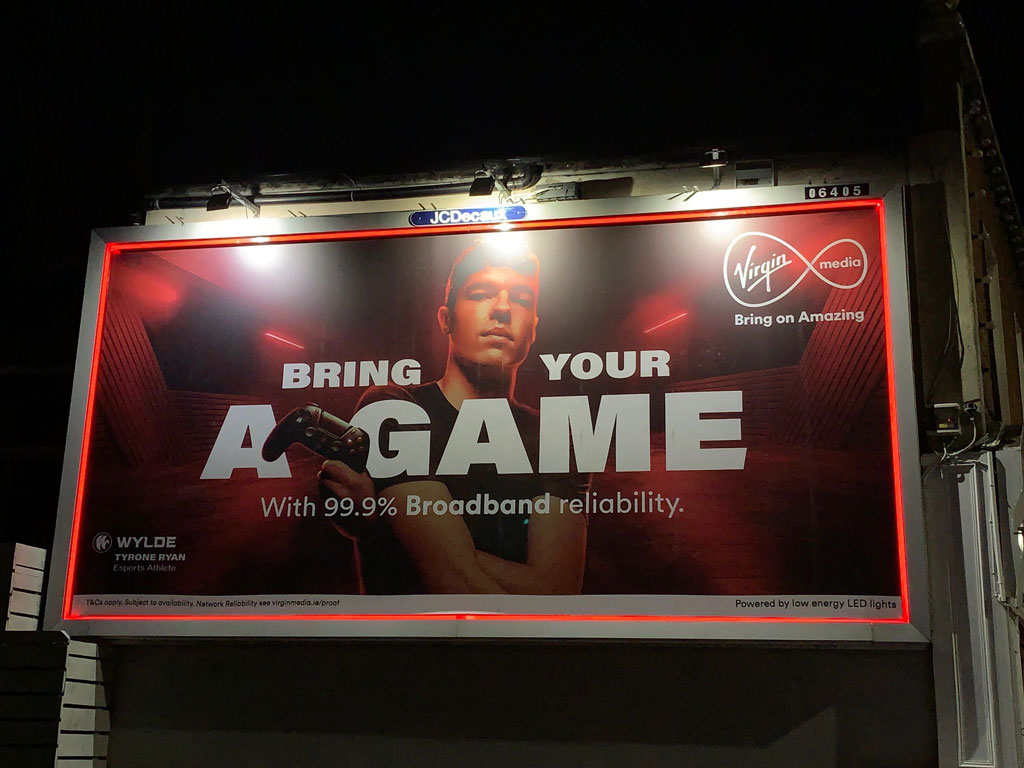 Virgin Media are the latest client to avail of special format advertising. PML Group’s Special Effects research has shown that 84% of consumers find specials to be more noticeable than standard creative, with 75% sharing the sentiment that they make brands seem more exciting. Generally, this leads to increased eWOM on social media, with 35% of consumers (and 44% of 16-24 Y/Os) sharing images of specials on social media. 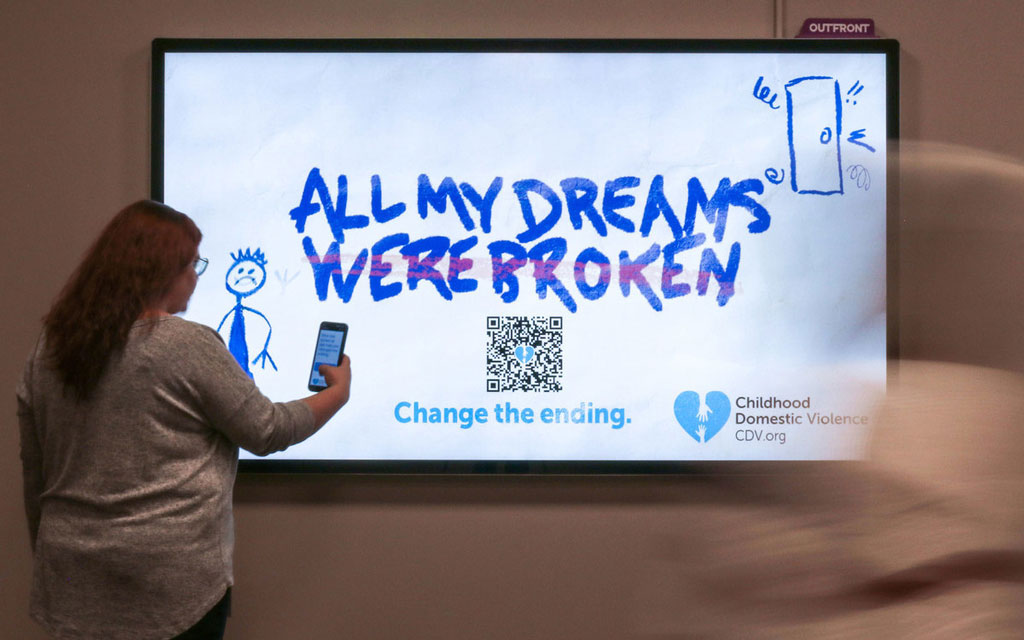 US OOH media owners Outfront have debuted a new interactive functionality in the digital panels lining the Subway stations of New York.

The technology, dubbed ‘Q-Rad’, allows consumers to not only engage with the content on-screen, but also shape it. In tandem with the Childhood Domestic Violence Association of America, the ‘Change the Ending’ campaign aims to raise awareness of the subject matter by tasing several statements that appear to have been drawn or written by a child: “I should have stopped it”, “It was my fault”, “I lived in fear”, “My Dreams have been shattered” and more.

Each image includes the slogan “Change the Ending” and a QR code which, on scanning with a smartphone, allows passers-by to dynamically change the image to a “changed ending”: “It wasn’t my job to prevent it,” “It wasn’t my fault,” “I lived happily ever after,” and “Everyone my dreams came true”.