James Byrne, marketing manager PML Group with this week’s Out \ Look on Out of Home.

OOH Advertising Set to Score during the World Cup

Major sporting events provide a unique opportunity for retailers, brands and media providers to build brand awareness, maximise association, engage with consumers and drive both conversations and conversions. From snacking to meal delivery services, off and on trade, bookmakers and broadcasters, the tactical potential of screens and posters offer an open goal. 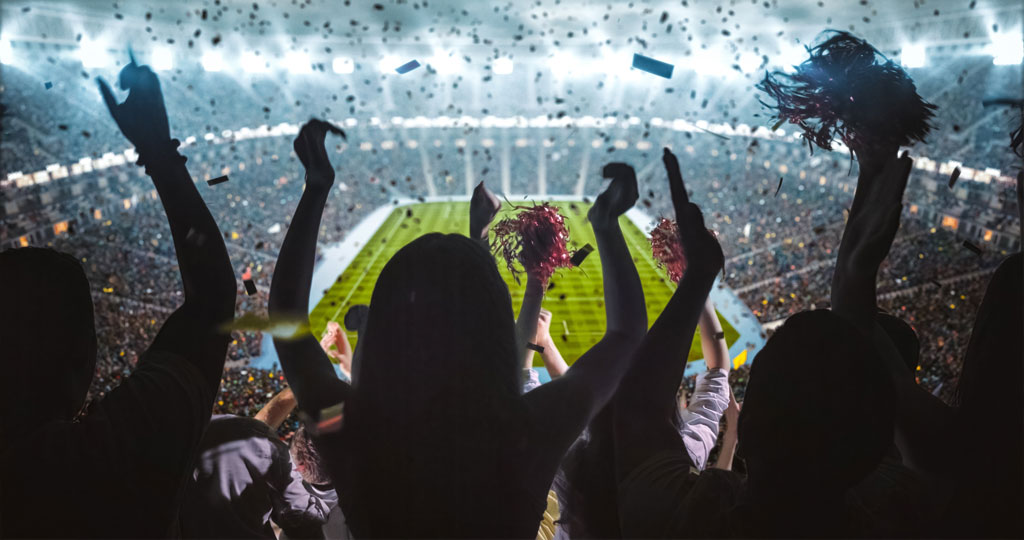 This year the FIFA World Cup will be a football fan’s paradise. For the first time in the event’s history, it is being held during the northern hemisphere’s winter months to avoid the blistering heat of summer in the Middle East. Over 28 days of play, 32 national football teams compete in 64 matches, culminating in a final game that hundreds of millions of people will watch. Taking place in Qatar, the tournament will run from 21st November until 18th December, with the pool stages lasting until 2nd December and the knockout stages beginning on 3rd December.

With matches being played across the day many fans will be out and about during gametime as they live, work and play. Our OCS study finds that 78% of people who are passionate about sport are interested in digital screen advertising relevant to a live sporting event, placing OOH centrally in terms of activations by sponsors and associated brands.

The latest wave of our iQ research programme, conducted in August, reports that 58% of adults intend to watch the World Cup. Breaking this out 79% of males and 38% of females intend to watch any of the football matches. There is consistency in intention across age groups and social classes underling the broad mass appeal of the tournament.

Of those intending to watch matches 78% intend to do so at home, 39% at a friend’s and 46% in a bar setting. Interestingly, 4% of the survey intend to watch a match live in Qatar – a possible opportunity for airport advertising. At 95% older respondents (45+) are more likely to watch matches at home (index 122) while hard to reach 18–34-year-olds tend to watch more at a friend’s (52%, index 132) or in a bar (56%, index 121) offering opportunity for OOH to target this audience on the move. Interestingly over half of females (56%) who intend to watch a game intend to do so in a bar. This compares to 42% of males albeit from a smaller base.

In its 2022 World Football Report, Nielsen found that of football fans who watch sports, 69% are likely to order food while watching, 67% may be checking their email, and 60% might play an online game. Globally, 42% of fans are interested in live betting on football while watching, and in countries like Australia, France, and the US, the number is closer to 50%. 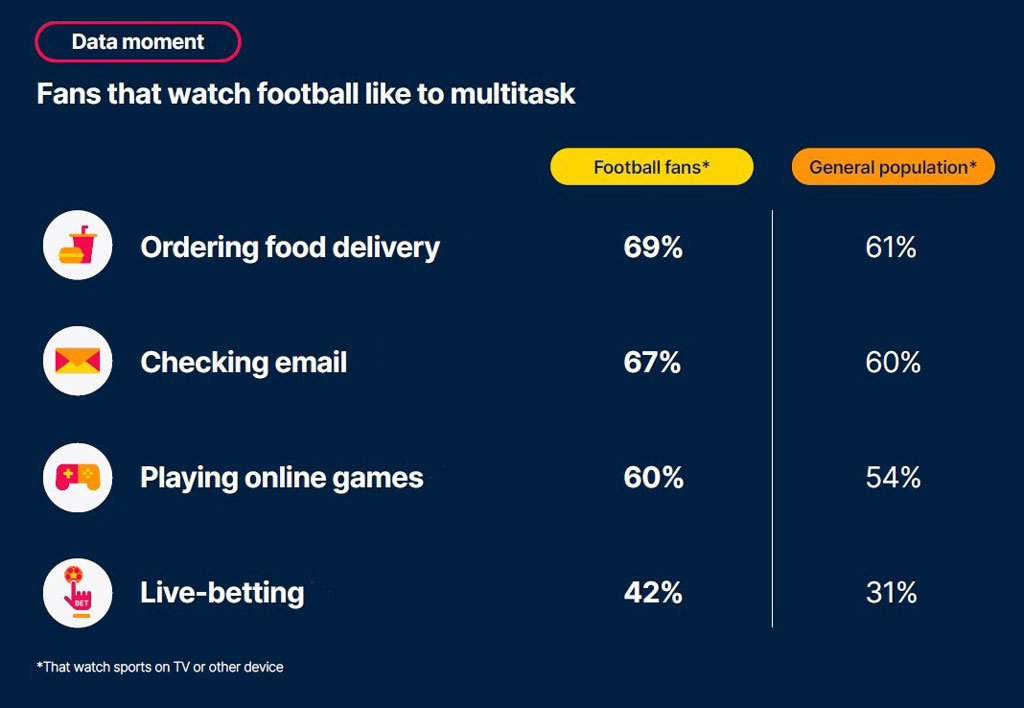 Our apparent love for all things football means that during World Cup time OOH really comes into its own. The timing of matches is perfect for capitalising on the Digital OOH opportunity, by building excitement in the morning, bringing news to those out and about during the afternoon, and celebrating (or commiserating) after each game, significantly increasing brand recall.

To demonstrate the effectiveness of dynamic copy in DOOH, Posterscope funded an independent piece of research, conducted by VirtuoCity, to test the impact against key KPIs. Against every measure, dynamic copy that was more relevant to the location, time or context delivered a stronger result versus linear content. There was an 18 percent increase in spontaneous recall, a 53% increase in message recall and 173 percent increase in relevance being cited as a reason for recall.

Despite the challenges faced, USA not qualifying, Russian time zones, and network confusion, , the FIFA World Cup campaign achieved business goals using Outdoor as a key piece of the media mix, by identifying the key moments to own.

OOH and the World Cup are a powerful combination for brands looking to tap into this once in a four-year opportunity and get in the game.

Last cycle saw several noteworthy OOH activations. RTÉ 2FM ran multiple copy showcasing its schedule and promoting its presenters. DOOH played a major role in the build up to Disney+ Day. Pret A Manger arrived in Ireland with a bang while Samsung utilised 3D motion perspective for its launch of the Galaxy Z Flip4.

Location-based marketing enables brands to connect and engage with audiences in the real world.

In its latest transport bulletin, the CSO reports that for the in the week beginning 22 August there were: 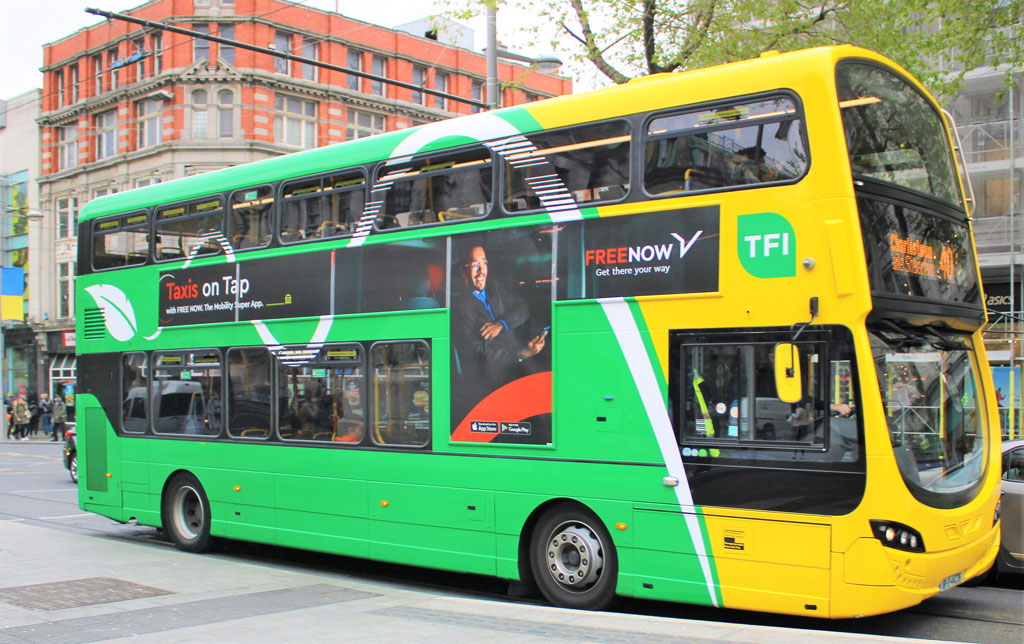 Over the same period car traffic volumes in Dublin rose by over 6% YoY to be just 3% lower than the same week in 2019.

Over 3 million passengers travelled through Dublin Airport in July, almost five times higher than in July 2021, and 89% of the level seen in the same month in 2019.