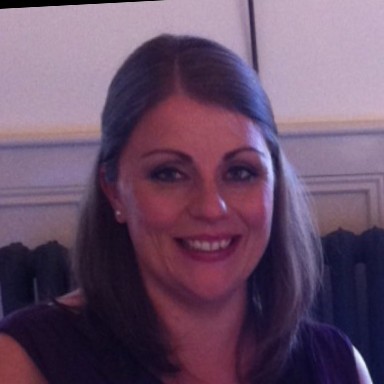 Eimear Keane dispels some of the myths about wastage when it comes to TV advertising  and audience reach.

This is the great wastage illusion. Waste is only waste if you have to pay for it. With TV advertising you only pay for the views that are within your buying audience. Anything out side that is a bonus and free!

TV is awash with data; via TAM Ireland audiences planners can “contextually target” by identifying the most efficient channels and programmes to buy for groups as diverse as Women 15-34, pet owners, farmers, children, home-owners etc .  To be honest you sometimes don’t even need to dwell on the data too much, if you want to reach sports-lovers you would obviously buy Sky Sports and GAA and Champions League coverage on Virgin Media and RTÉ, and for movie lovers Film 4, Comedy Central and the movie spots again on RTÉ and Virgin Media would seem like obvious choices.

There is a false logic that’s often bandied around the industry that only advanced online advertising offers contextual advertising therefore giving zero wastage and hyper-targeted audiences.

The general premise is that when you buy a sub-demographic such as ABC1 Women on TV, you will also reach a huge number of C2DE Women and Men. This is deemed wastage. You’re ending up with audiences seeing your ad who sit outside of your target audience.   People think that online advertising, that serves ads on a one-to-one basis and only reaches those you’re interested in speaking to is a much better, more efficient means of speaking to your target market?  It’s a compelling argument, but it’s deeply flawed.

Let’s take a look at an example. 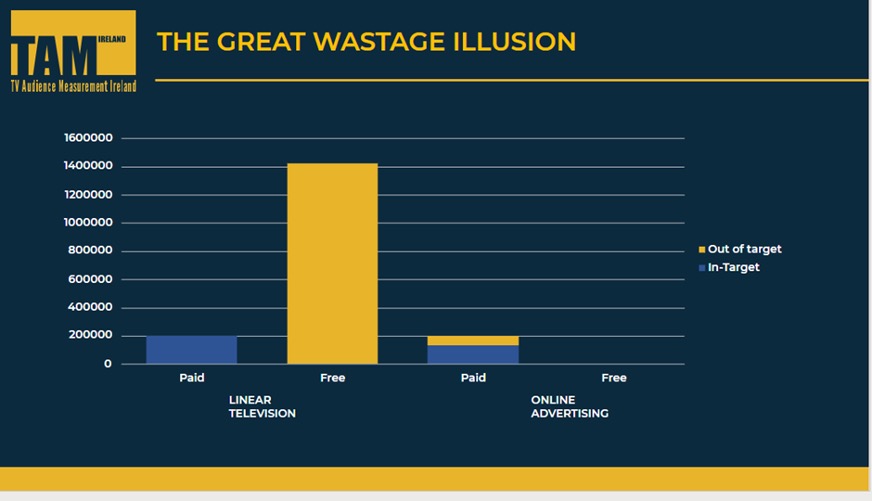 The Y axis shows the number of exposures that are delivered, and we’ve separated the exposures between linear TV on the left and online advertising on the right.  For each of these we’ve also split the exposures into two buckets – paid for exposures and free, bonus exposures.  Finally, we’ve made a distinction between the exposures into those that are in-target, so are generated by the target audience you’re actually aiming for – in this case 15-34 year olds, which are represented by a blue bar.  And those that sit outside of your intended audience, which in this case is anyone who’s not aged 15-34, here represented by the yellow bar.

But due to the nature of TV advertising you also get a rather large helping of bonus, out of target exposures. For a typical campaign targeting 15-34s, you’d also get a whopping 1,422,000 free views from out of target audiences.

Why so many more than your actual target audience?  Well two reasons, 15-34s only make up about 25% of the total population, so everything being even, for every one 15-34-year-old who sees the ad three, non 15-34s also see it.   But also linear TV viewing is weighted towards older audiences, as they spend more time watching TV, so the odds of your ad being seen by someone who’s 35 or older is greater than the odds of it being seen by someone under the age of 35.

Let’s now look at online advertising.  When you buy 200,000 16-34 exposures what do you get?   The problem here is that online targeting, per se, isn’t completely accurate.  The accuracy will massively vary by publisher and the quality of the data they hold, but the benchmark average for in-target 16-34 exposures for online according to Nielsen digital ad ratings in the UK is 65%.   What this means is that when you pay for 200,000 15-34s you get 130,000 – with the other 70,000 exposures sitting outside of your target audience.  The issue here is that you actually have to pay for these as well.

How many bonus views to you get for free you ask? None.

This is the great wastage illusion. Waste is only waste if you have to pay for it. With TV advertising you only pay for the views that are within your buying audience. Anything out side that is a bonus and free!