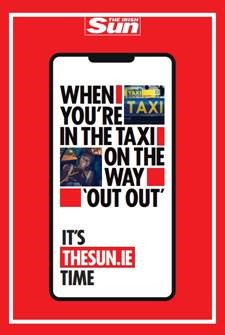 News Ireland, one of Ireland’s leading media groups, has rolled out a new multi-channel nationwide marketing campaign for The Irish Sun.

Called ‘Drive Direct to theSun.ie’, the campaign was developed by News Ireland’s dedicated agency Pulse Creative which is a joint-venture between The&Partnership, m/SIX and Wunderman Thompson.. Media buying is managed by Mindshare, with OOH looked after by Talon Ireland. The campaign will run across digital, including Facebook, Instagram and YouTube. In addition it will also run across 530 OOH sites nationwide as well as all of Wireless group’s radio stations, including Dublin’s Q102, FM104, Cork’s 96FM, C103, Live95FM, and LMFM.

The campaign focuses on the idea that life is full of moments that could do with a bit of livening up – essentially time that isn’t being made the most of. According to the publisher, “these are the moments when a little hit of entertainment would go a long way. So, whether you’re waiting on the bus, waiting for your take-away to arrive or you simply have five unexpected minutes to yourself, check out theSun.ie to turn it into a bright, bubbly burst of breaking news, sports updates or showbiz gossip”

“We’re delighted to unveil such a significant marketing campaign for The Irish Sun and to utilise it to remind readers across the country of the great news, sport and showbiz content in our newspaper. Life is full of moments which can be brightened up with breaking news, transfer rumours, or showbiz gossip and this campaign does exactly that,” says Richard Bogie, managing director, News Ireland. 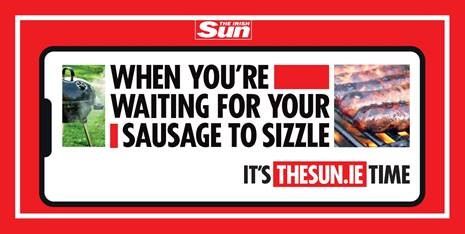