With many peoples’ social lives back on track again, James Byrne, marketing manager, PML Group looks at some of they key OOH and DOOH trends in the marketplace.

This week, we showcase some of the campaigns that had a big presence on OOH in our WATCH Review of January 2022. Figures are drawn from our Watch market intelligence service, based on our monitoring of OOH panels all over the country, and are based on display value at rate card.

Carlsberg 0.0, Rockshore Light and Gordon’s 0.0 were amongst the biggest campaigns on Outdoor in January, helping make Diageo the top advertiser for the month. The campaigns launched as part of the ‘Dry January’ initiative to spark interest in the ‘NoLo’ drinks category. The campaigns are hugely relevant as brands are faced with the growing trends of health and well-being with consumers looking to cut back on alcohol consumption. Our ‘Zero in Focus’ study, found that one third of all adult drinkers said they consume more zero alcohol beers than they did a year ago. Beers and ciders are the second most active category for the month with share of voice at 11%. 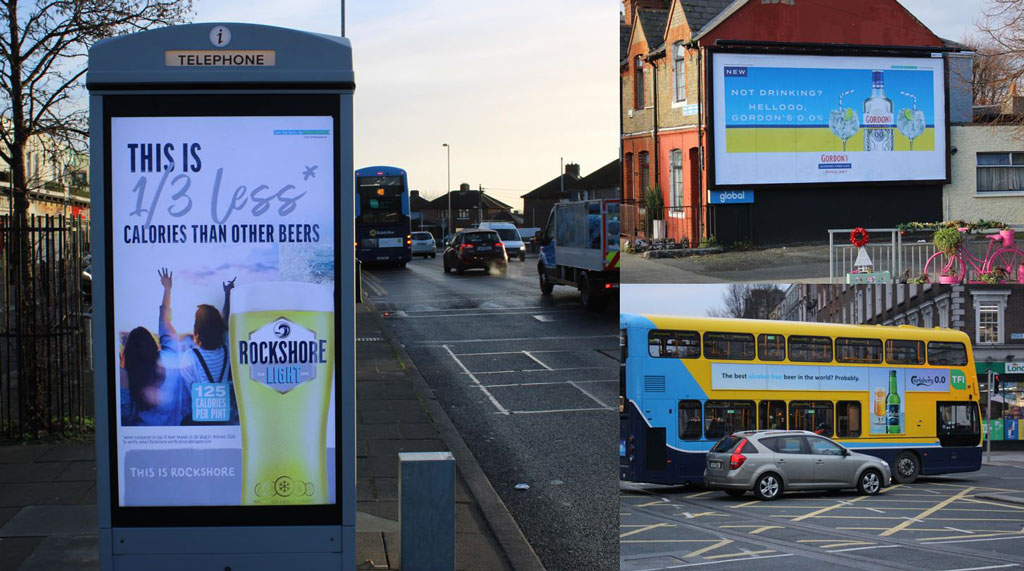 Dunnes Stores and Tesco featured among the top campaigns for January, driving retail to the top spot among categories with a SOV at almost 16%. Dunnes Stores ran campaigns across retail and roadside environments using high impact formats to showcase its product offerings and promote its App with a strong call to action message. 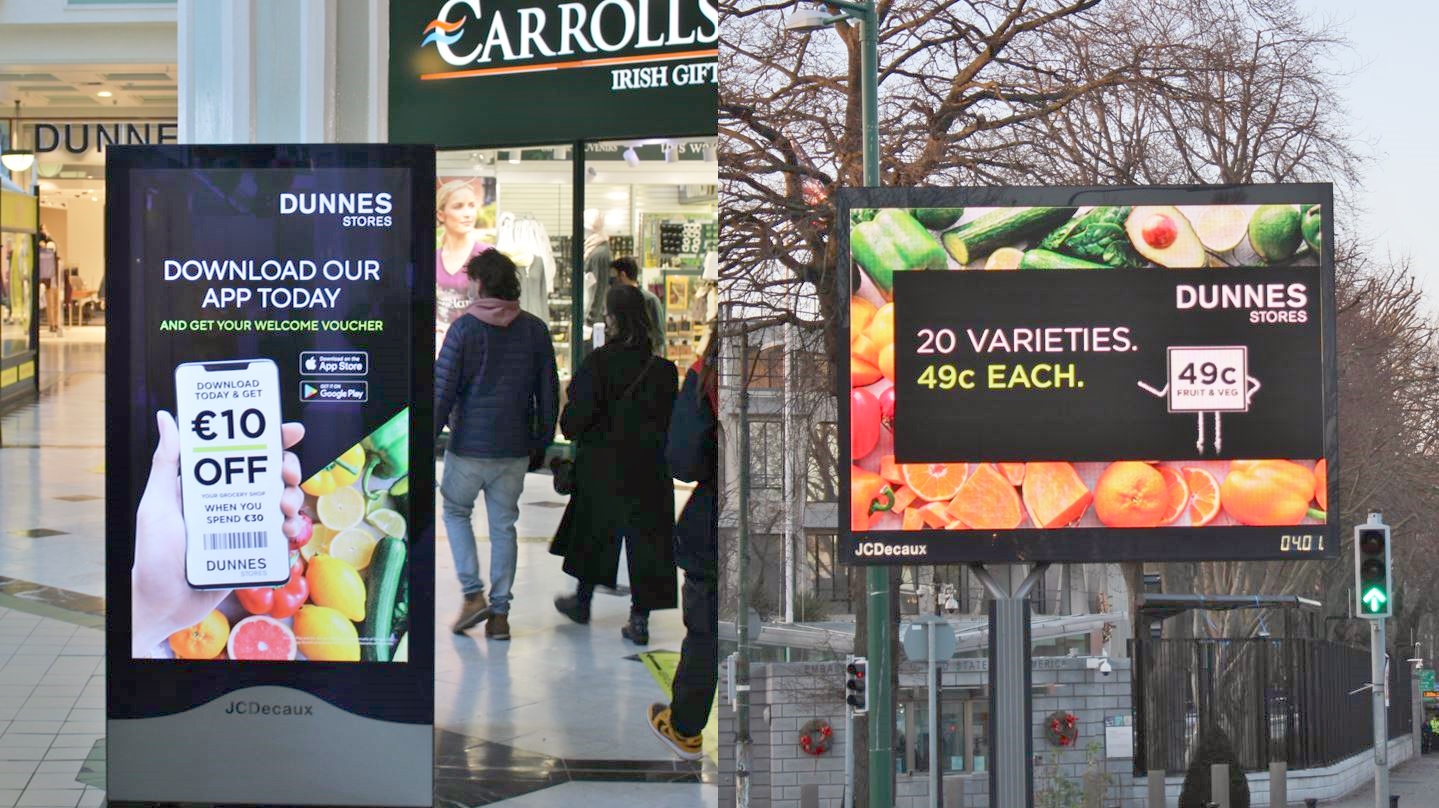 Over the last few months, we have seen the Film category make a major return to the OOH canvas for releases including Spider-Man No Way Home, Venom and No Time to Die. 2022 is already looking strong for Film as it has landed in the Top 10 OOH Category for January. 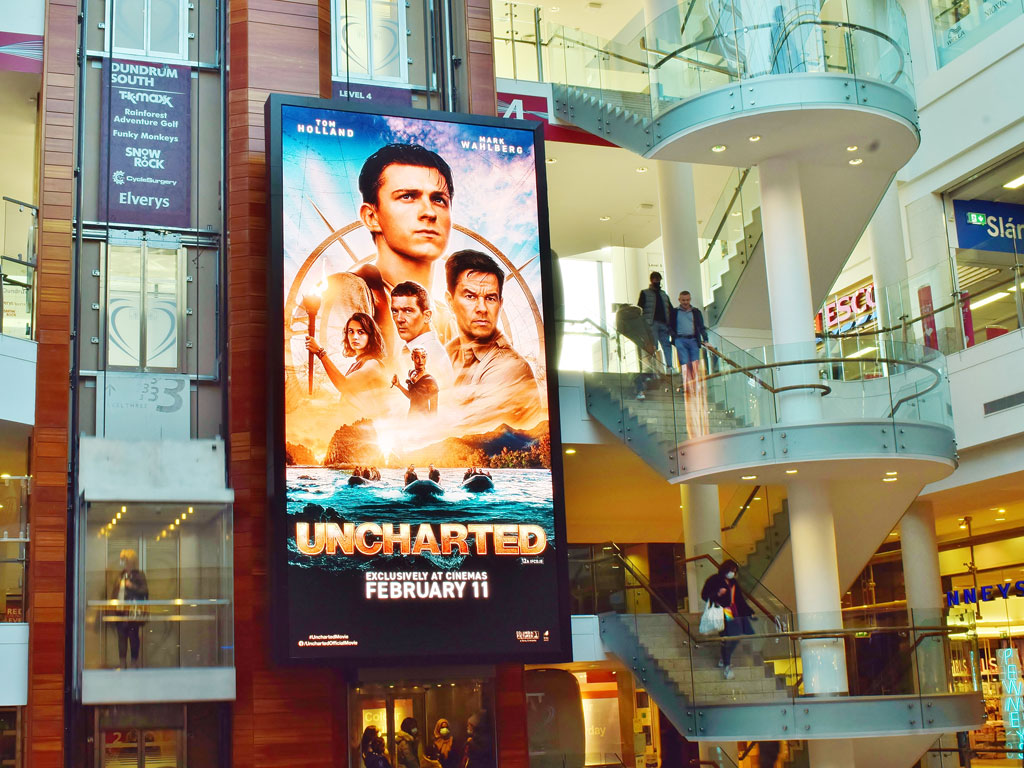 This month, Sony Pictures new Film Uncharted is taking full of advantage of Out of Home’s key strengths. In the build up to the release, the campaign is running across formats such as DX Screen in Dundrum shopping centre, Adshel Live and Digipoles. The Film took to the Aviva Screens during Ireland’s opening game for The Guinness Six Nations. By targeting events, the film reached a large audience of 52,000 spectators and highlights how the broad reach of OOH is unparalleled. Uncharted is out now exclusively in cinemas nationwide. 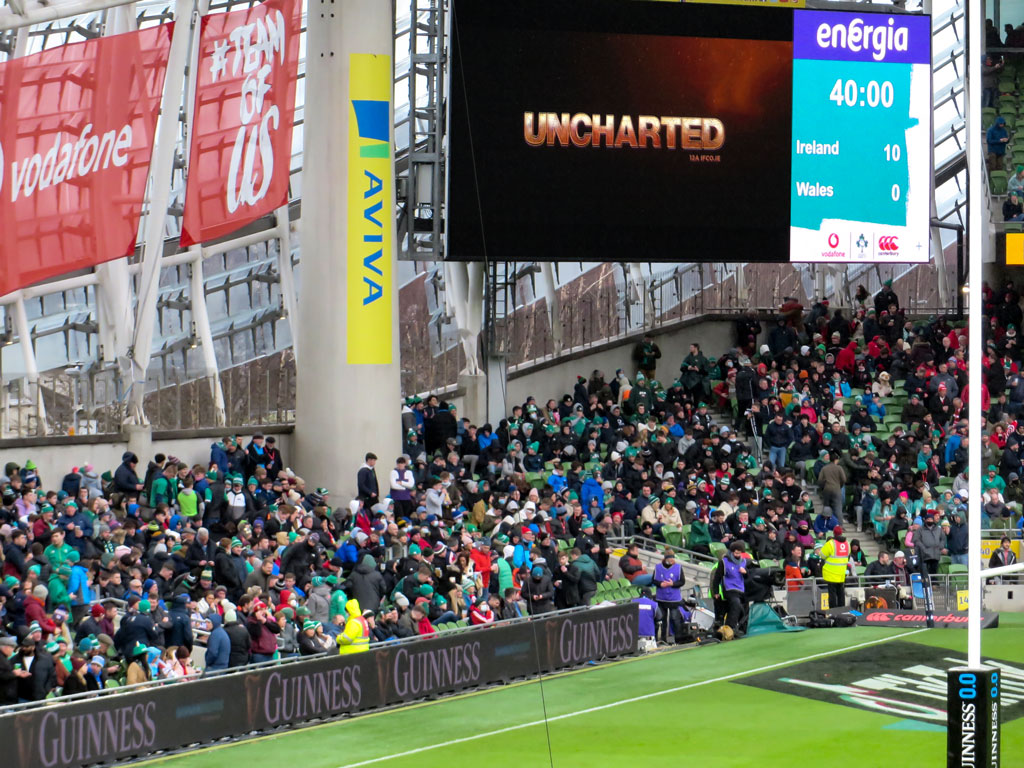 Irish Life Health hit the ground running and has landed in top campaigns, bringing Finance into the Top 10 advertising categories with SOV at almost 5% for January 2022. The campaign promotes its BeneFit plan on OOH with the offer of €250 back on a healthy lifestyle. Roadside screens featured location shout-outs in the form of sporting clubs in the area formed part of the initial roll-out of a Dynamic Digital OOH campaign enabled by our Liveposter platform. 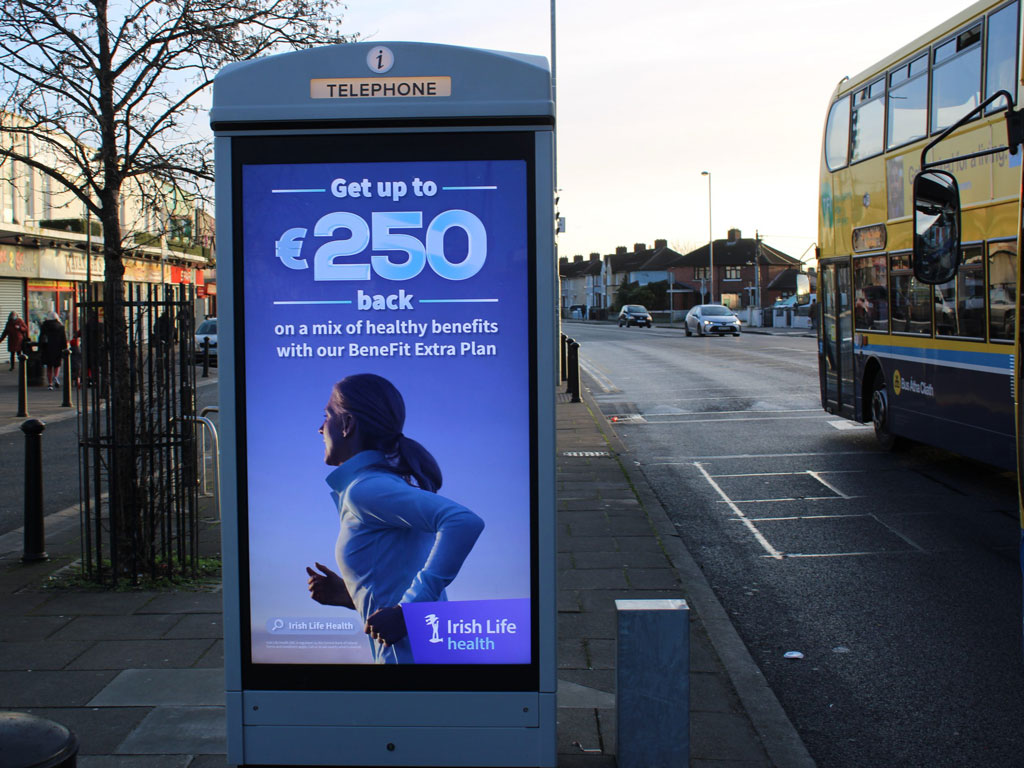 In its new TouchPoints report Making Sense reports the IPA (Institute of Practitioners in Advertising UK) this week reported that “Increasingly media planners are facing challenges when building broad-audience, high-reach campaigns, and with the exception of OOH, no single curated channel can reach 90%+ of All Adults per week…OOH is once again leading in terms of overall reach and time spent.” 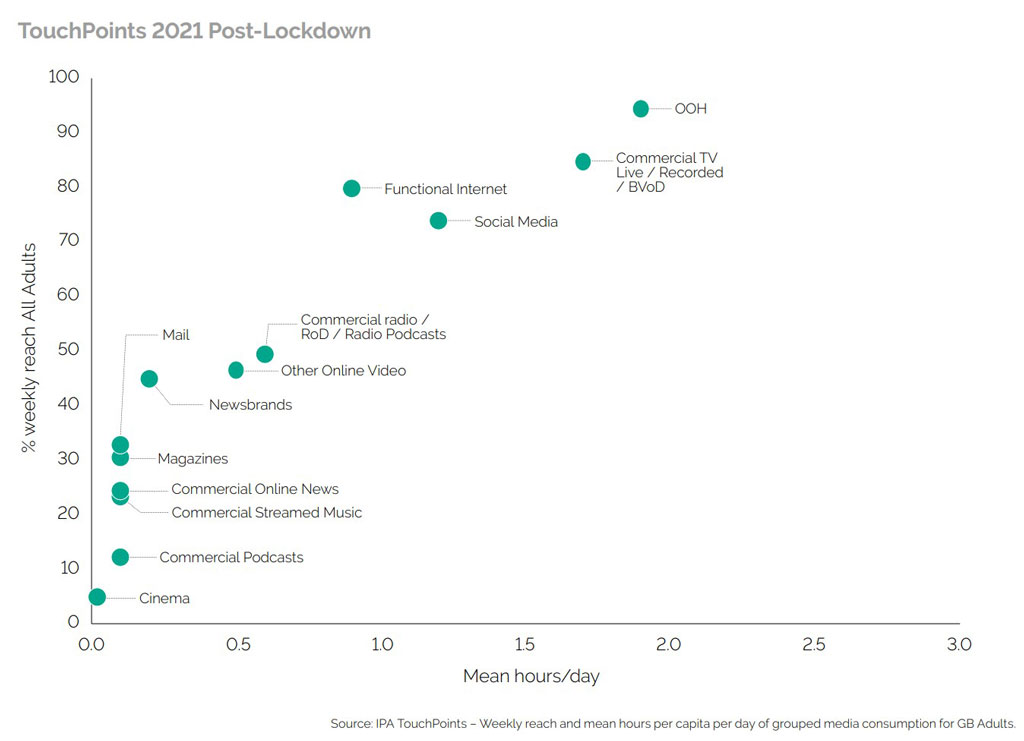 Wave 26 of the ESRI’s Social Activity Measure – which is based on data collected during the week to January 25th, reported a large increase in social activity, especially following the 21st January announcement. People visited more locations outside the home, during both the previous week and the previous day. Visits over the week increased for all locations. Significant increases were seen in visits to shops/ businesses, work, café/pubs/restaurants, exercise, event, and hotels/B&Bs. There was also a sharp recovery in intercounty travel. 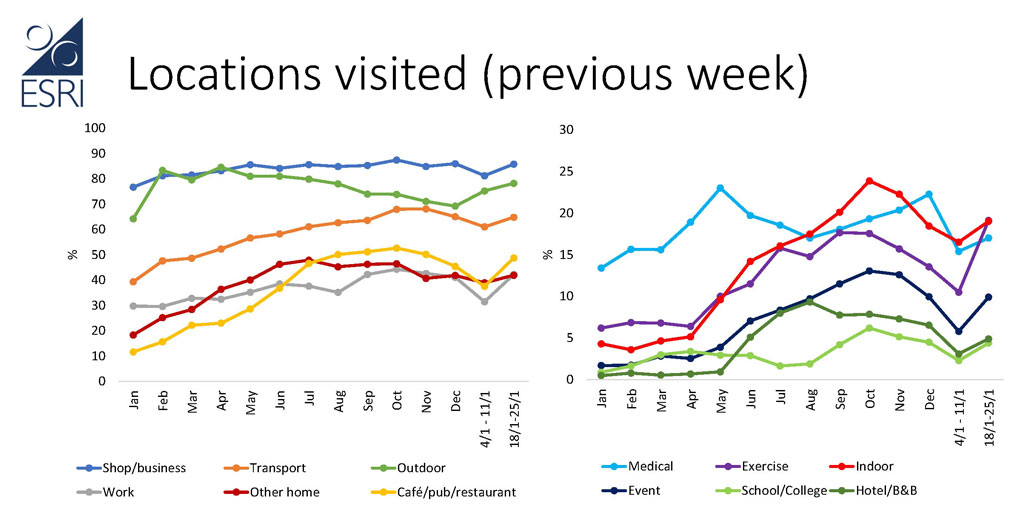 The Social Activity Measure (SAM), a behavioural is a collaboration between the Department of the Taoiseach and the ESRI’s Behavioural Research Unit (BRU). The study collects data from 1,000 respondents every two weeks.

58% of us plan to spend on leisure travel in the next four weeks. Over half of us also plan to stay in a hotel in the next three months while 37% intend to fly internationally, peaking at 49% of 18-34s