The RTÉ Weather, the Late Late Show, Fair City, Emmerdale, Coronation Street, Ireland’s Fittest Family and a range of live sporting events were among the top sponsored programmes on TV in 2021 according to a new analysis of the TV sponsorship carried out by Core Sponsorship.

The analysis looks at TV programming on RTÉ’s channels as well as those of Virgin Media Television (VMTV) examining them by both ratings and reach. “Every year the Top Programmes on Irish television for the previous year are released and on the 13th January 2022, we saw the release of the 2021 figures. We wanted to investigate whether the top programmes are also the top options for sponsors,” says Sarah Geoghegan, head of media sponsorship and one of the co-authors of the report. 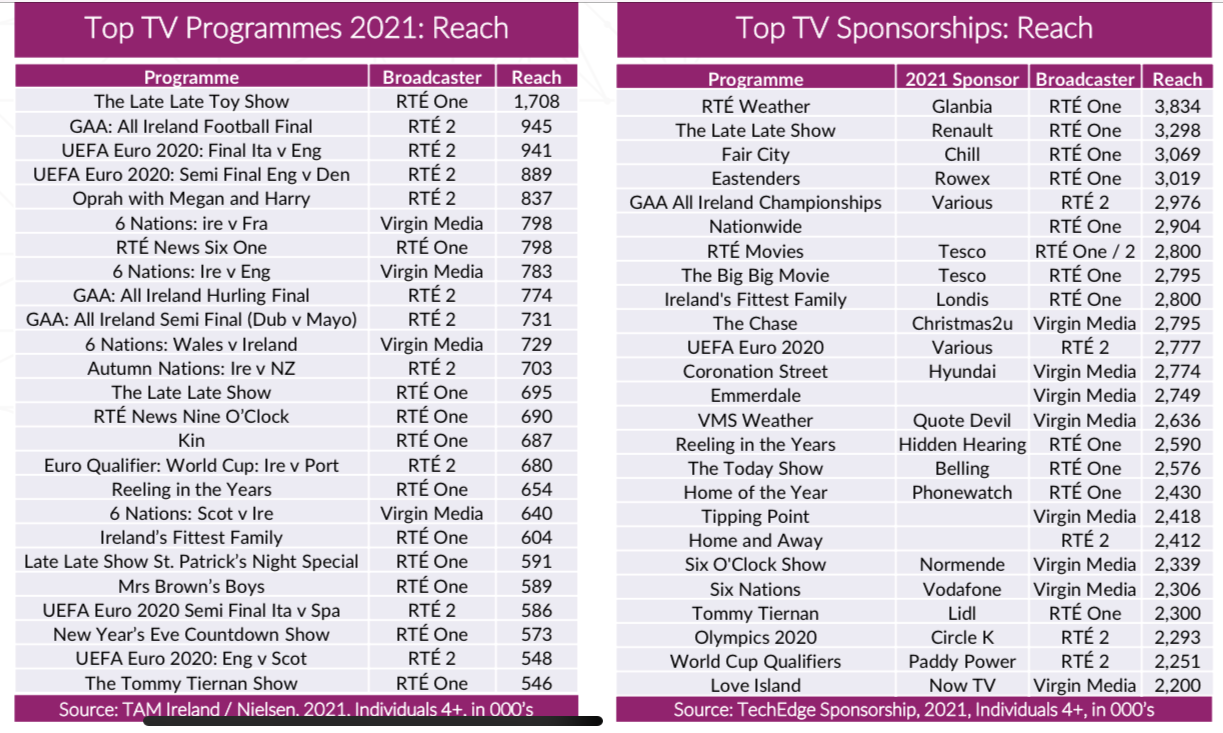 ”As expected, The Late Late Toy Show continues to be a phenomenon. Good news for the sponsor, Renault who were right there alongside the programme. In addition, both the main show and the St. Patrick’s Day’s Late Late special featured in the top 20. The sponsor is the nearest commercial message the viewer sees before each part of the show, at the start, at the end and at the top and tail of each commercial break, typically the point of highest attention in the break,” she says.

“Brands pay significant sums to access the Toy Show breaks, paying up to €40,000 per 30 sec spot but, as the sponsor, Renault was there throughout the broadcast. They had 10 stings in the live show, in every repeat, and a 10 second pre-roll sting on the RTÉ Player content,” she adds.

“However, in terms of audience reach and ratings delivered for the sponsor, there is one broadcast sponsorship even bigger than the Late Late Show and that is RTÉ’s Weather,” says Geoghegan. “In a sponsorship context, nothing comes close,” she says.  “This year marks the beginning of a new sponsor for Weather, with Glanbia finally giving up the most coveted asset in the TV market after fifteen years. Fáilte Ireland is the new partner of this behemoth sponsorship, negotiated by Mindshare. It will allow the brand to invite viewers daily, using a series of stings created by Core, to keep discovering this beautiful country. Ireland can feed the senses like nowhere else and the creative showcases how wonderful that discovery can feel. We are excited to watch this and other fascinating partnerships unfold across the year, as sponsorships continue to deliver for brands,” Geoghan adds. 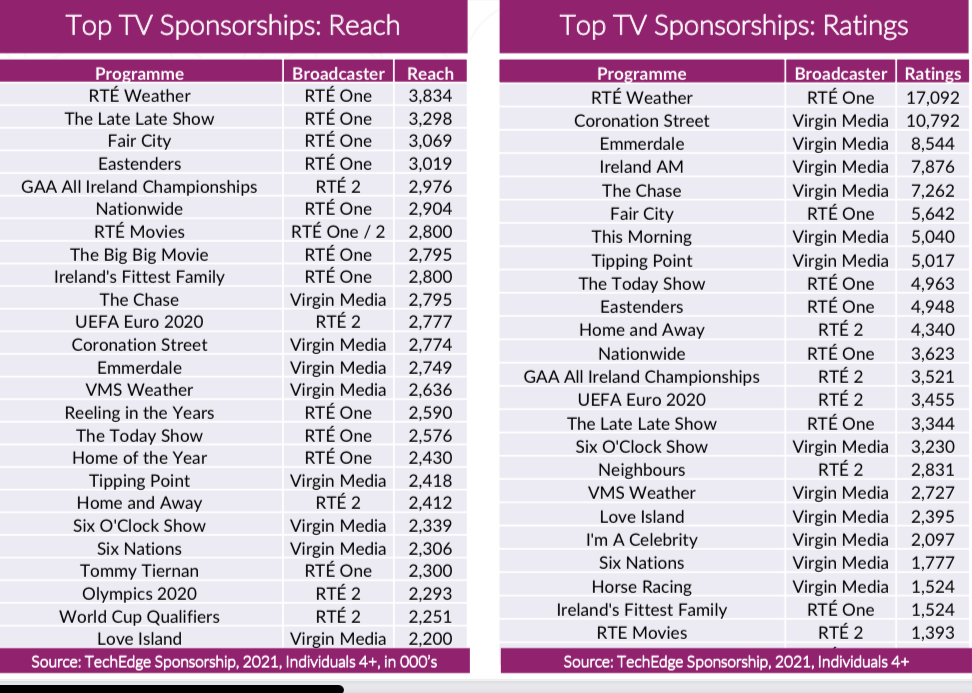 “While sport dominates the top 25 programmes, those offering sponsors the best reach and value for money include programmes with a consistent presence across the year. We see more of a mix of soaps, movies, light entertainment and feature series such as Love Island, Ireland’s Fittest Family and Home of the Year. This is alongside key sporting favourites like the GAA All Ireland Championships, The Olympics, Euro2020, World Cup Qualifiers and the Six Nations,” she says.

According to Jane Murray, media sponsorship manager with Core Sponsorship: “We see year in and year out that the top TV programmes are dominated by those broadcast on RTÉ, and this year is no different. In 2021, Virgin Media appears only four times in the top 25 programmes, for its Six Nations coverage. In contrast, when considering the top TV sponsorships there is a much more even split between RTÉ and Virgin Media. What the latter brings to viewers and sponsors are those always-on, high reaching, high frequency properties. These shows give the brand a consistent presence across the year and protect them from seasonal price inflation.”

“In running this analysis, we have only looked at programmes which can be sponsored. If content like the RTÉ News at Six or Nine could be sponsored, they would be number two and three respectively,” says Murray. “ Alas, brands cannot sponsor current affairs programming and therefore News, Primetime and the Tonight Show are all off the table,” she adds.

The important role that sports plays in broadcasters’ schedules is also highlighted in the report but it can be a tricky market for sponsors to navigate. “Sport delivers for TV sponsors also but access to the content is a little more complicated, especially for the larger broadcast deals such as the GAA All Ireland Championships, UEFA Euro 2020 and the 0lympics, where tournament partners get preferential access. While there was much discussion about the Olympics not featuring in the top programmes on an individual programme basis, the sponsorship of the games on TV, was featured in the top 25 sponsorships. This is despite the unfavourable time difference in the coverage,” says Murray.

“The big winner this year was Ireland’s Fittest Family. A short run programme over eight weeks, with an additional Celebrity Special, it does incredibly well to rank nineth overall in terms of reach for sponsor Londis. While feature programmes such as this and the likes of Love Island (Now TV) and Home of the Year (Phonewatch) are on air for shorter time spans, they are highly prized for the social buzz they create and the spike in interest levels shown over a concentrated period of time. They are major brands in their own right. While Sky and TG4 don’t feature in the top 25 sponsorships there are lots of exciting opportunities on these channels to consider, which deliver for brands. This is especially relevant given the recent announcement by Sky of offering addressable sponsorship. Watch this space,” she adds.