New Research on the Return to Workplace

This week in PML Group we began the phased return of the team to our base in Dublin 2. It’s a red-letter week for us and thousands of office-based businesses across the country and a real cause for relief and celebration.

There is no doubt that the phased return of workers to offices, which began in earnest on September 20th, is having a positive impact on footfall and audience in city centres, and on public transport and traffic. Transport Infrastructure Ireland reported vehicle journeys up by 600,000 in the week of September 20th, a 9.6% increase on the week before. The first three days of the same week also saw a 6% rise in Dublin city centre pedestrian footfall, according to Visit Dublin. For the first time since Christmas, footfall in the city reached 70% of 2019 levels that week.  September 22nd also saw Dublin Bus carry more than 300,000 customers, the highest of any day since the pandemic struck. All those indicators can only have improved further since. 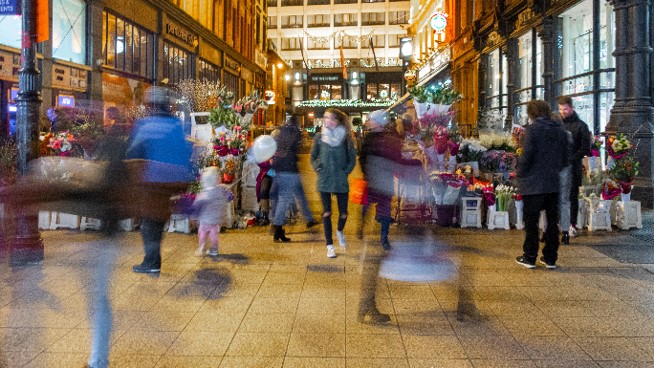 Like PML Group, many businesses are introducing a hybrid working model, with team members working part of the week in the office environment and part of the week in a remote location. Our latest IQ research has investigated how Dubliners anticipate the effect on their working lives. Results indicate that 52% of respondents will be workplace-based for three days or more from now on, rising to 71% among 18-24s. 56% of those aged 25-34 will be working in the office the majority of the week. Although no major difference was recorded between males and females, quite a large difference was evident among social classes, as seen in the chart below. Perhaps a reflection of the nature of work involved among the various social class groupings. 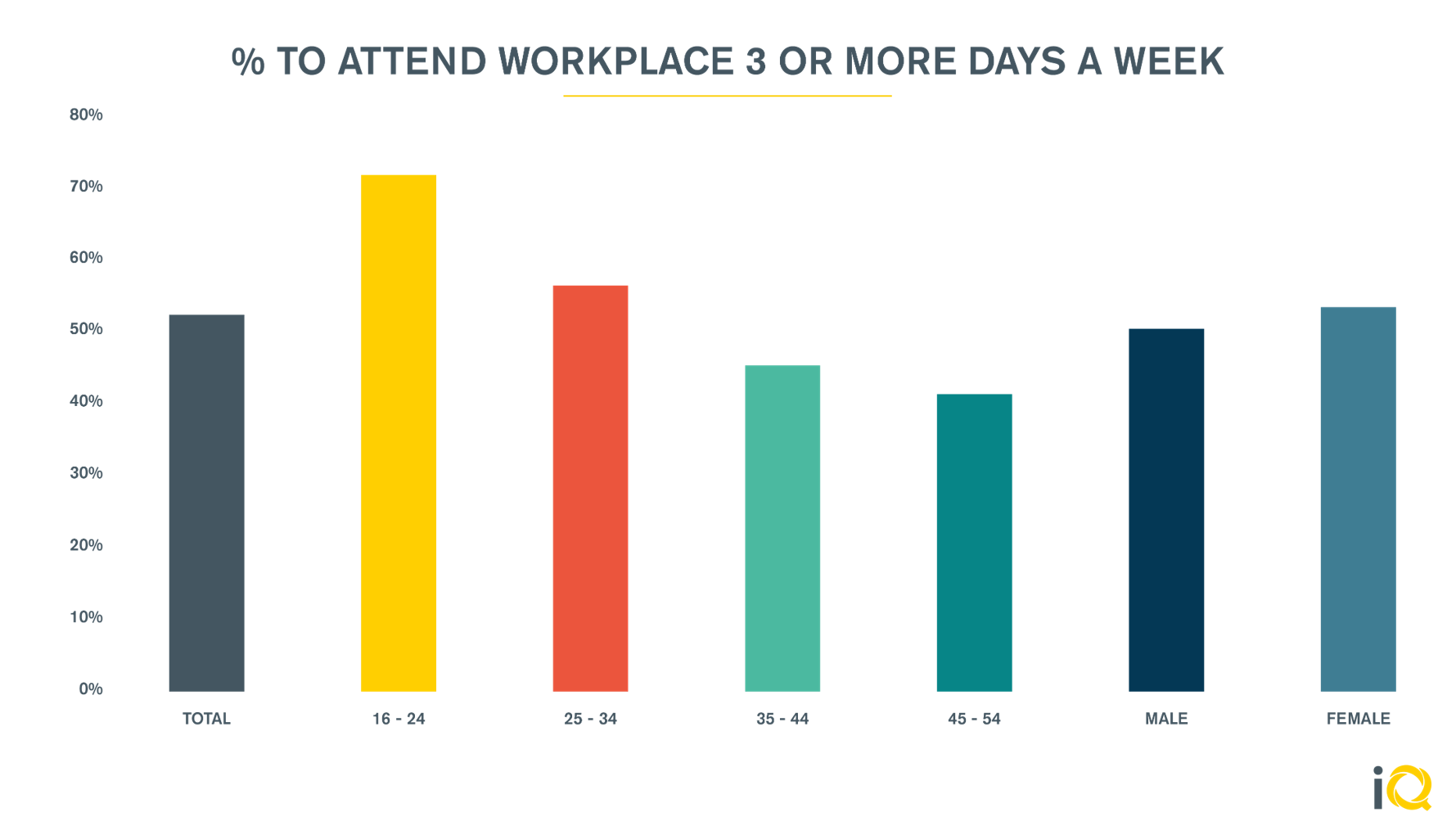 In the main, respondents will be using the same modes of transport they did before March 2020, with percentages for car use, DART and LUAS all virtually unchanged. Cycling and walking have increased marginally. One in five say they will be using the bus, rising to 29% of 35-44s.

Of those surveyed, 38% have worked remotely throughout the pandemic, 40% exclusively in the workplace and 22% have had some sort of mix up to now. 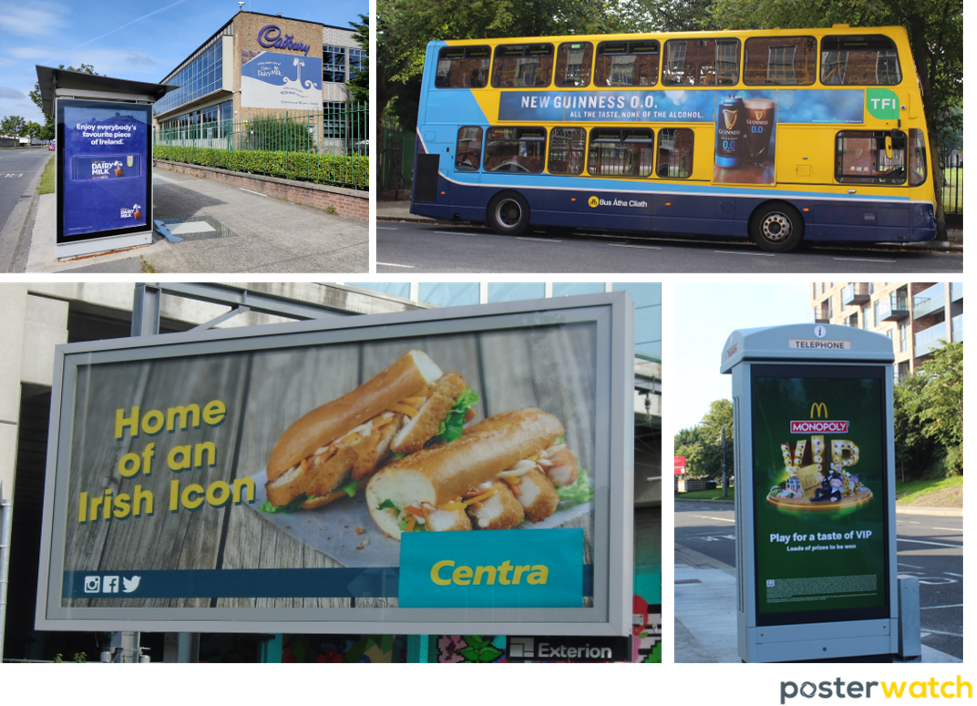 The launch of the much anticipated zero alcohol Guinness was among the biggest campaigns on Outdoor in September, helping make Diageo the number one advertiser on the medium in terms of display value for the month. Other campaigns from the drinks company included a James Bond themed large format campaign for Smirnoff vodka. Musgrave supported both their SuperValu and Centra brands on OOH in September and Retail was the top spending category for the month. Mondeléz was in second spot on the advertiser list for the month with active brands including belVita, Cadbury Dairy Milk and a limited edition Wispa Gold variant. The return of the popular Monopoly promotion in McDonald’s was the basis for a large-scale Outdoor campaign, including many digital formats such as digital bridges, digital kiosks and digital bus shelters.

PML Group will be publishing a full year to date Posterwatch market report in the coming weeks.

One of the advertising categories hit hardest on OOH over the past year and a half was Film, and more specifically films for cinema release. What had been a mainstay of OOH advertising for decades had been missing for large parts of the past 18 months, as restrictions on cinema attendance played out. However, just as the crowds have returned to see James Bond’s 25th outing in No Time To Die so too have films made a major return to the OOH canvas. 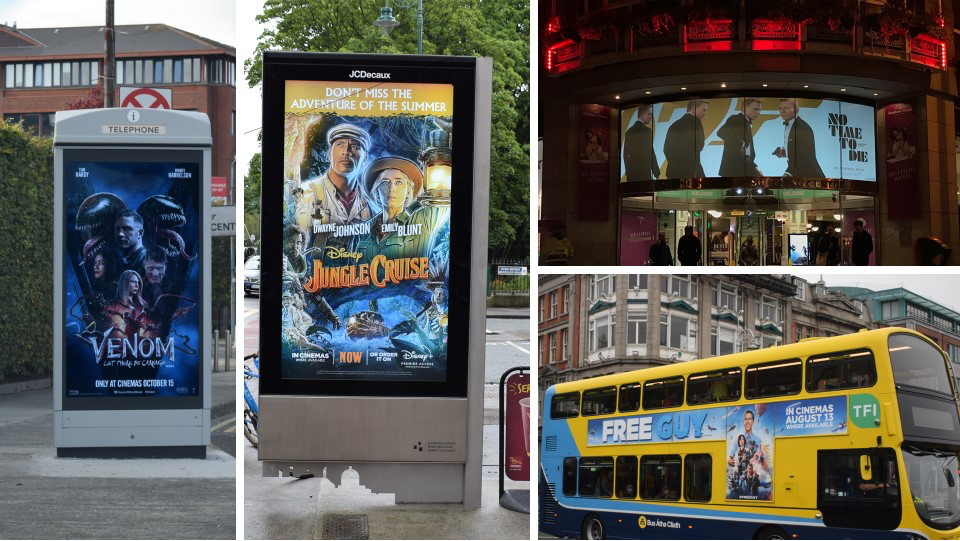 In addition to an extensive campaign for No Time To Die, we’ve also recently seen Outdoor in action for releases including Venom, Disney’s Jungle Cruise and Free Guy. Transport formats such as T-Sides and proximity panels near cinemas (such as retail digital) are traditionally favoured options for the category and these remain popular, complemented by new opportunities like Adshel Live digital kiosks and digital bridges. Product tie-ins with films is another avenue now back on the agenda and Smirnoff’s association with Bond was brough to life on Outdoor also.

Not only is the resurgence of the category on OOH a response to changing restrictions on cinema but also an acknowledgement by these advertisers that audience behaviour is changing again in the OOH sense and their format choices reflect the fact. Those evening and night audiences at cinema locations such as malls also add value to advertising for brands there, by extending their daily window of influence.