Business Live, the business website owned by Reach has launched a new campaign at Belfast City Airport to promote its launch in Northern Ireland.

Business Live is Reach’s UK-wide business news website that publishes stories written by business writers from across the group’s national and regional titles in the UK and it now hosts a Northern Ireland section that is put together by business journalist David Elliott, who is also Senior Client Director at Lanyon Group.

This is the second brand campaign currently in place at the airport by news publisher Reach, which also owns Belfast Live, with the renewal of its outdoor bus shelter site occupying a Belfast Live design.

According to Belfast City Airport, over 44% of passengers travel through the airport each year for business. “As travel confidence starts to return, the aim is that business passengers will be exposed to the new brand campaign, creating brand awareness through the key launch message that ‘Business Live has landed in NI’”, says Jonathan Eakin, commercial director at Reach in Ireland (pictured).

The campaign, which will be in place until November, comprises a digital wall, which is an unmissable format within departures where footfall and dwell time are high. The creative includes the tagline ‘A new destination for business news in NI’ tying into the travel theme.

The second format incorporated within the campaign is the sponsored WiFi card. As commuters wait to board, they can access the airport’s free and unlimited WiFi which serves up a branded WiFi connectivity screen and once connected, users will be taken onto the Northern Ireland section of Business Live to catch-up on all of the latest business news with the option to subscribe to get Business Live NI news sent to them weekly.

“We are delighted to launch Business Live in Northern Ireland and even more delighted to see the brand on show here at the City Airport. Northern Ireland companies have shown so much resilience over the past year and through Business Live we’re able to support them as they look to grow again, with business news and advertising solutions done with a local focus on a nationally recognised platform,” adds Eakin. 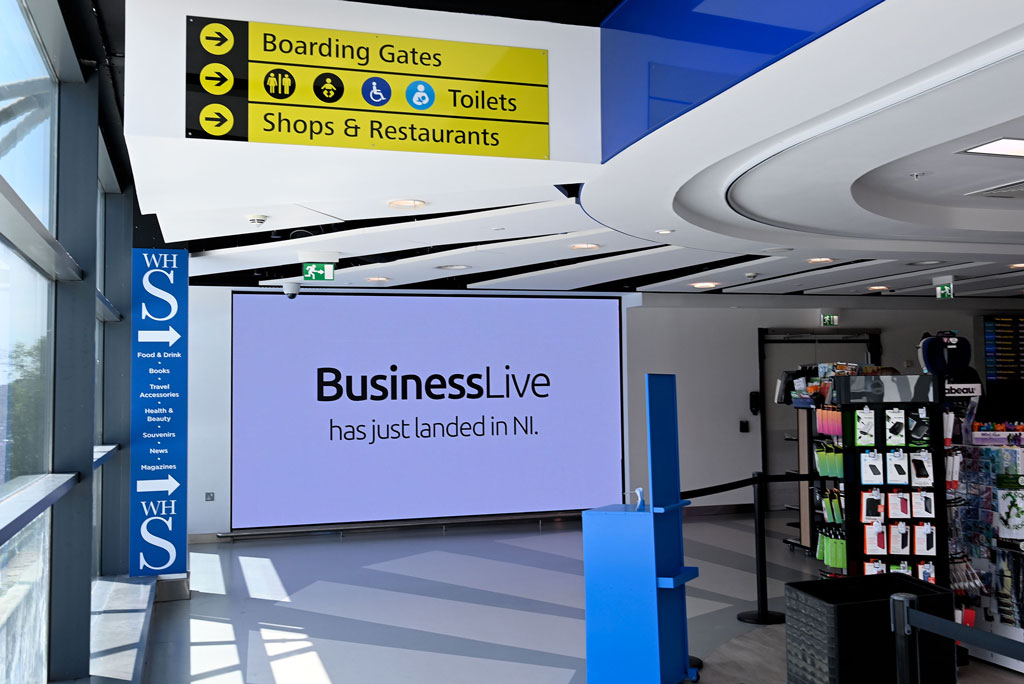 Sonia Armstrong, media sales manager at Belfast City Airport adds: “We are delighted to be working with Reach again and for Belfast City Airport to be chosen as the leading venue to launch Business Live. Belfast City Airport is the UK and Ireland’s most convenient airport, primely located close to the city centre and the Northern Ireland offices of some of the world’s biggest organisations. Combine this with our robust route network served by regional and blue chip airlines including Aer Lingus, British Airways, and KLM, which provides frequent and convenient connectivity to the UK and Europe, and the fact that over 44% of our passengers annually are business travellers, it’s clear to see why we’re the ideal location for building brand awareness amongst a business target audience.”

The campaign was booked directly with the Belfast City Airport advertising department.  The photography was taken by Justin Kernoghan, Reach Photographer and the creative was designed and produced by Reach’s in-house design studio, by Angela Burns.

Sonia Armstrong from Belfast City Airport alongside Jonathan Eakin, Commercial Director at Reach, unveiling the new brand campaign for Business Live, which is a Reach website.