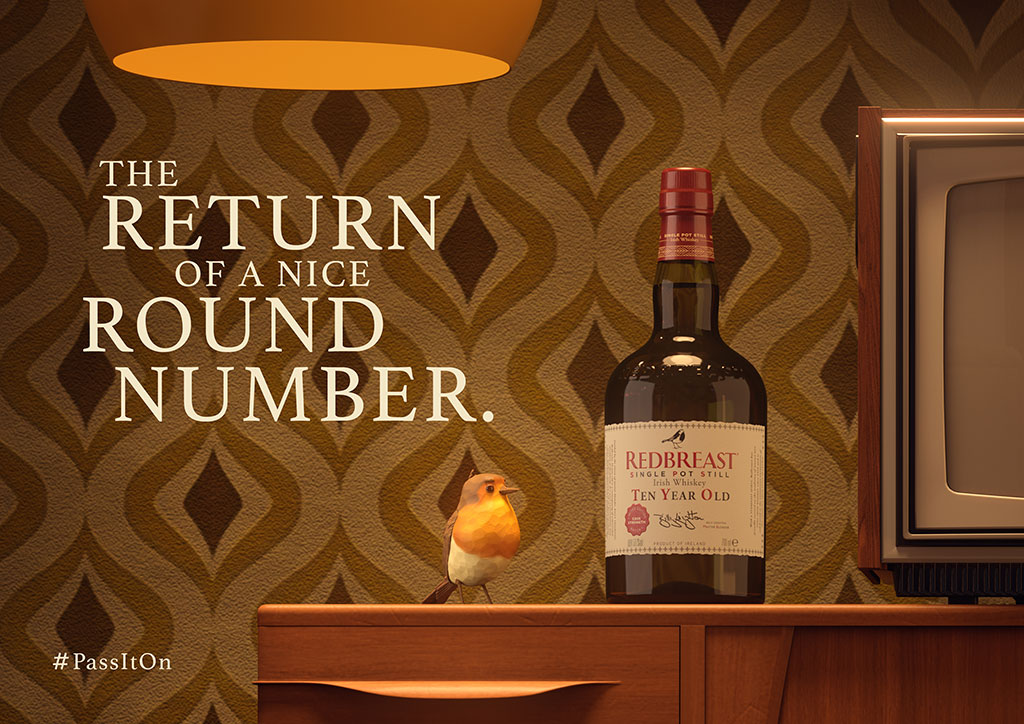 Independent creative agency The Public House have helped Redbreast Whiskey launch its limited edition bottle of Redbreast 10 Year old, a re-imagined expression of the original whiskey that was last distilled in the 1970s. A social and digital campaign has been created for the launch, transporting you back to the retro era when 10 Year Old was first created. The retro bottle design was created by London based packaging agency Nude and available exclusively via The Birdhouse, Redbreast’s online membership platform.

Irish Distillers entrusted The Public House — who recently brought the iconic Robin Redbreast to life through a global campaign — with creating an impactful campaign to launch the limited edition bottle which was last seen a half century ago. The Public House worked alongside Jelly London to deliver an integrated social and digital campaign. At the heart of the campaign is a retro-style teaser and launch video embracing the era, and the Robin Redbreast even gets into the spirit with a grooming re-design of his own.

“Taking our lead from the label and liquid being a reflection of the original 10 Year Old release, we wanted the launch comms to feel old school as well. We chatted with Carol Quinn in the archives and got a sense of what whiskey ads and production value looked like back then, although we stopped short of putting in a crystal ashtray, of course,” notes Jarrod Banadyga, Creative Director, The Public House.

Kate McCarthy, Global Marketing Manager for Redbreast and Powers Irish Whiskey at Irish Distillers added: “This is a special release for us, and testament to the power of Redbreast fans to bring back a relic from the past. A nostalgic rollout with our friends at The Public House was a nice change of gears and a unique challenge, and it’s great to see how Redbreast fans have responded.”

The limited edition Redbreast 10 Year Old went on sale exclusively via The Birdhouse, Redbreast’s online membership platform on Thursday 11th March and sold out within a few hours. Bottles were priced at €100.