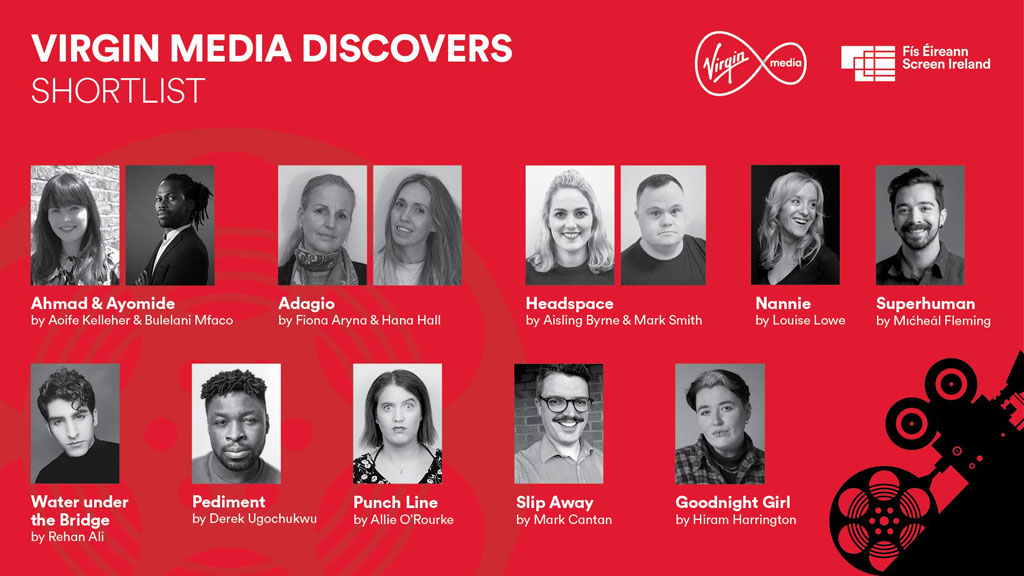 Ten new submissions have been shortlisted to participate in the 2021 Virgin Media Discovers & Screen Ireland Short Film Competition which has an overall fund of €150,000.  The shortlisted projects, selected from over 600 entries, will each now receive €9,000 to further evolve their ideas with a script writer, with two of these projects ultimately to be chosen by a renowned judging panel for final production The winning films will be broadcast on Virgin Media Television and on Virgin Media on Demand as part of the Virgin Media Dublin International Film Festival 2021 programme of events. This year, the competition is even bigger through a partnership with Fís Éireann / Screen Ireland, offering support to develop scripts and bringing new film concepts to a wider audience, which is at the heart of the prize fund this year.

According to Paul Higgins, Vice President of Virgin Media Ireland:“We’re thrilled to be supporting a remarkable group of writers and film makers at a crucial stage in the development of their work.  By providing the funding, support and national broadcast platform, we hope the Virgin Media Discovers Short Film Competition will have a significant impact on the advancement of these ten projects.  I’m uplifted by the courage of these ten filmmakers and their treatment of diversity and inclusivity in their subject matter, while they are fighting to be heard and make a change, and we’re very happy to be in a position to help broaden the awareness and appeal of their work.”

Andrew Byrne, Television Project Manager, Screen Ireland adds: “We are delighted to support a broad, diverse collection of film projects and filmmakers as part of this year’s Virgin Media Discovers Short Film competition in association with Screen Ireland. Investing in new and pre-existing talent, building careers and reaching new and wider audiences both locally and internationally, is at the heart of this film scheme, which is funded as part of the TV production stimulus funding announced by Screen Ireland last year.”

From a total prize fund of €150,000, 10 shortlisted projects from new and established filmmakers will be given €9,000 each to invest in the development of their scripts from Screen Ireland. €90,000 in total will be invested in script development. Two winners will be selected from these final scripts by the judging panel in March and will win €30,000 worth of investment each to fund the production of a 10-minute short film based on their scripts, also supported by Screen Ireland.