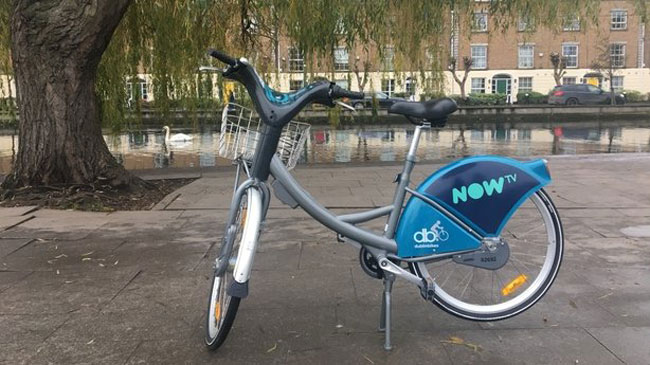 Dublin City Council and JCDecaux have announced a three year deal which will see NOW TV become the new sponsor of the dublinbikes scheme.

NOW TV dublinbikes will be visible on the streets of Dublin from January 19 2021. JustEat.ie was the previous brand sponsor of the popular scheme.

The partnership with NOW TV will support the launch of a new dublinbikes user experience in January which will see the introduction of a new App and a refresh of the dublinbikes website. The new user friendly App is a major step forward for the scheme as it will allow subscribers to release a bike from their smart phone for the first time as well as providing new and improved features.

According to Sarah Jennings, marketing director NOW TV: “NOW TV is delighted to be partnering with dublinbikes.The dublinbikes scheme gives the people of Dublin the freedom to discover the city on their own terms. Much like dublinbikes, NOW TV’s aim is to give people the freedom to choose their own entertainment on their own terms and we’re very much looking forward to being part of this hugely successful scheme as it continues to prosper over the next three years.”

“We are very pleased to welcome NOW TV as the new commercial partner for dublinbikes. In January 2021 we will launch our new user experience to make the scheme even more convenient and accessible to a wider audience, something that NOW TV have a lot of experience of doing in the TV market and we look forward to working with them on this and other development projects,” adds Joanne Grant, managing director, JCDecaux Ireland.