This week we take a look at increasing levels of mobility reported by sources including Locomizer, TII and TomTom. We reveal results of new research conducted on our behalf by Ipsos MRBI into consumers’ day to day lives under Level 5 restrictions and report on some positive retail data in Q3 for Dublin.

Locomizer mobility data is based on analysis of mobile phone location data via anonymised app reporting. Latest figures (w/e 8th November) show that the auto mobility level in ROI, which is calculated though a combination of mobile users, time, and signals, is at 67% of where it was pre-COVID-19 recorded at the end of February, and up from 54% the previous week. Dublin is performing above average at 73% (+12%) as is Cork City (69%, up 14%) and Waterford (77%, up 10%). Weekly mobility is up in all counties bar Kerry (-3% to 68%) and Laois (-6% to 49%).

The TomTom Traffic Index provides detailed insights on live and historic road congestion levels in cities around the world. Congestion levels in Dublin average at 31% w/e 8th November up from 22% the previous week during the Halloween school holidays. It is down just 5% from the pre-Level 5 figure recorded w/e 18th Oct. It is 70% of the standard daily congestion level in 2019. The first three days of this week (Nov 9-11) have seen an average congestion level of 34%. 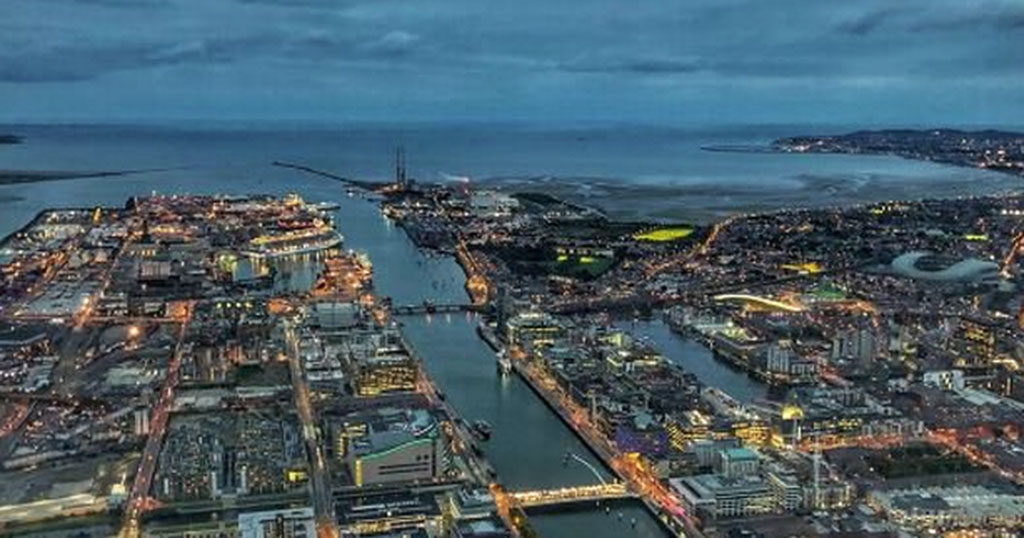 TII’s latest traffic trend information is generated from a sample of ten traffic counters located on the national road network. Daily data for Thursday 12th November informs that car traffic figures generally show a continuation of the growth experienced last week following the end of the mid-term school break. Overall across a majority of the traffic counters volumes are returning to the levels experienced before the implementation of Level 3 restrictions. 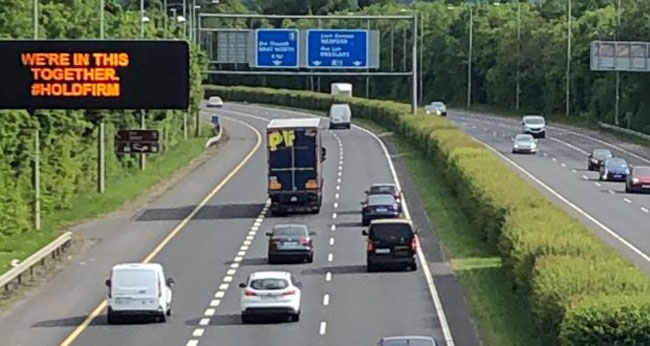 Elsewhere in its latest Transport Bulletin the CSO reports an increase of 0.9% in the volume of cyclists in Dublin city during off-peak hours in October 2020 compared to October 2019. There was a +40% increase in the number of new private cars licensed in September compared with the same month last year.

New research conducted by Ipsos MRBI as part of our iQ research programme has shown that Dubliners are determined to continue with as normal a life as possible under Level 5 restrictions. At the forefront is exercise and getting out and about in their local vicinity.

81% of the 300 respondents are likely to be seen enjoying walks in their neighbourhood in the coming weeks, peaking at 87% among 25-34-year olds.  60% are likely to be engaging in other forms of exercise outdoors such as running or cycling. Again, this peaks among 25-34-year olds, at 68%. More than half will spend time in a public park or playground. Playgrounds are of course one of the locations open in this wave of restrictions that were not open during the most severe restrictions back in March/April.

Almost 80% will be shopping in a supermarket in the next few weeks and more than 40% expect to be visiting facilities such as banks and post offices during that same timeframe.

All in all, the research points to a population still active, still moving around and still conducting day to day life, albeit in a more localised manner.

According to Mastercard’s SpendingPulse report, produced on behalf of the four Dublin local authorities, retail spend in the capital rebounded strongly in Q3. 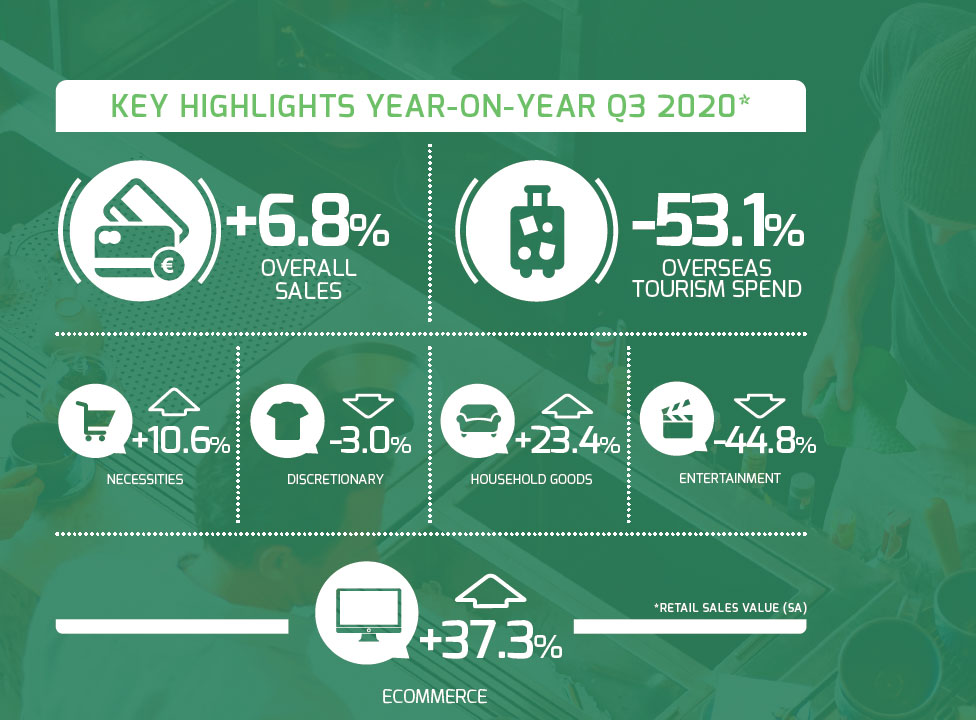 In the three months to the end of September, sales increased by almost 22% in Dublin compared to Q2 of this year to reach a new peak. The report points to the easing of COVID-19 restrictions which improved trading for bricks-and-mortar retailers.  Comparing Q3 to the same period last year, sales increased by 6.8%.

Necessities spending decreased by 5.2% compared to a strong performance in Q2 yet recorded a 10.6% increase year on year. Entertainment expenditure witnessed the biggest reduction recording a 44.8% decline in spend when looking at figures from last year.

With a similar picture now being witnessed as part of Level 5, we can expect a busy month in retail spending in December as people begin to engage in the physical shopping experience once again in the lead up to Christmas.

In other retail news, taxback.com has released the results of a recent survey that shows a majority of consumers will strive to support Irish businesses and the domestic economy in the run up to Christmas.

Over two thirds (68%) of the respondents to the survey claimed they will or will try to buy Irish as a result of the pandemic.  However, price sensitivity is an issue with one in five (20%) stating the price must be affordable for them to buy Irish. 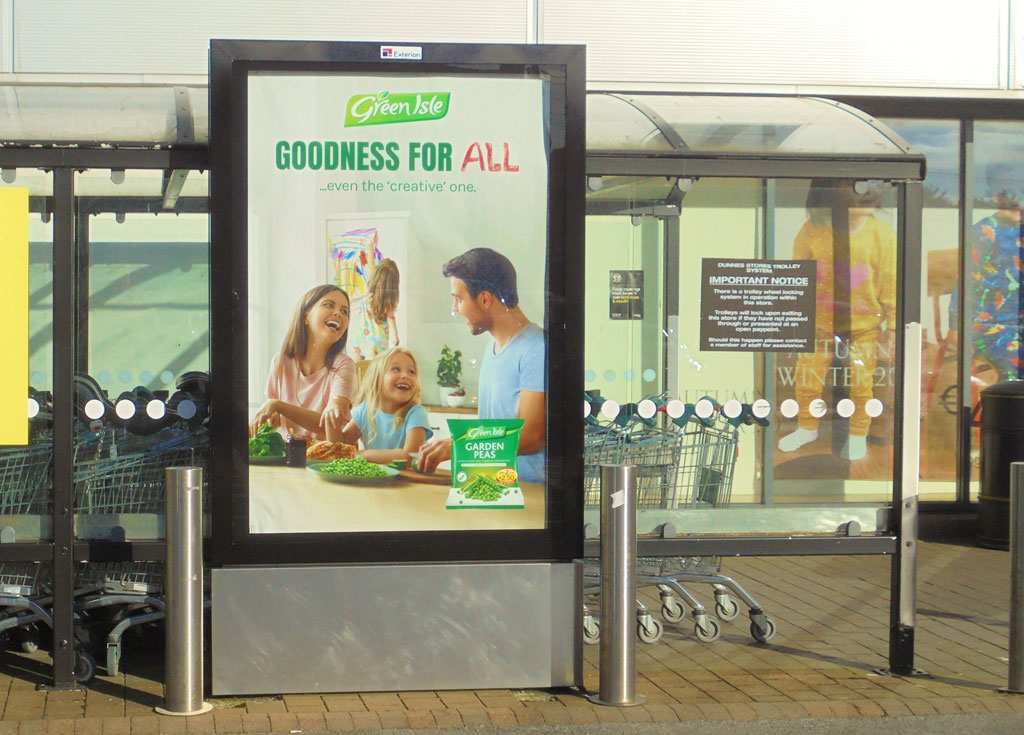 With a huge drive to shop Irish this year, Irish brands and advertisers can leverage their Irish credentials and pricing within their marketing communications. Advertisers can build awareness of these more pronounced USPs with Irish consumers primed and focused to support Irish businesses this year. OOH can be a valuable mechanism in communicating these points with its ability to build awareness with relative ease and gives companies a local, regional or national platform to help increase consideration and drive sales.

Researcher and author, Justin Gibbons recently published a new book, P²+C=5, that was launched and discussed at a recent webinar facilitated by JCDecaux UK.  In this, he explores the formula marketers need in the search for effectiveness.

Written during the worst of the COVID-19 pandemic in March, the evidence pointed to a new solution for a new point in time. The research is a new framing, away from brand and response, to something more tangible. 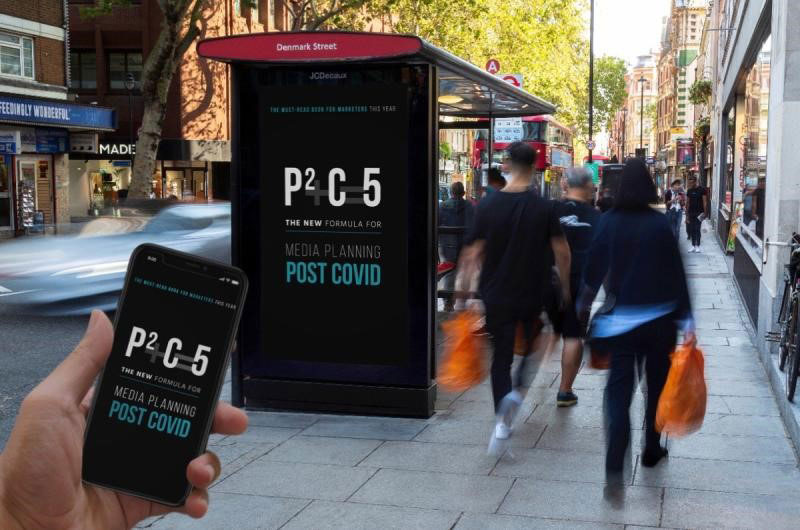 Dissecting the new formula, the Ps stand for public and private media. Public media, for example OOH, is generally consumed in a public forum and conveys trust, familiarity and fame. The book outlines how public media acts as priming or signalling for private media, and can make media such as mobile, social and online work harder.

In essence, the public media amplifies the private media and intensifies the outcomes for brands, hence the term P².

Looking to the second part of the equation, the C is for creative. As broadcast channels such as OOH become increasingly digital, creative is easily portable and transferable across platforms. This makes the channels of public and private media easier to plan and by using the same distinct creative and context across platforms, it can prime audiences in their initial exposure in high attention channels. In research highlighted in the book, high-attention channels such as OOH were found to increase engagement with low attention channels. This priming effect led to a 52% increase in overall attention.

If P²+C are applied, there are then five enhanced outcomes; trust and brand familiarity, attention, awareness, consideration and activation.

Author Justin Gibbons, commenting on the book said: “This book is a call to arms. It is also a wake-up call about the gap between what media planners know to be best practice in creating sustainable brands, as referenced by leading marketing experts such as Binet and Field and Byron Sharp, and what actually happens in media departments solely focused on short-term return on investment. In our rapidly changing world, it analyses how brands can prosper and develop in a sustainable way. Now is the time to reassess and reinvent the way we do marketing”.

A picture paints a thousand words so there’s not much we can add to this other than to say how hugely impressed we were at this stunning new mural in Cork, by graffiti artist Aches. Superb. 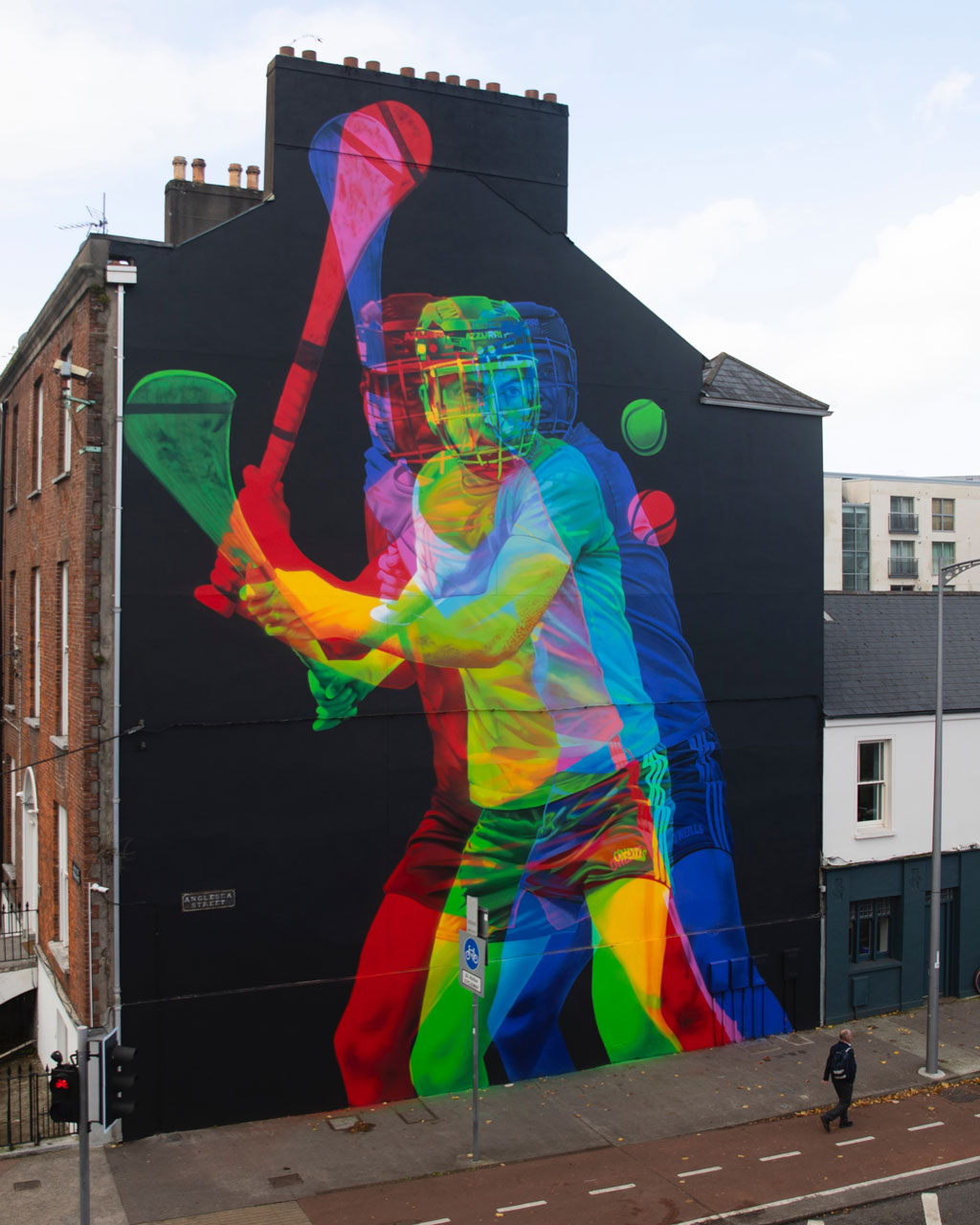