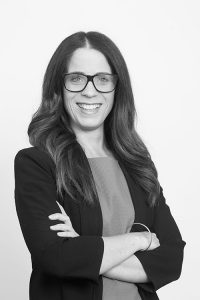 With the ink barely dry on the many advertising forecasts for 2020, COVID-19 struck, dealing a deadly blow to the advertising and media industry in one fell swoop, and rendering these forecasts redundant in the process

However, after a very challenging Q2 for advertisers, media owners and advertising agencies, the dust appears to be settling a little on the advertising landscape. Whilst uncertainties still hang in the air for the coming months, confidence seems to be rising with advertisers once again focused on allocating and planning their marketing budgets and advertising spend for the second half of this year.

Looking at the first half of 2020, the overall media ad spend as reported by Nielsen Media Ireland1 declined by 26% when compared to the first six months of 2019. Each of the media types we measure within our Ad Intel Service showed a substantial drop in spend levels year-on-year, with Cinema and Outdoor understandably experiencing the biggest drops in percentage terms. 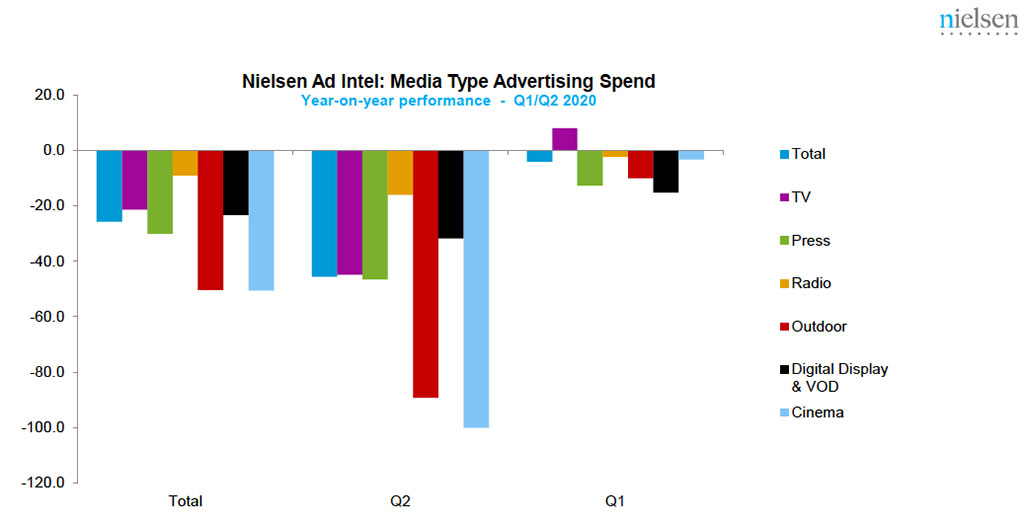 When we compare the performance of Q1 2020 (pre COVID-19 lockdown) with Q2 (post-lockdown), there was a much smaller decline year-on-year at the start of the year. Overall spend levels in Q1 were 4% lower year-on-year but the decline in Q2 was much more significant, down 46% compared to the same period last year.

TV, whilst remaining the largest media type in terms of overall spend, showed the most significant decline for Q2. Outdoor and Cinema were also hit particularly hard by the COVID-19 related Government restrictions and showed the biggest declines in percentage terms, down 89% and 100% respectively for Q2 year-on-year.

As footfall in towns and cities fell rapidly and cinemas sadly shut up shop completely, these two media accounted for almost a third of the total Ad Spend decline reported for Q2 2020.

The restrictions on movement among the general public and the change in work practices for most office-based workers had differing impacts on the various media types. Despite the negative impact of the pandemic on the advertising industry, and indeed, almost every industry in Ireland, there were, however, opportunities for advertisers and their brands.

Given the enormity of the situation the Irish Government were facing and the vital importance of relaying key health and safety messages to the general public, Irish media suppliers provided crucial platforms to reach significant numbers of people quickly; to provide important information on platforms trusted by the Irish public and in many cases, to tailor messages to local communities. Trusted mass media did particularly well, given their ability to reach the population and drive awareness.

Radio performed relatively well year-on-year in Q2 compared to the other media types for a number of reasons, including the capability to turn around new creative remotely and quickly, which enabled advertisers to tailor their messages to reflect the public mood. The strength and reach of local radio in Ireland gave advertisers a way to promote key brand messages to people located in relevant regions.

Looking at specific category trends across the first half of this year, Government and Charities saw the biggest increase in overall spend levels from Q1 to Q2, up 76% and 64% respectively. Given the reach and frequency targets the Irish Government needed to achieve to drive awareness around COVID-19 safety and the restrictions being implemented to reduce the spread of the virus, they utilised much of the available ad space left by other categories where advertisers had pulled back on campaigns.

For their part, Charities- due to a loss of major annual fundraising events- funneled their concentration into mass awareness campaigns. This buffered some, but not all, of the reductions in advertising spend in other categories year-on-year where advertisers had pulled back on their investment.

The two categories that showed the most significant decline in spend from Q1 to Q2 were Vehicles, which was down 68% and Mortgages/Related Products, which were down 87%. These declines reflect the uncertainty in the landscape and a reluctance by many consumers to make significant personal investments. Again, trusted, mass media did particularly well with their ability to reach the population and localise the message via regional specific channels to gain attention and drive awareness.

Unsurprisingly, Retail was the top spending major category for Q2 as many consumers rushed to stockpile or prepare to spend more time working from home. However, despite ranking as the highest-spending category, Retail had by far the biggest decline year-on-year for the Q2, down by 54%. 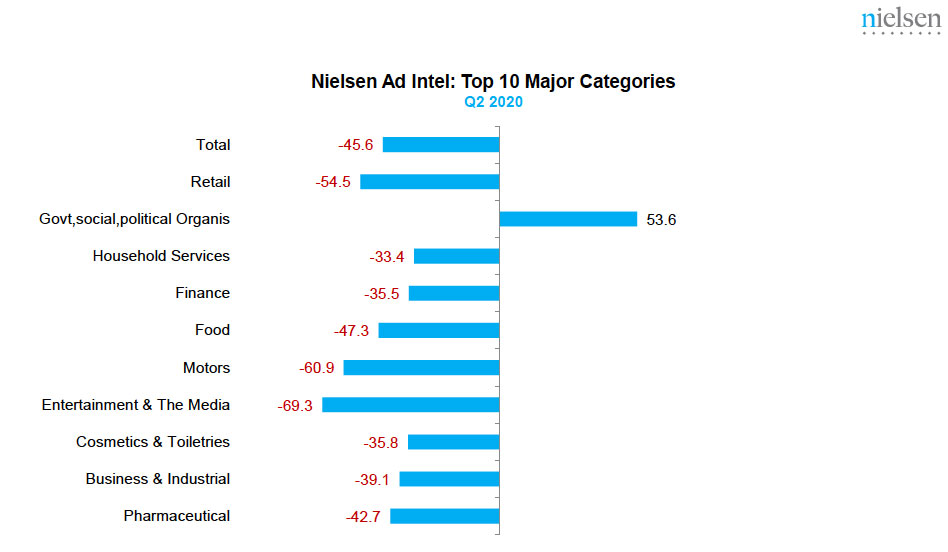 Among the top spending sub-categories within Retail were Supermarkets, Grocery Chains and Chain Restaurants (ie those with takeaway options), Book Stores and DIY Stores. Although Supermarkets were also in decline, they still represented 56% of the overall Retail spend for Q2.

Ad spend levels for Supermarkets for April increased year-on-year on Radio & digital display2, up 58% and 37% respectively. Whilst also sitting amongst the top-spending sub-categories of Retail, the biggest driver of Retail’s year-on-year decline for Q2 were Chain restaurants (-87%) and Household Furnishings (-90%).

With many people forced to work from home, food became one of the few joys during lockdown as consumers became more adventurous with their home-cooking, with baking, in particular, becoming a pastime for some.
The Nielsen figures show that within the Food category, sub-categories like Prepared Food Range and Butter saw exponential growth in spend in April 2020 compared to the same month last year.

The top two major categories in terms of overall ad spend in Q2 were Retail and Government/Social/Political, accounting for a combined share of 36% of the overall spend in the quarter. The continued investment by Government and Health Bodies was no doubt driven by the need to continue to circulate COVID-19 messaging and health/restriction warnings to keep active cases of COVID-19 down.

To analyse the data for the beginning of the recovery of the market, let’s first look at the impact of lockdown on April’s advertising performance year-on-year for comparison.
Retail took the biggest hit, down 62% in April 2019, with Household Furnishings, Supermarkets and Chain Restaurants the biggest drivers of the decline. Entertainment also took a massive hit, down 73%, albeit off a slightly smaller base than Retail. Its decline was driven by the closure of cinemas, art galleries, exhibitions and other activities that rely on a gathering of people.

Elsewhere, Travel and Transport took a huge hit; with spend levels in April down 86% compared to the same month last year. Holidays in Ireland saw the biggest decline in spend levels, down 79%, with Airlines reporting the sharpest percentage year-on-year decline at -97%, albeit off a smaller base. Whilst typically a busy time of year for people planning and booking holidays, the uncertainties of what lay ahead meant that advertising spend for this category diminished.

In addition to Government, smaller sub-categories also took advantage of the additional ad space that became available in April. Phone and Internet Banking drove awareness at a time when consumers needed to access their day-to-day banking remotely and spend in this subcategory doubled year-on-year in April.

As many people found themselves starting to lose sleep over the various stressors brought upon by the Pandemic, we saw advertising spend for sleeping aids increase by 100% year-on-year in April. Health became a bigger focus than ever before for the nation and private healthcare companies also increased their spending on advertising, with an average monthly increase year-on-year of 35% from April to June 2020. 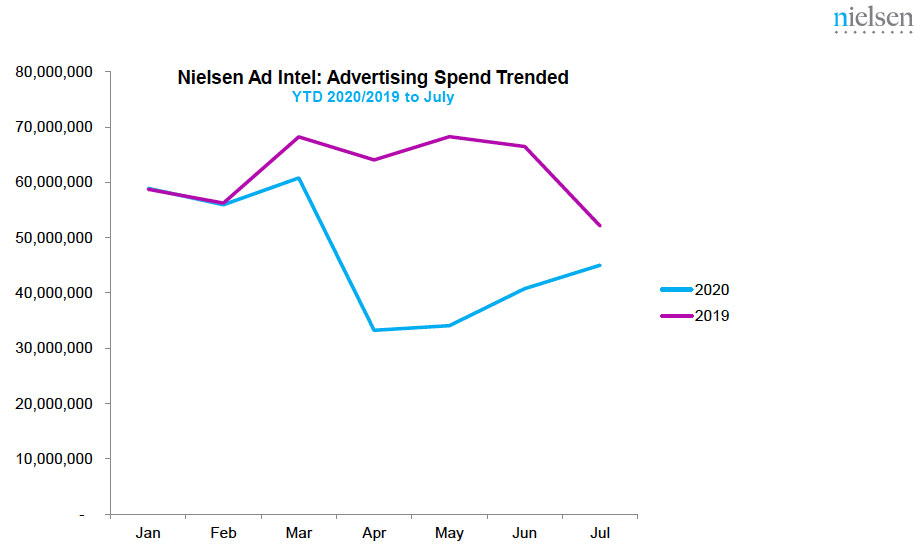 Following a very difficult second quarter this year for the advertising industry, the good news is that ad spend levels are beginning to increase and we are seeing signs of recovery. Looking at June versus April, overall spend increased by 23% with TV, Radio and Outdoor all showing the highest uplifts. In percentage terms, Outdoor shows the biggest recovery as footfall on our streets increases nationally, and advertising messages are once again, appearing on the larger traditional formats.

Although still in decline year-on-year, Retail and Household Services surpassed government spend levels in June. With the lifting of government restrictions to allow for staycation destinations in sight, advertising for the Travel and Transport sector, one of the hardest-hit categories throughout the pandemic began to recover. Spend levels in June were over double the levels observed in April. The Holidays Ireland sub-category was by far the biggest driver of new ad spending. With an increase of 113% compared to April 2020, it represented just over half of the overall spend in June within the Travel and Transport category.

As more shops opened their doors, Retail also showed signs of recovery. Spend levels in June were 31% higher than April with Betting Shops, House Furnishings, DIY Shops, Electrical Retailers and Fashion being among the categories to increase spend. The trend in the Retail category was driven by an increase in confidence among advertisers and their willingness to spend again as government restrictions lifted.

Again, looking at June versus April, Motors was the biggest driver of growth, up 702%. The category accounted for almost a tenth of total spend in June. Seasonality is always an important factor with this particular category, but as the country begins to open up again and much of the population returns to work, the volume of cars on our roads is increasing.

As COVID-19 continues to be a part of our daily lives and as the nation continues to experience Government-imposed restrictions, uncertainty and lack of visibility remain a concern for many advertisers. This makes it difficult to predict what the second half of the year might look like.

However, as we head into to the all-important Halloween and Christmas season, we are starting to see green shoots in some categories as advertisers look to gain cut-through, take advantage of the additional value available and, hopefully salvage something from what has been a year many in the advertising industry will want to forget.
Elisa Daly is Ad Intel Lead, Nielsen Media Ireland

Please note, the Advertising Spend figures reported in this article are not actual revenue figures. They are based on Nielsen Media Ireland’s coverage and a defined methodology for each Media Type, which is agreed and continually reviewed with key industry stakeholders. The reported spend figures are indicative only but provide valuable insights on Ad Spend trends over time by Media Type across Categories, Advertisers and Brands.
2Digital Display excludes Search, Social & Classified