This week the government announced its six-month plan for living with COVID-19. On the 5-level scale, Ireland currently sits in level 2 with the capital being elevated to level 3.

The Resilience and Recovery framework, which aims to provide guidance on economic, social and cultural life in the medium-term, came with new restrictions and easings. It was good news for leisure environments with wet pubs reopening, sport spectatorship back and gatherings in larger numbers allowed across the country.

Dublin will have tighter restrictions heading into level 3. However, with retail and other services permitted to stay open and the use of outdoor play areas and parks remaining, we envision Dubliners’ patterns or movements won’t be too severely hampered in the coming three weeks.

The TomTom Traffic Index provides detailed insights on live and historic road congestion levels in cities around the world.

Last week’s congestion level in Dublin at 38% is the highest recorded since the outbreak of the pandemic and up from 26% four weeks previous. It was 14% less than the standard weekly congestion level in 2019. On Monday evening, TomTom reported post-work commuters faced long delays as nearly 200 traffic jams were reported across the capital.

Latest data from Locomizer, based on analysis of mobile phone location data via anonymised app reporting, shows that auto mobility levels in ROI, which are calculated though a combination of mobile users, time, and signals, have stabilised at 88% of where they were pre-COVID-19. 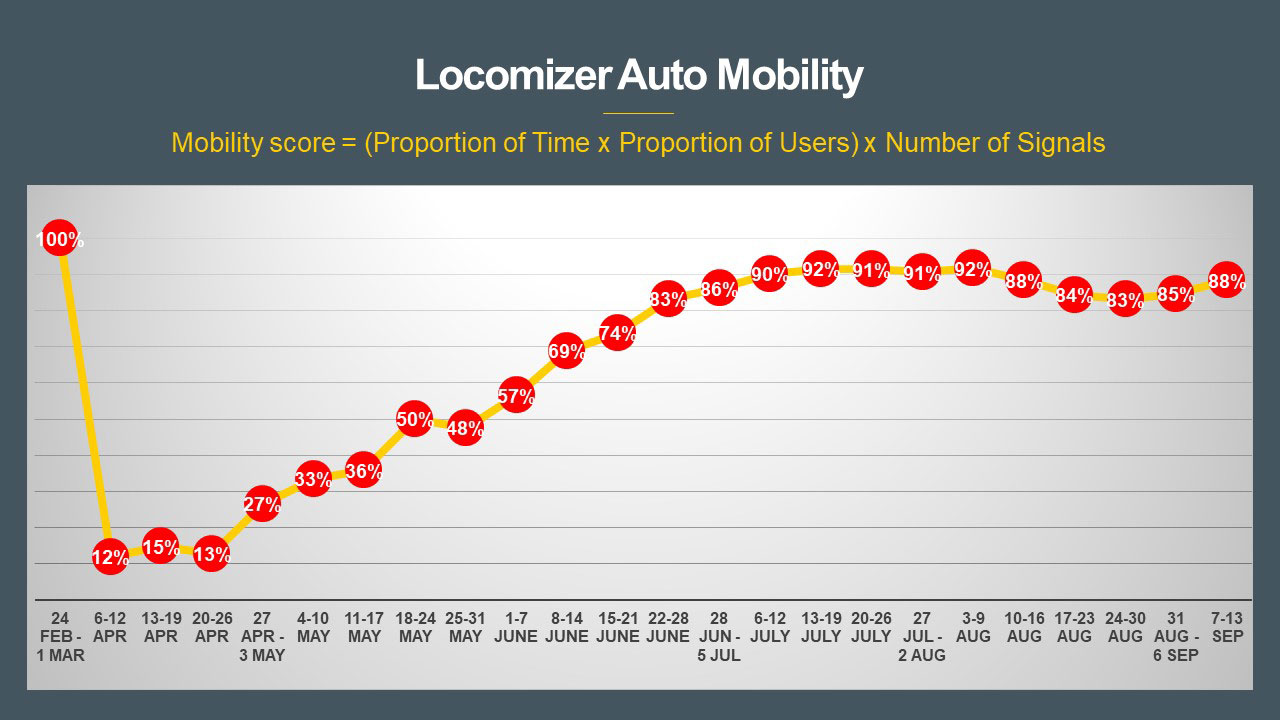 TII’s latest traffic trend information, generated from a sample of ten traffic counters located on the national road network, finds that as of Tuesday 15th September, car traffic volumes rose by 2% in past week and now stand at 83% of the equivalent day in 2019.

Based on insights from the COVID-19 crisis and how the city could look post COVID- 19, the Dublin Chamber of Commerce has introduced the idea of a 15-minute city. The planning vision focuses on creating more liveable and walkable communities, and through strategic planning, people would be able to access work, shops, essential services and leisure facilities in a 15-minute walk or cycle from their home.

With the population of the Greater Dublin area set to grow by 20-25% to 1.41 million by 2040, the Chamber’s plan looks at how the city could become more people and community centric. The chamber’s idea is to halt segregated planning, where residential areas are separated from retail, employment and entertainment hubs. 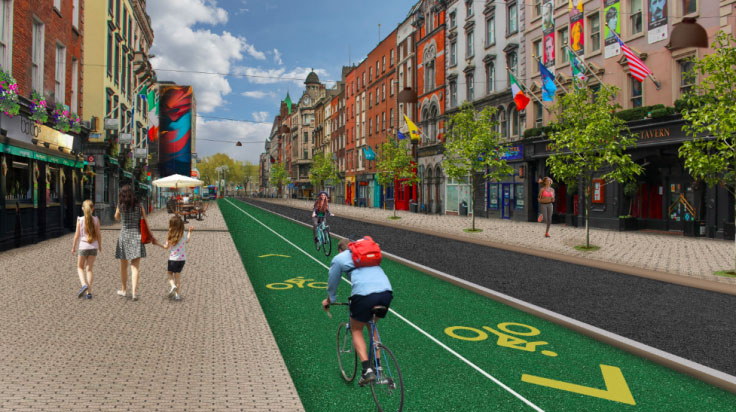 How Dame Street would look under the 15-minute plan

The plan encourages a more integrated approach to the use of areas where residents have access to transport hubs, well connected footpaths and cycling paths and access to facilities and services, rather than areas and districts having a limited or sole purpose such as office districts, residential areas, shopping zones and entertainment streets.

Active transport plays a vital role in the vision of the 15-minute City. The report outlines how most journeys generally start first with a walk, whether that is the full journey or a short walk to access a bike, car, or public transport. Having a high-quality public realm and facilities that promote active transport is necessary to effect modal change the report outlines.

Looking at international examples the report mentions a number of other cities that have adopted similar designs such as Melbourne’s 20-minute neighbourhood and the acceleration of plans in Paris for a 15-minute city in light of COVID-19.

A proposed reduction on the city’s speed limits to 30KM/h has been amended to allow 40KM/h on key arterial routes in Dublin.

Dublin City Council has progressively introduced the 30KM/h speed limit to many areas in the city centre and in residential areas. The Council had proposed extending the threshold to other major approach roads as a Covid-19 mobility measure to encourage more walking and cycling. However, an amendment of a 40kM/h limit on commuter routes is now to be considered after consultation. 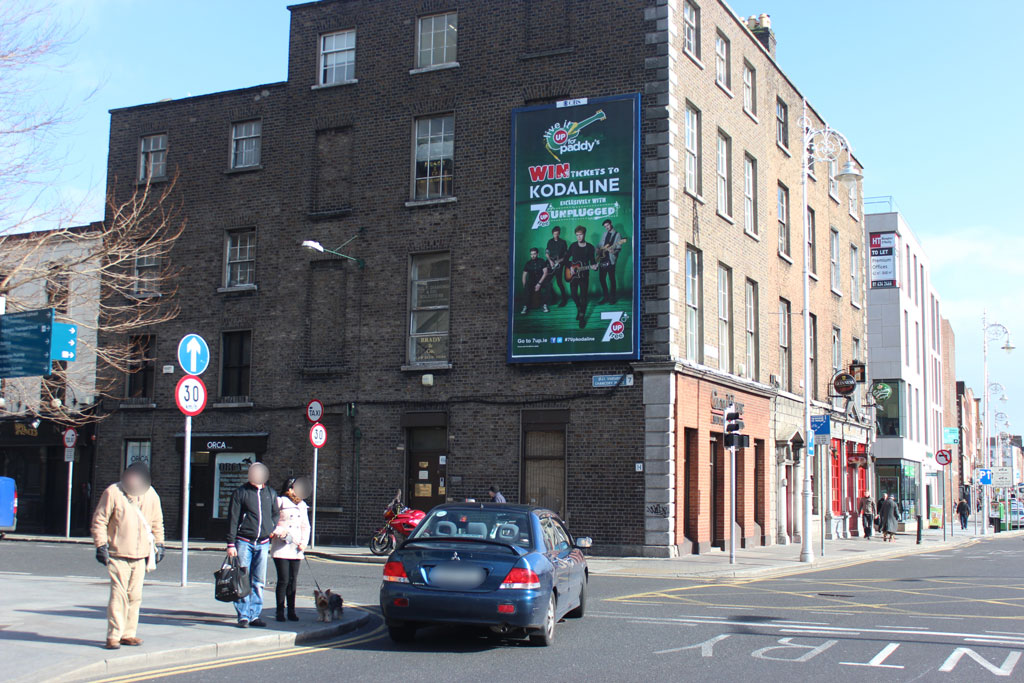 Gearing up for the Christmas Period

It’s a cliché to say Christmas starts earlier every year, however it seems planning and shopping for the festive season is indeed starting earlier this year.

A survey conducted by Kilkenny Designs found that 60% intend to start their Christmas shopping earlier than usual while 30% have already began shopping for gifts.  The retailer released the research nuggets as it announced it would be opening its Christmas shop a month early due to customer demand. Brown Thomas has also opened its Christmas Shop in Dublin, Cork and Limerick – with 99 days until December 25th.

In recent years, Black Friday has also been embraced by the Irish consumer and this will be another key retail period in the run up to Christmas that advertisers and retailers can benefit from.

With shopping for Christmas starting earlier this year, advertisers and brands should strategise for the weeks ahead on how they can best highlight their offerings during this time of spend.

By placing ads in prime locations and environments, brands can target a large, diverse group of people who are already on the path to purchase and those in-market audiences looking for gift ideas and inspiration. Broadcasting deals via OOH can provide an opportunity to stand out from the crowd and increase noticeability for both instore and online retail channels.

OOH can also be a powerful mechanism for advertising at Christmas, adding to the festive landscape, interjecting excitement and raising awareness of products and goods especially for FMCG in the short-term lead up to Christmas. 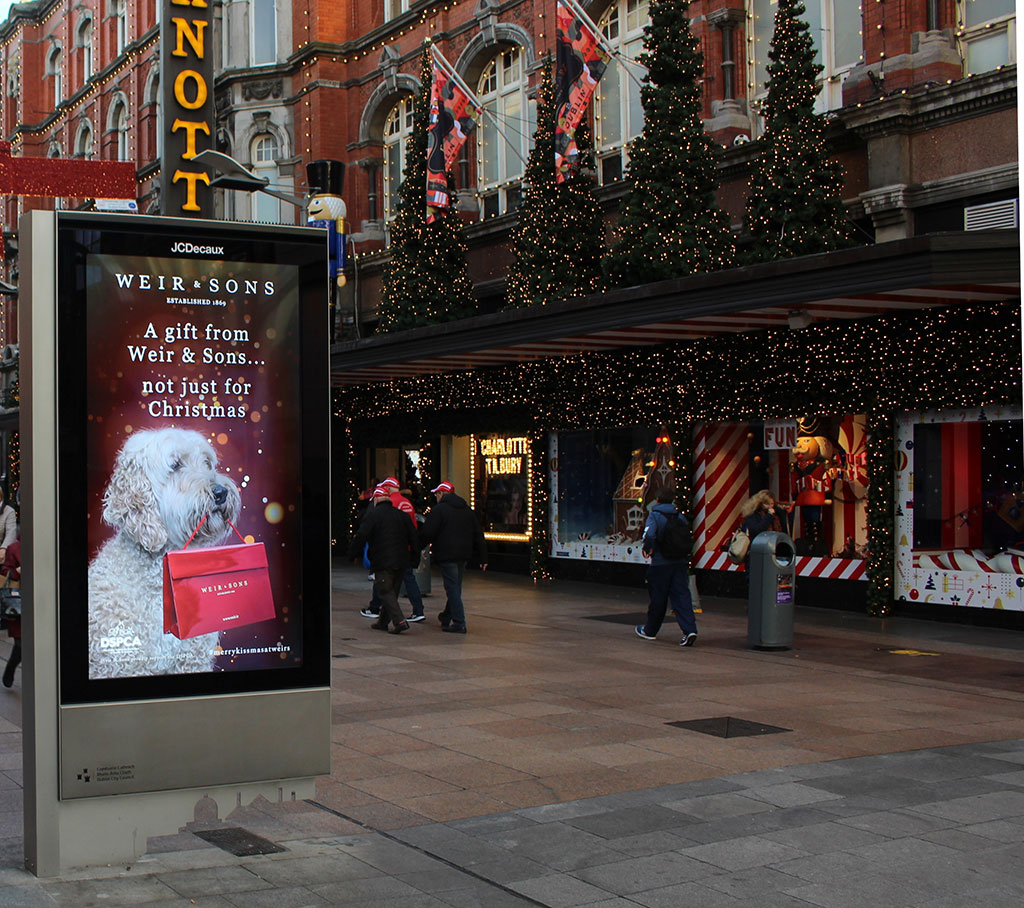 In Brands We Trust

In Deloitte’s latest consumer behaviour tracker, the emerging consumer section points to an uptake in the purchase of name brands.

In the report, nearly half (46%) of Irish consumers state they will purchase named brands they trust and know.

Brands who have responded well to the crisis are also in favour with Irish consumers, with 46% stating they will purchase more from these brands. As pointed out in previous editions of this series, consumers are on the hunt for deals and the best value from retailers with 45% stating they would buy a non-essential item if they found a great deal.

In the current climate, audiences are seeking out brands they trust and are familiar with. Being in the public realm, audiences tend to trust brands that they have seen advertised on OOH. 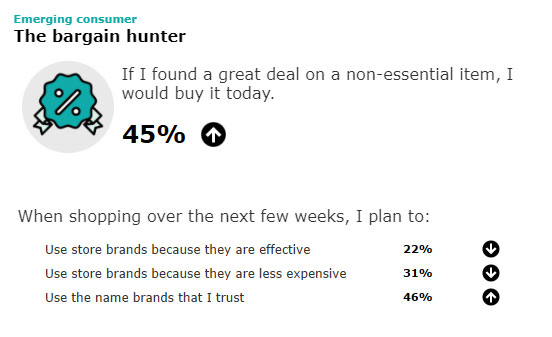 Research published this week from sponsorship agency Onside shows 46% of the Irish sports industry believe major sports events will proceed with reduced capacity of 25% attendance across the remainder of 2020.

Looking at the impact of COVID-19 on sponsorship, encouragingly 17% have entered into new sponsorships since the outbreak began. While only 8% of sponsors said they have dropped out of an existing sports sponsorship.

The industry research found AIB and Musgrave’s GAA partnerships and Bank of Ireland and Vodafone’s recent rugby initiatives were the stand-out sponsorships over the last two months. 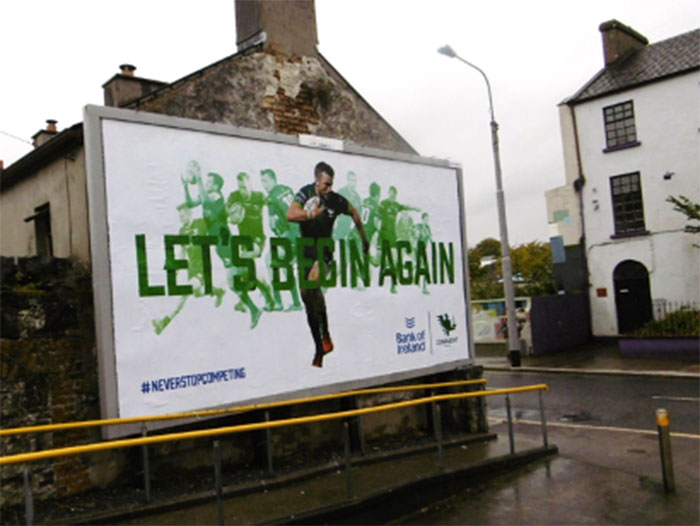 With a jam-packed sporting schedule to get through at the back end of 2020 and a limited number of spectators allowed, OOH is an ideal medium to raise awareness of sport sponsorship and create meaningful connections with sporting communities on a national and regional level.

OOH can amplify sponsorship ties and show virtual support for teams or leagues, reigniting interest and engaging fans.  Digital and Dynamic OOH can showcase sports content, building connections with audiences and bringing them closer to their sport.

As part of our Now, Near, Next thought leadership series, we have continually carried out bespoke research to investigate the views and opinions of the Dublin population to help our clients gain insight into consumers, at a time when consumer behaviour and habits have shifted dramatically and beyond anything we’ve seen before.

In our latest wave of research, we delve into the future intentions of the Dublin population on a range of activities to gauge their intentions for the next 6 months. This week we take a look at mortgage intentions and peoples’ intentions to socialise in person more in the coming months.

Nearly one fifth (18%) of Dubliners state they are likely to get a mortgage in the next 6 months. Looking to audience profiles, over a quarter (28%) of 35-44 years olds are planning on entering into a mortgage.  Males and males aged between 25-44 had the highest intentions levels at 34% and 35% respectively.

Looking at our Poster Impact recall levels for brands who were advertising their mortgage offerings on OOH in recent weeks, we saw an uplift in recall in the sub-category who plan to get a mortgage. Showing the true value of advertising on OOH to in-market audiences, those with a higher likelihood of going for a mortgage increasingly noted and recalled campaigns on OOH. 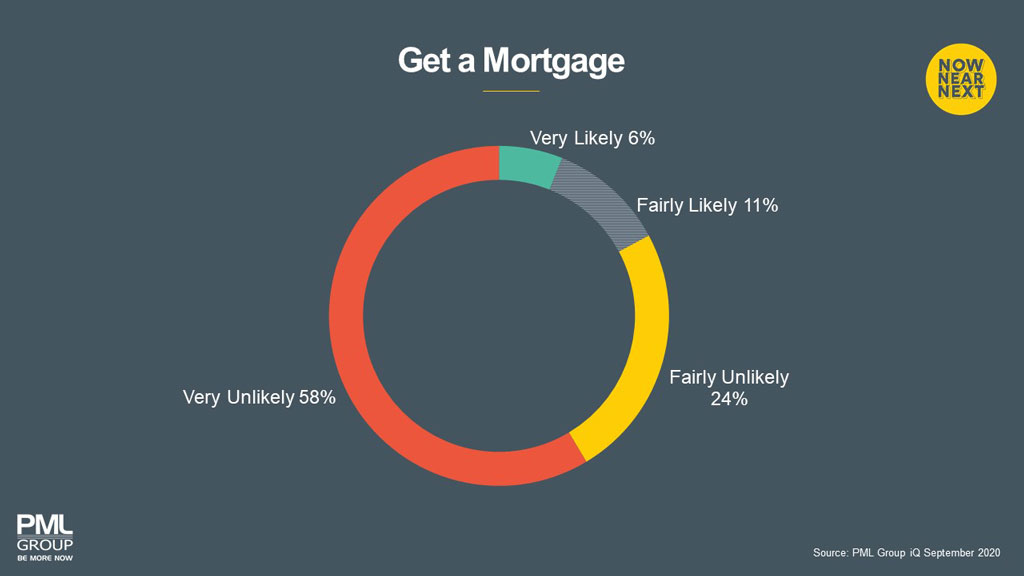 Females seem to be missing in-person interaction more with 67% intent on socialising more in person compared to 64% of males. Females in the C2 category (77%) and females in the 16-34 age group (74%) have the highest intentions levels in the next six months.

Again, delving into our Poster Impact recall levels, brands and products who are associated and closely aligned with people socialising such as alcohol brands showed higher levels of recall with those who are intending to plan get-togethers with friends.

We can expect these socialising intentions to intensify in the coming months as Dubliners are being asked to restrict their social interactions for the next three weeks. 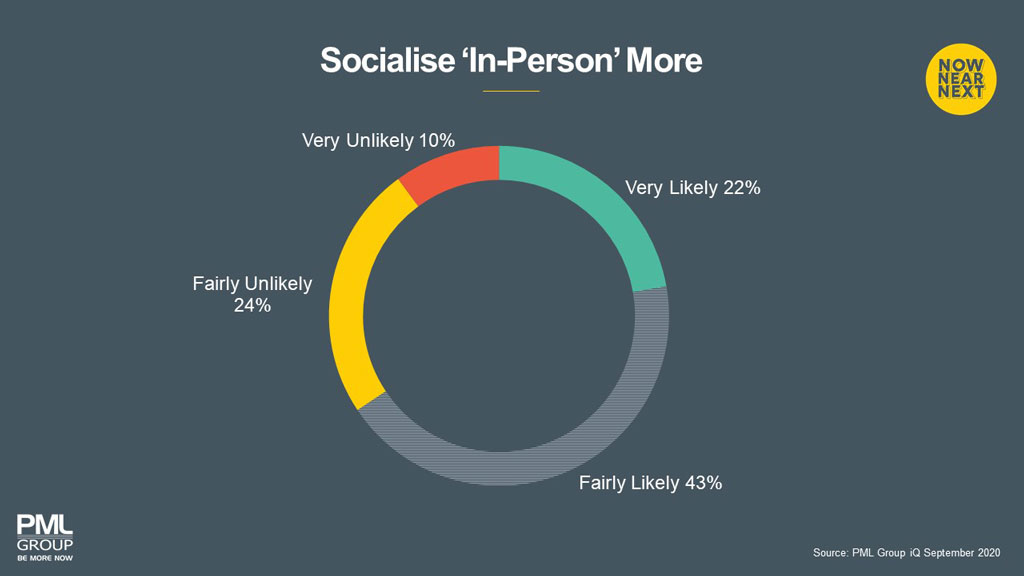 Millennials and Gen Z are Shaping a Better World

In the face of unprecedented health and economic disruption caused by the COVID-19 pandemic, millennials and Gen Z express resolve and a vision to build a better future, a new Deloitte survey finds. The 2020 Deloitte Global Millennial Survey, now in its ninth year, reveals that both generations remain resilient in the face of adversity and are determined to drive positive change in their communities and around the world. The picture that emerges from this year’s survey is complicated but hopeful: Even in the midst of crisis, millennials and Gen Z are recommitting to improving society, pushing for a world in which businesses and governments mirror their own commitments.

Younger generations take the issue of social purpose as a personal calling. In the pulse survey, respondents indicated they were taking “socially conscious” actions to benefit the planet and society.

Amarach’s latest release in its omnibus series points to how consumers are less deterred about getting out of the house compared to the summer months of June and July.

For August, consumers were more willing to engage in certain types of activities and services compared to months previous.  Over two thirds (68%) of those surveyed stated they were willing to visit a restaurant in the next week, with a similar level of respondents (65%) willing to visit clothes shops and hairdressers or barbers (62%).

A third of the respondents state they were willing to visit a pub within the next week with again similar levels showing a willingness to visit cinemas (30%) and use public transport (30%). 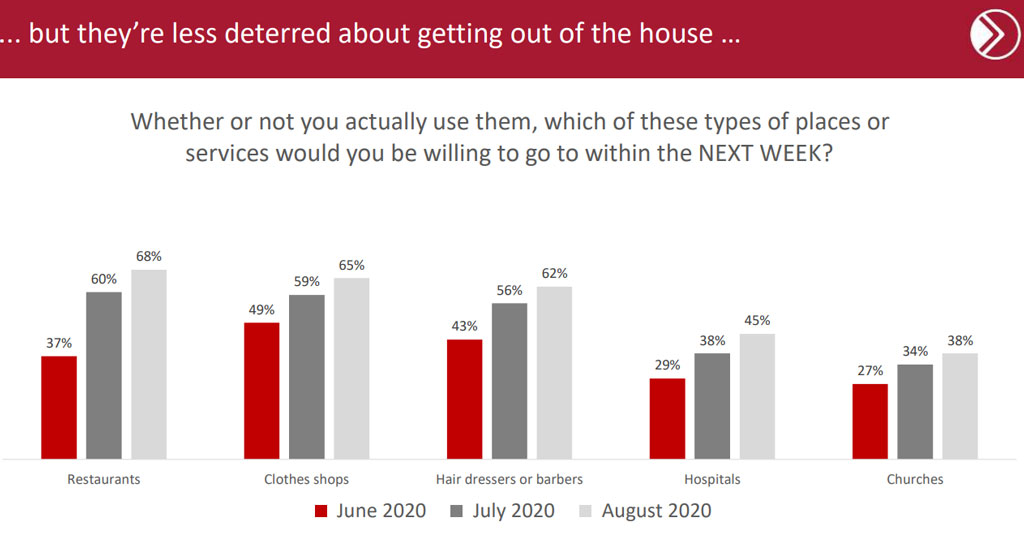 The latest edition of Checkout’s Top 100 brands showed Irish brands fared well against their international counterparts. Coca-Cola has been named Ireland’s biggest selling brand for the 16th year in a row while Cadbury and Tayto claimed 2nd and 3rd positions.

Looking at the top 25 brands, we discovered that 88% (22) of those listed used OOH as part of their advertising strategies in 2019. 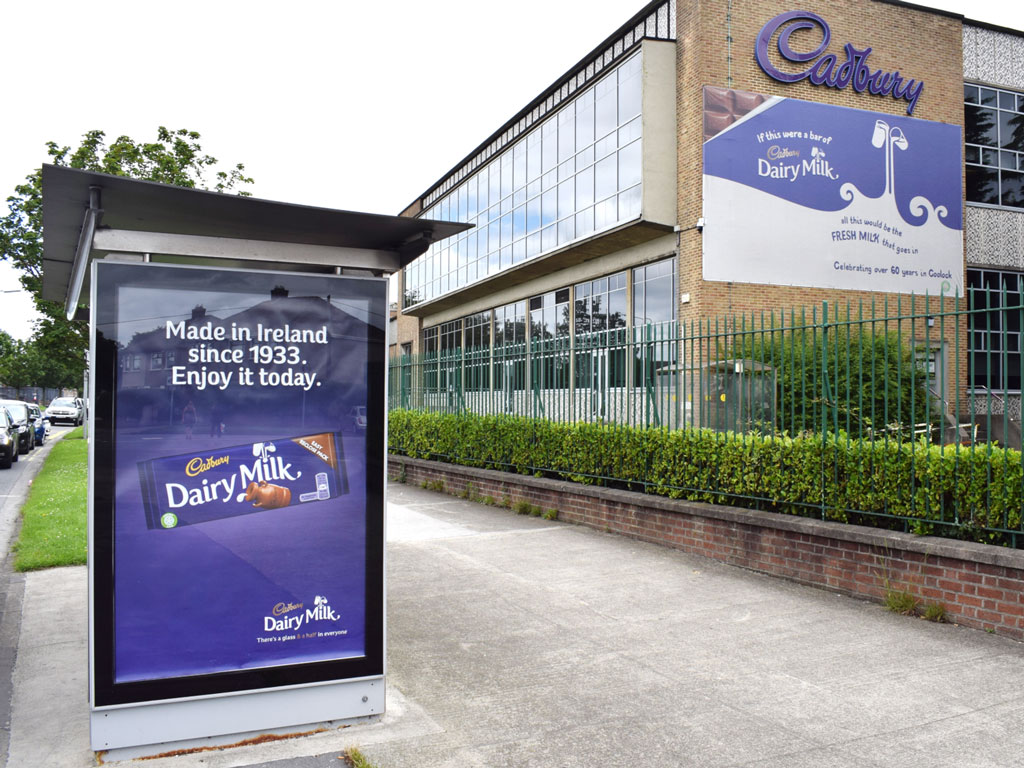 * Produced in association with Nielsen