Adapting to the New

As the season changes, the next quarter will be a busy period for advertisers, retailers and consumers. With events such as Halloween, Black Friday and Christmas coming up, delayed sports seasons to be played and pent up demand still on-going, standing out from the crowd will be of high importance in the coming months.

In a very fragmented media landscape, harnessing the power of OOH advertising to get noticed and gain competitive advantage will be even more imperative in the near as we enter a busy winter period.

In the week’s Now, Near, Next we feature our usual mix of research and trends in mobility, retail and leisure with data pointing to an uplift in audience movement and the inevitable effect on congestion. We also investigate the future intentions of Dublin consumers and how OOH can help brands make a major impact in the near and next.

National Road traffic increases by an Eighth in past week

Given the potential impact on traffic arising from the re-opening of schools, for the week commencing 31st August, TII is providing a daily update on morning peak traffic figures. The 10 roads monitored indicate an increase of 12.5% in volumes over the past seven days.

Car traffic volumes on the radial routes into Dublin are consistently up when compared with Tuesday of last week. Car traffic is up 9% on the M1 at Swords to Airport, 11% on the M4 at Celbridge-Maynooth, 13% on the N7 at Citywest and 17% on the M11 at Bray. 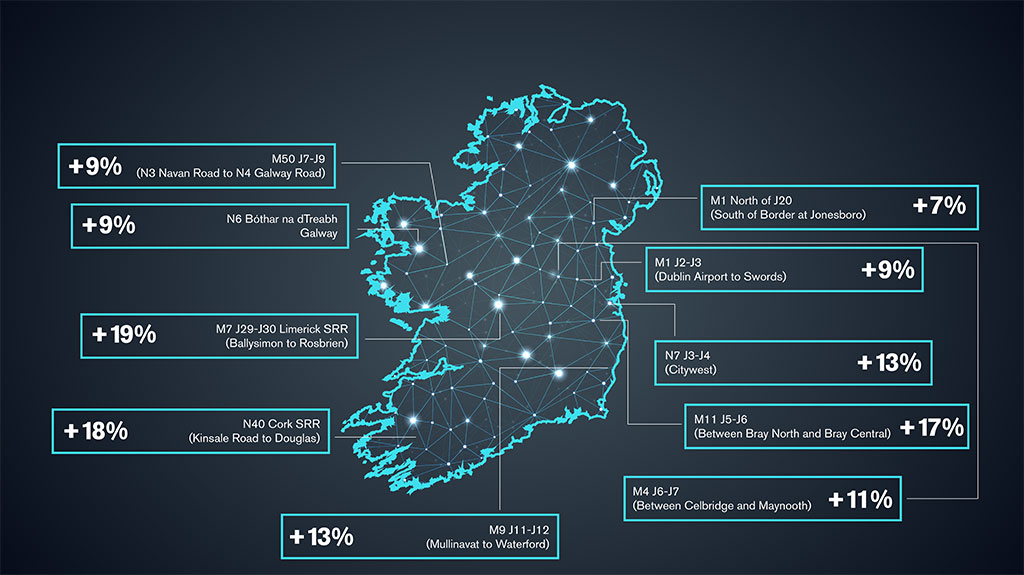 The M50 (N3 Navan Road to N4 Galway Road) shows a 9% increase as compared with Tuesday 25th August. This is broadly consistent with the growth rates recorded on the radial approach routes, especially the two closest radial routes, the M1 and the M4. In the case of the regional cities the increase in car traffic volumes on Monday morning as compared with Tuesday 25th August is as follows: M7 Limerick 19%, N40 Cork 18%, M9 Waterford 13%, and N6 Bóthar na dTreabh Galway 9%.

The TomTom Traffic Index provides detailed insights on live and historic road congestion levels in cities around the world. Wednesday’s recorded level in Dublin, at 43%, is the highest recorded since early March and up from 36% the same day a week previous and more than double that experienced at the start of June (21%). On Wednesday the congestion level across Belfast, Cork and Limerick was 30% which were all up on the previous week. 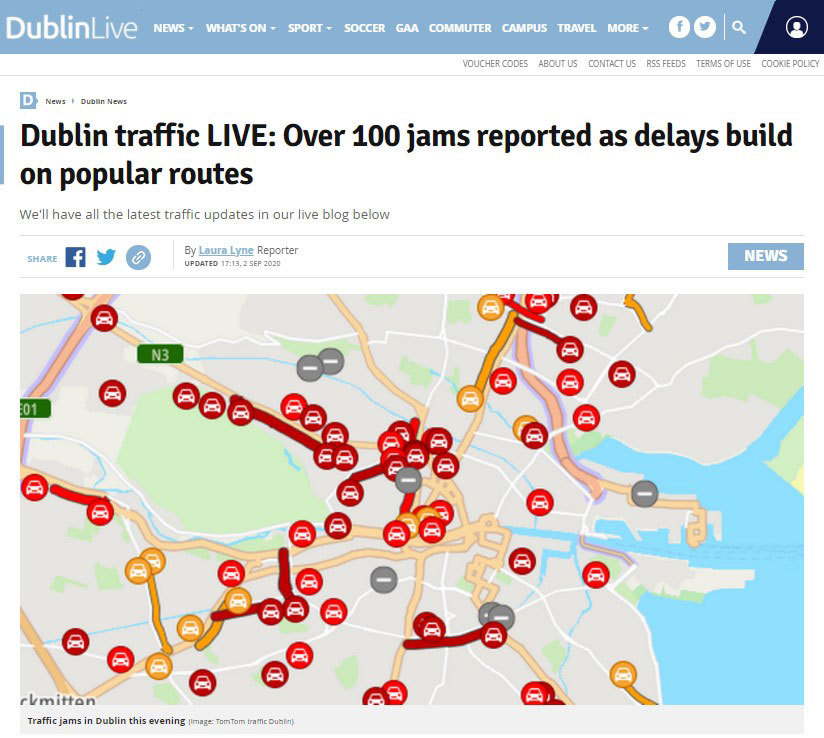 The Movement Out of Home

Google’s COVID-19 Community Mobility Reports shows how peoples’ movements have changed throughout the period of the pandemic. The dataset measures visitor numbers to specific categories of location every day and compares this change relative to baseline day before the outbreak.

This week we take a look at the change in time spent at home in Ireland. Peaking at more than 28% of pre pandemic levels at the start of April there has been a steady decrease as we’ve moved through the phases to just over +9% by the end of August. 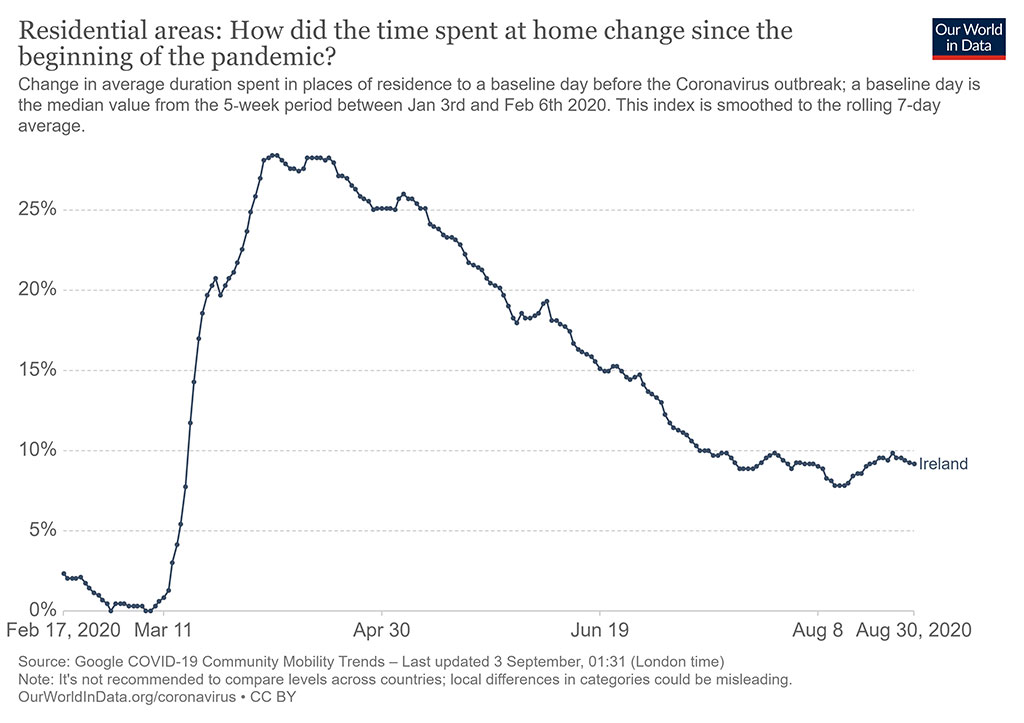 As part of our Now, Near, Next thought leadership series, we have continually carried out bespoke research to investigate the views and opinions of the Dublin population to help our clients gain insight into consumers, at a time when behaviours and habits have shifted so dramatically and at a pace we have not seen before.

In our latest wave of research, we investigated the future intentions of the Dublin population across a range of activities over the next 6 months.

It seems Dubliners are intent on living healthier lifestyles in the coming months as the research points to a higher likelihood of eating healthier and exercising more. 82% state they intend to eat healthier in the next 6 months, while over three quarters (80%) indicate they will be exercising more. Females aged 16-24 lead the pack in exercising, indexing at 120 vs all adults.

With people’s desire to engage in more exercise over the next 6 months, this presents a chance for advertisers to create awareness and affinity in local areas at different touchpoints as audiences begin to engage in this activity more frequently.

As we navigate through our vicinity and stay somewhat closer to home, OOH’s expansive network in local communities and suburban settings provides ample opportunity for advertisers to connect with audiences in local settings. Tailored, hyper local communications can also aid awareness and affinity by creating relatable messaging. 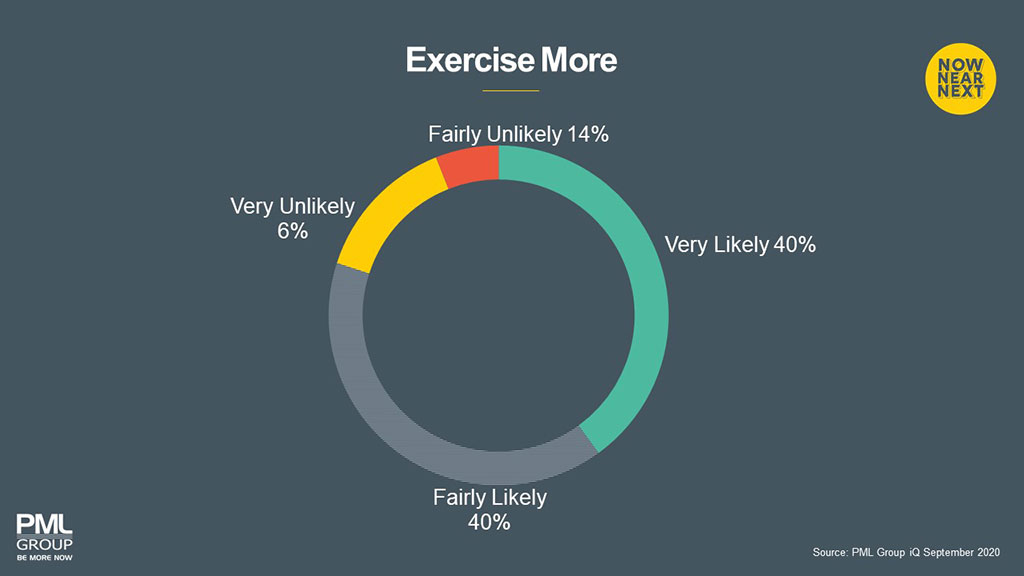 Impact of Billboards may be undervalued

Consumers in the UK find billboards the most attention-grabbing form of Out of Home advertising, according to new data from YouGov. One-tenth (11%) said large advertising sites at the side of the road or buildings have the biggest chance of catching their attention. The side of a bus also proves attractive to consumers, with 10% saying it would be the most attention grabbing.

Even with some elements of lockdown still in effect, and certain areas under stricter rules, the average Briton is still spending time outside the home. Approaching half (45%) of Britons say they have spent up to four hours each week travelling for various reasons (work, leisure etc) in the last 28 days.

Over a third (36%) have spent more than four hours travelling outside the home, with 15% spending up to 6 hours, and 8% travelling for up to 9 hours each week. 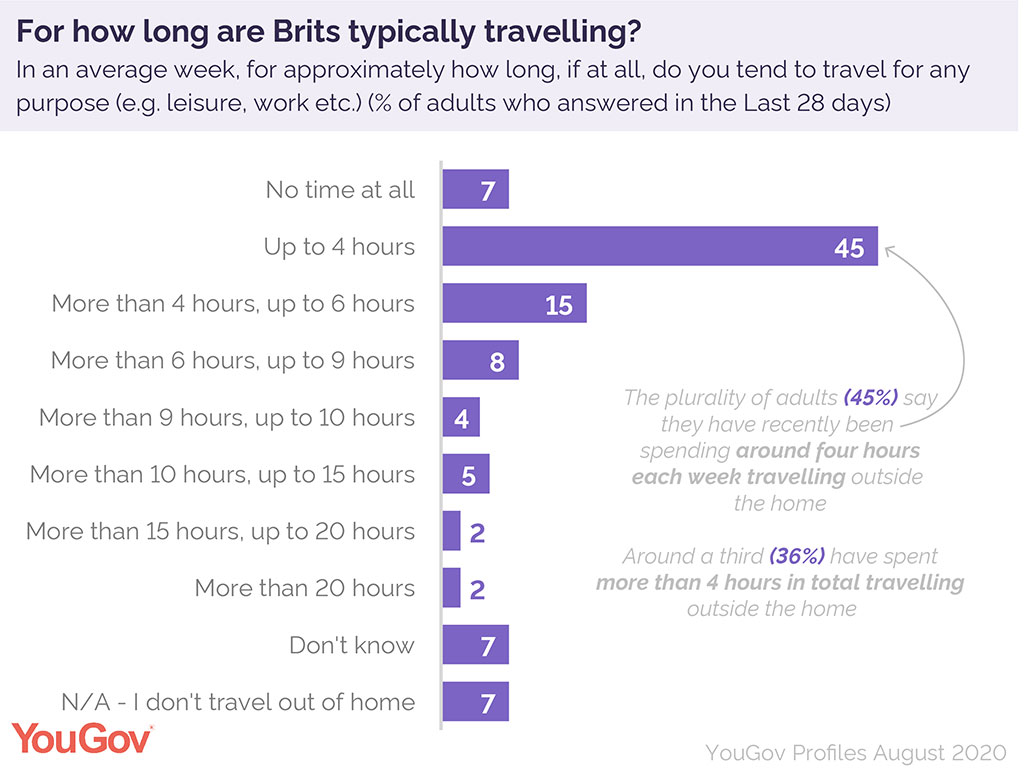 But which types of Out of Home (OOH) advertising are noticed most frequently?

YouGov Profiles reveals that adverts placed on the exterior of buses are noticed most frequently– with 48% of adults saying they see at least one of these types of ads a week. Only one in ten (10%) said they never see ads on buses.

Billboards come second, with 42% seeing at least one advertising billboard on a weekly basis. 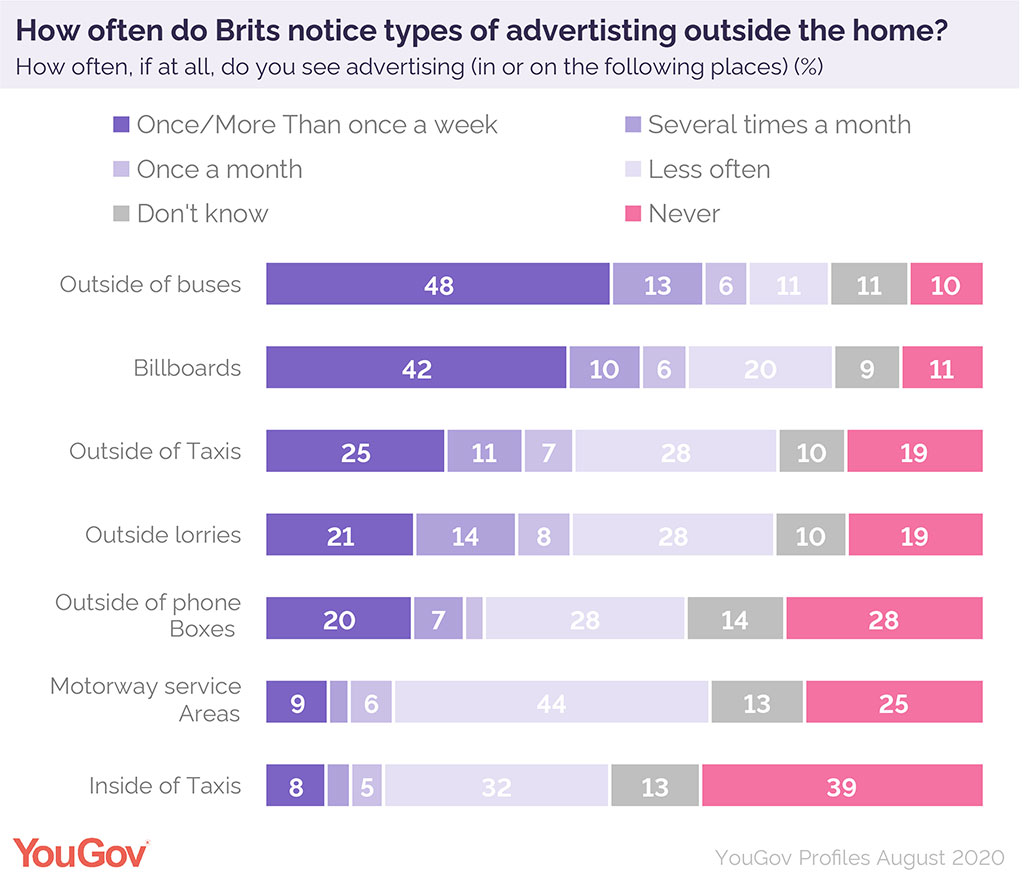 Figures from the CSO released this week points to a recovery in the retail sector, as the volume of retail sales increased by 6.4% in July when compared to the same period last year.

When excluding motor trade sales, the volume of retail sales increased by 2.8% in July 2020 over the previous month and increased by 5.9% when compared with July 2019.

Comparing sales to February before the crisis started, overall retail sales were 4.7% higher in July. The CSO reports that most sectors now have sales greater than they had in February.

Pent up demand seems to be still driving spend currently with the figures showing the largest monthly volume increase was seen in bars with sales jumping 138%. However, this compares to a relatively low base in June. Other sectors showing large monthly increases were Clothing (+25%), Electrical Goods (+12%) and Fuel (+10%).

As the volume of in-person shopping increased with the reopening, the proportion of online sales fell to 4.5% compared to an online share of 6.7% in June. 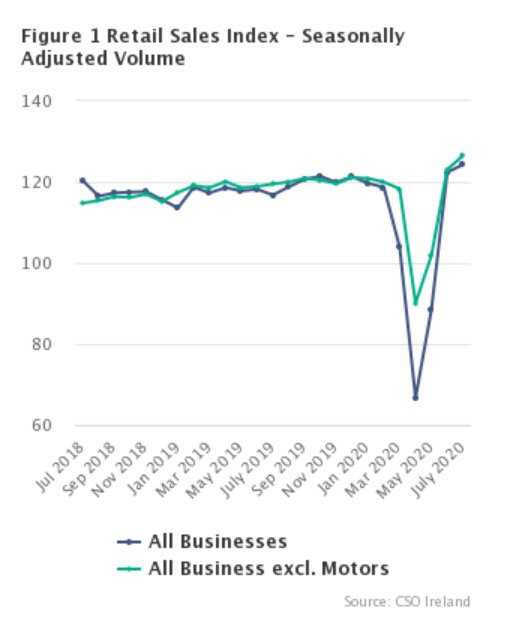 You only need to scroll through Instagram to know that staycations and weekend trips were a big feature of the Irish summer this year.

New Central Bank figures point to this staycation boom with spending on accommodation and transport jumping in July. The Central Bank’s analysis of credit and debit card spending revealed total card spending was €5.8 billion – up 6% on the previous month. When looking at the yearly comparison, spend was down only 5% in July. 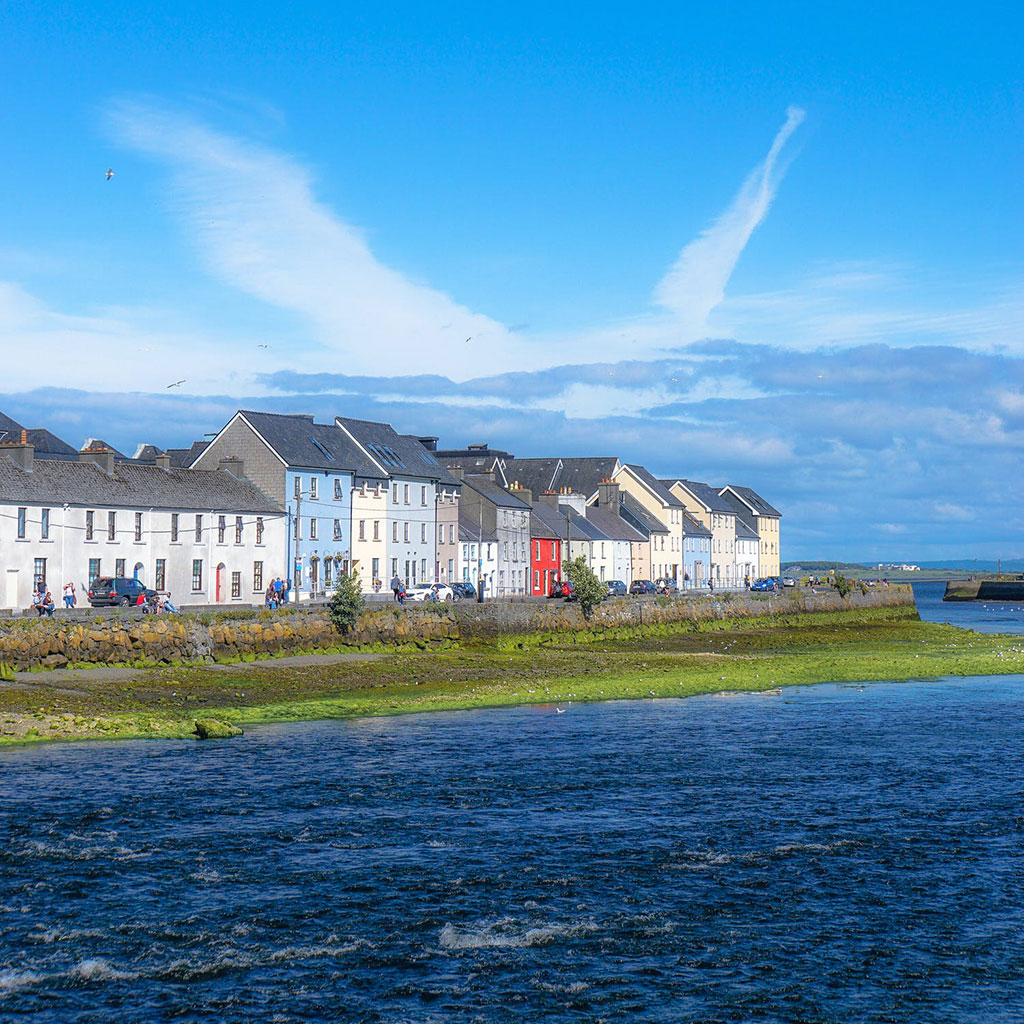 Accommodation recorded a monthly growth rate of 160% while the transport sector recorded a growth rate of 24%. The social sector increased by 35% compared to June, the restaurant category accounted for a large proportion of social spend and increased by 56%.  These increases coincided with phase 3 restrictions being eased at the end of June.

Spending on entertainment was also up in the month, recording an increase of 10 per cent compared to June.

A Central Bank spokesperson commented “Spending across sectors fluctuated greatly over the past number of months. It is evident that as the various phases of restrictions were eased, spending in all sectors has increased as the opportunities for consumers to spend has risen”.

As we move into the autumnal months, people will continue to go on staycations and short trips, however the audience and demographics of those travelling will shift from those in the summer months, with a move away from families to couples and groups of friends who aren’t restricted by the school term.

With retailers and banks offering customer incentives in terms of rewards such as hotel discounts etc., advertisers in these categories can take advantage of the staycation boom by communicating such initiatives and incentives to increase subscribers. With OOH, advertisers can transmit messages quickly to a wide diverse audience and drive appeal of such incentives. 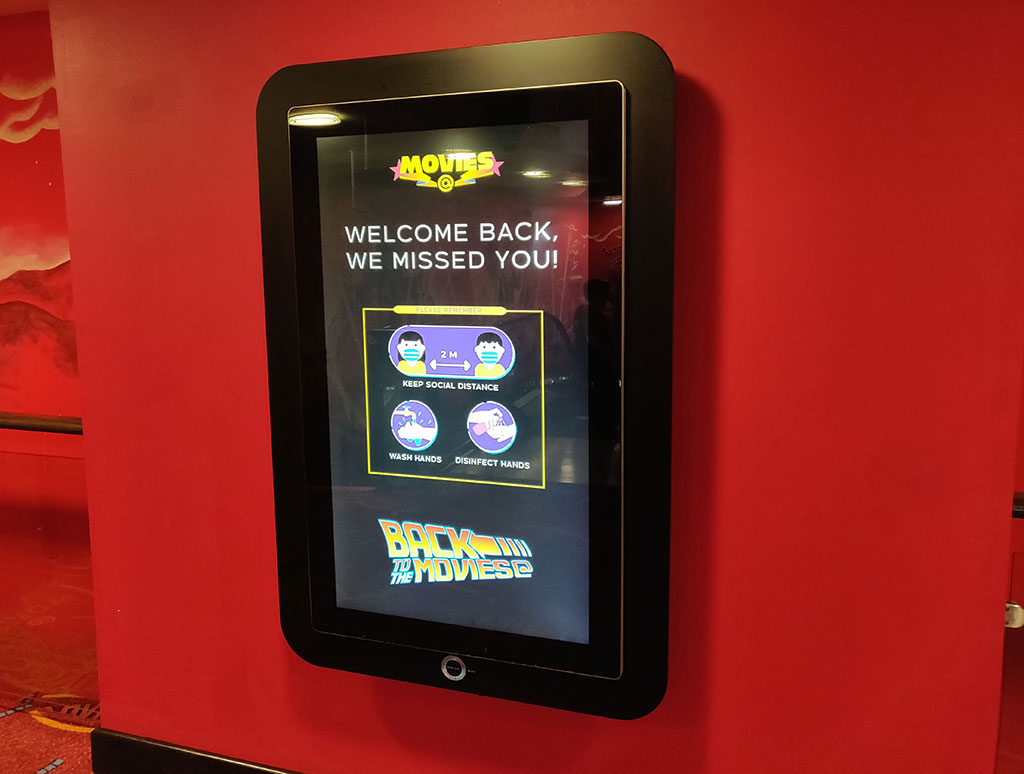 With cinemas back open and film releases beginning to hit the big screen again, cinema visits are back on the agenda for the Irish population.  This week, Wide Eye Media reported that the film Tenet took in more than half a million in Ireland during the first 5 days of its release.

As the first major film to hit the silver screen since releases halted, Tenet fared much better than expected as people craved a trip to the movies. As of Monday, Movies@cinemas reported all evening shows were sold out.

Wide Eye Media also reported that cinema admissions in Ireland for the week closing 27th August were extremely strong and grew 53% week on week.  As it now stands, 91% of cinemas are open.

With the cinema industry building momentum, this is a positive trend for the sector and OOH advertising. Film is a top OOH category that relies on the medium’s scale and awareness building abilities. OOH ensures mass coverage and can further build anticipation of movies due for release.

Engaging OOH campaigns with effective targeting and call to actions can aid purchase intent.  OOH formats placed in close proximity to cinemas, formats such as 6 Sheets and those on the path to purchase can help generate consideration and drive sales.

As we reach the six-month mark, the audience and marketeers are learning to ‘live alongside’ COVID-19. Examples are beginning to emerge of brands embracing the new opportunities that are presenting themselves.

Wrigley’s Australia are encouraging the public to “Freshen Up Behind The Mask” with one of their Eclipse Chewy Mints. It is a powerful, contextual OOH example of a brand creating a new usage occasion born out of the new government guidelines around the mandatory face coverings in public places. 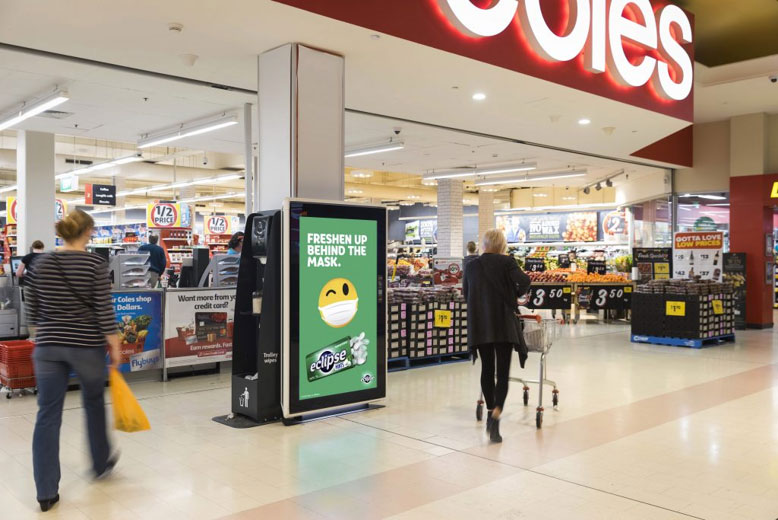 Specsavers have also seized the opportunity to promote their range of contact lenses in response to the ‘fogged up glasses’ issue that many of their spectacle wearing customers are newly experiencing.

Appropriate use of humour to promote sales is also re-emerging in respect to creative executions.

Starbucks Coffee are clearly highlighting that they are open and open safely for business. The copy plays on the difficulties that their baristas have in trying to decipher customers names as the speak through masks and protective perspex. Starbucks are famously known for personalising their customers’ drinks by writing their names on the side of the cup which makes this copy work so well.

Innocent Drinks in the UK are bravely going down the nostalgia route, using a humorous OOH campaign to remind the audience about life before COVID-19 and simultaneously rebuilding brand awareness for their Innocent smoothies. 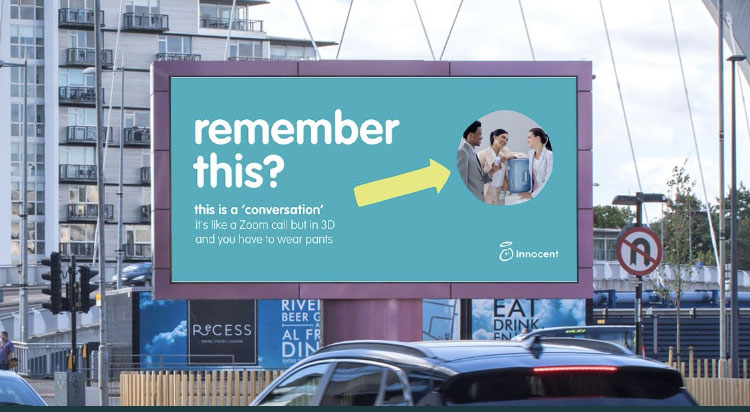 Even in these challenging times, opportunities exist for advertisers.  New audience routines and rituals can provide rich insights for brands to capitalise on.  OOH is uniquely placed to help brands land the new message at the right place at the right time!

Opinion: Time to Move On from the Great Culture Con