James Byrne, marketing manager, PML Group, with this week’s take from the world of Out of Home.

Summer Out, School In

It was a busy week for the country as children and parents alike begin to ready themselves for the start of the school year.

The return to school is a key period for many retailers and brands and this week we’ve seen a wide range of advertisers taking to OOH to focus on the return.

Dunnes Stores has back to school sorted as it promotes the essentials in its OOH campaign. DBS is helping prospective college goers visualise their future success ahead of the Leaving Cert and CAO results being released in the coming weeks, while Nestlé is advertising its whole grain range of cereals in the retail environment, reaching shoppers as they prepare for the start of the school year.

As school goers begin to make their way to class, movements among this cross section of audiences will only increase as the drop off and pick up resumes.

In this week’s Now, Near, Next we continue to report on our usual mix of news and data along with our own bespoke research on how data driven dynamic campaigns can boost consumers perceptions of brands. 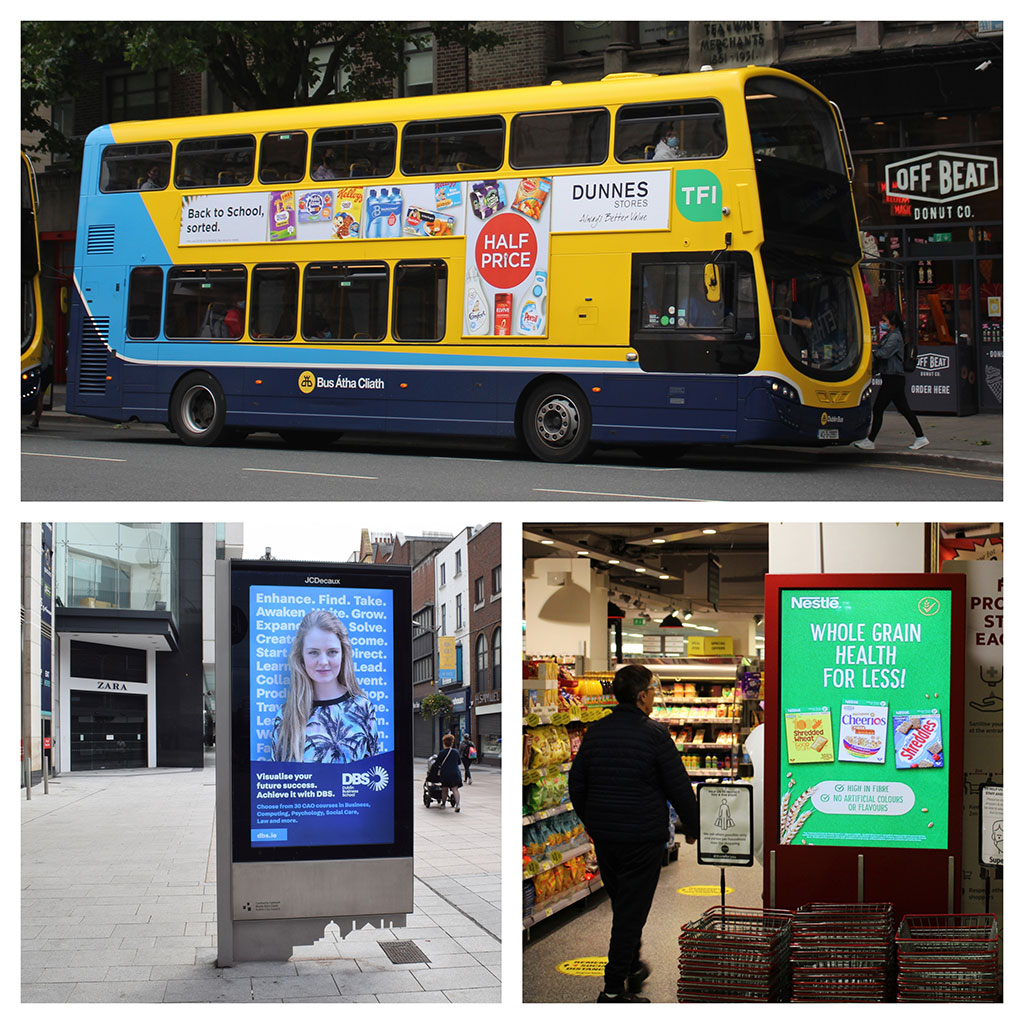 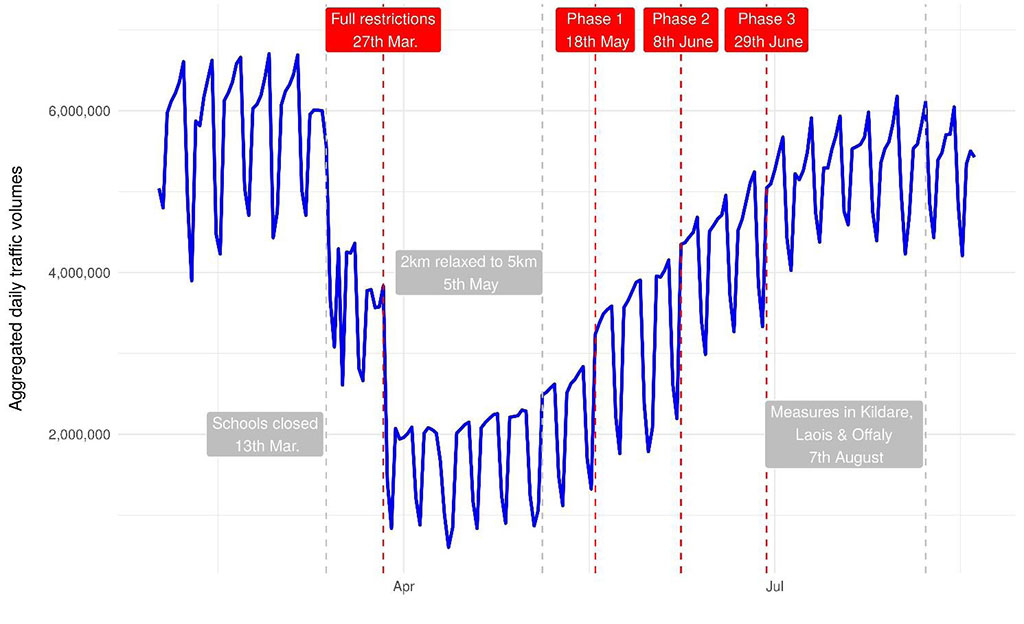 The plot demonstrates the scale of the reduction. Traffic volumes, since the restrictions imposed on March 27th, initially reduced by 60-70%. Volumes have recovered to represent an aggregate reduction of approximately 10-20% from typical conditions in 2019. 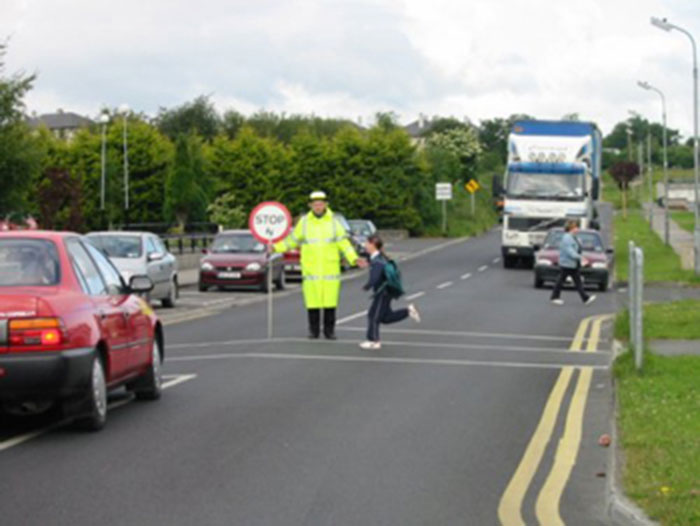 Early indications from the TomTom Traffic Index are that the schools reopening has increased congestion in our cities with congestion levels in Dublin and Belfast on Wednesday up by 21% and 17% respectively on the previous week. The 35% congestion level in Dublin means that a 30-minute trip will take 35% more time than it would during uncongested conditions. The latest figure in Belfast is 27%. The return of schools is also expected to see an increase in traffic around peak morning and evening times.

The Summer of the Staycation

This year saw unprecedented levels of domestic tourism as Irish holiday makers explored all that their own country has to offer. The boom in visitors is reflected in Apple’s routing requests mobility data for Kerry which shows a huge spike peaking during the first two weeks of August as car goers made their way around the kingdom. 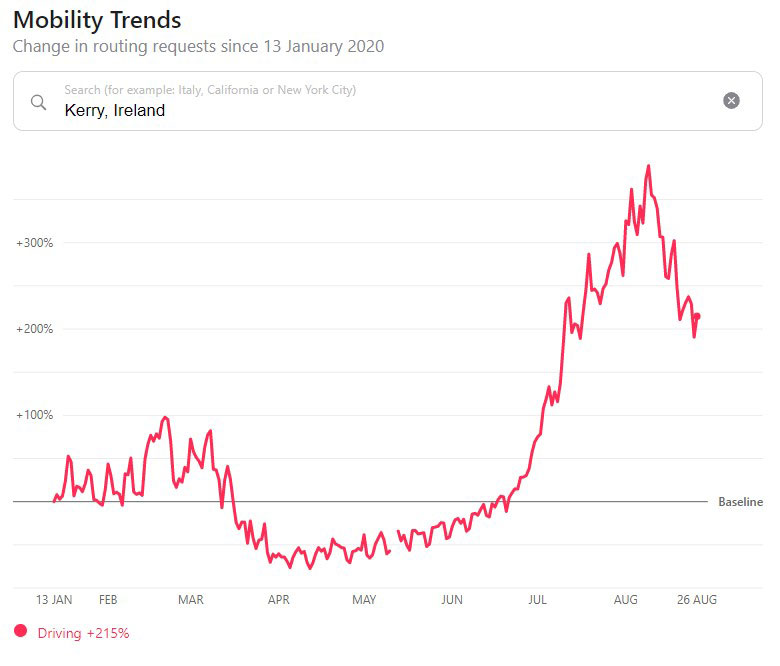 A new global study published by digital bank N26, which includes a nationally representative sample of 1,005 Irish consumers, has found that seven out of 10 of Irish consumers were considering or have already taken a staycation and almost a third said this was the first time they had been on this type of holiday. The research also shows that “somewhere rural” is the favourite destination for a staycation (29%) in Ireland, with the beach (25%) and Munster (22%) close runners-up. 19% of the Irish consider going to the mountains as their top destination. A third of those who have gone on staycations before are driving there this year rather than getting public transport (32%).

Irish Grocery Edges Back to Normality

In the latest round of Kantar reporting, SuperValu continues to hold the highest grocery retail market share at 22.3%.

Contributing an additional €624,000 to its growth, SuperValu was the only supermarket to gain new shoppers during the 12-week period to 9 August.

Higher average prices and bigger baskets were attributed to Tesco’s market share of 21.1%.

A similar picture was witnessed at Dunnes Stores.  The retailer recorded the highest average spend per trip, while also experiencing an increase in volumes and higher average prices to hold 20.5% of market share.

Lidl achieved the highest growth rate of all retailers in the 12-week period, achieving it highest ever market share of 12.8%, coinciding with the hugely successful launch of its Lidl plus app. 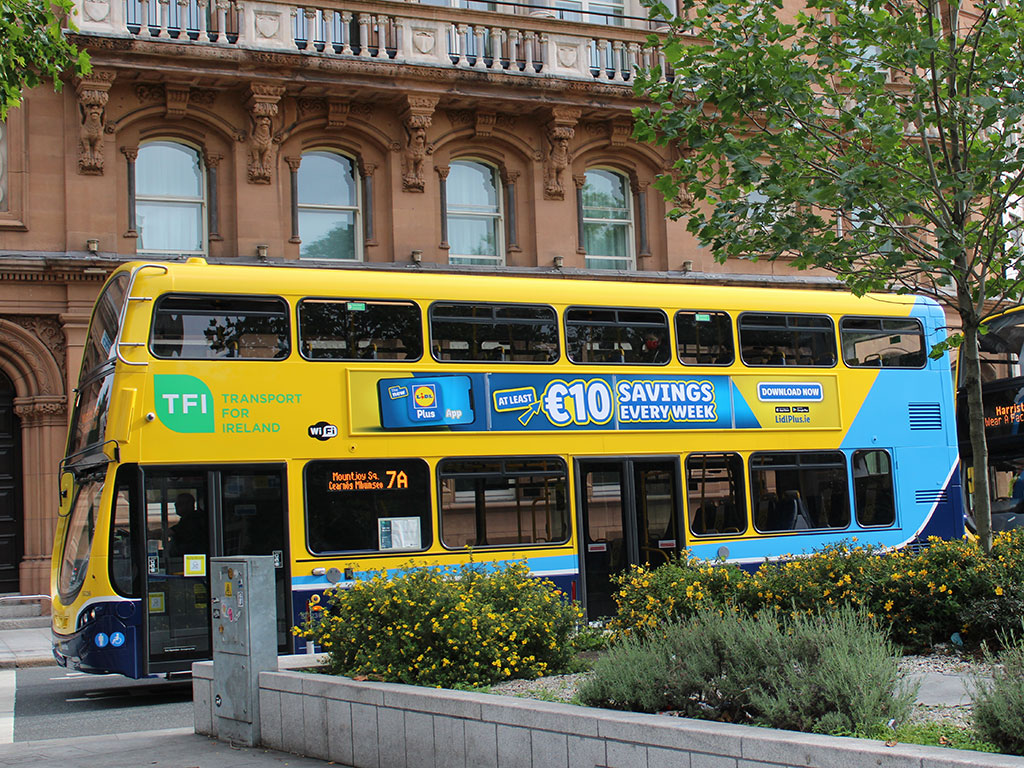 Overall take-home grocery sales slowed to 18% year on year. Grocery spend of €930 million over the last four weeks was the lowest since February. However, it is still significantly higher than pre-pandemic levels.

The relaxation of restrictions means shoppers are now less inclined to favour large, infrequent shops something that was a trend during the height of the pandemic, suggesting a return to more normal shopping patterns. People are spending approx. €5 less per trip compared to April.

Kantar also reports on how branded sales have soared in Aldi and Lidl. Branded goods sales outpaced private label to grow by 23%. Kantar attributes this to consumers still choosing to treat themselves with luxuries.

Looking at specific product categories, Kantar reveals how the gloomy weather and the government’s drive to holiday in Ireland with its Stay & Spend tax incentive, aided the sales of certain products. Firelighters and logs sales grew 77% over recent weeks as people enjoyed barbecues and campfires. Hotel breakfasts were swapped for homemade alternatives and eggs, bacon and sausages all grew ahead of the market.

The retail environment still remains an important outlet for customers. OOH is well placed to interrupt shoppers at pivotal points along the path to purchase journey. With branded goods sales outpacing private labels, brands have an opportunity to drive consideration and conversion by creating engaging and disruptive messaging in the retail environment.

As part of this Now, Near, Next thought leadership series, we have investigated the opinion among the Dublin population in relation to advertisers use of data driven dynamic content in DOOH campaigns.

Looking to gage people’s perceptions on such advertising methods, we commissioned Ipsos MRBI to survey 300 16-54-year-old Dubliners to quantify their views on dynamic content. Some topline salient points are published below.

Positive sentiment was recorded across all statements, with nearly half of all respondents (48%) agreeing that the use of dynamic advertising methods would make them notice this type of ad more.

Utilising contextually relevant information in DOOH campaigns seems to give brands a competitive advantage.  43% of the Dublin panel agree that incorporating dynamic content into campaigns gives brands an edge over their competitors. Females aged 25-34 years old were most likely to agree with this statement at 52%.

A further 43% of respondents state that adding dynamic content to campaigns makes them think that brands are more modern and innovative. 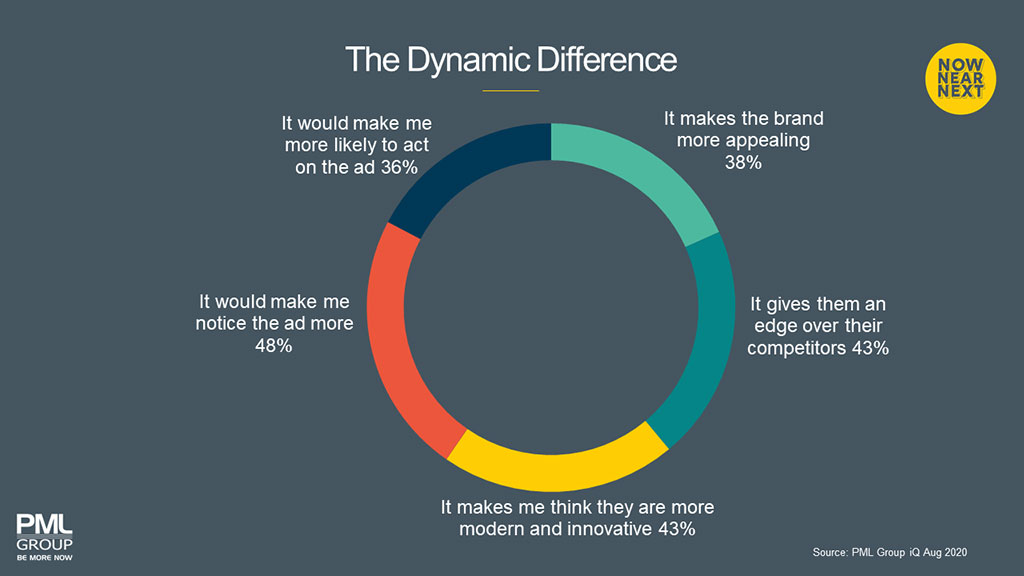 In an increasingly fragmented media landscape, OOH is the purest broadcast medium that can literally stop people in their tracks. With high definition digital screens in a variety of environments and the ability to deliver data driven dynamic content via our Liveposter platform, brands can be even more creative in their DOOH campaigns to increase relevance to consumers.

Using the power of dynamic content to speak to consumer directly can significantly bolster business effects for advertisers with audiences willing to act on relevant and relatable DOOH campaigns. 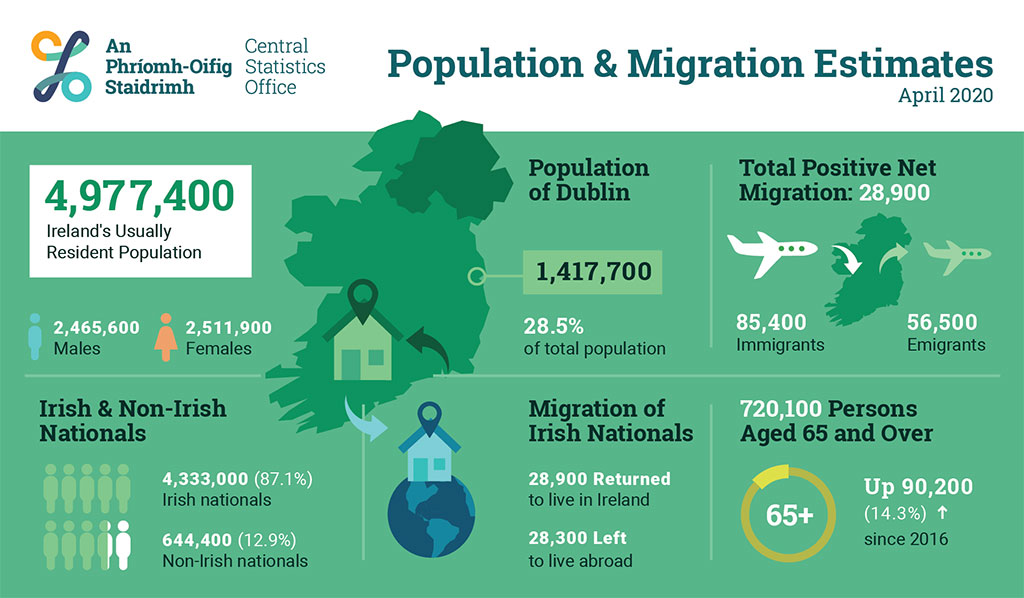 Ireland’s population increased by 55,900 or just over one per cent in the year to April and now stands at 4.98 million, estimates from the CSO reveal.

The combined effect of positive net migration and natural increase contribute to the rise in people living in the state.

Comparing birth and death rates, a natural increase of 27,100 was added to the population.

Gender breakdown shows a pretty even spilt with slightly more females than males (2.5 million V 2.4 million). 40-44s was the largest age group when looking at the male population, while the 35-39 age group was the largest in the female demographic.

The population of Dublin in April 2020 was estimated to be almost 1.42 million persons, which accounts for 28.5% of the total population. The mid-east, which consist of the commuter belt counties was the most populated after Dublin with 733,500 living in the region. The south-west, with counties such as Cork in the region, is the third most populated with 716,700 living there.

As an OOH agency specialising in location and audience-based marketing, these CSO figures offer us a rich source of data to inform strategy. The insights garnered from the CSO along with our own in-house planning tools such as OCS, Locomizer and Pinpoint enable our planners to build campaigns that connect the correct audiences and locations with brands.

In its State of Play report just published Core Sponsorship state that being so cluttered, the sporting calendar for the second half of year is unlike any other. Here are their latest event timelines. 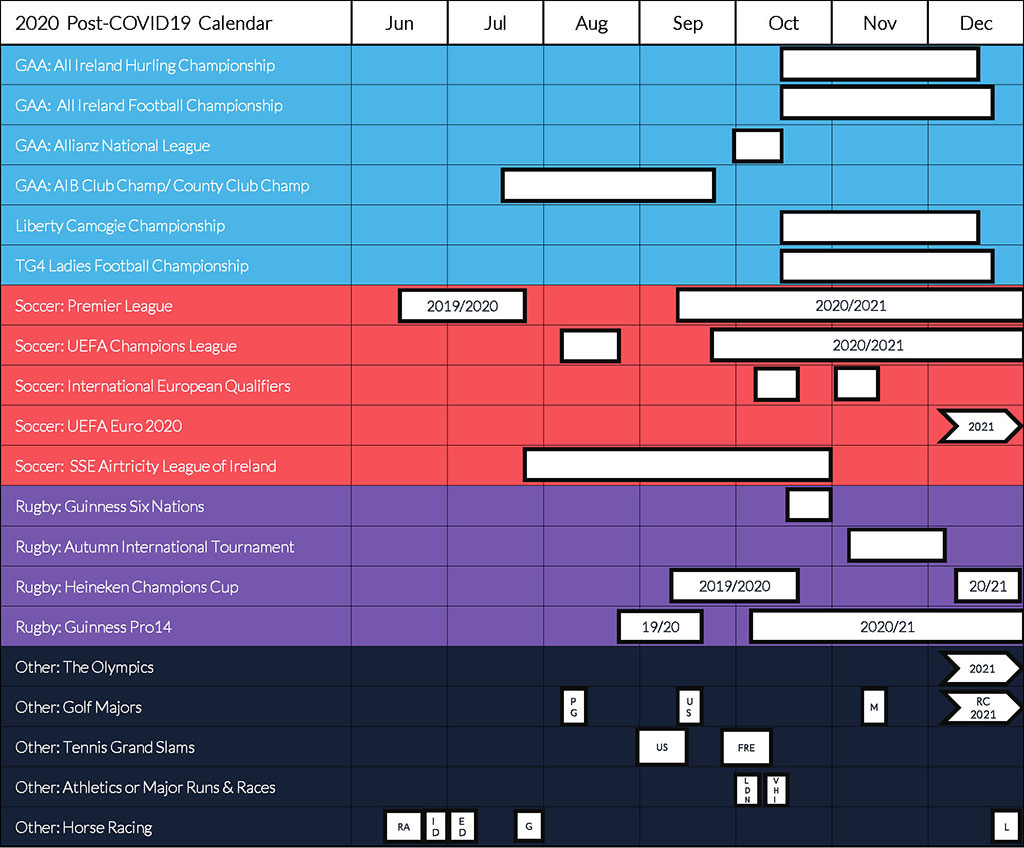 There’s ample opportunity for brands to use OOH to leverage their sponsorship / association with the abundance of sport that lies ahead. It’s going to be a very cluttered environment and clever OOH can cut through the noise via classic and digital solutions. Live dynamic data content triggered though Liveposter can connect with fans at a local level and deliver in terms of brand association and perception.

Wide Eye Media report that during this past weekend alone, admissions for cinemas in the Republic of Ireland grew by 40% (Friday 21st – Sunday 23rd August vs Friday 14th – Sunday 16th). Inception topped the box office for the full week, followed by newly released Pinocchio and 100% Wolf. 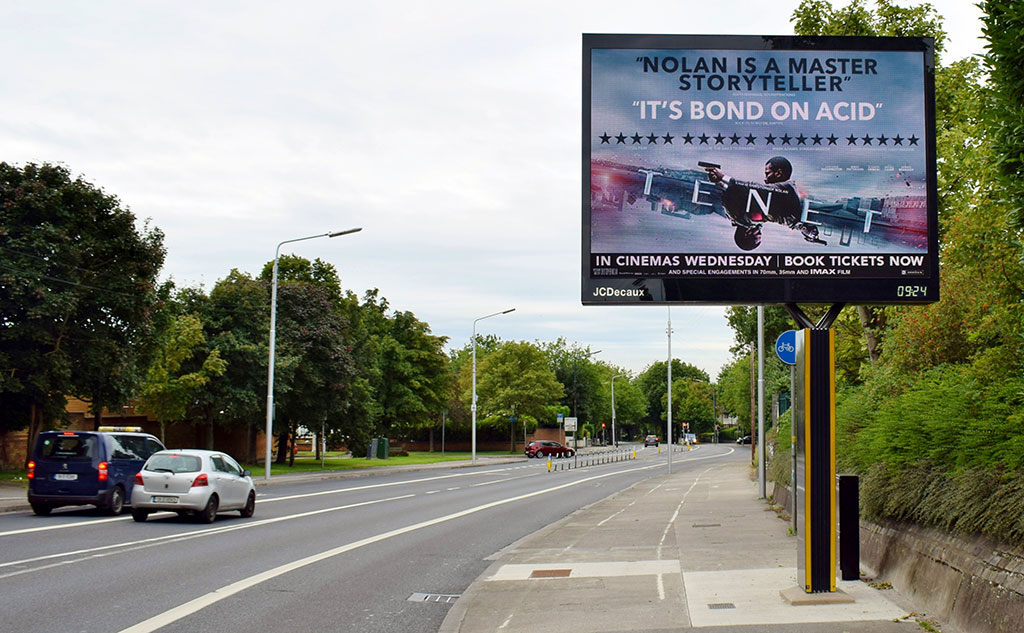 Cinemas are showing just how scalable they can be, even when adhering to 2m social distancing around bookings and family bubbles. While keeping each auditorium at reduced capacity, increased potential to see movie favourites has been developed thanks to increased showtimes across the day and multiple screen usage.

KFC has paused use of its classic Finger Lickin’ Good slogan after 64 years as it decides the message “doesn’t quite fit” following the coronavirus outbreak. The chain is running an international OOH campaign with the well-known slogan blurred and pixelated. 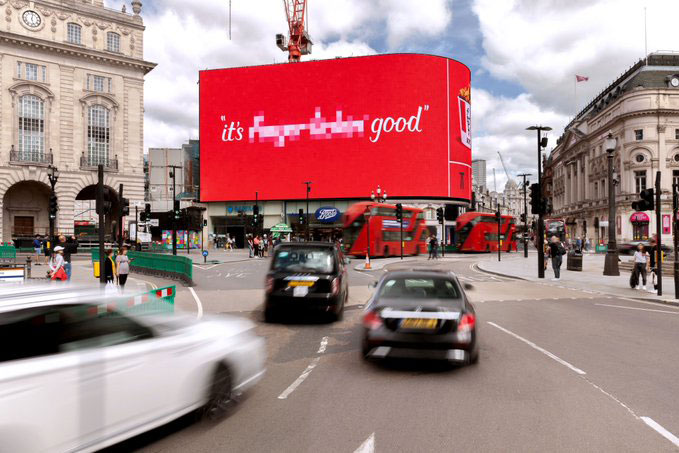