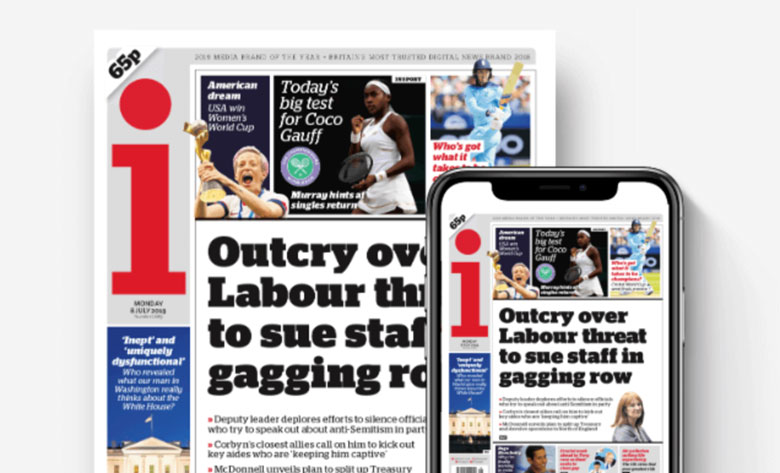 DMG Media Ireland is to distribute the i newspaper on the Irish market from this weekend onwards.
The daily newspaper was acquired last November from JPI Media Limited for £49.6m by DMG Media the consumer media business owned by DMGT.
Already a popular title in the UK  and known for its fresh and exciting perspective on UK and World News, Business, Opinion, Lifestyle, Culture and Sport, the i Newspaper will publish six days per week at a weekday RRP of €2 and €2.50 on Saturdays.
In the UK, the i Newspaper carries a loyal and engaged readership built on high quality, concise and impartial journalism.
The i Newspaper joins the DMG Media Ireland portfolio of the Irish Daily Mail and The Irish Mail on Sunday, MailOnline, Extra.ie, EVOKE and RollerCoaster.ie.
Speaking of the new addition to the DMG media group, CEO Paul Henderson said, “The i Newspaper is an exciting read in its own right. In this market, it is an independent observation into our nearest neighbour and critical trading partner. With six months to Brexit, this daily insight will become increasingly important to the business and consumer market in Ireland.”
Originally launched in 2010 as a sister paper to The Independent, the paper was later acquired by Johnston Press in 2016 after The Independent shifted to a digital-only model Ownership of the paper then transferred to JPI Media after Johnston Press went into administration in the UK in 2018. The paper and its website were then bought by DMGT in November 2019.