Guinness together with the Vintners Federation of Ireland and a group of Kerry publicans, announced details of a pilot initiative, ‘Social Spin,’ providing a safe and sociable option to get to and from the pub.

Having noticed a steady decline in people coming through their doors, publicans in Causeway North Kerry and Faha, South Kerry, came together to address isolation in the community by creating a unique transport solution involving the whole community.

Speaking about Social Spin, Sean O’Mahony, owner and publican at Faha Court Pub said” Socialising is the fabric that knits our community in Faha together, and fewer people meeting up in a social setting began to impact the atmosphere in the area. We knew something had to be done, so we bought a community car, set up a dedicated mobile number and asked people to volunteer to drive their friends and neighbours to and from the pub.”

Every day from 5pm to closing time, over 70 volunteer drivers throughout Causeway and Faha have signed up to get behind the wheel, opting to drive to the pub and back home in place of drinking. Anyone over 25 years of age and licensed to drive can sign up and volunteer to drive the Social Spin car.

To provide awareness of this community initiative, Roscommon born, Hollywood actor Chris O’Dowd got behind the wheel and drove some of the local community to the pub in Faha to show his support for the initiative. 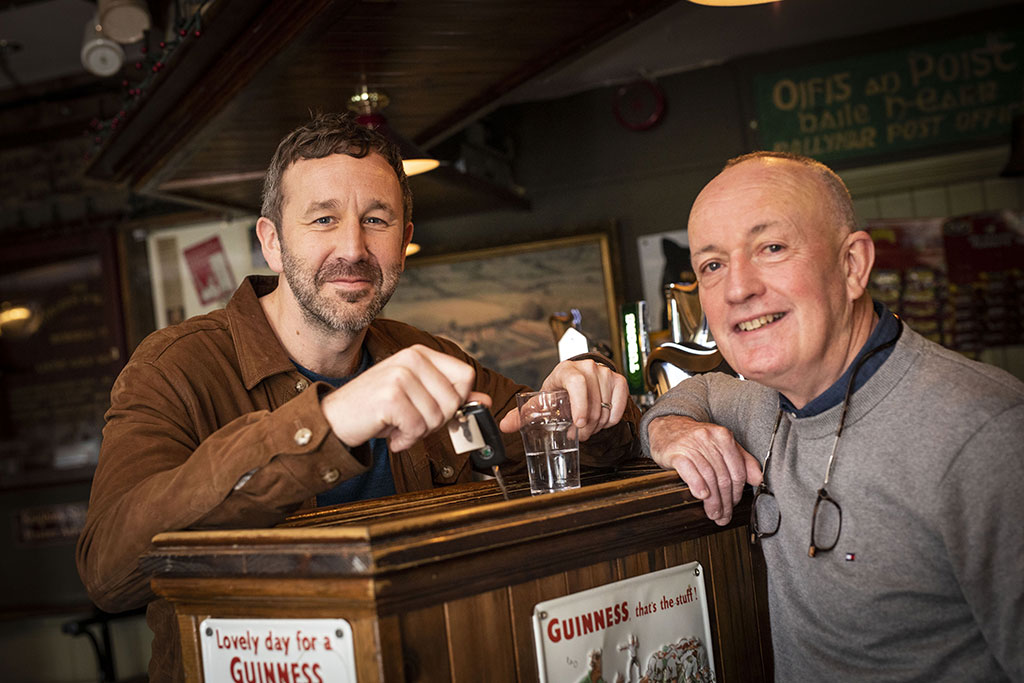 Speaking about Social Spin, Chris O’Dowd said “Having grown up in Boyle, a rural area in Roscommon, I understand the significance of the local pub in bringing people together in a community – it’s a social hub, somewhere to catch up and share stories. Socialising is part of our DNA and I think Social Spin is a brilliant and simple way of nurturing and celebrating this sociability, which is such an important part of our culture”.

Pub-goers can either call or text the dedicated ‘Social Spin’ number when they want to head down to the pub to meet people. There is no charge for the use of the service, but users have the opportunity, if they so wish, to give a maximum voluntary contribution of €5 on any given evening.

Publican Sean O’Mahony continued “Since introducing ‘Social Spin’ the atmosphere in the area has changed for the better. On average we drive between 80 and 100 people to and from the pub on a weekly basis and as a result it has contributed to a renewed sense of community spirit. We are thrilled with how it is being received”.

Alan McAleenan, Guinness Marketing Director said; “We are delighted to support such a fantastic community initiative. Social Spin is a progressive and positive solution that addresses rural isolation and also brings communities together in the pub in a safe and positive way.”

Also speaking about the initiative, Padraig Cribben, VFI CEO said: “Lack of rural transport inhibits sociability in villages and towns where there are little or no options to get to or from the pub to meet up with friends or family.”

Mr. Cribben continued; “Social Spin is a fantastic initiative run by local communities that promotes and nurtures sociability within Causeway and Faha, which we believe will inspire other communities across Ireland to consider introducing a similar scheme. Once this pilot is complete, we will bring a strong message to government that funding needs to be made available to support Social Spin across rural Ireland.”

All seven publicans who have introduced ‘Social Spin’ into their communities across Causeway and Faha have seen a positive impact with notable increase in sociability, a more connected community spirit and a renewed sense of vibrancy in the area.