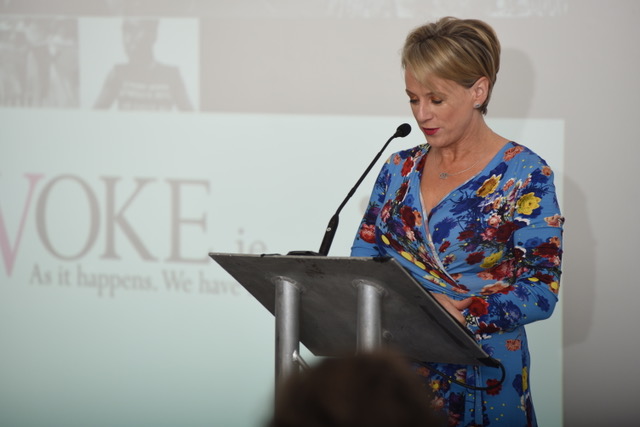 IAPI, in association with EVOKE.ie, celebrated International Women’s Day today at a special event in the RHA Gallery as a packed audience made up of leaders from the advertising and creative communications sector heard a number of keynote speakers talk about leadership, gender equality and diversity in the industry.

Sybil Mulcahy editor of Evoke.ie and former TV3 presenter MC’d the event and introduced Paul Henderson, CEO of DMG Media and creator of Evoke.ie. Henderson has supported IAPI’s International Women’s Day celebrations for the past five years and is a strong advocate of diversity and gender balance for the industry.

The keynote speaker, Natasha Broomfield Reid,  was the Winner of Stonewall Cymru’s LGBT+ ‘Ally of the Year’ 2018 Award.  She achieved a special mention in the UK National Centre for Diversity’s 2016 ‘Inspirational Person Award’. Natasha has over 20 years’ experience working in diversity & inclusion and has carried out roles including the Head of Diversity and Inclusion for Charity Victim Support and Head of Development for Equal Approach – A Global Diversity and Inclusion Consultancy.

Before she started her workshop, she introduced a short video, “Out of the Mouths of Babes” which was commissioned by IAPI and featured children from Griffeen Valley Educate Together School, Lucan. The video presented their unfiltered views on equality, diversity, balance and inclusion and juxtaposed their ideas with the perceived status quo of the modern work environment.

Natasha then brought participants through a interactive workshop questioning the skills needed for business success and interrogating whether these skills are predominantly perceived as male or female.

Too often, leaders may choose male leadership traits; when in fact, female leadership traits are proving more often that they are the traits that can get best results, she noted. Traits such as creativity, collaboration, trustworthiness and humility can lead to greater business success and bring balance to the team, she added.

She also pointed out that a lack of diversity in creative industries will limit organisation’s growth and success. Her recommendations included flexible working arrangements for ALL staff, actively minimising the gender pay gap and using staff focus groups to ensure retention of staff.

She was followed by Caroline Tyler, Country Director of the Irish Centre for Diversity. Tyler has over ten years’ experience working to drive Diversity and Inclusion.  She worked for eight years with the team at the UK National Centre for Diversity, following on from their success she launched The Irish Centre of Diversity two years ago. Its goal is to positively influence beliefs, attitudes, behaviour and conduct towards issues surrounding equality, diversity and inclusion within organisations and society.

The morning was closed by Charlotte Barker, IAPI Board Member and Chair of the Diversity Council. Deputy Managing Director at Dynamo, she was also the winner of the 2017 IAPI Doyenne Award for Leadership Excellence. Barker also announced the launch of a new IAPI initiative, the IAPI Inclusion Network which will roll out a continuous diversity & inclusion programme supporting IAPI members.

According to Charley Stoney, CEO of IAPI: “I often reflect that we here in Ireland are very fortunate as we only have to contend with our own internal barriers; we do not have to battle discriminatory laws or legislation as others around the world in less fortunate circumstances do.  We must ensure that we do not fall victim to our own stereotypes or gender biases.”