Dublin airport’s advertising product evolution has gathered pace recently with the introduction of new formats and properties designed to tap into an audience that is particularly receptive to commercial messaging.

As the Irish tourism industry continues to thrive, the number of people passing through Dublin Airport continues to increase. In fact August was the 53rd consecutive month of growth in passenger numbers with more than 3.2m journeys made, boosted by the introduction of 14 new routes over the summer period and extra capacity on more than 50 existing services.

Total passenger numbers are up 6% for the first eight months of 2018 at more than 21.2 million, but it is not just the numbers that make this an attractive location for advertisers.

Research conducted by Red C during March and April of this year found that 47% of respondents said they engaged more with advertising at Dublin Airport than most other platforms, including social media, newspapers and other outdoor advertising.

The response was particularly positive from 15-24 year olds, who expressed a desire to see more interactive/innovative advertising.

More than 80% of Irish passengers surveyed said they were in a ‘happy’ mood, making them 30% happier than the average Irish person based on comparisons with the Red C WIN End Year Study. Just over three quarters (76%) described themselves as being ‘relaxed’ – a state of mind that is generally conducive to the receipt of advertising. 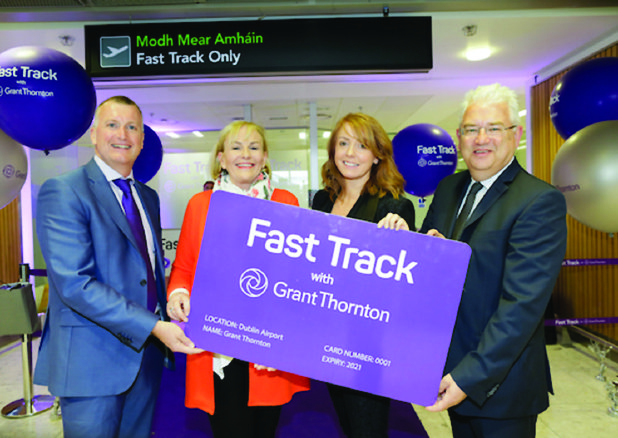 The research also revealed that more than four in five visitors to Dublin Airport feel that the brands advertised are trustworthy and appropriate to the airport and its passengers and a similar percentage said advertisers at the airport tried to understand their needs.

Dublin Airport first launched digital advertising screens in 2015 and Ronan O‘Donoghue, head of advertising & commercial partnerships at DAA explains that there are plans to expand the existing digital network. This will involve investing in a number of large LED digital formats, providing advertisers with additional opportunities to engage with the millions of passengers who go through the airport each year.

Grainne Morrison, head of business development for Dublin Airport has described The Future Factory as a new innovation and business development function, seeking insight and highlighting commercial opportunities for the airport and its partners. The aim is to generate new business and revenue through leveraging those things it does really well (such as car parks) and look to see if these capabilities can be expanded on and sold onto new markets.

According to O’Donoghue, OOH in general is enjoying a strong second half in 2018 and Dublin Airport in reaping some of the benefits of this uplift. “Aside from increasing demand in the DOOH space, we are seeing demand remain strong for premium statement sites such as the ‘Skybridge’ in T1 and the Blue Lifts in T2,” he says. “Sites like these let brands make a statement; they provide prominence in a premium environment.”

A Rise in Footfall

Volumes have risen over the last 12 months and O’Donoghue refers to a significant change in the variety of new clients and categories enquiring about airport advertising opportunities. Particular growth has come from the financial and professional services sectors.

“In 2018 we also saw Facebook advertise with us for the first time,” he adds. “It was great to see such a global megabrand utilise our unique environment for real advertising effectiveness,” he adds.

O’Donoghue says there have been a number of OOH campaigns that have caught his attention over the last 12 months. “I love what Aer Lingus did with its ‘#happywinter’ video booth in St Stephen’s Green and really liked what Cadbury’s did recently with the ‘beat the lull’ Boost campaign, but the one that really stands out for me has to be the current ‘Irish Mythological Legends’ campaign Skoda is running in Dublin Airport.”

He says that a campaign has rarely captured the imagination and attention of an airport audience in this way. “People are still captivated by it. It is not just excellent OOH advertising; it is excellent advertising full stop.”

Discussions of this medium often turn to the key elements of an out of home advertising campaign, but O’Donoghue says the basic rules still apply.

“Succinct messaging, appreciation of the physical environment and arresting visuals – you get that mix right and you can’t go too far wrong.”

The ‘Next Big Thing’?

As for the ‘next big thing’, he references developments such as the ever-improving technology around facial recognition and says the implications that will have on hyper-targeting for the industry will be really interesting. Not to mention the possibility of Google getting into the OOH business, which is something that could really shake things up.

However, it is the continued rollout of large digital formats that will be the most significant trend in 2019, he continues. “Not only is their physical size appealing, but also how we can overlay real world data to connect with consumers on a more tangible level. British Airways’ ‘Look Up’ campaign is still one of the best examples of this in action,” he says.

O’Donoghue says Dublin Airport is fortunate in that it is not restricted in the same way as other locations when it comes to digital animation, allowing clients to use their existing online or AV copy in its original form. “We see this as a distinct advantage for brands advertising here and this will become even more apparent with our planned extension of large digital formats to our existing AerPod network.”

He adds that innovation is critical if the industry is going to evolve, stay relevant and be deemed necessary by clients. “If we don’t innovate, someone else will (take the example of Google going into OOH as an example). While areas like programmatic and facial recognition are important, we see innovation coming in other forms also. Take our recent deal with Grant Thornton, whereby we identified an existing property (Fast Track) and found a way to create a sponsorship package that not only worked for us and the sponsor, but also helped improve the customer experience.”

On the back of this success, Dublin Airport has created several other new sponsorship opportunities with products such as Wi-Fi and even its VIP private terminal Platinum Services.

O’Donoghue describes the prospects for the OOH market in Ireland over the next 12 months as highly promising. “If the industry gets the right level of investment into digital infrastructure, then I believe more budgets will shift into the medium. We are very optimistic about 2019 – we have big plans for digital and with our ongoing innovation in the sponsorship space we have more ways than ever for brands to connect,” he concludes.