As part of its OOH media planning, AIB has unveiled a customised billboard that uses the full width of a 240 sheet billboard located in Ranelagh, making it the largest special-build ever produced in the Irish market.

The  240-Sheet special is an iteration of the AIB ‘Belief is Everywhere’ TVC and consists of a 2D landscape with iconic structures and various houses standing out from the billboard. With 1,000 LED lights included and over 2km of electrical cable, a series of cut outs and windows span across the 82 sqm canvass that lights up sequentially.

AIB launched its ‘Belief is Everywhere’ campaign in October 2018 with a TVC, created by Rothco,  that shows selected windows in homes across Ireland light up to the sound of a melodic music-box, “bringing to life and recognising the hard work and belief that Irish people demonstrate in the house purchase process.”

The campaign is currently running across OOH, TV, Cinema, Social and Search this month. 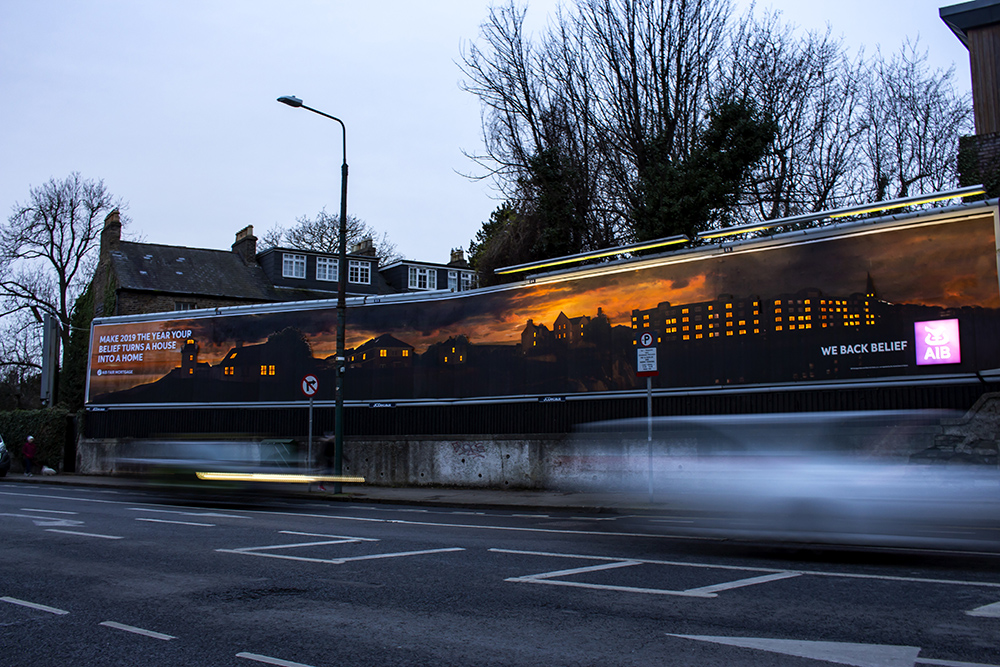 Starcom and Source out of home Ireland are responsible for the placement of the OOH campaign with creative produced by Rothco and the special build supplied by Eclipse 3d. The 240 Sheet is maintained by media owner, JCDecaux.

According to Mark Brennan, head of marketing at AIB: “The OOH special is an amazing way to reinforce our Backing Belief creative platform for AIB Homes and bring to life our new campaign in such a creative and impactful way.  All credit to the extensive team involved in producing the largest OOH special ever seen in Ireland and we’re delighted to be the first brand behind such a spectacular build.”

Manuel Yoacham, Business Director in Starcom, part of Core, adds: “OOH is such a powerful platform, which we recognize as a key channel for AIB Group. Achieving cut through in a competitive market like mortgages is key, and we identified a special build for awe and impact and the finished product is fantastic.”

‘’We’re delighted to be involved in the execution of this expansive and impactful illumination special for AIB.  A great complement to the TVC, OOH allows the campaign to extend beyond the screen and brings it to life in the real world, engaging passers- by travelling on the high footfall, high traffic street as well as earning considerable traction and top-of-mind awareness., adds Orlagh Keane, senior account manager, Source out of home.