Heineken has topped the rankings in the inaugural Ireland Sponsorship Reptrak 2018 survey which was published today by The Reputations Agency.

Based on the perceptions of 7,094 members of the public who completed the survey between January and March 2018, the survey measures the consumer perceptions of the sponsorship activities and whether they impact on the corporate reputation for 80 of the largest and most familia organisations in Ireland.

While Heineken topped the sponsorship table, the other brands and companies that made it into the Top 10 rankings include Lidl, Samsung, SuperValu, Coca Cola, Tesco, the Credit Union, Toyota, Kerry Group and Aldi.

Speaking at the launch of the Ireland Sponsorship Reptrak  2018 survey, Hans Erik Tuijt, Global Sponsorship Director for Heineken International said “It is an exciting time for Heineken® to return as the main partner to the European Rugby Champions Cup, the pinnacle of European club rugby.  The expansion of the tournament to emerging rugby territories and new cities in traditional strongholds provides Heineken® with the opportunity to create engaging fan experiences and bring our association with rugby to new audiences throughout Europe. Heineken® is proud to have had a close association with rugby for over 20 years and we look forward to watching the competition unfold across the course of the season.”

The study also reveals what kind of sponsorships are likely to be perceived by the Irish public as having the most positive impact on a sponsor’s corporate reputation. Although sport dominates the Irish sponsorship landscape, with the sponsorship industry reported to be worth more than €200m,  the study revealed that sponsorship properties that are either cause-related or linked to a charitable drive are most likely to improve an organisation’s reputation, according to 59% of the respondents.

However, this was followed closely by brands establishing strategic partnerships with either national sporting teams/bodies or directly sponsoring local sports clubs. Both kinds of sponsorships were considered by over half of the respondents (each received 52%) as being likely to have a positive effect on an organisation’s reputation.

Not surprisingly, sport featured predominantly amongst male participants but the younger cohort, those aged 18-24, involved in the study go against the grain.  They highlighted venue sponsorships (such as Three Arena/The Aviva Stadium), arts and culture (such as music festivals, comedy festivals, art exhibitions) as well as awards initiatives (such as Irish Book of the Year/People of the Year etc.) as their top three forms of sponsorship that are most likely to enhance an organisation’s reputation. Interestingly, venue sponsorships also featured prominently among the 25-34 age category.

Upon further analysis of the sports sponsorship scene, participants were asked to provide their views on what sport was likely to have the most positive impact on a company’s reputation.  The study revealed that seven in ten people (73%) ranked sponsorships associated with GAA Games as the most likely to garner support for an organisation’s reputation.  In second place came rugby (53%) followed by football (40%).

According to Gareth Field, Head of Sponsorship at The Reputations Agency, “The Ireland Sponsorship Reptrak® study set out to analyse how sponsorship activities link into the overall reputation for an organisation.  The results confirm that organisations aligning their brands with the right sponsorship property can enhance an organisation’s overall reputation. Organisations who are combining national sponsorship properties, communicated through local touch points, with activities which enable them to have a positive influence on society, are those most likely to resonate with their customers and the Irish public in general.”

A list of the Top 30 sponsorships is listed below. 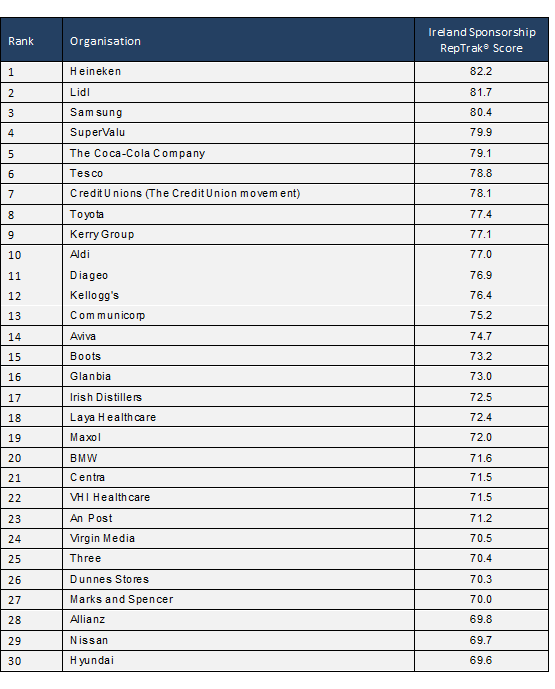