With ad impressions dropping by as much as 75% year-on-year and the cost of advertising skyrocketing by over 100%, what’s next for Facebook, asks Colm Sherwin.

It’s been an interesting start to the year for Facebook and Mark Zuckerberg. In early January, they announced one of the most significant changes to their newsfeed in years, where posts that create meaningful conversations would be prioritised above brands and publishers. By the end of the month they reported adjusted fourth-quarter earnings with revenue that crushed expectations, as it made more money than expected from each user even though in Zuckerberg’s own words “it was a hard year for the brand”. By March, Facebook hit its biggest crisis to date with the Cambridge Analytica scandal; where the Observer, the Guardian and the New York Times uncovered a leakage of data which so far has impacted 87 million users on the platform. This scandal has brought Facebook to the forefront of news headlines globally and resulted in Zuckerberg appearing in front of the US Congress and European Parliament to explain this breach of data for its users and in the past month. And, finally, last month they announced record quarterly earnings for Q1, which goes to show you there’s no such thing as a crisis for the tech companies.

So, the questions we now all ask are: what next for Facebook and how will this impact the advertising industry?

To answer these questions, we need to understand the scale of the platform first. Globally, over 2 billion people access Facebook daily. That’s over 500 million more people than live in China, the world’s most populated country. Locally here in Ireland, 64% of adults use the platform while 71% of those access it daily. If you were to compare this to a TV programme, this is nearly 500,000 more people than watched Ireland’s most popular TV programme of 2017; the Late Late Toy Show.

Because of its scale, advertising revenues have followed this audience. In 2017, 20% of digital revenue globally went to Facebook. It’s now the second largest advertising channel in the world. Locally the IAB states that approximately 15% of digital advertising investment was delivered here in 2017. In recent years, advertisers have become more and more reliant on the platform than ever before; so if any significant changes happen on Facebook, the impact your advertising strategy has on the consumer could change overnight.

The second area we also need to understand is that Facebook now has a clear trust issue with consumers, advertisers and publishers. A study recently commissioned by Core Research states that nearly 7 in 10 people don’t trust the platform.

This is higher than all the tech companies and even higher than sentiment towards the Irish Government. Media outlets globally are pushing for regulation, including the EU.  Some outlets are even going so far as claiming the product is addictive; a repeat of the early 90s “Tobacco versus US” cases where tobacco companies in the States denied their products were addictive. 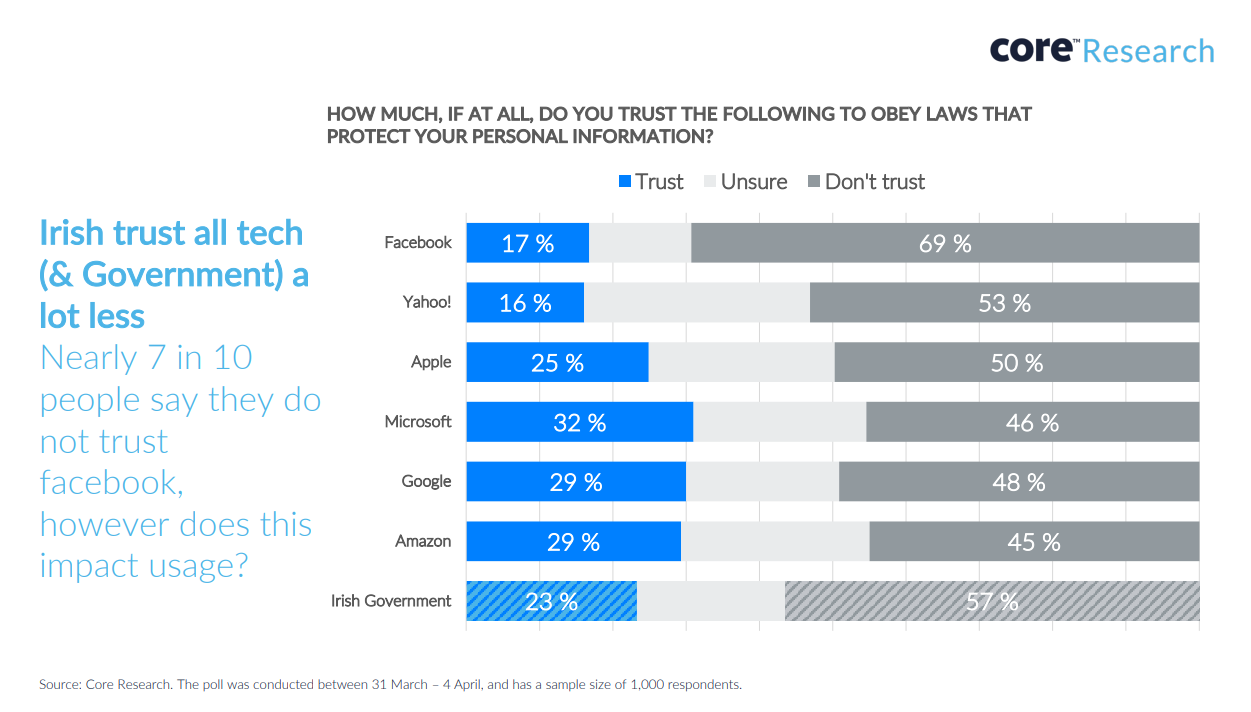 If you were to predict the impact these issues would have on Facebook, you would need to split the platform into two different brands; Facebook Europe and Facebook for the rest of the world. It’s safe to say, based on the Senate hearing last month, that leniency will vary between the EU and US in relation to the poor handling of user data. The EU will clearly come down a lot heavier on the platform with the first real impact being GDPR.  GDPR has been set-up to deal with the mis-use of data by all entities involved in the data eco-system.  Considering Facebook accounts for such a large percentage of our consumption online, the EU has the potential to come down heavier on these first to set a precedent for the rest of the market.

The next prediction is something that has been on the cards for a long-time now; the introduction of an ad-free subscription-based model as optionable for consumers. Zuckerberg has hinted for years that this might be introduced but knows this would have impacted on scale if introduced earlier. Just look at WhatsApp. This has seen almost double the growth since it dropped its €1.50 yearly subscription model in early 2016.  Short-term – less than 1% will sign-up to this model. Long-term & especially when/if video becomes big for the platform this could change.

And the final prediction is the potential of regulation for Facebook. At the Senate hearing, each Senator referenced that over-regulation in the US could limit innovation; but closer to home it’s clear the EU doesn’t have this stance. If regulated here this would hold Facebook accountable for all content that appears across their platform – a game changer for the industry that would result in extra costs that would include both people and tech to protect consumers online.  As well as this, they’d be held accountable for all acquisitions going forward that could impact growth as users divert to newer, trendier platforms. In the past they’ve been very fortunate with their acquisitions including Instagram and WhatsApp.

What this means for advertisers?

Facebook claim minutes spent on the platform will drop by 5% in H1. With this, the amount of ads year on year are predicted to drop by 20%+, creating a potential supply/demand problem for advertisers. AdStage, a US advertising company, is claiming ad impressions year-on-year have already dropped by 75%, while costs have increased by 122%.

Locally, we’ve seen costs between early January and April increase by 12%, while year-on-year costs have increased as much as 36%, depending on the category. If global trends are replicated locally, advertising budgets might not stretch as much as previous years on the platform.

Another key area for consideration is the impact paid content advertising might have versus previous years. In the UK, some key publishers have already witnessed drops in traffic from Facebook of between 10 and 40%. If this trend is replicated here, advertisers will have to evaluate the long-term impact certain publishers might have on their plans. So far the signs have been positive with no real impact on volumes of impressions across paid content partnerships in the local market. Publishers have reacted quite positively and migrated more of their attention to other more stable platforms.

And the final area to consider is the speed of change happening for all stakeholders within the marketing industry on social platforms in general. In the past few weeks we’ve seen both Facebook and Google take more ownership, banning referendum ads on their platform.  WhatsApp introduced a new minimum age of consent to use their platform, Facebook announce a new dating service for their users and last but certainly not least, all social platforms announce their interpretation of the GDPR legislation. Things are changing quicker than ever before and by the time this goes to print who knows what will have occurred.