Colum Harmon of PML Group looks back on 2022 and the key trends in terms of sectoral and brand investment in OOH during the year.

A significant increase in investment by the finance sector and among zero-alcohol drink brands were prominent trends on OOH in 2022. A full review of the Outdoor sector will be sent to PML Group clients in the coming week but in the meantime, we today publish the top investing advertisers, brands, and categories for the last twelve months. Figures and percentages are based on our WATCH market intelligence service, and includes cycles 1-26, 2022.

Retail remains the top spending category on the medium, increasing its display value by 1% compared to 2021. More significant is the fact that retail accounted for more than 15% of all OOH display in 2022, with supermarkets responsible for 9% SOV.  Second behind retail was Beers and Ciders, including zero alcohol variants. 2022 saw a 31% increase in OOH investment for non-alcohol brands, reflecting an increase in demand for such products in Ireland. 25% of all Beers/Ciders activity is now for zero-alcohol brands.

The biggest percentage year-on-year increases in display value among the top 10 categories were for QSRs (including food delivery services) at 13%, Finance at 11% and Tourism and Travel, also at 11%. The increase in financial activity was driven by banks, up by 30%. One factor behind that increase was the race to recruit customers of those banks departing the market. 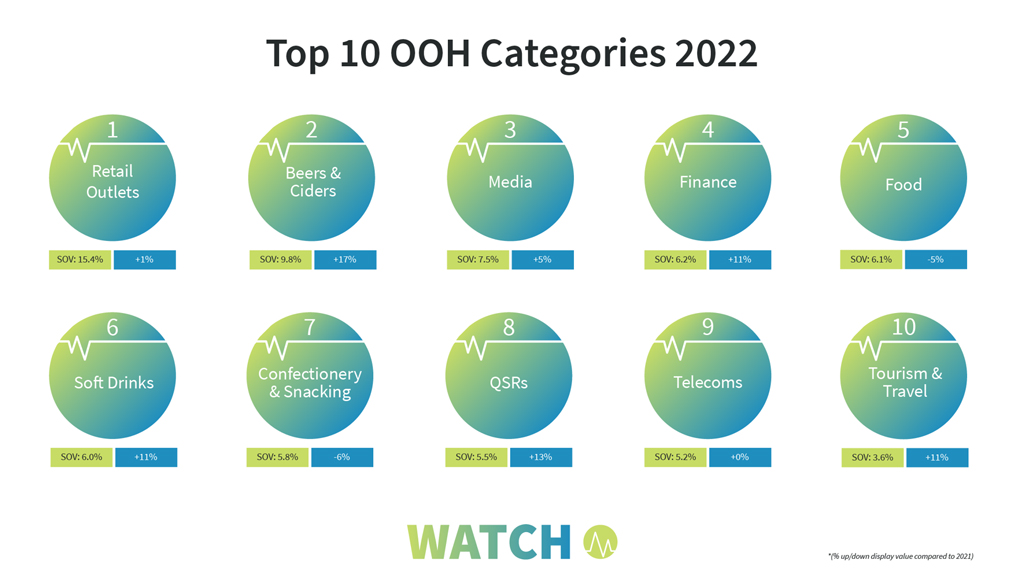 Guinness was the highest investing brand in 2022, followed closely by Sky, McDonald’s, and Cadbury. Figures for Guinness include Guinness 0.0. Others among the top 10 brands include Virgin Media and Lucozade.

When it comes to advertisers, Diageo was the largest on Outdoor for the past year. Apart from Guinness, the company’s other major OOH brands included Rockshore, Carlsberg, and Smirnoff. Both Musgrave Group (Centra and SuperValu) and Tesco feature among the top ten advertisers for the year, reflecting the position of Retail in the category rankings. Disney was the highest spending media advertiser, accounting for 2% of the market. 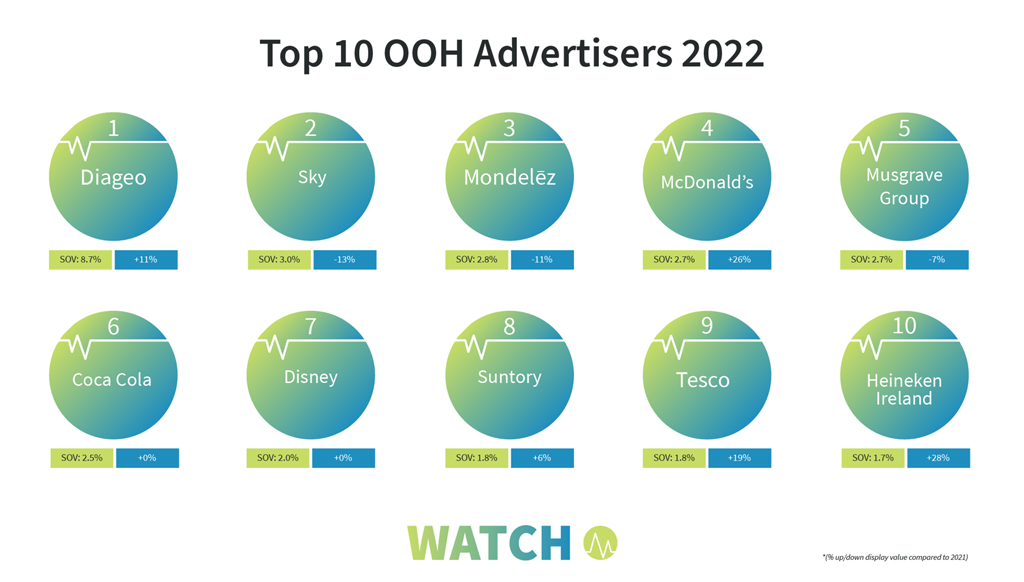 On average, both the top ten categories and top 10 advertisers increased their OOH display value by 6% in 2022 compared to 2021. This reflects a year of growth for the medium following a turbulent couple of years for Outdoor.

Large increase in non-meat eaters in 2023

New iQ research from PML Group and Ipsos shows a significant year on year increase in the number of Dubliners who are vegan or vegetarian. At the beginning of 2022, the iQ study of 300 Dubliners revealed 11% to be vegan or vegetarian. In 2023 that figure has now risen to 18%, an increase of 64%. Meat eaters have decreased from 85% to 78% in the same period. 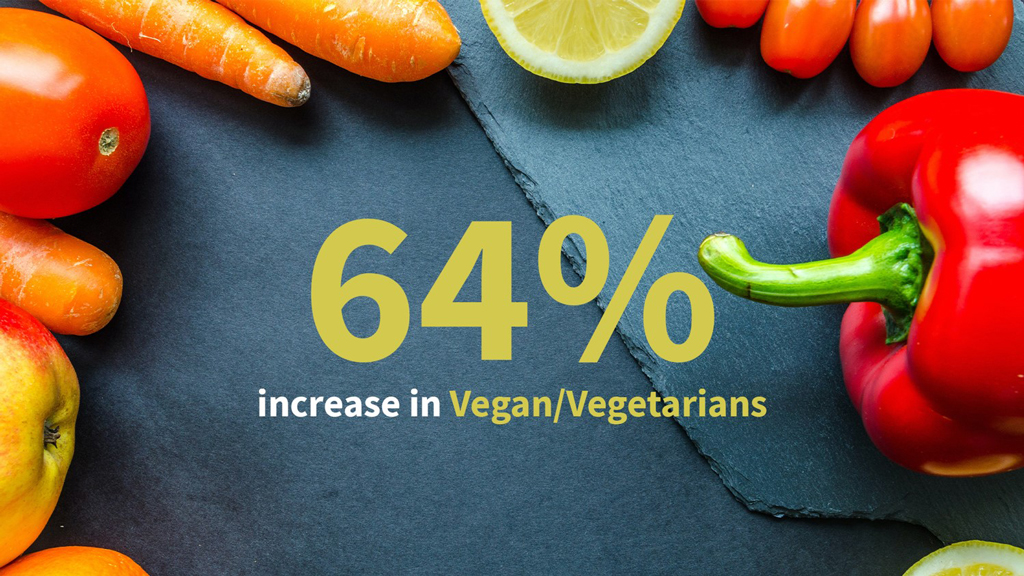 In the year since our last study of this subject, there has been a massive increase among 25–44-year-olds who have tried plant-based meats. 74% have now tried such products, compared to 62% this time last year. 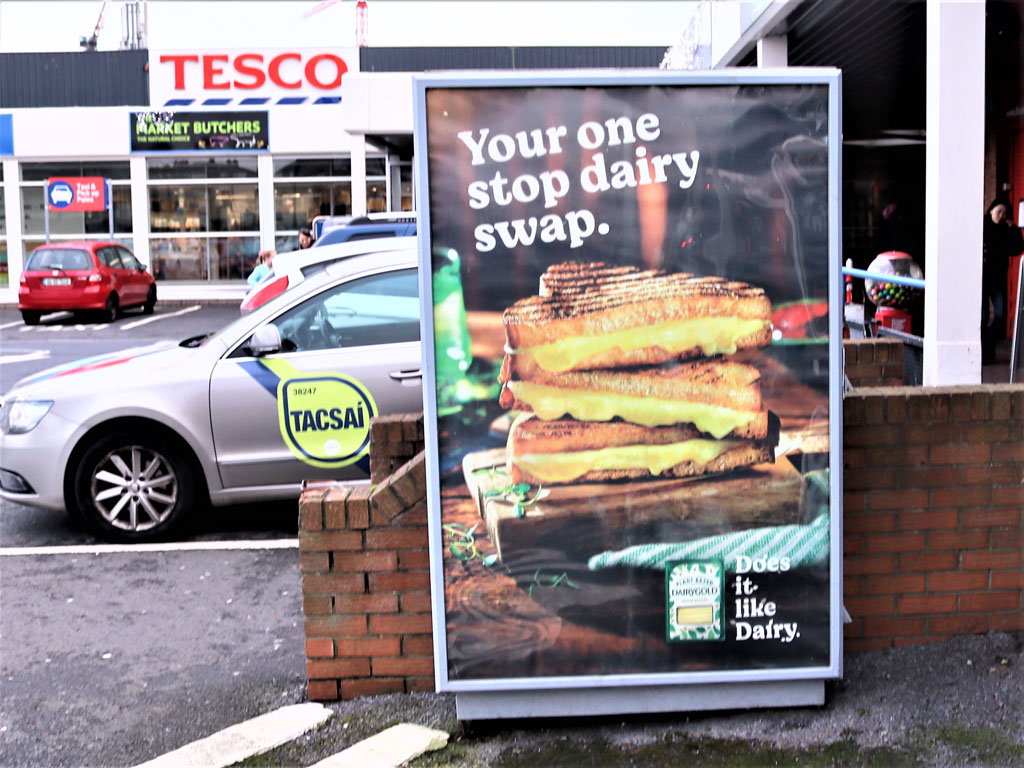 Those partaking in ‘Veganuary’ this year remains consistent, with 15% abstaining from all animal products this month, a very slight increase from the 14% who participated last January. More than half intend to continue some form of meat abstinence in 2023, with 51% to do one or more meat-free days each week. An inevitable outcome of such an approach will be an increase in fruit and veg intake, with 77% claiming they will increase their consumption in 2023. 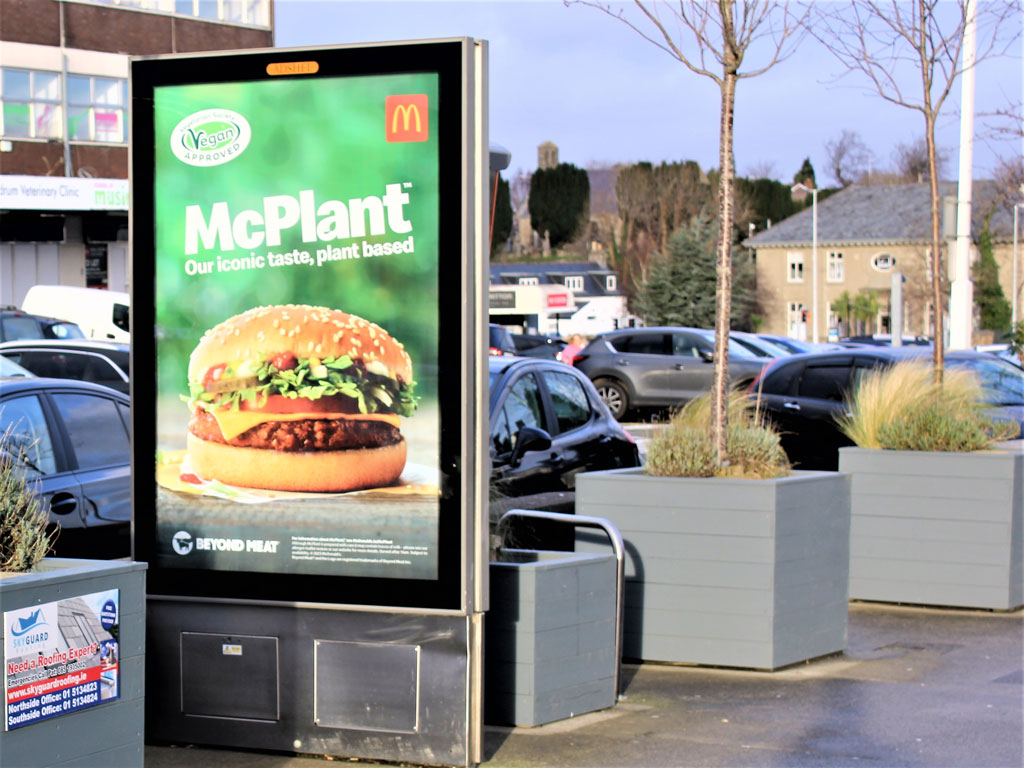 It all points to a consistent trend now truly emerging among the Dublin public. For brands, OOH is the ideal path to purchase channel to engage both health and environmentally conscious consumers during that all important window of decision making.

Some weeks ago, we discussed how McLaren were innovating on Out of Home into by featuring tiny DOOH screens positioned in front of F1 driver’s cockpit cameras. The automotive space continues to impress with OOH innovation as Skoda have begun to creatively advertise their new ENYAQ line, reaching drivers where their attention is at a high point: backing up into a parking space. 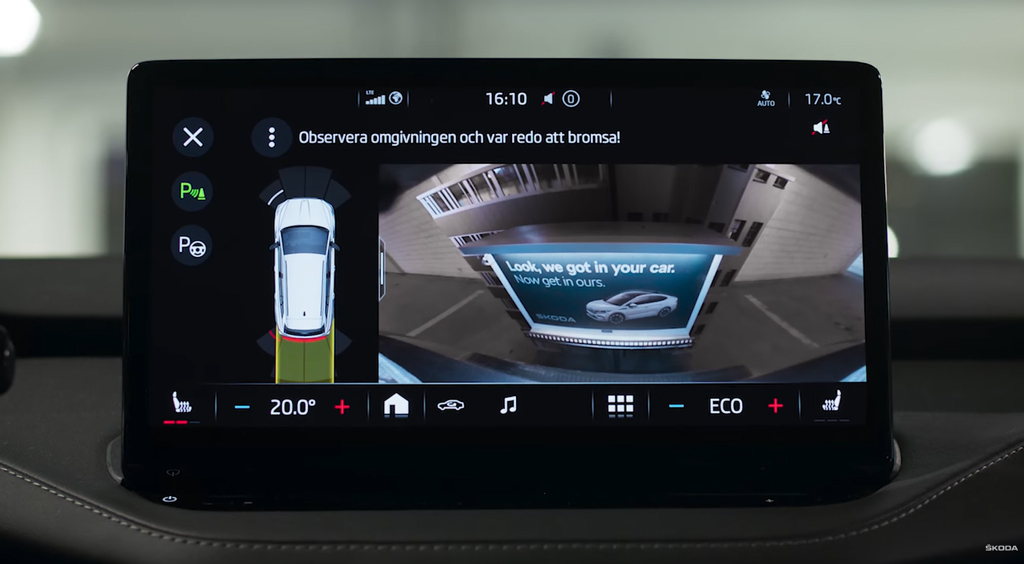 The tiny 48-sheets appear to drivers via rear-view camera screens while reversing into parking spots, surrounded by model cityscapes, teasing drivers of other car brands by displaying ‘Look, we got in your car. Now get in ours.’

This is not the first time in recent years where miniatures have been used as a creative marketing tool. Last year’s Virgin Media Dublin International Film Festival employed the clever use of a miniature billboard adjacent to a standard 48 Sheet to encapsulate the two-fold approach to 2022’s festival, which returned to both cinemas and online as a hybrid set of events.

Additionally, Marvel’s Ant Man campaign featured several hundred miniature billboards produced ‘for the ants’ as part of the film’s promotion in Australia, becoming a viral sensation on social media as people sought them out and shared sightings.

Watch Skoda’s promo video above, which signs off with tongue in cheek messaging stating ‘thank you, competitors, for the ad space’.