High Anticipation for Six Nations
Following a successful autumn series and with a world cup less than a year away, there’s no doubt as to the added significance of the 2023 men’s rugby Six Nations Championship. Although still a few months away, the games are sure to come around fast and Ireland get the competition underway in Wales on Saturday, February 4th (Cycle 3). The world’s top ranked team has two massive home fixtures in next year’s series, against France on February 11th and, in the final round of games, against England on March 18th (Cycle 6).

Both home fixtures will be fantastic opportunities to engage the match going crowds, but the entire series offers brands the chance to leverage the uniquely positive relationship the Irish public have with the rugby team and the Six Nations competition. Research PML Group commissioned in recent weeks, and carried out by Ipsos, reveals that a whopping 72% of Dubliners intend on watching the Six Nations games next spring. This figure is relatively consistent among age groups, peaking at 76% for 16-24s and 45-54s. 85% of the AB social group will be tuning in. 75% of men intend to watch, compared to 70% of females. 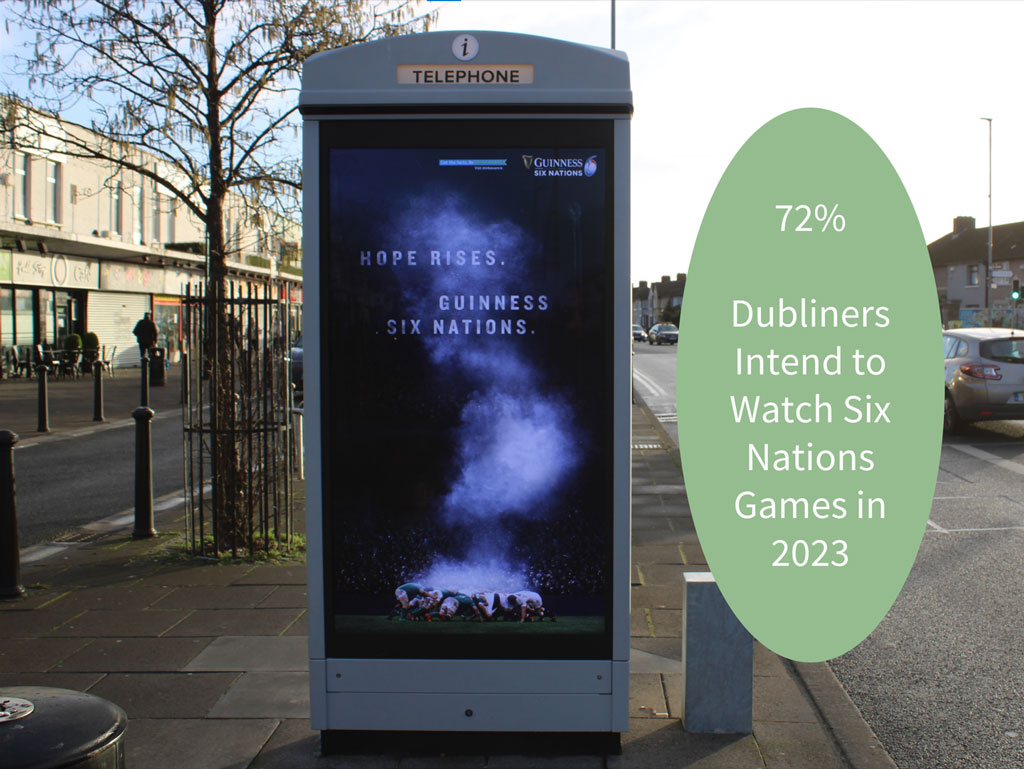 More than 40% will be watching matches either at a friend’s house or in a pub/bar. More than one in ten respondents are hopeful of being able to attend a game in person. Those aged 16-34 are most likely to be watching the matches outside of the home.

Sports events offer brands the opportunity to use OOH in a contextually relevant way, employing dynamic content to optimise messaging in the run up to the match, during the game, and post-final whistle. According to our OCS study 35% of those passionate about rugby union are VERY interested in Digital Screen messaging relevant to a live sporting event (Index: 172) while a further 40% are quite interested.

Another element of this latest wave of PML Group iQ research was to ask respondents for words they associate with the Irish rugby team. As you can see from the word cloud below, the responses were overwhelmingly positive with words such as strong, exciting, winners, passion and proud among the most popular choices. Interestingly, some brands are featured here with respondents automatically making the connection between sponsors and the team itself. Brands who feature heavily include Guinness and Vodafone. 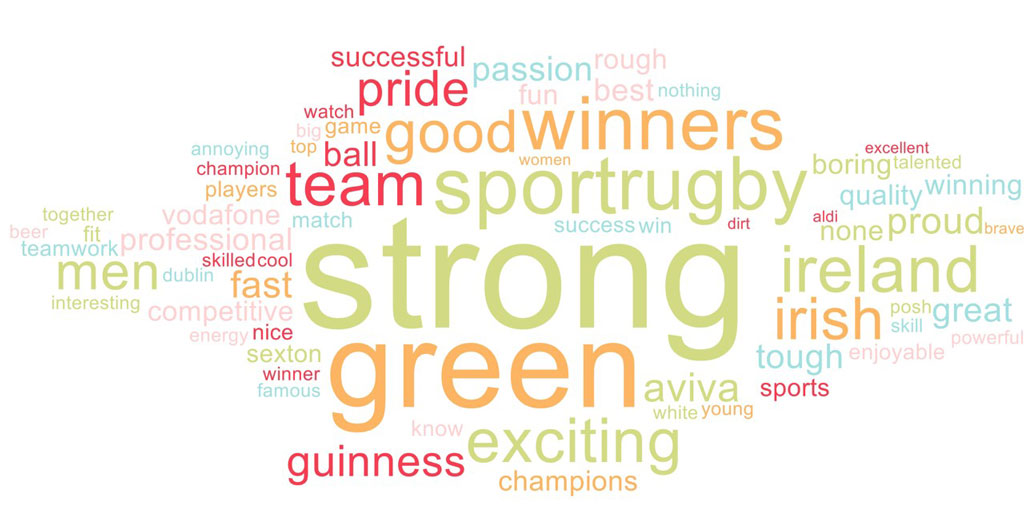 Speak to our team about optimising your OOH for the Six Nations games.

One in every five euro invested in OOH in November was in the retail category. The supermarket sector was in full competitive mode as we entered the crucial pre-Christmas period and, across Cycle 23 & 24, retailers invested more than double that of the second biggest spending category, Beers. Apart from supermarkets, other retailers were also highly active with Curry’s running a Black Friday promotion and brands such as JD Sports and Harvey Norman also visible in November.

Media was the third most active category in November with activity for Disney, Amazon, RTÉ and TG4 among the most prominent.
In terms of campaigns, Dunnes Stores and Tesco were the top two for the month, followed by the Department of the Taoiseach, which used OOH to convey important messaging around energy saving as we enter the coldest and darkest part of the year.

Following on from the anticipated release of their ‘Wrapped’ statistics for 2022, streaming service Spotify are once again extending their now-seasonal event beyond the platform and into the tangible world.

Now famed for the buzz it causes in social circles, the in-app feature has been hugely successful since its first implementation in 2016. Morphing from a showcase of extrapolated user data into an effective viral marketing campaign, the feature presents users with a ‘story’ of the artists and genres they’ve streamed the most over the last year and encourages them to share and compare results with friends on social media.

Fortunately for Spotify this data also provides an abundance of potential as regards DOOH tailoring, made possible by Liveposter through PML Group.

Planned by PML and UM Dublin, running across Digipoles, Digital Golden Squares, and the Green Screen @ Stephen’s Green Shopping Centre, the campaign is fully embracing the tenets that encompass digitally enhanced OOH planning. With the capacity to run multiple copy across the same locations, in combination with their unique dataset, Spotify are displaying eyecatching creative that is also contextually relevant via proximity targeting. This has made it possible to run Fontaines DC-centric creative on Digital Golden Squares in proximity to their Vicar Street concert, which took place in early December. 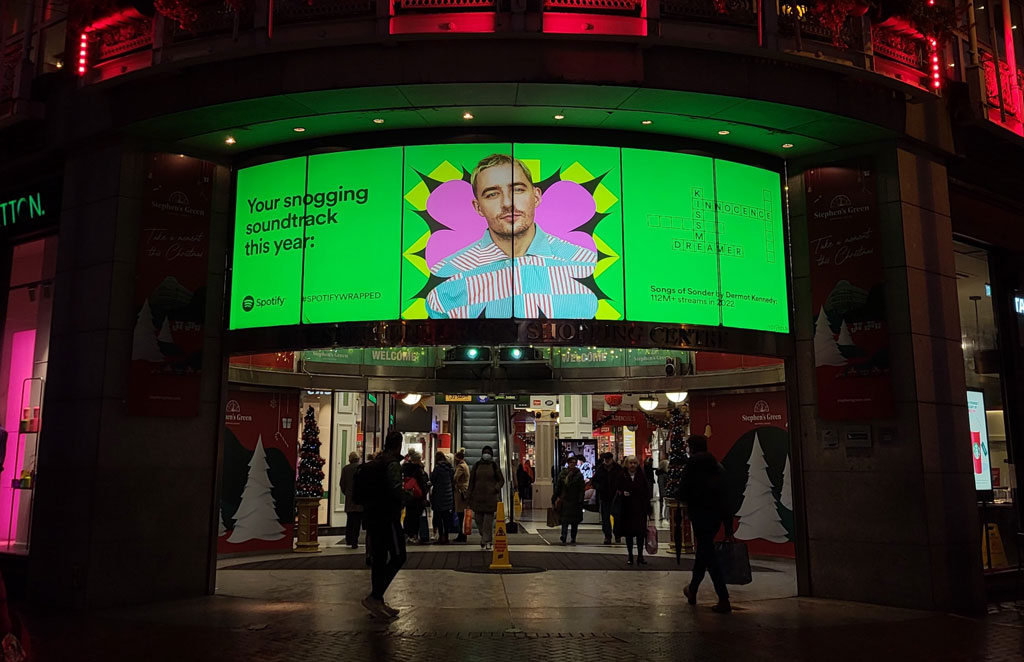 For 2022, the music giant has opted to introduce new elements of personality adjacent to the usual fare. These include activity-focal creatives featuring pseudo-crosswords and tick-the-box trivia, stemming from the service’s new ‘listening personality’ feature added to this year’s Wrapped. 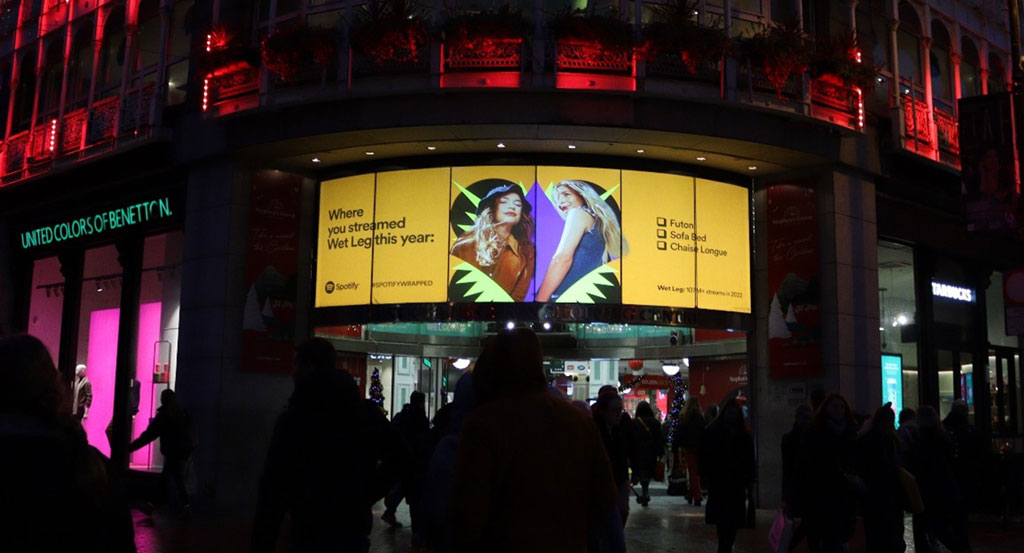 In a media call, Spotify VP & Global Executive Creative Director Alex Bodman noted Spotify OOH has become a seasonal tradition. “People seem to enjoy seeing us out in the world at this time of year. We show up in a colourful and hopefully witty and insightful way.”