James Byrne, marketing manager PML Group with this week’s Out \ Look on Out of Home.

The OOH calendar has moved on to cycle 20 this week, a bridge between September and October and the gateway into the final quarter of 2022.  An indicator that the nights are drawing in is the return of Wild Lights to Dublin Zoo. The spectacular, night-time experience at the zoo is back with an exciting brand-new theme – The Magic of Life! To promote the event, an OOH campaign consisting of big impact digital formats including DX Screens, Digital Bridges, Digital Golden Squares and Digipoles is being rolled out this week.

According to dublinzoo.ie, ‘over a thousand breath-taking, dazzling lanterns will portray a fascinating and important story by shining a light on biodiversity. Through this transformation of Dublin Zoo visitors will have the opportunity to learn more about the Magic of Life and also the role they can play to help our planet.’

Another popular favourite back this year is the McDonald’s Monopoly promotion. The game offers customers the chance to win instantly in-store or via collecting and completing property sets to win prizes. The promotion is being supported on OOH via classic formats such as 48 Sheets, 6 Sheets and Supersides, as well as DOOH options including Golden Squares, dPod, iVision and Adshel Live. The colourful creative showcases some of the many prizes on offer this year, including cash, a holiday, Nintendo Switch and vouchers for I Saw It First and JD Sports.

The promotion ends on October 18th.

Lots of film activity in cycle 20 also. The much-anticipated sequel to Avatar hits the screens in December. Prior to that, the original movie is currently on re-release and is being promoted on Adshel Live screens. The Woman King appears on T-Sides with Disney’s Amsterdam featuring on Digipanels.

Some good news for commuters from the budget this week. According to the department of transport, ‘this year’s budget ensures that public transport across the country will remain cheaper for commuters and particularly younger people throughout the year’.

Key transport points from the budget include:

Outdoor also has a crucial role to play in delivering sustainability messaging. Marketeers have a responsibility to showcase their green credentials, and consumers want to know about it. We’re more environmentally conscious than ever and many people will choose to support brands that make their ethical standpoint clear.

Our ‘Green Means GO-OH’ research showed that 84% of consumers expect advertising to clearly explain the environmental benefits of products while 66% are more likely to buy environmentally friendly products.

Marketers have a role to play in bridging the sustainability gaps in companies according to a report entitled Marketing and Sustainability: Closing the gaps, from the World Federation of Marketing which highlighted three main disconnects:

Some reasons for these gaps are thought to be the lack of sustainability officers and the complexity of the topic, and the lack of knowledge and skills to talk about it.

To address the problems, the study highlights three core implications and action items:

Outstanding in its Field

To highlight the autumn specials in its Taste the Difference range, UK supermarket Sainsbury’s has planted a series of billboards in the middle of some of the farms where its ingredients are harvested. 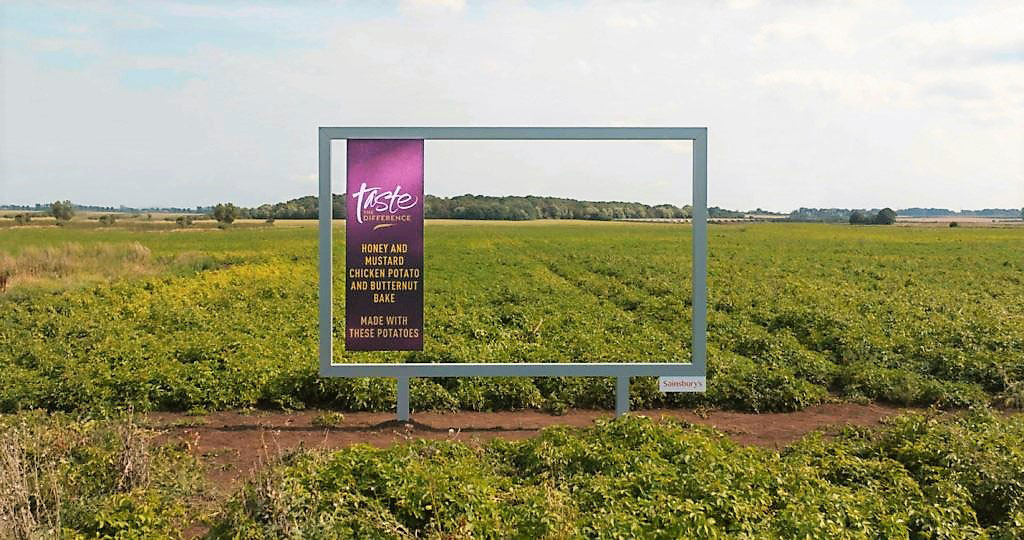 Promoting products including its apple and blackberry tart and potato tray bake, the bespoke transparent fixtures feature simple 2D branding and perfectly frame the farmland landscape around them.