Colum Harmon, marketing director PML Group with this week’s Out Look on Out of Home.

Back with a Bang

Out of Home media roared back in H1 2022, following on from a strong performance in H2 2021. H1 has been characterised not only by numerous Classic brand campaigns but also highly impactful special builds, contextually relevant Dynamic content, and the welcome return of experiential activations. Audiences have returned to more familiar environments for working, commuting, and socialising in 2022. Advertisers have capitalised on this trend and the channel’s classic strengths of impact and response are evident across a diverse range of brand and category activity.

Society is changing and emerging new attitudes and lifestyles among consumers are shifting product choices. This is moving the dial in terms of the product categories most prominent on Outdoor. We can all see it on a day-to-day basis. In the full year 2019, less than 10% of beer advertising on Outdoor was in the zero-alcohol category. In H1 of this year, that figure was 27%.  Guinness, Carlsberg, Bulmers, Heineken and Peroni have all supported zero-alcohol variants on OOH this year. Virtually all new car advertising is for electric or hybrid vehicles now on Outdoor. Streaming services such as Disney+ are among the top investing brands on the medium in 2022. 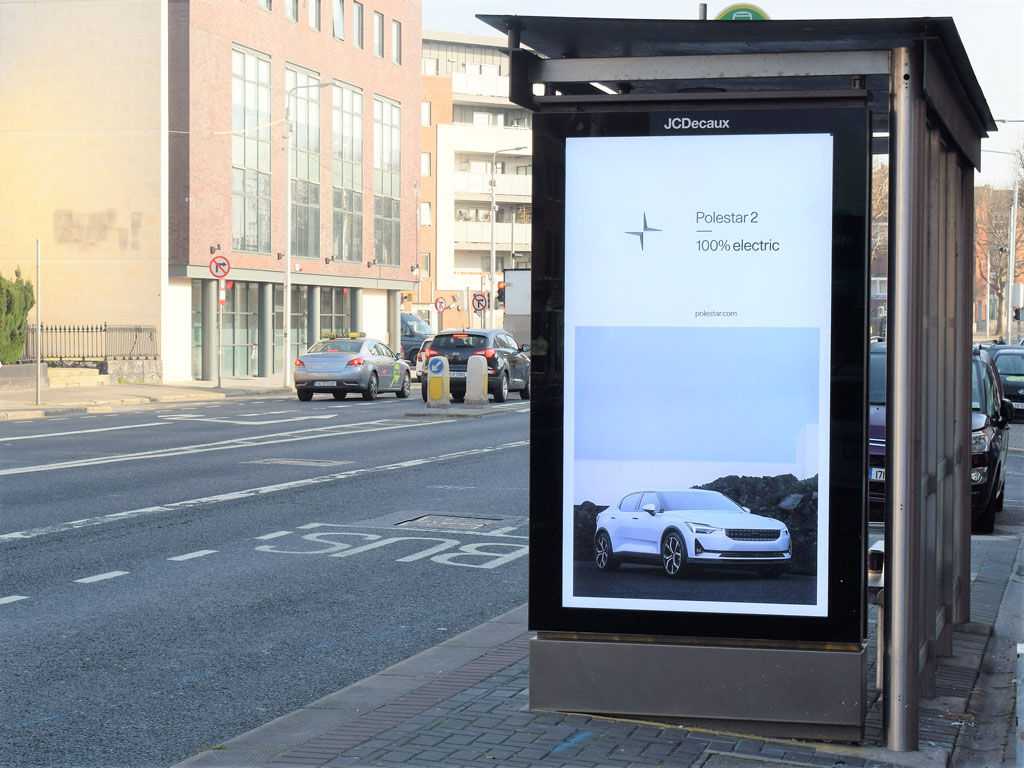 This is an evolving process that will continue to change the face of the medium. However, we are also seeing how more sudden changes are being reflected on the streets. The film sector, specifically cinema releases, have returned in a big way to Outdoor this year as movie theatres get back to normal business and, as some major banks leave the market in Ireland, the competition for new customers among the remaining players is clear.

No matter what products and categories are trending, the job they are doing on OOH remains fundamentally the same – arouse interest, drive response, build brands and positively impact sales and sentiment and they are being helped achieve this via an ever-improving OOH inventory.

Retail remains the top spending OOH category, primarily the supermarket sector. This speaks to OOH’s ability to influence through high impact, high frequency formats in the right environments. The sector is hugely competitive, and advertising often is about achieving footfall and prompts through offers so it was interesting in H1 to see Centra channel their Choices campaign through OOH, a proposition based on their research that 1 in 2 Irish people (46%) feel their daily choices have the power to impact positively on society. Through this campaign Centra encouraged consumers to think about choice, and to choose wisely every day. Retail accounts for around 15% of all spend on OOH this year, followed by Beers at 9% SOV and Finance at 8% SOV. 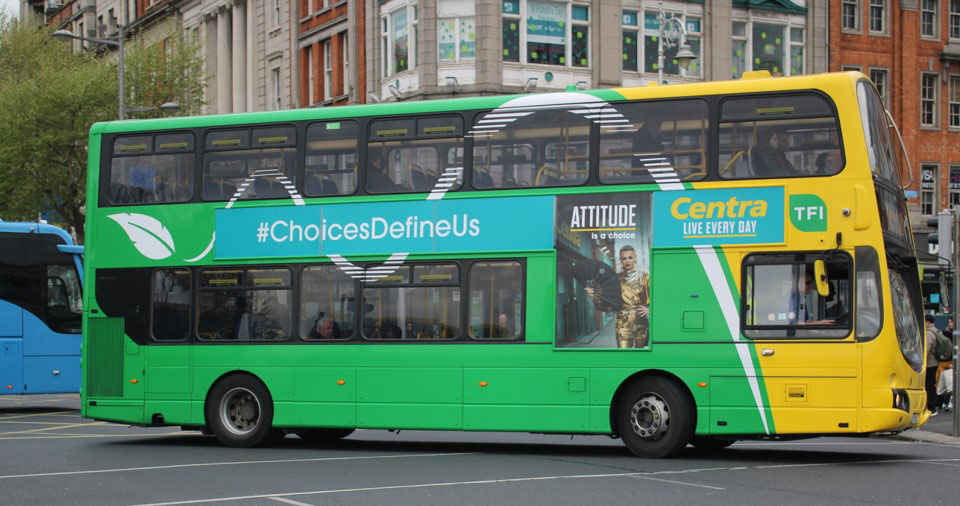 At the beginning of 2022 we published our Power Plays document, citing key pillars of OOH that make it such a powerful medium. We spoke of sophisticated mass marketing and a predicted return to brands combining classic impact campaigns with scaled digital innovation and special builds. The year has delivered many great examples of brands embracing the challenge and delivering stand-out pieces. Irish Life, Rockshore, McDonald’s and Corona are among brands who’ve integrated dynamically enabled triggers into their digital OOH campaigns to make them more contextually relevant to the time and the place. 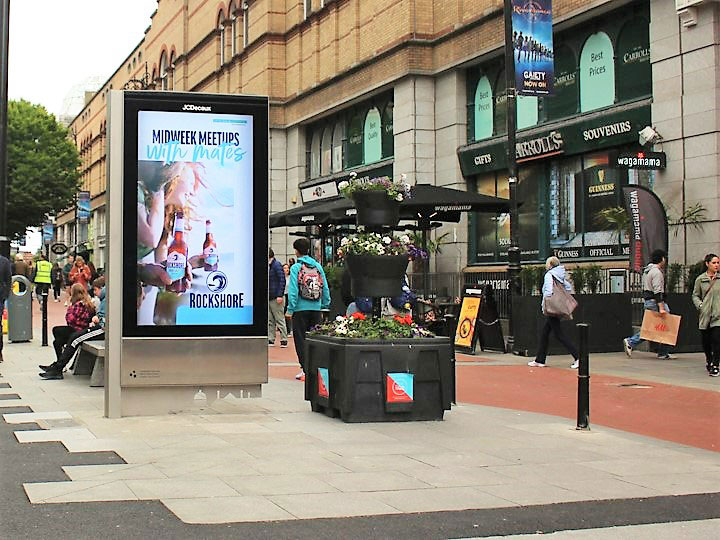 Disney+ were the first advertiser to embrace the new to market Amplify 3D offering on their DX Screen in Dundrum Town Centre. The same advertiser continued to use fun 3D special builds for their Book of Boba Fett launch while other notable special builds came from Virgin Media, Avonmore and Nurofen. 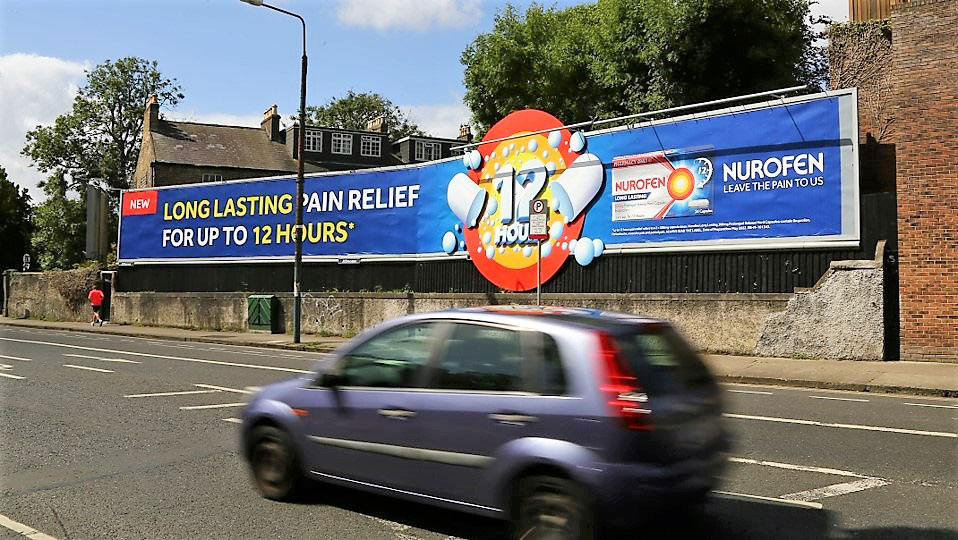 McDonald’s has increased its OOH spend significantly in 2022 with campaigns for McPlant, Wraps and Great tastes of Summer among others. The brand continues to activate dynamically, using weather as a trigger to great effect. But perhaps it was it’s ‘McVan’ experiential activation that was most noteworthy for the brand so far this year. Following two years of little or no direct consumer interaction for brands, we were delighted to work closely with the client and agencies to bring the mobile McCafé to many festivals and events since April, giving out thousands of free coffees along the way. It’s a campaign that should excite anyone with an interest in OOH, not only for its individual excellence, but also for what this indicates for the sector as move into the second half of the year. 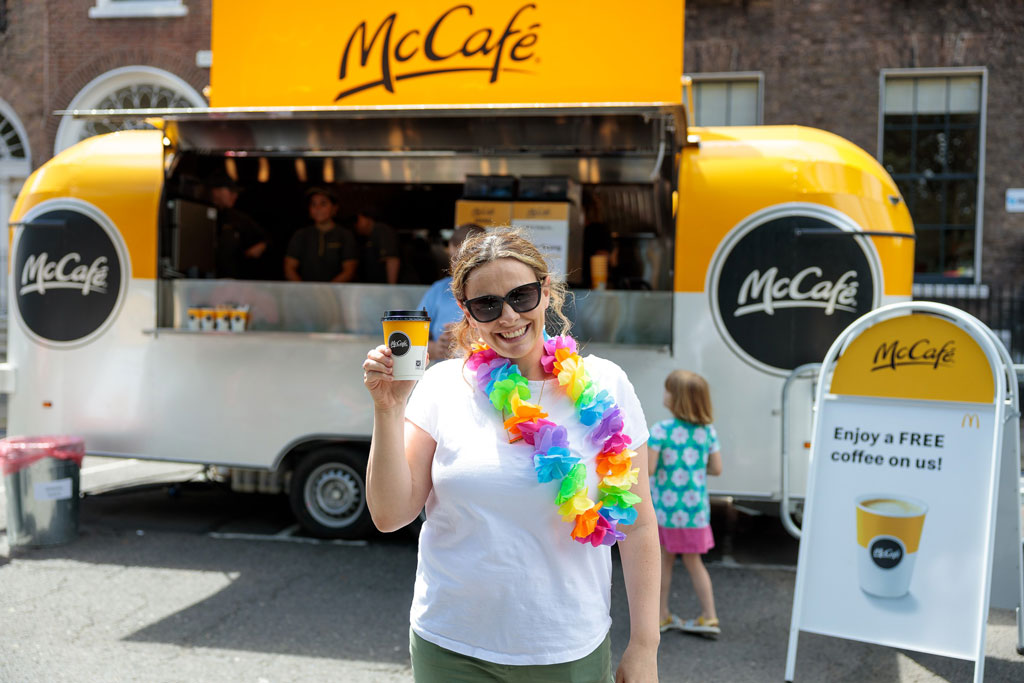 Out of Home is back, and its back with a bang!

Lucky Pants are no Joke

A twitter-enabled Bus Shelter dispenser is the centrepiece of a highly imaginative and impactful OOH campaign that hit the streets this week to celebrate the upcoming Paddy Power Comedy Festival. The festival kicks off on July 21st for four nights in Dublin’s Iveagh Gardens and promises lots of laughs from the biggest names in Irish comedy, including Deirdre O’Kane, Tommy Tiernan and Foil Arms & Hog. 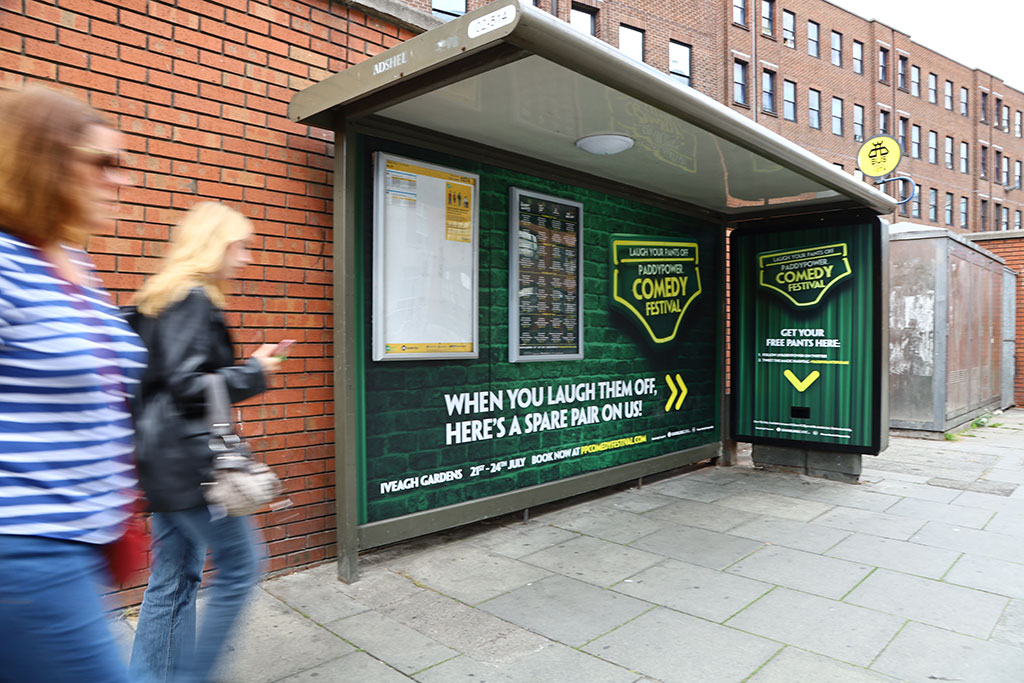 Concerned that the audience may in fact laugh their pants off, Paddy Power is giving away spare pairs via the Camden Street bus shelter, the nearest proximity panel to the festival venue. By following the bookmaker’s twitter account, passers-by and those en route to the festival can get their pants by tweeting the hashtag #paddypantsplease. The activation is a prime example of the synergies of mobile and OOH and how they can effectively combine.

Other stand-out elements of the campaign include location-specific copy on the Camden Corner special and the LUAS station domination at Harcourt Street. Both the inside and outside of a LUAS tram is also taken over, featuring fun copy and relevant festival information, along with a call to action to book tickets. 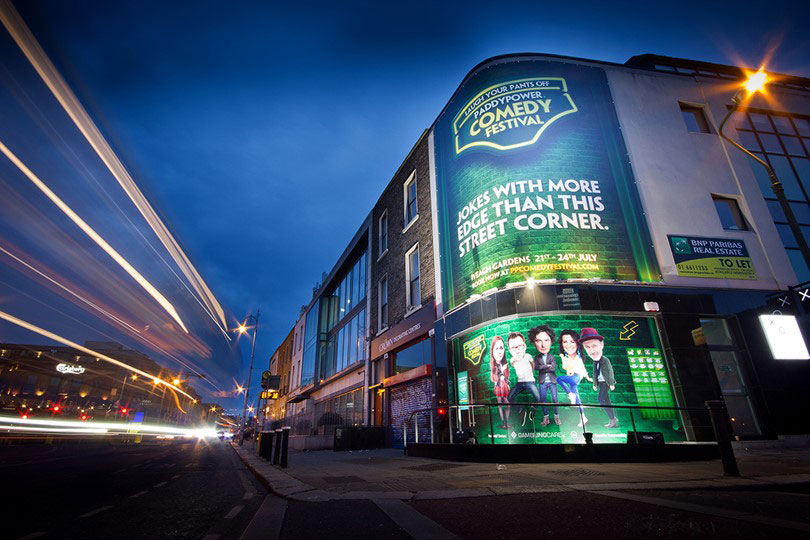 These special aspects of the campaign complement a Classic OOH campaign, consisting of large format billboards, bus shelters and bus T-Sides. Paddy Power’s eye-catching brand identity alongside some of the festival’s headline performers, on the chosen formats and environments, make it one of the stand-out OOH campaigns of the year. 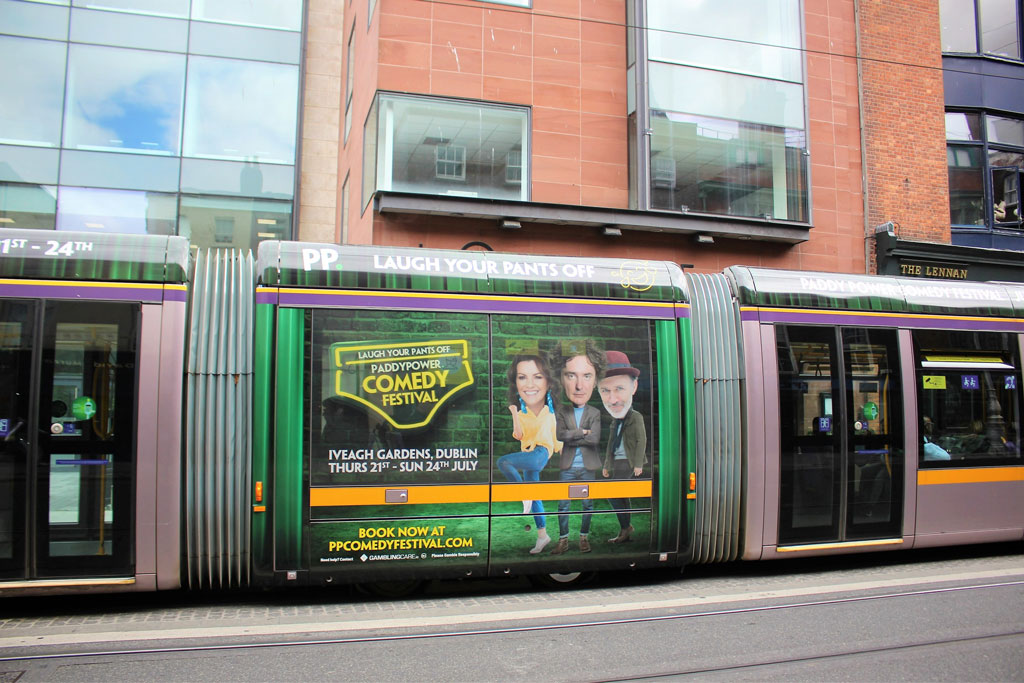 Karl Ellis, Head of Media, Paddy Power “As the brand spanking new sponsors of the Paddy Power Comedy Festival, we wanted to make sure our presence was felt in a truly unmissable way all across Dublin. With high impact activations all over the city, hopefully we’ve delivered a nice mix of formats that brings the festival & the brand to life ahead of its debut July 21st. If we can give the passing public a giggle as they make their way through town, all the better”

Orlagh Keane, Source out of home “The Paddy Power Comedy Festival is about generating laughter and fun and we wanted to reflect that in the Out of Home campaign. The pants dispenser will certainly put smiles on faces and the funny copy works so well in the chosen environments. It’s been a great campaign to work on.”