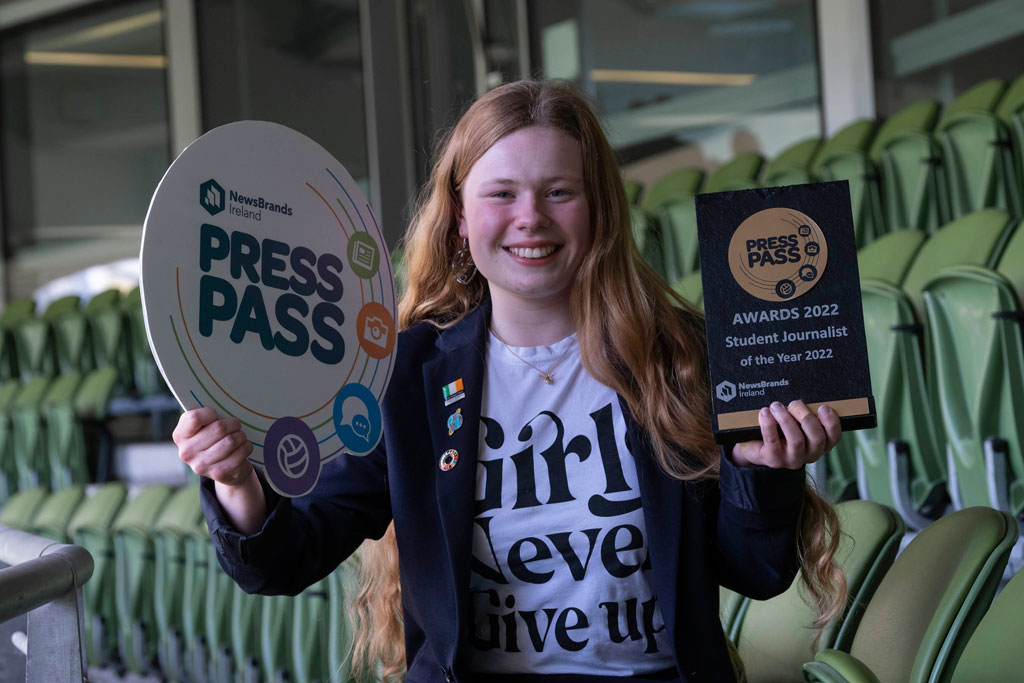 The winners of the NewsBrands Ireland Press Pass student journalism competition were announced this weel at an awards ceremony in the Aviva Stadium with prizes awarded in six categories including News Writing, Features, Opinion, Sports Journalism, Photojournalism, and best School Newspaper.

The event, which was hosted by Matt Cooper, was attended by the award-winning school students, their teachers, and families, along with national newspaper editors and journalists. A panel discussion regarding media literacy and the role of journalism in society and education took place with Sunday Independent Editor, Alan English, Irish Examiner deputy political editor Elaine Loughlin, and English secondary school teacher Mary Lowry.  The Special Guest was Catherine Martin, T.D., Minister for Tourism, Culture, Arts, Gaeltacht, Sport and Media.

Kate Lynch, a student from The Institute of Education, Dublin 2, was named the overall Student Journalist of the Year for her feature which included an interview with the new Trinity Provost.

According to Michael Foley, chairman of the Press Pass Judging Panel: “Kate’s interview was mature, engaging and insightful; it was confident without being blasé. The writer clearly understood that a great interview is more than getting answers, but is also those small details or observations that can bring a subject alive.”

Press Pass is a Transition Year student journalism and news literacy programme which has been run by NewsBrands Ireland since 2012. The free programme, which has been completed by 110,000 students, seeks to teach the fundamentals of journalism writing, improve news literacy and critical thinking skills, and encourage students to analyse content and form opinions about important social issues.

Participating schools receive access to free digital news, a Teacher’s Lesson Plan, and a specially created student workbook. This year, NewsBrands also teamed up with the Department of Education’s Junior Cycle for Teachers Support ( JCT.ie) to provide webinars and podcasts for teachers which included advise and inspiration from renowned journalist and editors.

During the Press Pass module, students are encouraged to engage with newspapers and digital news in the classroom, to analyse the journalism and then to create their own original journalism, the best of which is entered into a national competition.  The judging panel comprises of a group of leading newspaper journalists, which is chaired by Michael Foley, Professor Emeritus of Journalism, TU Dublin. The Press Photographers Association of Ireland (PPAI) judged the photojournalism category.

“Congratulations to all our finalists and to the members of the judging panel who took the time to read through the many entries and pick the talented winners. A special thank you also to the passionate teachers who teach the Press Pass programme every year,” says Annemarie Lenihan, CEO of NewsBrands Ireland.

A full list of all the winners is available HERE