The Public House, FleishmanHillard and Carat have come together with Mondelez and FAI to launch a new campaign supporting grassroots women’s football under the call to action ‘Become A Supporter & A Half’.

The campaign featuring real Irish amateur women’s footballers, is an extension of Cadbury’s recent ‘A Player & A Half’ work which launched the news that it had taken on the role of Republic of Ireland Women’s National Team Official Snack Partners.

The campaign was born out of insight gleaned from a survey conducted in partnership with the FAI which highlighted poor access to facilities and equipment for female football players in grassroots clubs around Ireland. In an effort to help to address this

gap, Cadbury has launched exclusive in-store activations at SPAR to increase awareness for and improve playing conditions. Cadbury are asking members of the public to ‘Become A Supporter & A Half’ by purchasing a Cadbury Dairy Milk in participating SPAR stores nationwide. 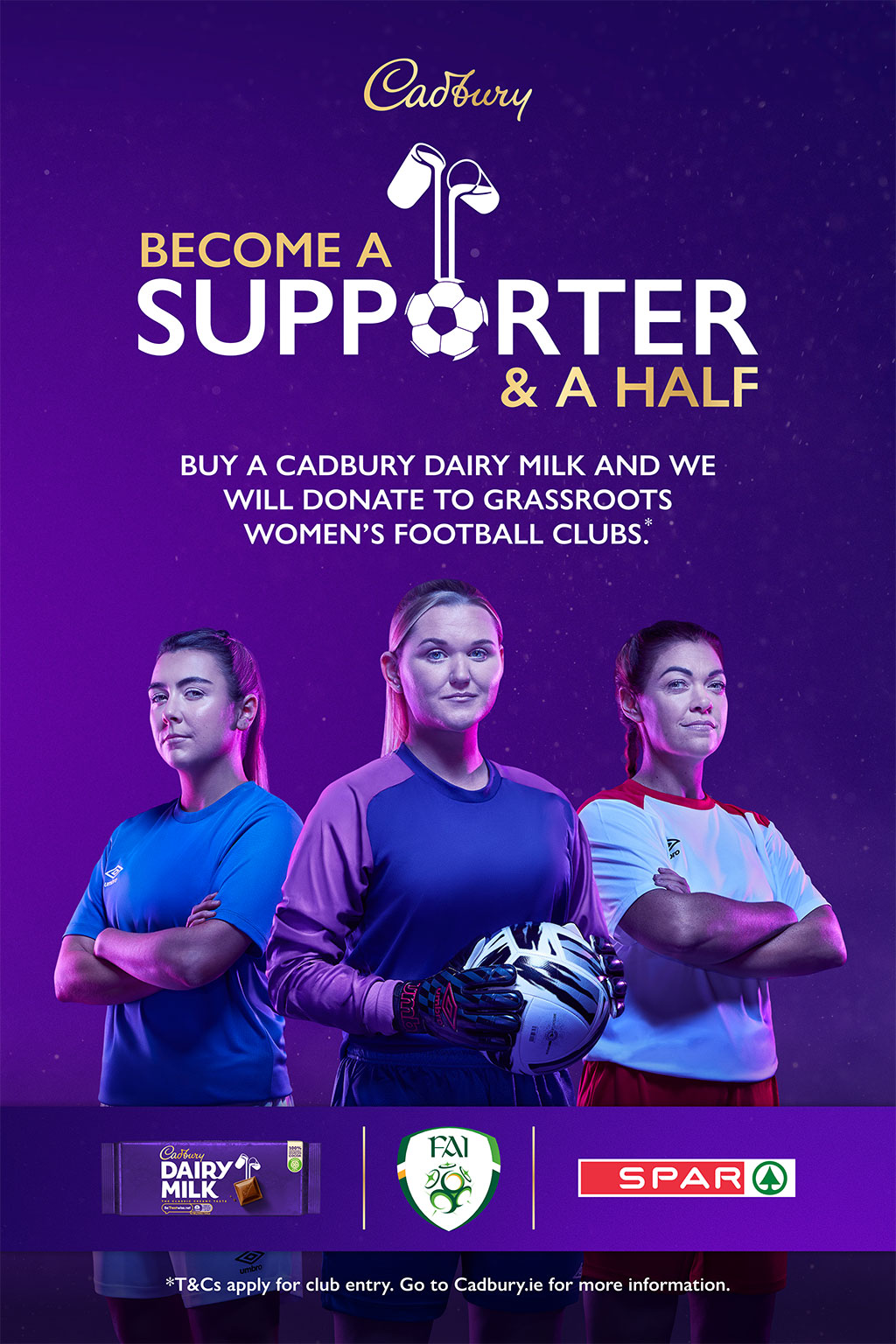 “We’ve been working towards this ‘Become a Supporter and a Half’ campaign for the past six months and we are thrilled to see it come to life across OOH, in-store, digital and PR activity. This campaign was developed on the back of in-depth research that aimed to determine the barriers that women’s grassroots football teams face today and we are really looking forward to seeing who the five winning clubs will be and how the donations will impact their clubs,” says Eileen Leahy, brand manager, Cadbury.

According to Mikey Curran, senior copywriter at The Public House:“As a nation, we need to reframe how we look at women’s football, not just for 90 minutes, but the rest of the time too. We truly believe that change can start at the bottom and can work its way up. Providing grassroots players with better equipment might not sound like the most direct way to support the women’s national team, but it will safeguard it for the future.”

Gill Madden, head of brand marketing at FleishmanHillard, added; “At FleishmanHillard we are extremely proud of our long relationship with Cadbury and to be working alongside agency partners, The Public House and Carat on this incredible campaign. ‘Become A Supporter & A Half’ aims to break down some of the barriers that women’s grassroots football teams face today, and we know that improving facilities is a great place to start. The real impact will be to see how, over the coming years, attitudes change, and women’s football is viewed in the same way as their male counterparts.”

Oilbhe Doyle, business Director at Carat added, “Carat are immensely proud and excited to be involved in this partnership, we now have the opportunity to build intelligent conversations – to get under the skin of what really matters to us culturally, to get into the grassroots, to change the conversation and reshape the future. We know that by the age of 13 – many girls have labelled themselves as not sporty – many clubs have low funding – poor equipment and poor facilities. By placing ourselves at the forefront of this conversation, putting women’s football firmly in the spotlight and treating it with the same respect male football gets – we have the opportunity to make an impact where it matters and begin to close the gap.”