TBWA\Dublin has created a powerful new campaign for the International Organisation for Migration (IOM) that highlights the chilling and sinister effects of human trafficking.

The prevalence of human trafficking in Ireland is likely higher than official statistics report, and according to the US State Department’s annual Trafficking in Persons (TIP) report, which ranks Ireland as a tier two watchlist state, experts are concerned about the number of victims formally identified and believe that it doesn’t reflect the true scale. According to blueblindfold.ie, there were 318 victims of human trafficking identified in Ireland in the last five years, but the real figures are potentially even starker, with data showing human trafficking could be 38% higher than reported.

According to Yvonne Caplice, business director, TBWA\Dublin: “The statistics about human trafficking in Ireland are really shocking so together with IOM, we created a social campaign to open the eyes of the public to the fact that modern day slavery is a crime which exists in Ireland in the form of human trafficking, to help people know the signs to identify a potential victim and to be vigilant of anything suspicious.”

The campaign was created and produced by TBWA\DUBLIN with IOM providing thematic expertise and oversight, and was shot by their in-house director Matthieu Chardon in conjunction with Make, the production arm of TBWA\Dublin.

TBWA\Dublin executive creative director, Des Creedon says: “This campaign is all about how human traffickers profit from the misery of their victims in a perversion of the idea of employment By using the everyday language of employee rewards and recognition, we wanted to highlight the inhumanity that victims are forced to endure – but in a very real and affecting manner.”

Niall Staines, creative director added “The campaign uses the “Employee of the Month” motif to showcase this perversion of employment, as we hear and see this recognisable workplace recognition, but then suddenly as we become more aware of the circumstances, the scene changes to something far more sinister. The social campaign hopes to raise awareness first and foremost that this type of modern slavery, takes places in Ireland today. It then asks us as viewers if we are suspicious or have concerns to speak up and check out the website “anyonetrafficked.com”

IOM Ireland’s chief of mission, Lalini Veerassamy concludes: “ Human trafficking is a hidden crime happening in Ireland, and it can be challenging for victims to escape situations of exploitation or feel confident to come forward for assistance. This means it is important for the public to be aware that it is happening, and to know how to spot the signs, report a suspicion or get further information.” 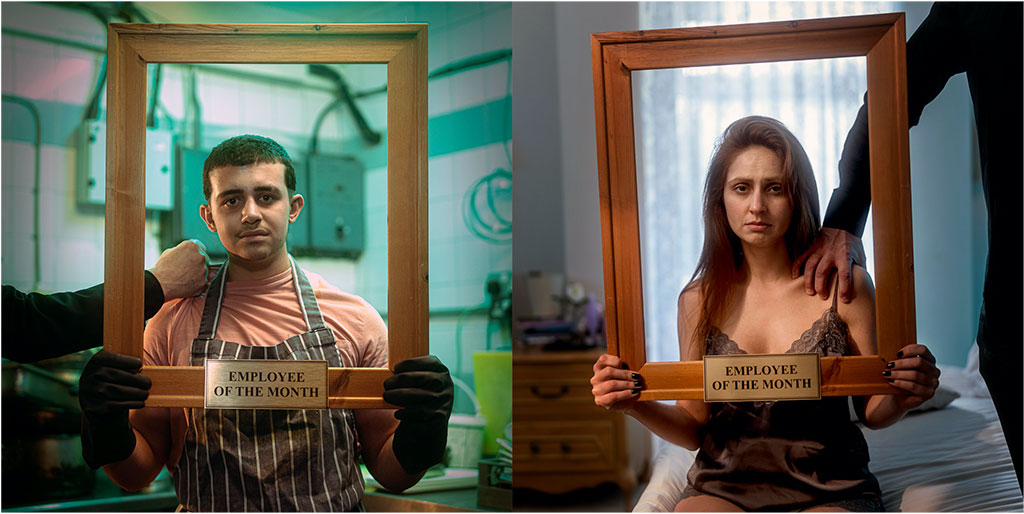