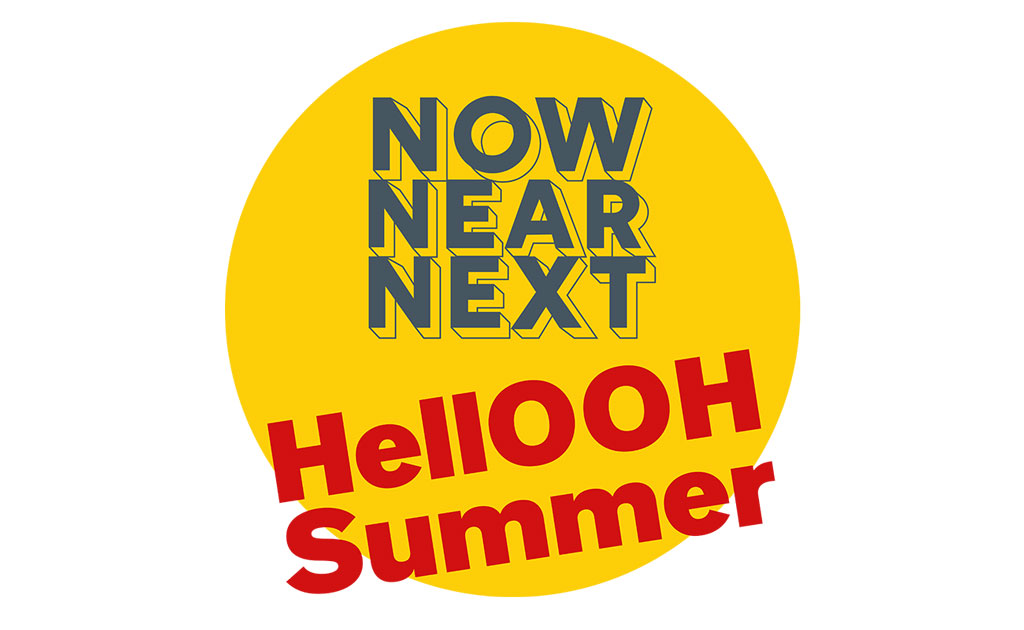 It has been another positive and hope filled week in Ireland with the next stages of the summer reopening announced and the lifting of restrictions on a wide range of economic and societal activities imminent.

The staycation season is now underway with hotels and other accommodation services opened, catering to the domestic tourism demand.

The Irish Independent reports that the June bank holiday weekend will kick-start a €1bn boost for the pandemic-hit Irish economy as thousands are set to flock to beaches, parks, mountains and beauty spots.

It is estimated more than 500,000 people will travel this weekend to avail of the easing in restrictions and the reopening of some hospitality venues.

The upcoming Bank Holiday Monday (June 7th) will see another substantial reopening with outdoor hospitality permitted, and cinemas, gyms and other leisure activities back in action. Sport spectatorship will return, and outdoor events and socialising capacities expanding.

A number of pilot events will take place across the month of June including the Camogie National League Finals in Croke Park for 3,000 people, and an outdoor music festival in Phoenix Park for 3,500 people.

The anticipation and pent up consumer demand is evident as we see the nation embrace the great outdoors and re-engage in longed for activities. Our own ‘Stepping Out’ research revealed a wide range of the aforementioned activities are already hotly anticipated.

The reopening speaks to a positive OOH narrative, the resumption of retail and other services in May have already had a significant impact on footfall, mobility and spending. As a result the frequency and opportunity to see OOH advertising in roadside and retail environments only intensified.

With an influx of environments reopening, various OOH and DOOH formats are now more readily available, bringing a plethora of creative canvasses back on stream that advertisers can reach and influences audiences with. Hospitality and leisure venues are full of OOH advertising opportunities and like other environments, dwell times are high, and audiences are more receptive to advertising in these settings. 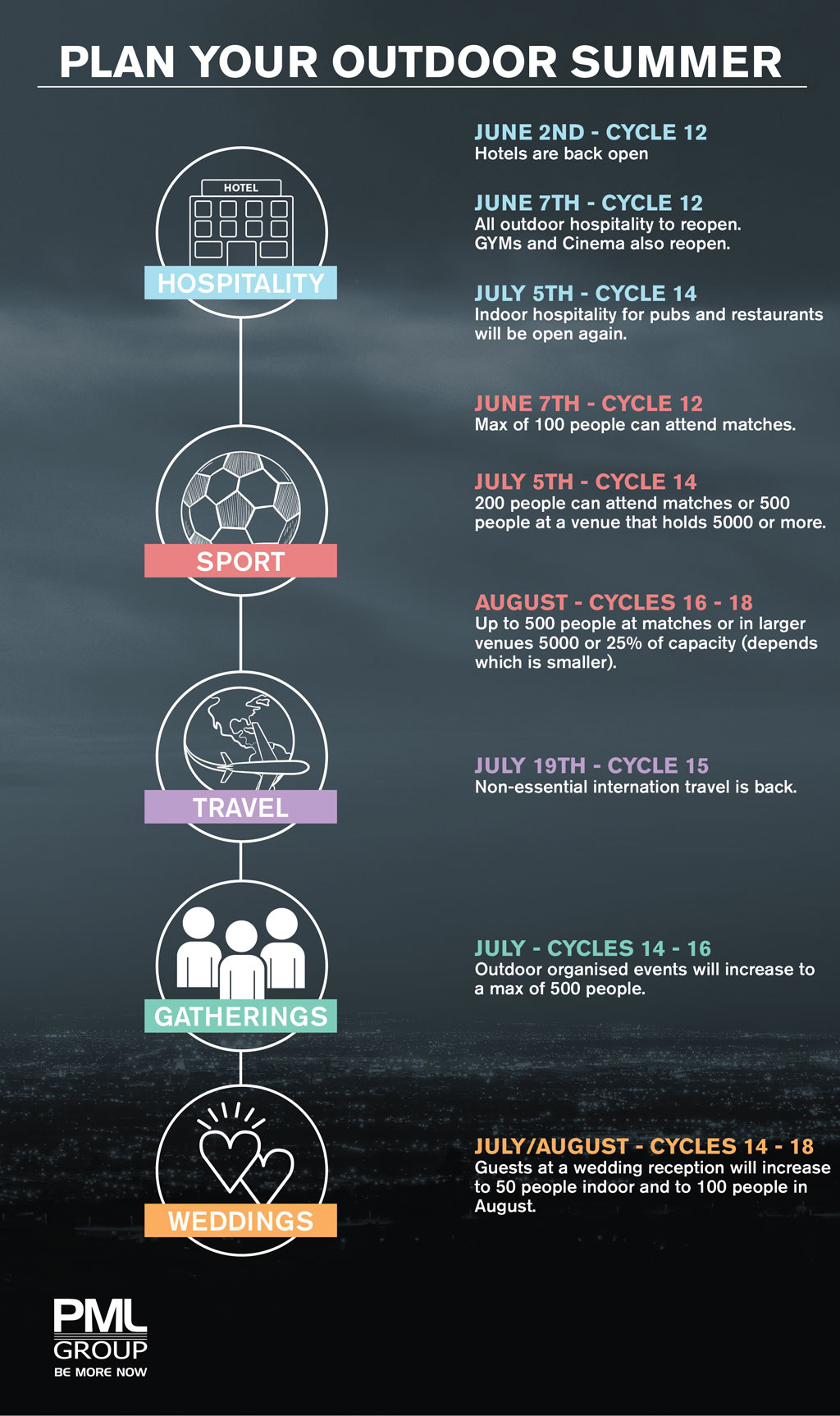 Three separate mobility studies report road traffic in Ireland has now reached or indeed surpassed, pre-pandemic levels. Together they provide a compelling argument for the comprehensive revival of the OOH audience as we enter the summer season and provide optimism for the second half of the year.

Last week’s national Locomizer mobility data, based on analysis of mobile phone location movements via anonymised app reporting, shows a relative +11% increase on week previous, to +10% of pre-pandemic levels. This constitutes a relative increase of +30% over the past fortnight, +50% in the past three weeks and a doubling since the end of March. 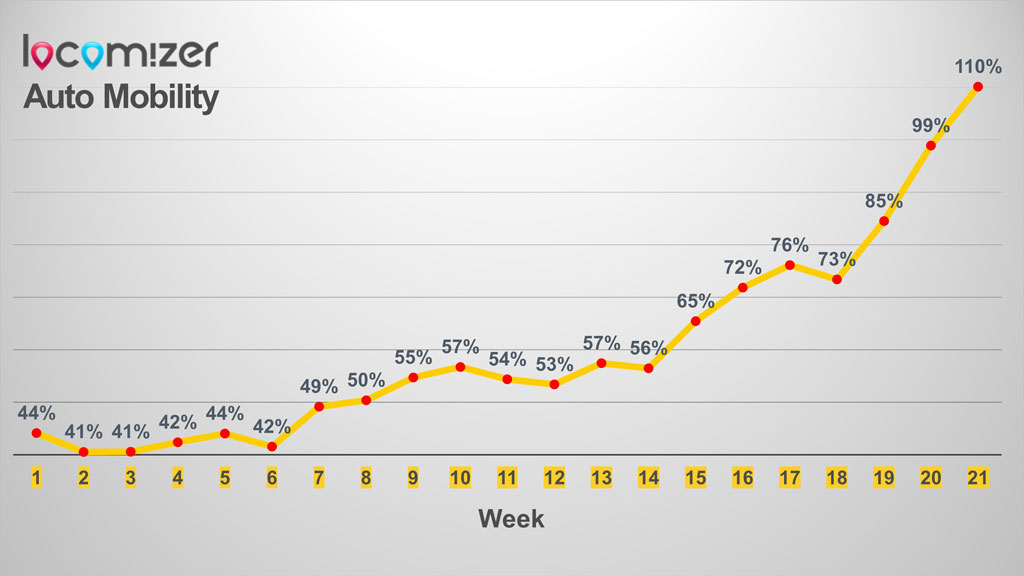 The seven-day average for Apple’s routing requests mobility data to Wednesday 2nd June shows traffic in ROI continues to surpass last year’s pre-pandemic baseline reaching 113% up from an average 101% the previous week. Transit has jumped from 63% to 78% as has walking from 67% to 85%. 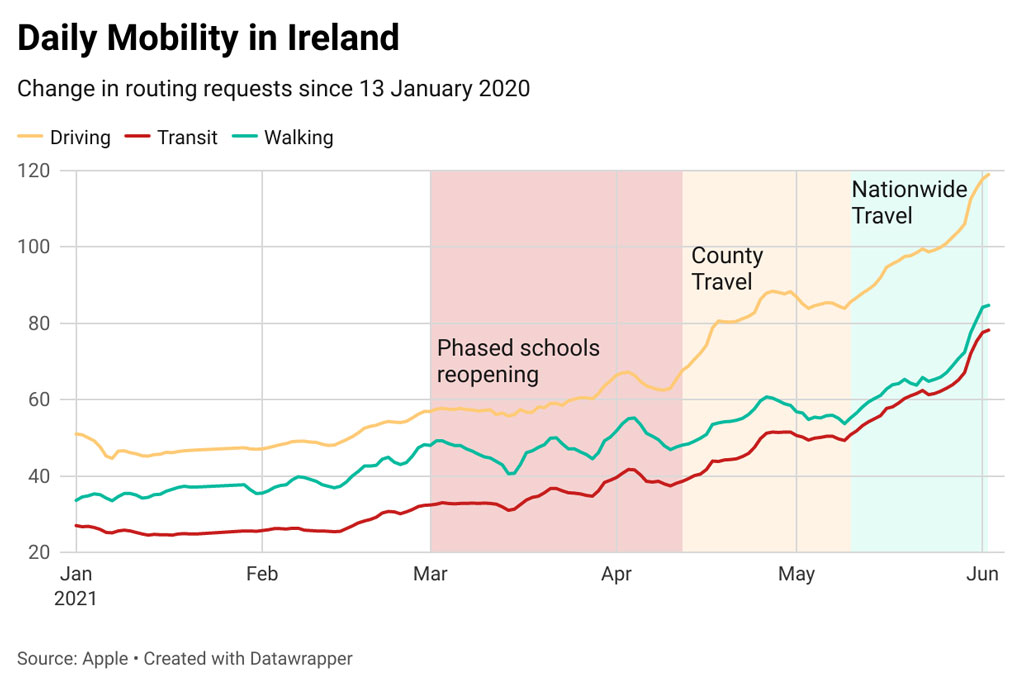 The sustained increase in mobility, across all modes, since the turn of the year is borne out by the monthly averages, albeit on two days in June so far included.

TomTom’s Traffic Index reports that last week’s congestion in Dublin reached parity with 2019 levels averaging 45%, up from 26% in March and 33% in April. 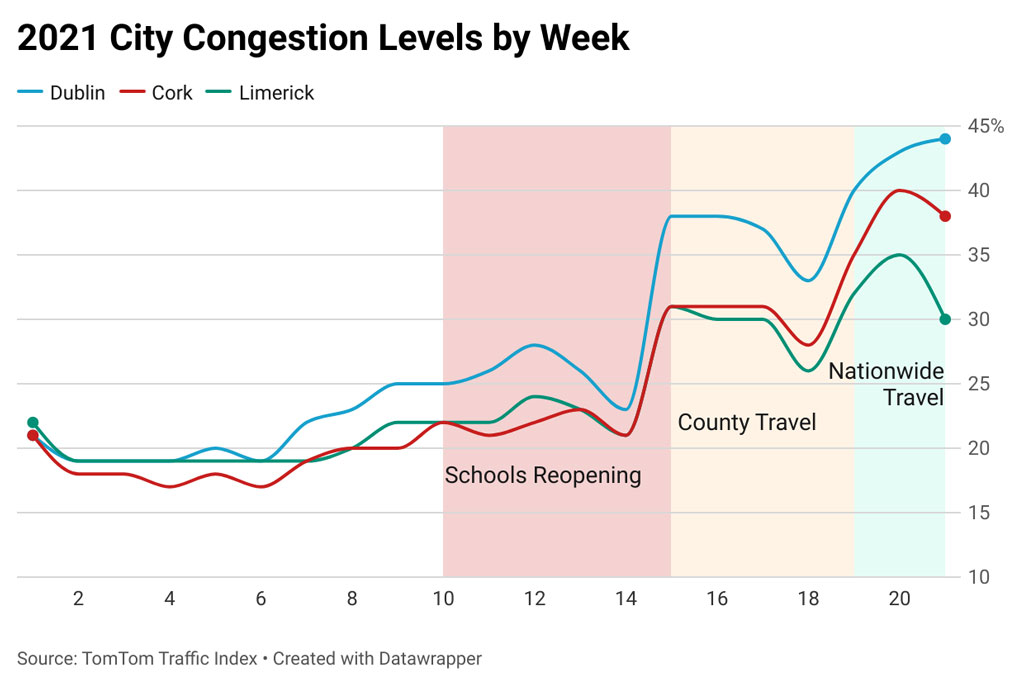 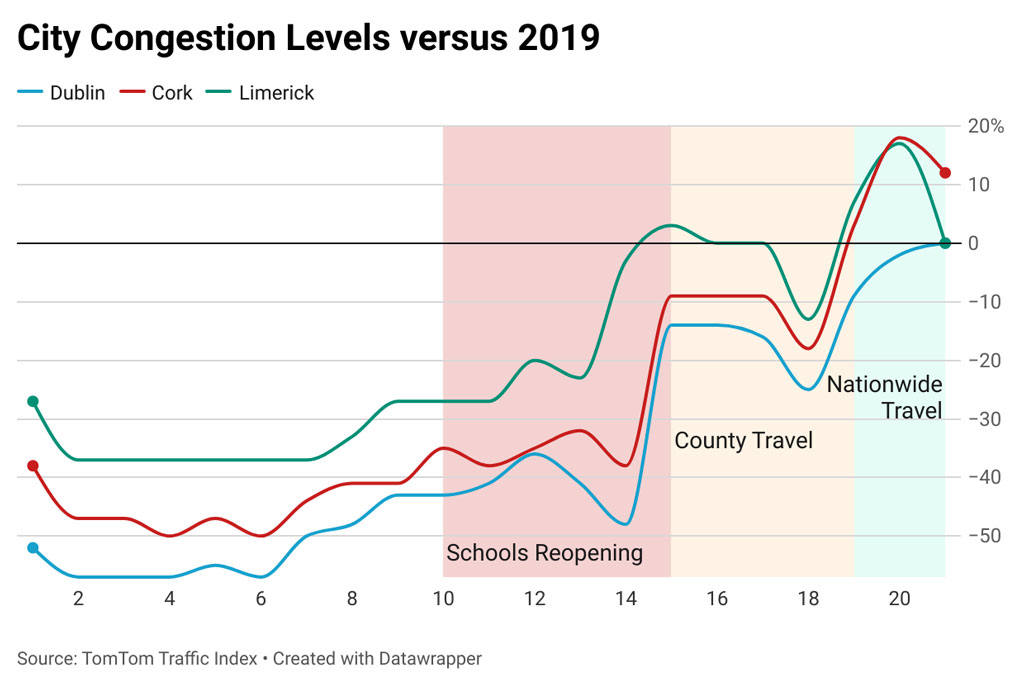 Footfall on the high street has also recovered in the last few weeks following the reopening all retail and personal services, with footfall on Grafton Street recovering to 80% of per-Covid levels according to DublinTown.

A definite sense of anticipation among some of the messaging from brands active in cycle 12 (31 May – 13 Jun) on Out of Home. A big summer of football is about to kick off across Europe and both Cadbury and Pringles have football related promotions running at point of sale at present. Pubs of course will reopen next week for outdoor service and Guinness are running their ‘Ready when you are’ message in advance of Monday. Disney’s release of Raya through their streaming service also features, while Philadelphia go with a cheeky ‘see you shortly’ message to shoppers, encouraging in-store purchase. 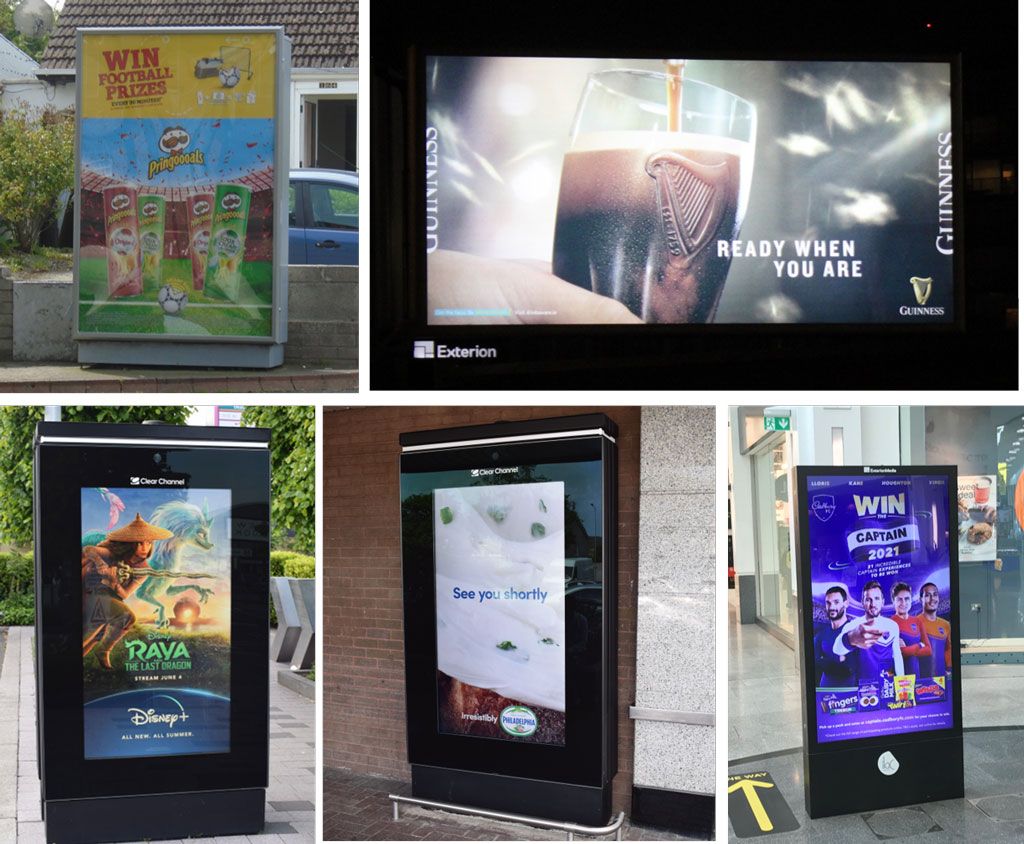 The Kantar analysis revealed sales declined by 5.2% year on year for the 12-week period ending 16 May 2021, however it is important to note the comparison is made against record breaking growth at the height of the pandemic last year. 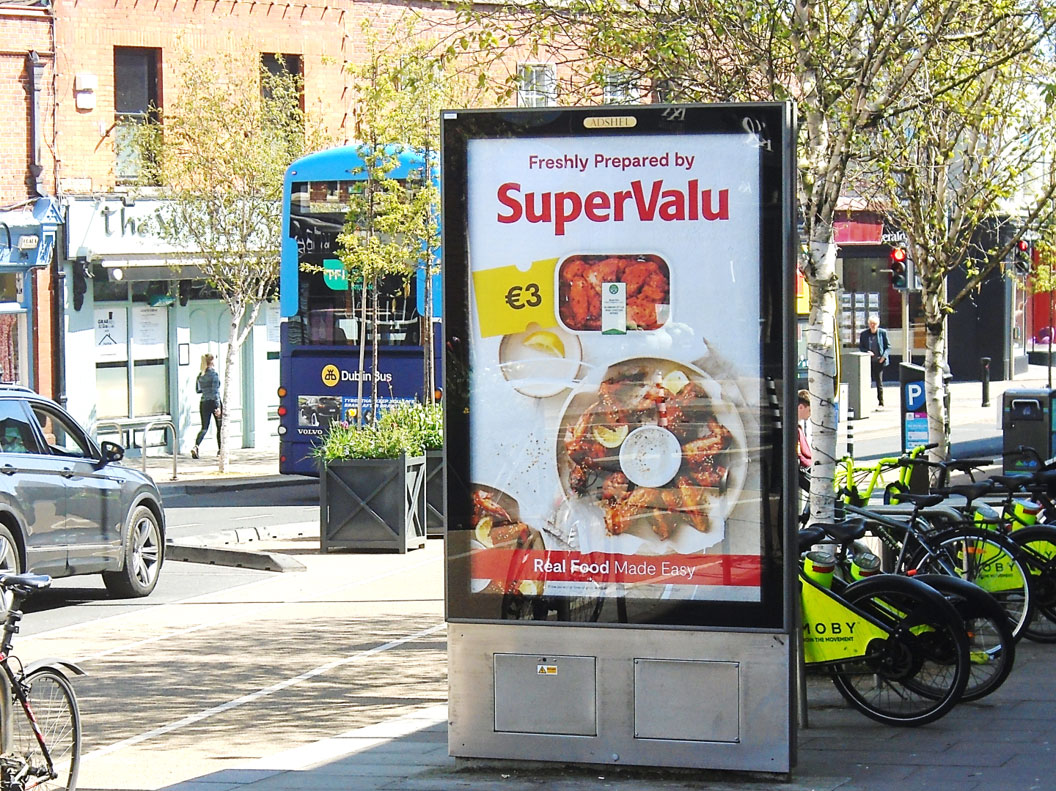 Sales were actually up 18.8% during the period when benchmarked against the same time two years ago, demonstrating people are still filling their trolleys and baskets more than usual.

The data also revealed the reopening of some sectors of society have influenced the sales of certain items with sales of haircare and colourants dropping by 7.4% and 9.4%.

A prevalent trend of the pandemic so far has been the huge drive to support Irish brands with Kantar’s report showing Irish made products and brands are growing faster than imported products. Tayto, Brennans, Avonmore, Denny and Cadbury have performed especially well over the past year.

Looking to the grocery market share, SuperValu continues to hold the largest share at 22.2%. The report outlines how the growth was driven by shoppers frequenting stores more often, resulting in an additional €41 million being spent in the 12-week period.

With a share of 21.6%, Tesco remained the second largest supermarket in Ireland while Dunnes accounted for 21.2% of grocery sales. The growth in both was attributed to attracting new shoppers, with numbers up 25,100 and 28,200 respectively.

Lidl had a 12.8% share of the grocery market as sales increased by 0.7% and was due to shoppers spending an extra €9.1million on branded items.

Hospitality Spend Boost in May

Overall Irish consumer spending rose by 11% in May as the country began to reopen, according to the latest spend report from fintech company Revolut, which they outline bodes well for this month’s easing of hospitality restrictions. 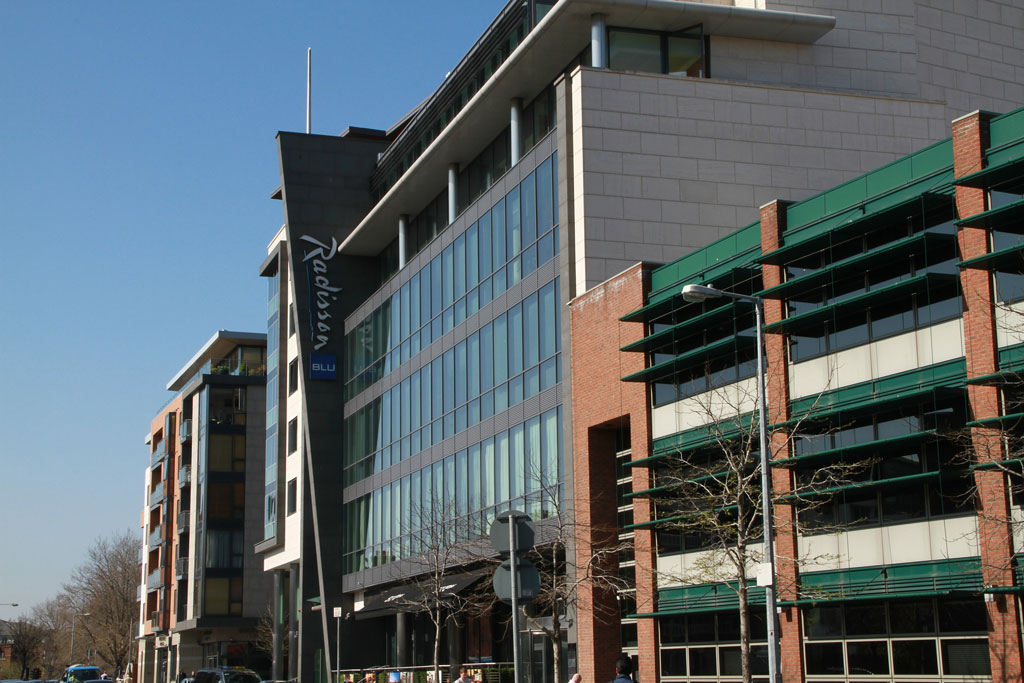 Restaurants and bars saw a significant jump with customers spending 57% more in bars and 20% more in restaurants compared to April.

Retail and other sectors that reopened in May saw a big boost in spend. Clothing stores spend was up 51% month on month. Spending in hairdressers and barbers soared by 466% as people eagerly went to get a fresh cut to rid themselves of the lockdown hairdos.

Mobility increases are evident in the data too with taxi drivers seeing spend increasing by 136%.

Summer and holiday planning was very much on the nations mind in May as the hospitality sector prepared for reopening, hotel spending jumped by 91% while spend on flights rose by 192%.

Revolut noted that spending on flights was higher than average among the 55+ age group, suggesting a “vaccination bounce” in travel and the increase on hotel spending was driven by younger age groups, 18-24-year-olds spend on hotels was up 118% month-on-month, with the 35-44 age group seeing the next highest increase of 90%. 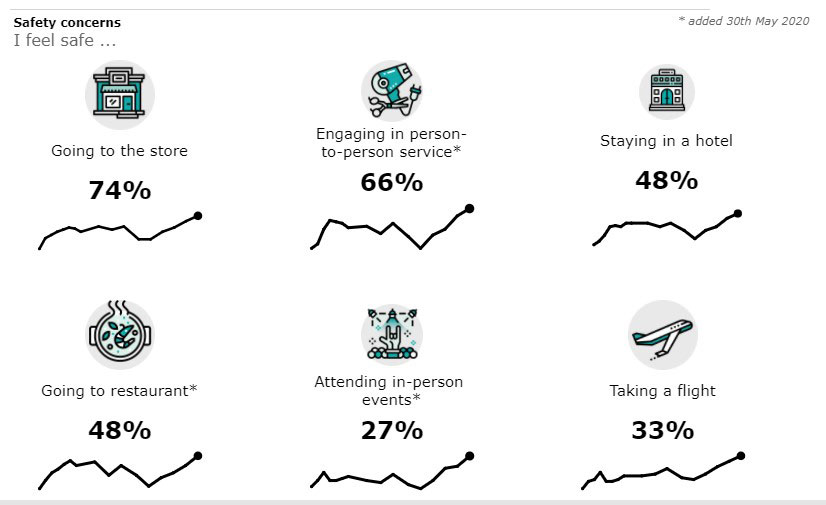 Less than one in four (24%) are concerned about returning to their workplace, down from 38% at the start of February. Following the reopening of all retail and personal services on the 10th May nearly three quarters of respondents (74%) feel safe visiting a store (+22% on February) while two thirds (66%) are comfortable engaging in person-to-person services (+27% on February).

Deloitte’s Global State of the Consumer Tracker captures a continual snapshot of worldwide consumer sentiment. In its latest release it reports that 55% of Irish 18-34s plan to stay in a hotel in the next three months with the same proportion feeling safe doing so. 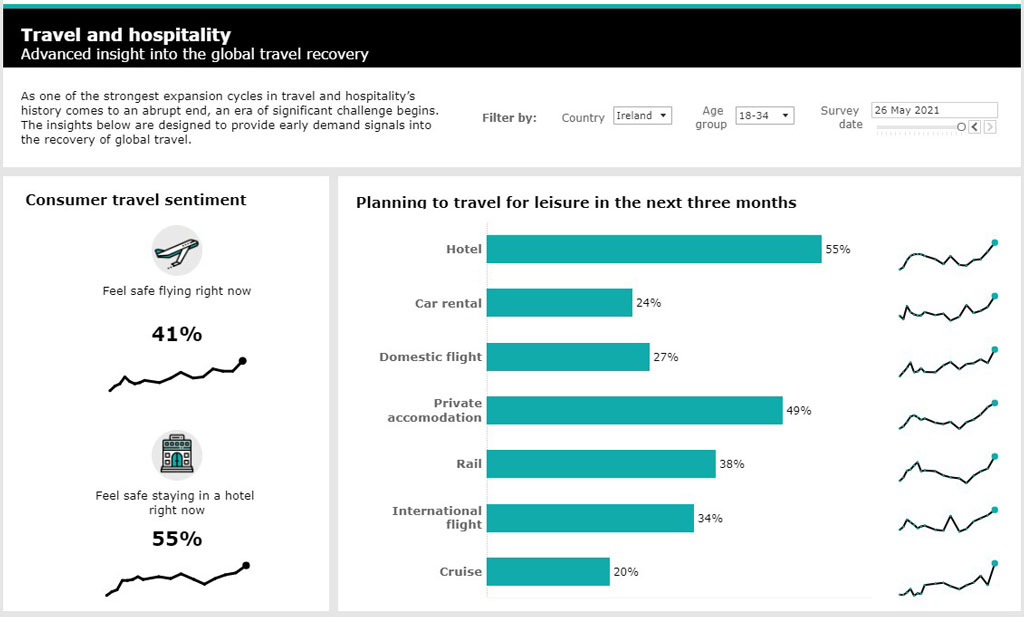 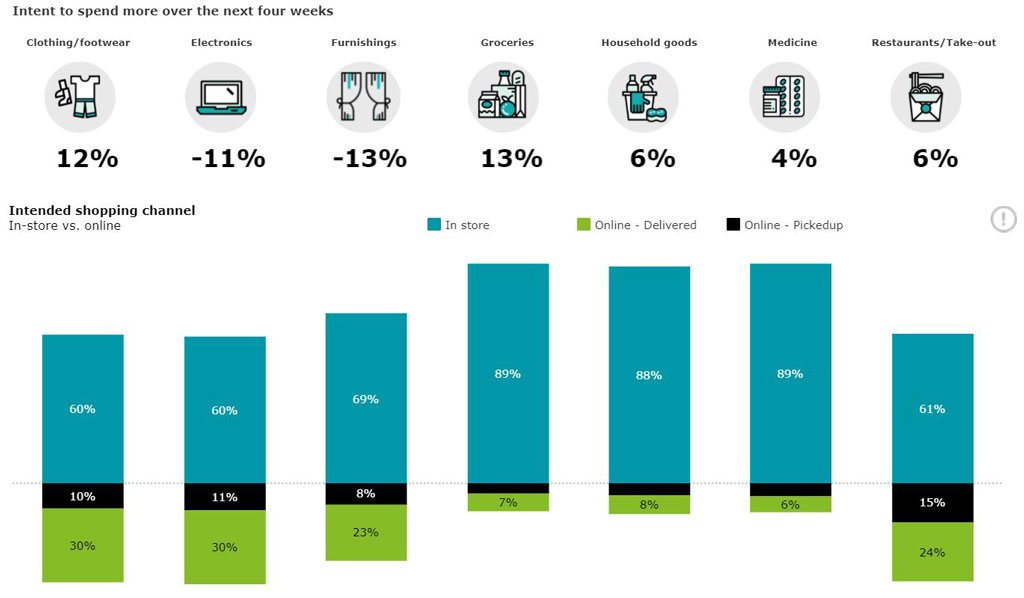 The Deloitte surveys also points to an increase in confidence in terms of public transport use, with those planning to limit use of these facilities dropping from 70%+ in January to 51% last week, its lowest level since the pandemic began. 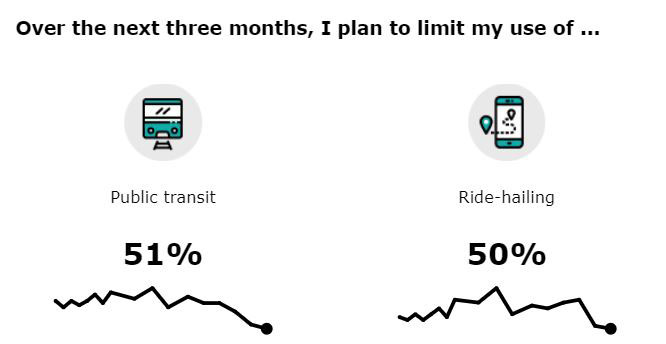 A welcome development in the OOH sector in the UK. A new network of plant-topped ‘Living Roof’ bus shelters – designed to enhance biodiversity – is springing up across Leicester as part of a major programme to replace and revamp the city’s bus stops. 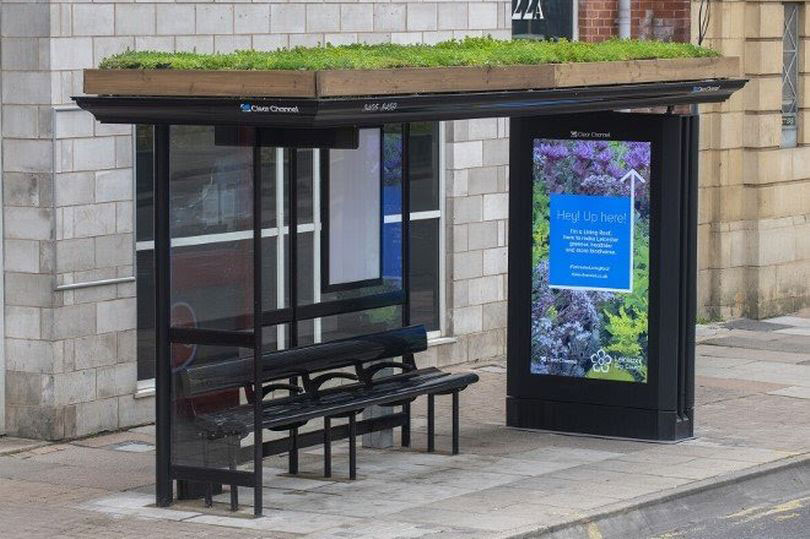 Eagle-eyed Leicester residents will have spotted the first of the Living Roofs – affectionally nicknamed ‘Bee Bus Stops’ – appearing over the last few days. Each is planted with a mix of wildflowers and Sedum plants to help enhance local biodiversity, support dwindling populations of bees, butterflies, and other pollinating insects, and add some extra greenery to the city.