Footfall figures continued to rise across the city centre last week after a busy reopening. Dublin Town released footfall figures for last weekend and reported that almost 400,000 pedestrian movements were recorded in the city on Saturday, as people enjoyed some down time after the working week and took the opportunity to reconnect with the city centre.

The recorded figure was 87% of the number for the equivalent Saturday in 2019. 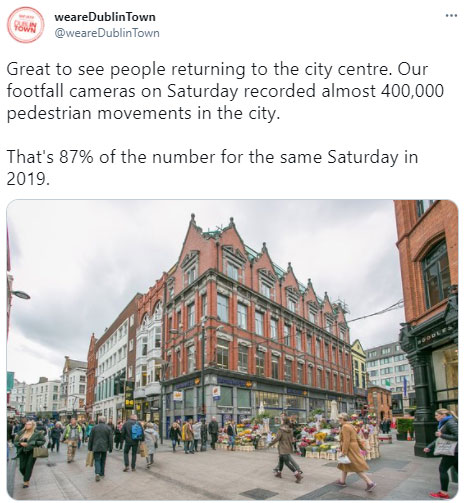 New guidelines were also released this week by Fáilte Ireland detailing the reopening plans ahead of the return of hospitality sector from next week onwards. Outdoor dining is gearing up for its reopening on Monday June 7th and work on the pedestrianisation of several areas, not only in Dublin city centre, but on the outskirts and other cities and towns is well under way as Ireland prepares for its outdoor summer.

As a result, footfall in city centre locations, suburban areas, towns and villages will only further increase as will the dwell time people spend in such locations, providing brands the opportunity to sit with audiences and connect with them as they make their way to these amenities and re-engage in the leisure activities we have so desperately missed. 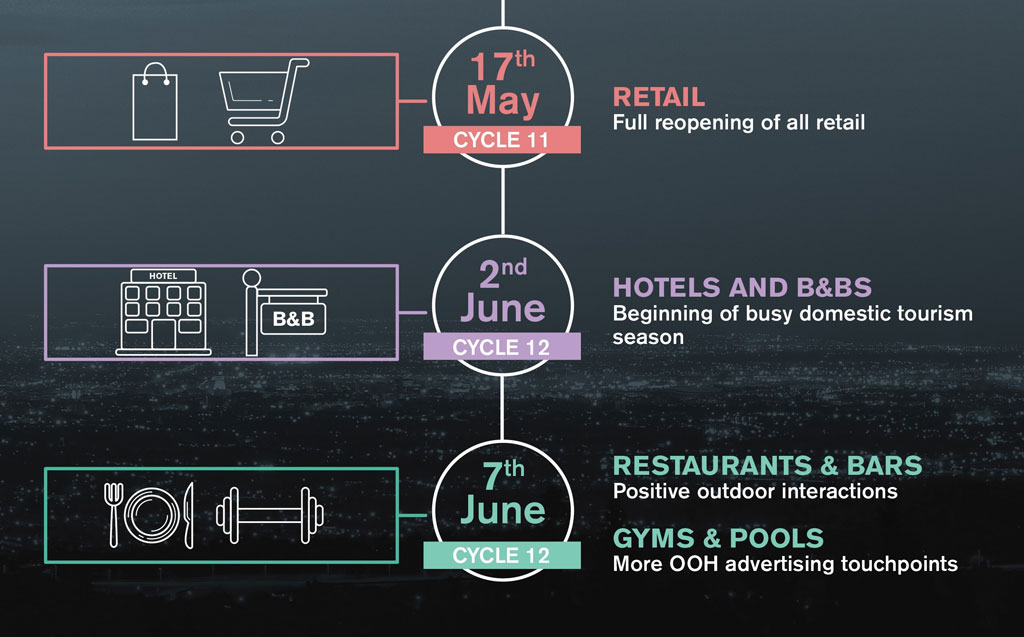 Three separate mobility studies report that road traffic in Ireland are on the brink of, or indeed have already surpassed, pre-pandemic levels. Together they provide a compelling argument for the comprehensive revival of the OOH audience as we enter the summer season and into the second half of the year.

Last week’s national Locomizer mobility data, based on analysis of mobile phone location movements via anonymised app reporting, shows a relative +17% increase on week previous, to 99% of pre-pandemic levels. This constitutes a doubling in mobility the past three months and a relative increase of +51% over the past four weeks. 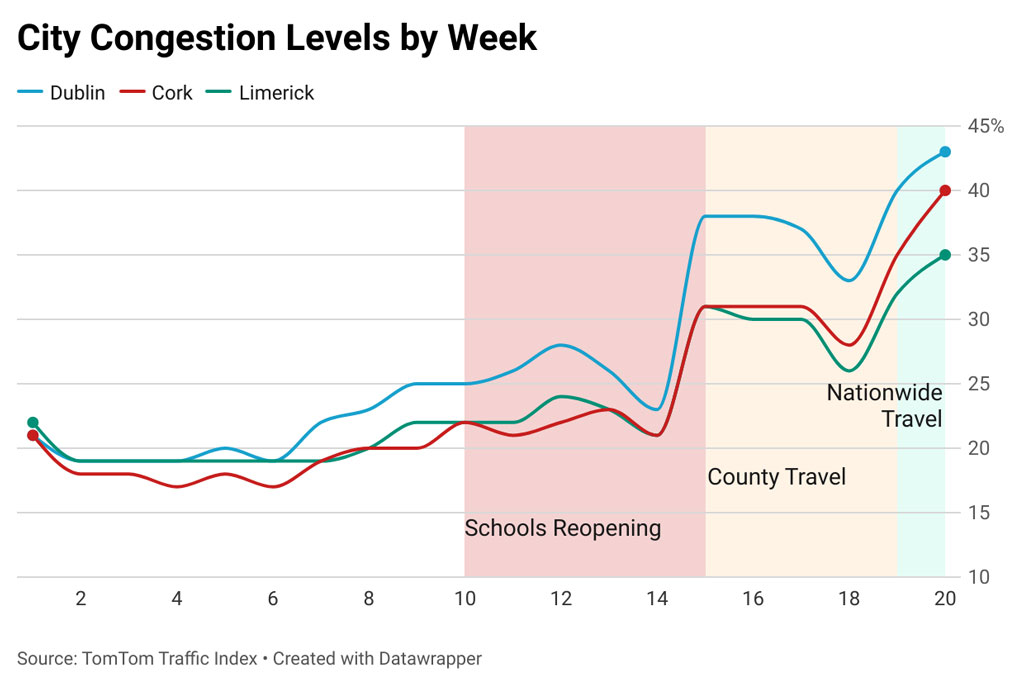 The seven-day average for Apple’s routing requests mobility data to Wednesday 26th May shows traffic surpassing last year’s pre-pandemic baseline reaching 105%. The resumption of inter-county travel and all opening of all retail has resulted traffic mobility being above baseline in 90% of counties. 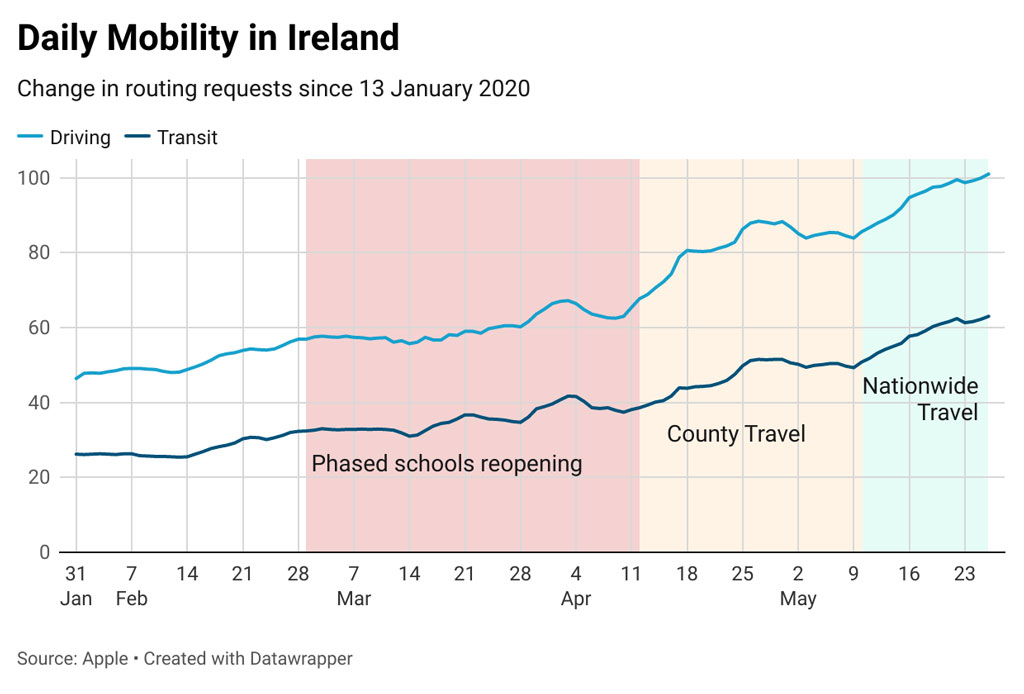 Public transport volumes have more than doubled since March to reach 70% of baseline by Wednesday. Together, the resumption of full timetables, doubling of capacity and reopening of all retail should result in further increases in the coming weeks.

TomTom’s Traffic Index reports that last week’s congestion in Dublin reached yearly highs averaging 43% – up from 26% in March and 33% in April. A similar trend is evident in Cork and Limerick. Last Friday in Dublin was the busiest 24 hours so far this year with a congestion level of 55%. This means that a 30-minute trip during peak hours takes 16.5 minutes longer than it would during uncongested conditions. Afternoon congestion peaked at 87% at both 3pm and 4pm.

To give historical context that is down just 2% on same week in 2019 while in week 19 last year the figure was just 18%. Congestion levels in both Cork and Limerick has now exceeded 2019 levels at +18% and +17% respectively.

A busy cycle 11 in the OOH calendar draws to a close on Sunday and the two week period has seen a step change in mobility and audience for OOH, as highlighted in Now Near Next in recent weeks. Brands have reacted to this change in audience behaviour and a wide variety of advertisers and categories were noticeable on the streets this cycle.

With house viewings possible again the property market is getting back in full swing and EBS are on classic OOH formats, promoting their mortgage offering. A (seriously) impactful billboard campaign for Heinz Mayonnaise is on display, no doubt with an eye to BBQ season. Hunky Dory’s got straight to the point with their roadside 6 Sheet campaign and RTE Radio’s focus was on large format digital in a campaign that showcased presenters and listeners side by side. Carlsberg’s ZerO2 cap campaign was among the POS highlights in cycle 11.

Stepping Out: Dubliners Keen to be Outdoors Again

As restrictions ease and the narrative very much centred on an outdoor summer, our ‘Stepping Out’ research study, conducted by Ipsos MRBI, identifies and establishes what activities consumers are most likely to engage in over the summer months.

In the last instalment of its publication, we look to leisure activities that we will see taking place in the near future.  With pilot events and trials due sometime in June and beyond, Dubliners are anticipating the return of live, indoor and sporting events. 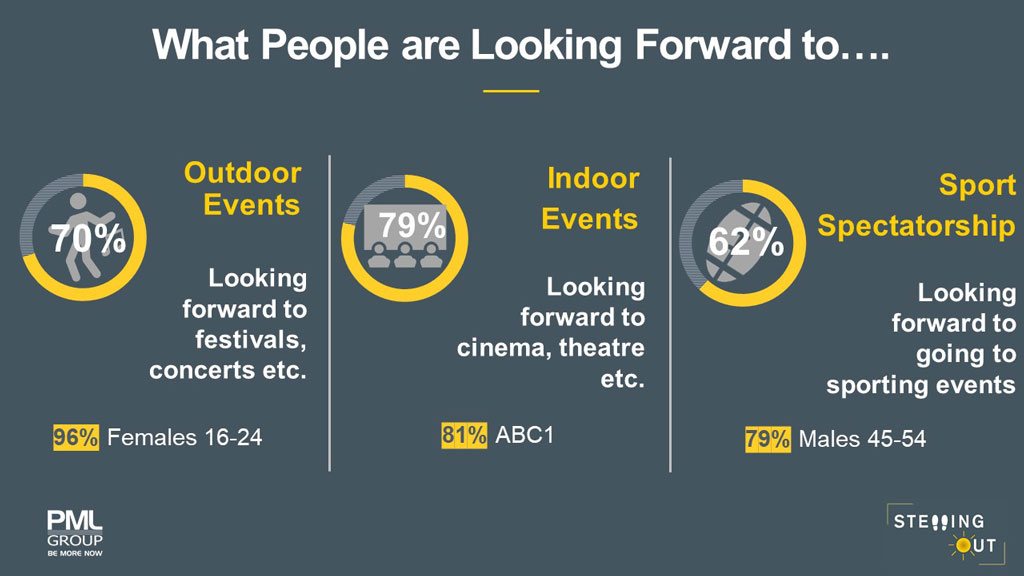 Seven in ten of the Dublin respondents stated they are looking forward to more outdoor entertainment activities such as festivals, concerts and more large-scale outdoor events.

Anticipatory levels rise to 96% for females aged 16-24 while 90% of 45-54 year olds are looking forward to the return of these outdoor entertainment activities.

The preparation for the safe reopening of cinemas and theatres is expected in June. 79% stated they are keen to return to such experiences, peaking at 82% of those aged 25-34 and 81% of ABC1 Dubliners.

In the next reopening phase due be announced today (Friday), it is expected plans for the return of fans to pilot sporting fixtures will be outlined. Almost two thirds of Dublin adults are looking forward to the resumption of sporting events. Males were slightly keener than females for the return, rising to 79% of males 45-54 and 73% for AB males.

The Summer of the Staycation

Almost three quarters of Irish consumers are making holiday plans for this year, that’s according to new research commissioned by the Competition and Consumer Protection Commission (CCPC). 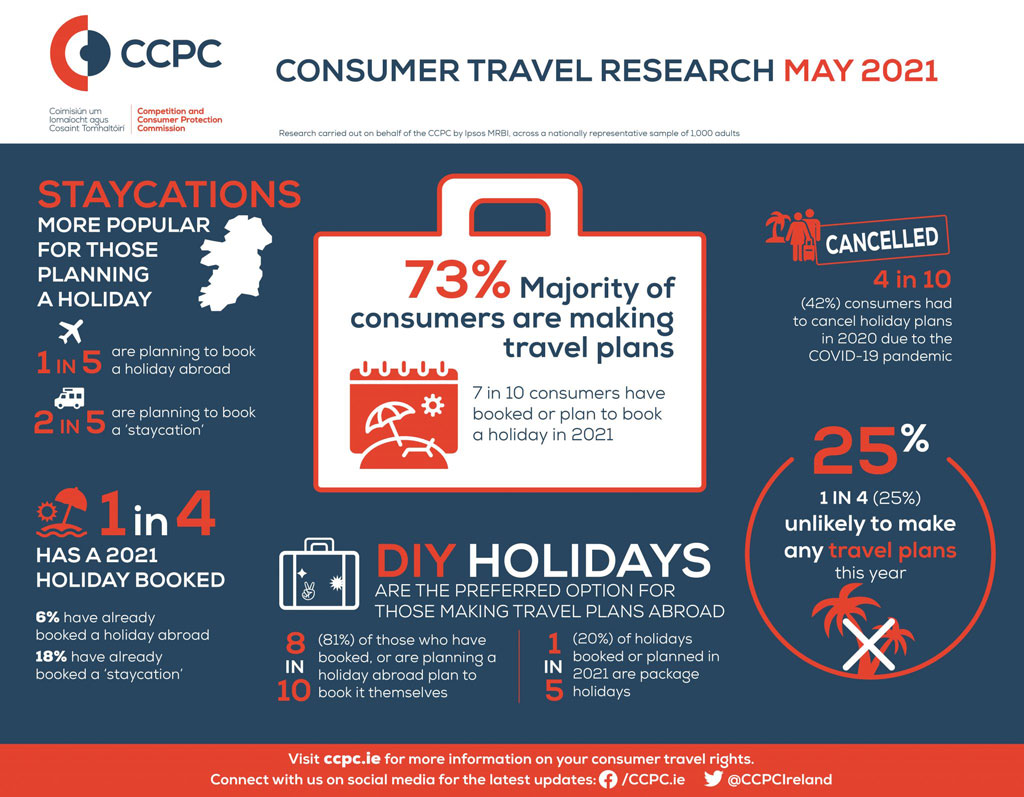 Despite uncertainty surrounding international travel, 1 in 5 (20%) are planning to travel aboard later this year.

The research was carried out on behalf of the CCPC by Ipsos MRBI among a nationally representative sample of 1,000 adults.

Last Friday was a very proud day for our business, with PML Group winning the B2B Marketing category at the AIM Awards. We are delighted that Now Near Next has made such an impact and highlighted OOH’s continued relevance and effectiveness during Ireland’s Covid crisis.  Our thanks to the Marketing Institute and to all who have offered good wishes this week. 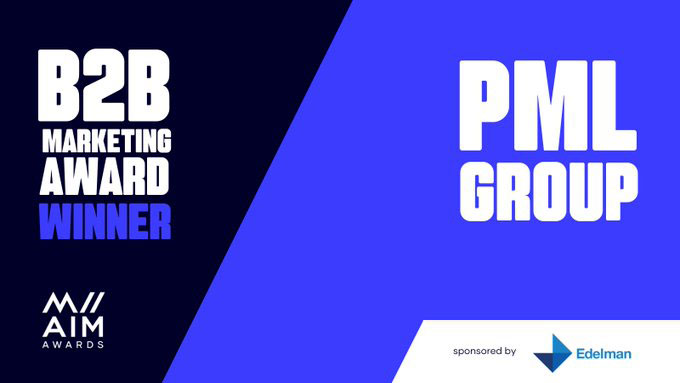