A lot to report on mobility this week. In its weekly briefing, the Department of the Taoiseach has reported from data showing a big jump in people moving around in the last month. Retail and recreation mobility are up 16%, workplace mobility is up 7% and footfall in Dublin city is up 29% – almost 900,000 thousand people. Travel volumes increased in every county. 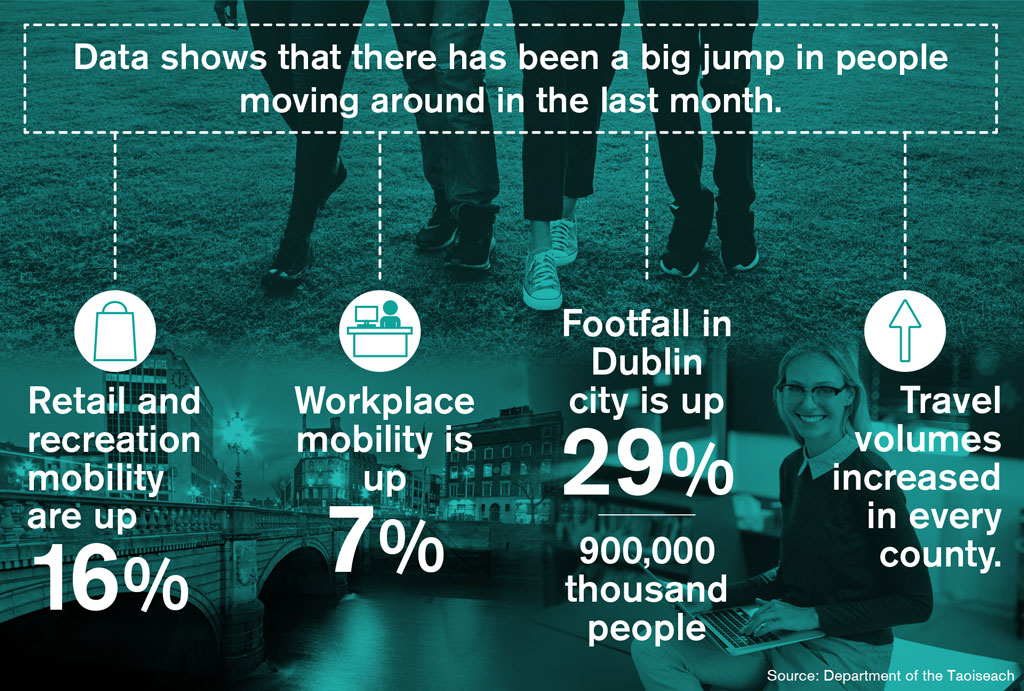 Separately our Locomizer data shows that over the past two weeks national auto and pedestrian mobility has increased by 21% and 37% respectively. TII Daily Car Traffic Levels show a +14% increase overall in volumes over the past fortnight.

Preliminary results from Wave 3 of the ESRI’s Social Activity Measure – which is based on data collected during the week beginning 22 February suggest that mobility and social activity have increased over recent weeks.

There has been an increase in the proportion of the population undertaking journeys outside of the home. The largest increases relate to trips to outdoor locations (parks, beaches, countryside) and visits to other households.

Also this week, the Department of Health and the Health Service Executive have said that the gradual phased reopening of schools can proceed as planned. The next phase of return is next Monday for all primary school children in third to sixth class and fifth years in post-primary schools. 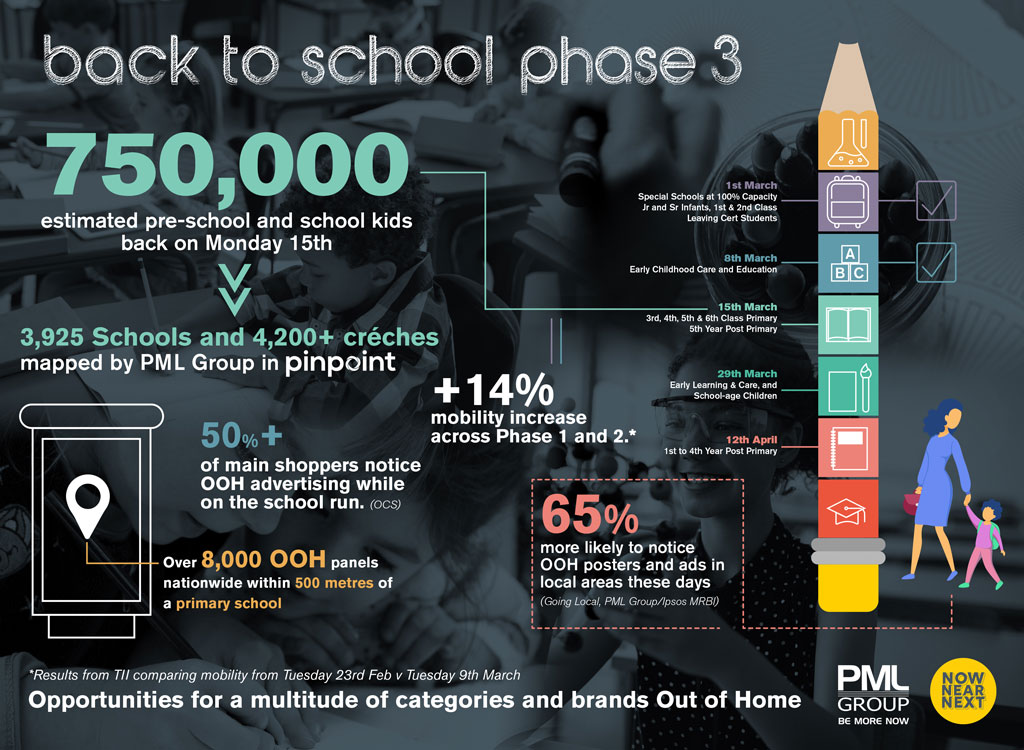 In OOH We Trust

The 2021 Edelman Trust Barometer shows the emergence of health authorities and members of the scientific community as highly trusted leaders amid the Covid-19 pandemic. 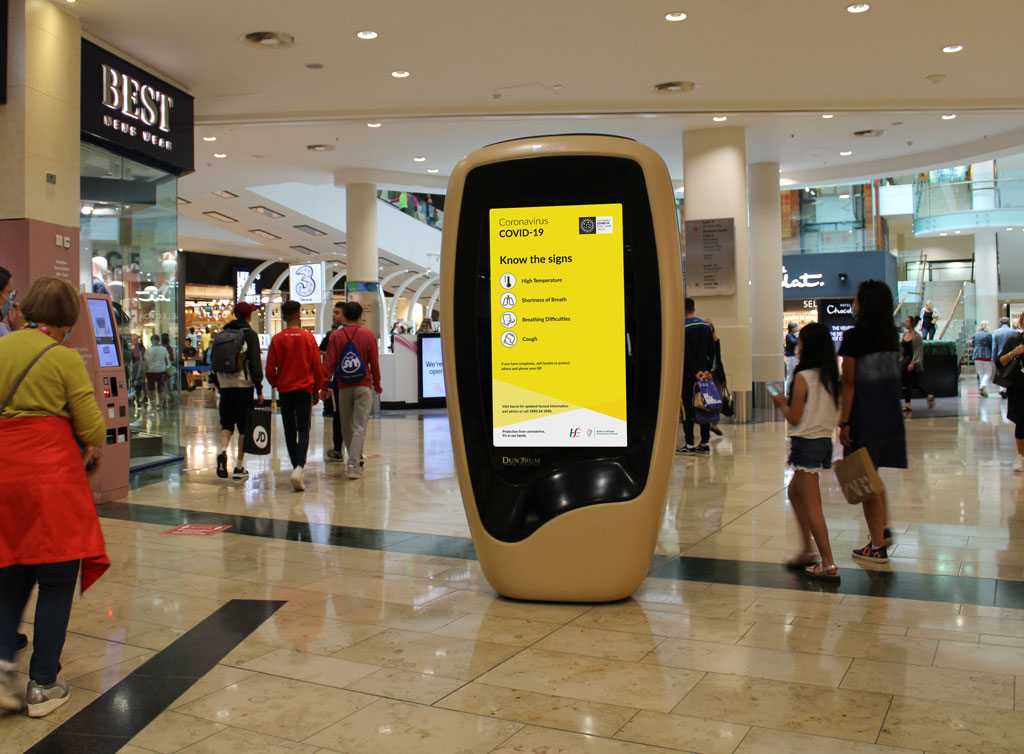 Right from the outbreak of the pandemic, the HSE utilised nationwide OOH to convey the latest information and guidelines to the general public. It was the top recalled campaign last year and subsequently has been awarded winner in the public advisory category in our Poster Impact Awards. OOH is generally consumed in a public forum and conveys trust, familiarity and fame. Our own iQ research has found trust in OOH up at 75% among key demographic groups.

An additional supplemental study also shows that with the vaccine roll-out under way, a significant majority of respondents – 77% – said that they are willing to vaccinate – a 12-point increase since November.

In relation to out of home activities, the Edelman study reports that progress on vaccinations is essential for the return to ‘normal’ life, but doubts remain about activities perceived as higher risk. 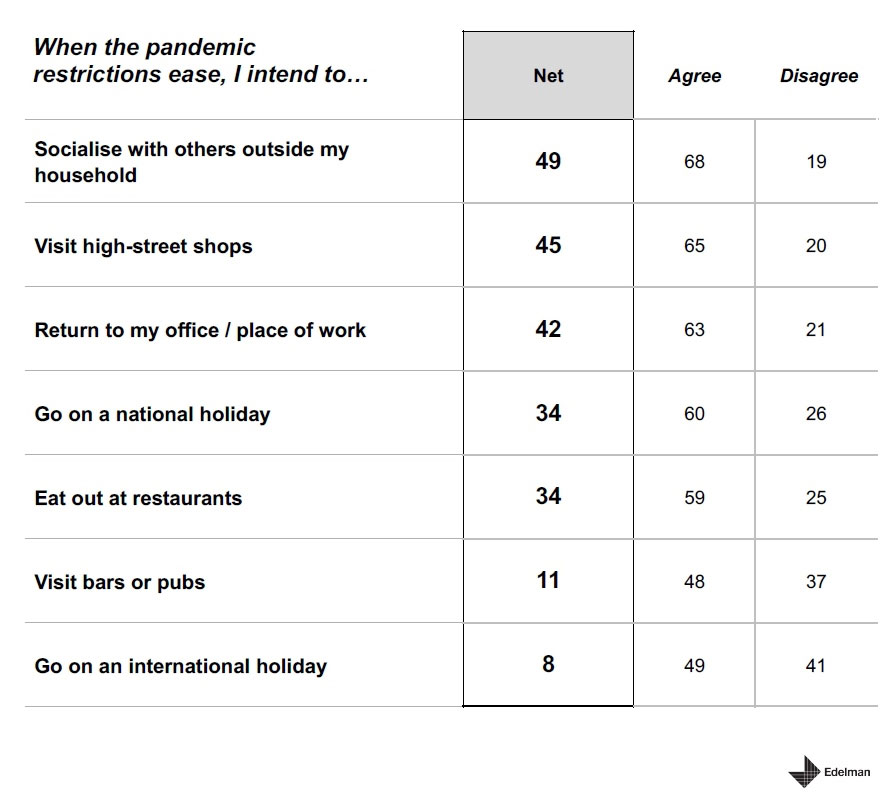 The sample of 501 Irish respondents feel relatively confident with socialising with a wider circle, high street shopping and returning to work once restrictions ease while national holidays look to be more in favour than those abroad.

The latest wave conducted 3rd March finds Irish consumers having decreasing employment and safety concerns over the past month.

An extra €2bn spent on groceries during pandemic year

Take-home grocery sales in Ireland grew by 16.3% in the 12 weeks to February 21st, that’s according to the latest figures released by Kantar. Last month’s growth was even stronger at 17.7%, the highest since November, as shoppers spent an extra €151.1 million.

With two important retail events in the period, shoppers stocked up ahead of Valentine’s Day and Pancake Tuesday with consumers continuing to make the most of such occasions. An additional €3.2 million was spent on boxed chocolates and sales of flour, eggs and syrup all grew.

Kantar also released data for the year in full which showed an extra €2 billion was spent on take-home groceries. The average annual household grocery bill jumped by €1,000 in the past year. 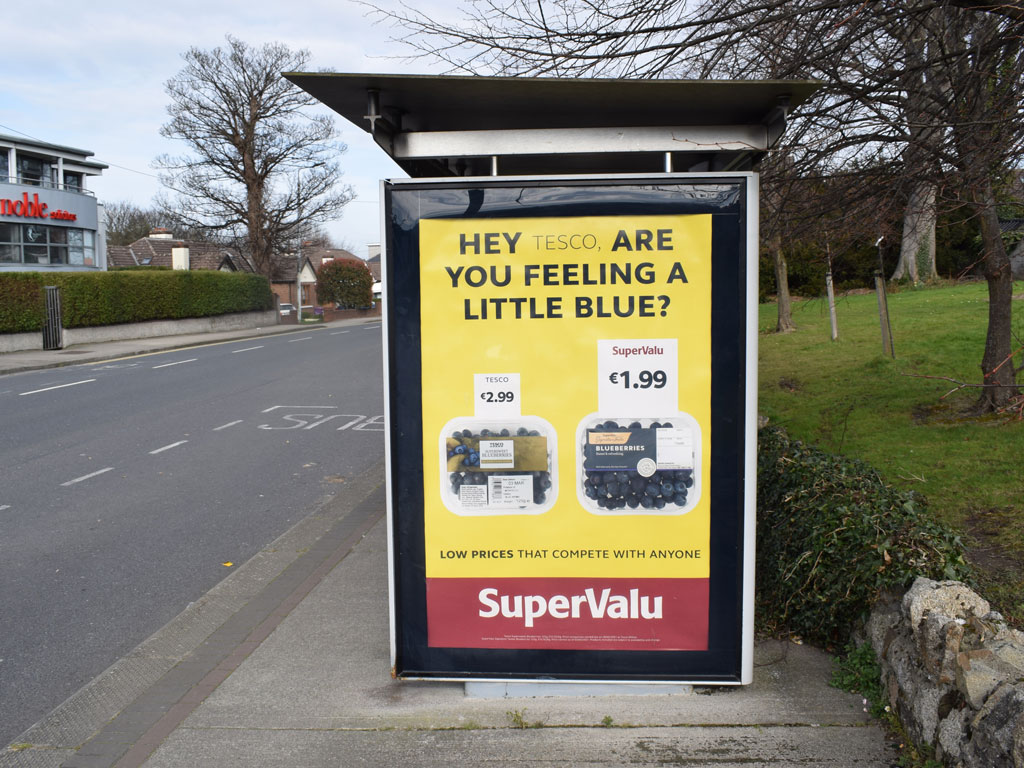 Looking at the latest grocery market share, SuperValu is now the top supermarket, growing sales by 20.9% to take a 22.3% share of the market. Kantar noted it was the only retailer to attract new shoppers to its stores and customers traded up when there with €70 million more spent on branded goods than this time last year.

Dunnes increased its sales by 9.7% as its customers picked up extra items in store and continued to spend more per buyer than at any other retailer at €618.60. This totalled an additional €62.5m spent over the last 12 weeks for a market share of 22.1%.

Tesco shoppers added an additional 3.6 items to their baskets in the 12-week period and helped the grocer’s overall sales to rise by 18%.

Meanwhile, Lidl was once again the fastest growing retailer at 21.8% and basket sizes increasing by 14.9% year on year while Aldi customers spent an additional €57.1 million in the period driving 13.4% growth.

New research conducted by Amárach on behalf of consultancy and training company, Stride, reveals over half (53%) of us are going on a daily walk.

The COVID-19 Walking Survey shows that over two thirds of adults (69%) are walking more often as a result of the pandemic. While most (38%) choose to walk alone, one in four are walking with another member of their family.

And this leisure routine is set to continue with 85% of the respondents saying they will continue walking as an exercise activity after the pandemic. 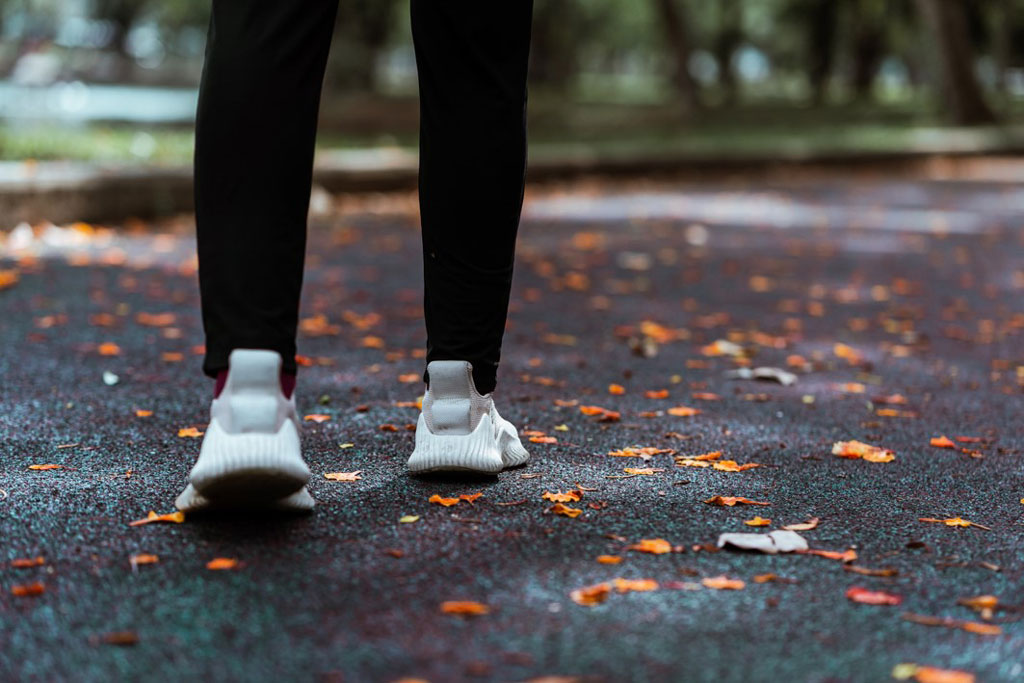 Looking to the reasons why walking has increased in popularity, 79% stated they like to get out into the fresh air. The physical and mental health benefits are also of high importance, with women placing more emphasis on the mental health aspect (69%).

Nearly half indicated that keeping things in perspective was one of the main benefits they received from walking. Dubliners were more inclined to experience joy, gratitude and happiness while out walking at 40%, but nationwide 18-24 year olds experience these feelings the most at 44%. Getting to know places/areas was another main benefit outlined in the results.

With more people out and about on daily walks, exposure to OOH and the frequency in which it is seen intensifies especially in local areas with travel limits still in place. It is also interesting to note the positive mindset people are in when out walking which could contribute to positive sentiment and receptiveness to advertising they pass by.

The survey was conducted with a sample of 2,400 adults weighted to the total population.

You may already be familiar with One Minute Briefs who promote brands & causes via social media by challenging the creative community on Twitter to respond with instinctive ideas to daily advertising briefs & reward the best entries. Our eyes were drawn this week to the winning entry for camper can hire provider Vdubline. All credit to creative Rod Broomfield who so successfully created an aspirational message through ingenious wordplay and imagery. 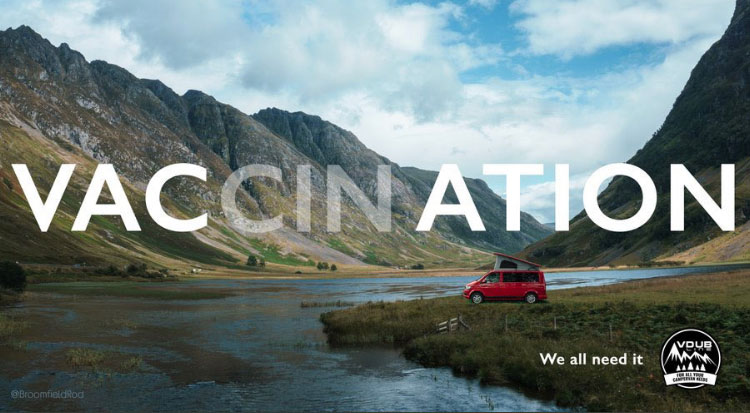