More than 320,000 primary children and Leaving Certificate students returned to their classrooms on Monday morning for the first time since they left them last December. They included more than 260,000 of the country’s junior primary school children, as well as 60,000 Leaving Certificate students. Special schools also moved to full capacity today, having for the previous two weeks welcomed just half of pupils on alternate days. This Monday 8th March will see the resumption of Early Childhood Care and Education.

The impact of this return to school has had a substantial impact on mobility and a comprehensive overview from multiple data sources, below, re-enforces this step change in people’s movement this week.

TII’s latest traffic trend information, generated from a sample of ten traffic counters located on the national road network, reports a +10% weekly increase overall in volumes for Mon-Wed this week. For Wednesday it reported that in general, there are very large week on week increases in traffic volumes as compared with seven days earlier. Although still below the traffic volumes that prevailed prior to the October Level 3 restrictions, car traffic volumes have rebounded significantly in recent weeks. The increase evident was attributed in part to the return of some students to school this week.

Locomizer mobility data is based on analysis of mobile phone location data via anonymised app reporting. Latest figures for Monday 1st March show that the auto mobility level in ROI, which is calculated though a combination of mobile users, time, and signals, rose 12% week on week.

The TomTom Traffic Index provides detailed insights on live and historic road congestion levels in cities around the world. Congestion levels in the three main cities have risen in the past week with Dublin +13%, Cork +12% and Limerick +23% for Mon-Wed.

The Social Activity Measure (SAM) is a behavioural study that records the public response to the risk of Covid-19 infection over time. Designed by the ESRI’s Behavioural Research Unit (BRU), SAM is an anonymous, interactive, online study that surveys people about their recent activity.

This 2nd wave of the study reports results from a nationally representative sample of 1,000 people aged 18 and over who participated in the study on the week beginning 8th February. 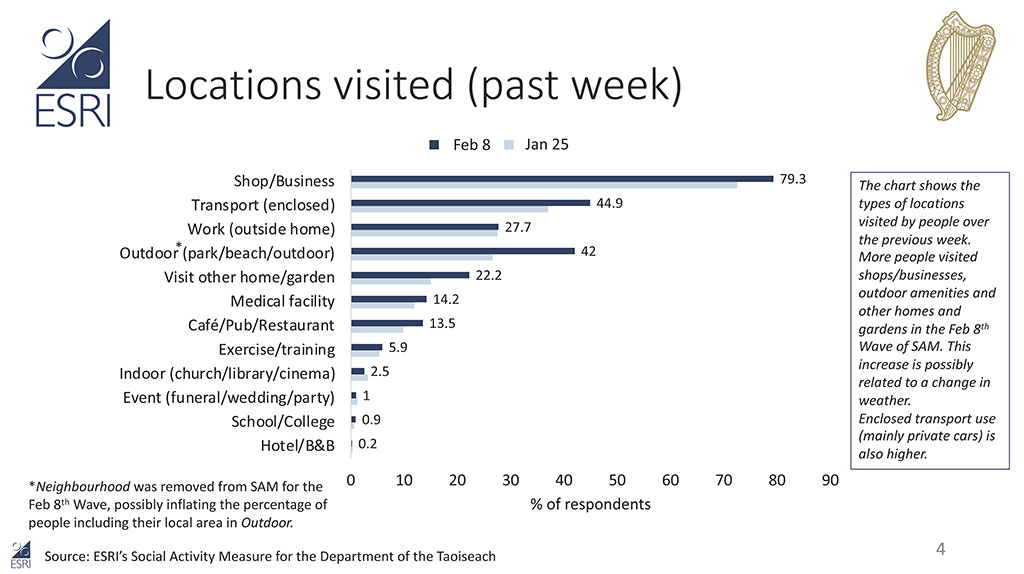 There was an increase in mobility compared to the week beginning 25th January, possibly linked to an improvement in weather. A majority (92%) had left their home over the previous week, with most visiting a shop or business (79%). This represents an increase since the Jan 25th wave (73%), with similar increases in enclosed transport (45% vs. 37%, which includes private cars) and visiting another home or garden (22% vs 15%).

Most people (92%) had left their home over the previous week. A majority (73%) shopped for food and most had walked in their local neighbourhood (53%). 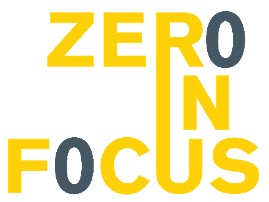 This week we publish the second set of results from our ‘Zero In Focus’ study, which includes data on the role of advertising, perceptions of taste and drivers in choosing ‘NoLo’ beers.  The results below, among all adult respondents, 18-54, show top line outcomes in these areas. 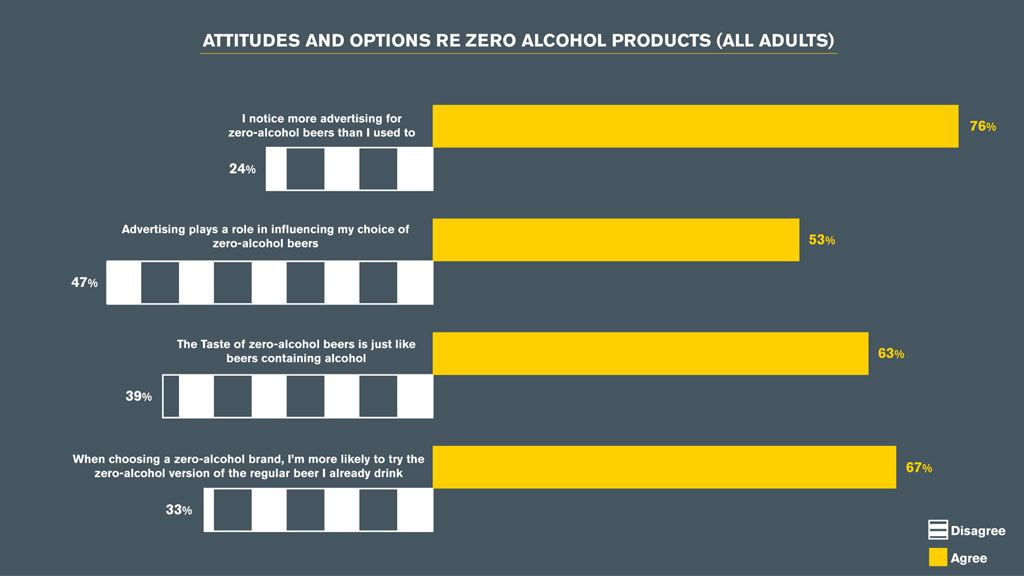 More than 3 in 4 respondents are noticing advertising for zero-alcohol brands to a greater extent now and more than half agree that it plays a role in influencing their choice of such drinks. A slightly bigger percentage of females report noticing advertising for the category more than before – 78% v 74%. This peaks for females at 85% of 35-44s and for males at 80% among 18-24s. Males are more influenced by this advertising (57% v 48%) and this peaks among the 18-24 age group, at 76%.  57% of Tesco customers say they are influenced by advertising for this category, compared to 54% of Dunnes Stores customers and 51% of SuperValu customers.

Two thirds of respondents say they are more likely to try a zero-alcohol version of the brand of beer they already drink. This figure is above 70% for all age groups up to 45+, where it drops considerably, to 51%. The percentage is higher among residents of north Dublin versus south Dublin.

Further details on the ‘Focus on Zero’ study can be obtained by contacting info@pmlgroup.ie

YouGov’s latest report provides insight into international media consumption and behavioural habits during the pandemic. This research provides an invaluable insight into the impact of COVID-19 in Great Britain, the US, and 15 other global markets. 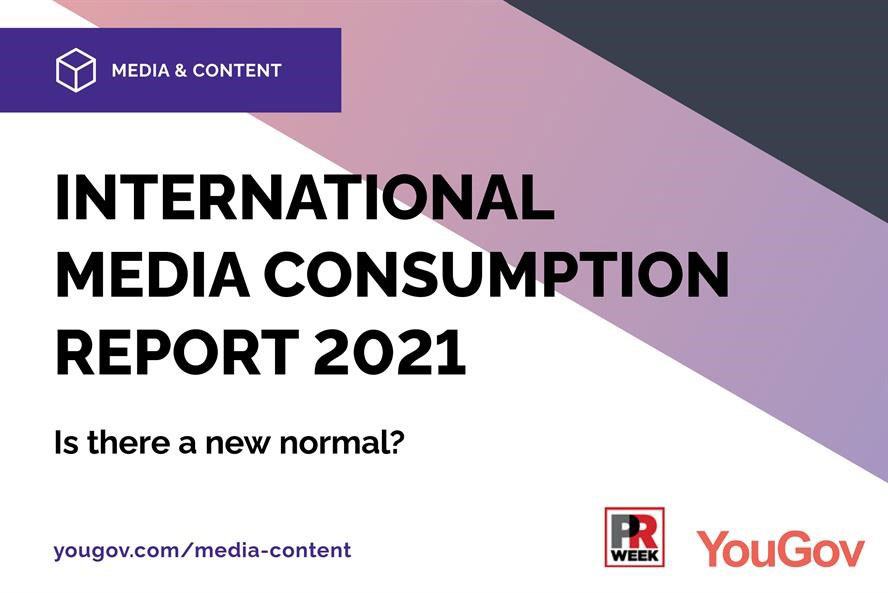 The 2020 figures make for interesting reading – revealing the significant differences within markets and some surprising numbers across them.

Take Outdoor advertising, for example, which many planners and brands may have assumed to be at least partially redundant in 2020. Even in this pandemic year, 33% of consumers say that they have seen a billboard or bus-stop poster in the past week. That suggests that the medium continues to have relevance as part of the broader marketing mix, even if it is possible that consumers are seeing fewer sites and that those sites are closer to home than ever.

Consumption of Outdoor advertising outstrips readership of print magazines and newspapers in most markets, as well as more emerging channels like podcasts (with an average listenership of 13% of all consumers across all markets) or on-demand radio (16%).

The CSO this week published the results of its fifth Social Impact of COVID-19 Survey. One of the primary topics in focus was holiday expectations.

While we might all be eager to step on a plane and venture to a sunnier climate, tighter travel restrictions have placed a pause on oversea holidays again this year.

The CSO report reveals just 16% of people plan on taking a summer holiday abroad this year, this is compares to one in two (50.6%) in November 2020.

With uncertainty still lingering on travelling overseas, the country looks set for another year of staycations.  According to the CSO research, nearly seven in ten (68.8%) intend to take some form of holiday in Ireland this year.

Almost two-fifths of respondents (39.4%) said they intend to take at least a week-long holiday in the Republic of Ireland in 2021. Of those surveyed, respondents aged 35-44 were most likely (45.3%) to take a holiday in Ireland for at least one week.

Families (41.4%) were also most likely to report they intend to take a holiday in Ireland for at least one week. This compares with 39.6% of respondents living in households consisting of at least two adults and 32.4% of those living in single adult households.

As we begin to look to our summer planning, these figures represent a large proportion of the nation who are already looking to staycations this year as opposed to international travel.

With retailers and banks offering customer incentives or rewards such as hotel discounts etc. advertisers in these categories can take advantage of the expected staycation boom by communicating such incentives. It also presents a significant opportunity to those in the tourism sector to highlight their offerings and staycation promotions to an in-market audience.