Big Tech’s stranglehold on audience data and revenues has major implications for society, businesses and indigenous media. Should we sit idly by and let it continue its dominance or should we legislate, asks Peter McPartlin.

Towards the end of January, a public spat broke out between two of the overlords of Big Tech. In his company’s quarterly earnings call with investors, Mark Zuckerberg accused Apple of harming Facebook’s business interests through the planned changes in its operating system which would allow its users more control of their data and ad choices. “Apple has every incentive to use their dominant platform position to interfere with how our apps and other apps work, which they regularly do,” Mark whined. “They say they are doing this to help people, but the moves clearly track their competitive interests.”

In response, Tim Cook of Apple, without naming Facebook directly, strongly condemned platforms that rely on harvesting user data, saying that prioritising engagement above all else leads to misinformation, mistrust, and extremism. “If a business is built on misleading users, on data exploitation, on choices that are no choices at all, then it does not deserve our praise, it deserves reform,” Cook said.  He also made the point that advertising thrived for decades without invading personal privacy.

Hearing two multi-billionaires bitching over apparent abuses of power will cause most people to think “first world problems”, particularly when their bellyaching is very much revenue-related. However, this ‘handbags moment’ amongst Big Tech is noteworthy as it has implications for publishers, regulators and ultimately every one of us who use their services.

I’ve written elsewhere of the torrid time that every media owner had with advertising revenue in 2020. An estimated 13% decline in total Irish adspend was highest at 21% amongst those media who are not part of the Google and Facebook empires.

The Big Tech ad companies had a great pandemic. Every one of them, from Google to Snap and Facebook to Amazon, reported record revenues in the last quarter of 2020 and for the year as a whole. Despite short-term dips in their SME revenue when the pandemic hit and a limited fall-out from an attempted big brand boycott, they made it back in spades thanks to a global consumer obsession with e-commerce and the ad money that flowed from it. It’s probably fair to say that their CEOs won’t be shopping the middle aisle of a German supermarket any time soon.

So why does all this matter, particularly in an Irish context?

Well as we’ve seen before, when Godzilla and King Kong fight, the fall out is generally felt most amongst bystanders who, in this instance, are traditional and digital media companies whose ad revenue stream ends up as collateral damage. Given how much our indigenous media rely on advertising over subscriptions to fund its output, the knock-on effect for journalism, creativity and culture are potentially enormous.

The real battle is shaping up over privacy and control of audience data as digital identity is the crypto currency of digital advertising. Google’s planned elimination of third-party cookies and Apple’s intention to give its users a more overt way to opt-out of ad targeting and data harvesting on its iOS system, could fundamentally reshape the industry. Both are using their dominance of the browser market to close down cookies, which might look nice as a ‘privacy-protection’ play, but it’s likely to be bad news for advertisers and media who compete with Google. It’s also good for other parts of their businesses, in particular, search advertising for Google and the app store which is a major earner for Apple. The UK’s competition regulator has begun an investigation into Google’s move as it has concerns that it “could undermine the ability of publishers to generate revenue and undermine competition in digital advertising, entrenching Google’s market power.”

While cutting off access to third-party cookies may limit Facebook’s ad targeting and measurement capabilities it is still likely to leave three major walled gardens (Facebook, Google and Amazon,) with the high ground in personalised advertising from data that they will continue to mine from their users, i.e., us.

From an analysis of spend across the Irish ad industry, my best estimates suggest that Google and Facebook now take close to 50% of all media revenue in the Republic but over 80% of all digital ad monies. 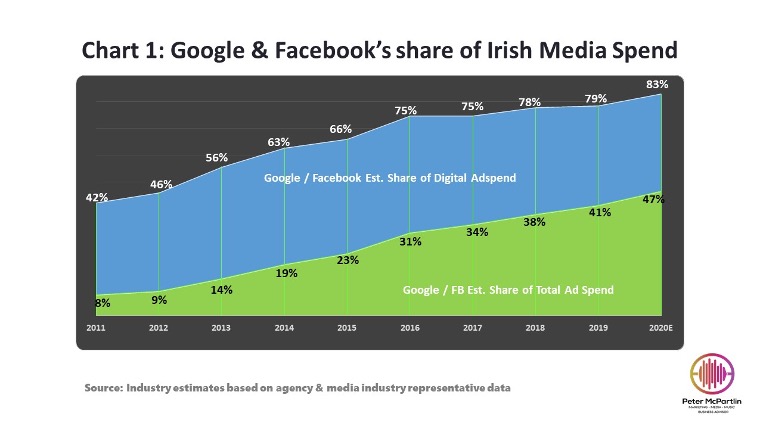 The balance between online media exposure or consumer’s internet time and relative ad investment has tilted strongly in favour of the walled gardens and that’s before Amazon even gets started with its ad sales in the Irish market. 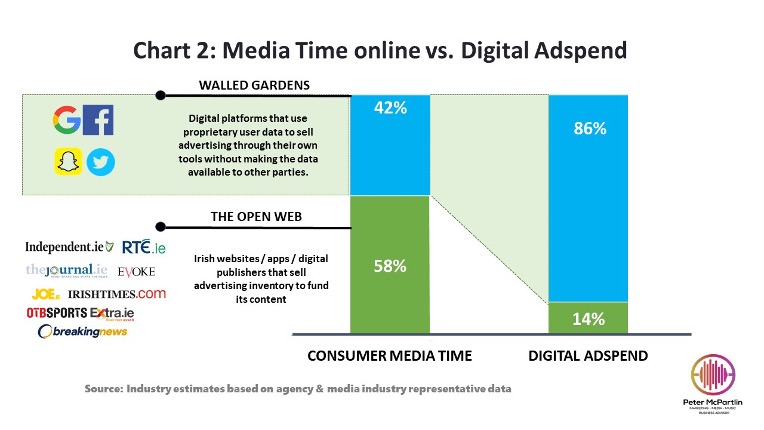 Events over the last eight weeks have really put the dominance of Big Tech under the regulatory spotlight. It began with the Trump social media ban which followed the Capitol insurrection but now the drama is playing out in Australia where the government there have ‘played chicken’ with Google and Facebook to get them to pay for links to news content. And it looks like they are winning.

So, we could be looking at a paradigm shift in the way that social and digital media is treated by legislators, investors and advertisers with many now at an existential crossroads on the harm versus good that they are doing.

But we’ve been here before. Social media’s complicity in the spread of fake news and hate speech causing a host of social, political and personal upheavals with lives being collateral damage, have gone relatively unpunished. Scandals around fraudulent audience numbers and insensitive juxta positioning of ads have had little or no impact on the commercial march of the tech giants.

While there is no doubting the benefits, economic, fiscal and utility wise, that the large digital platforms have brought to individuals, communities and enterprises, one has to question whether this stranglehold on revenue and audience data is a good thing.

As a business sector, are we happy to pay the price of a much poorer indigenous media market, with less diversity and reduced commercial choice, in return for shiny new toys, more sophisticated targeting and a supposed better ROI?

As a country, are we comfortable allowing public-service media and its associated content which supports our culture, character and language, to be drip-fed State-funding and eventually wither over time?

And as individuals, do we really care if a couple of billionaires in the Bay Area harvest our data and fail to take real responsibility for activity on their platforms in exchange for shedloads of information on tap, free messaging and the dopamine rush we get from social media likes?

Or should we be calling for our own legislators to display the ‘cojones’ of their counterparts in Australia, and get Big Tech to pay its way here too?

Peter McPartlin is a co-founder of The Indie List and a former CEO of Today FM and MediaCom.