A common refrain in recent weeks and months is how Christmas will be different this year. That will unfortunately have to be the case in so many households across the country during the week itself but one thing that hasn’t changed this year is the relative increase in traffic on the roads in December. The sources we are sharing in this week’s Now Near Next (Locomizer, TII and TomTom) all indicate increases in volume and congestion as we enter the festive season.

We also include new research this week carried out on our behalf by IpsosMRBI that shows trended shopper behavior throughout 2020 and intentions for a post-Covid era. With the lifting of restrictions last week, we also highlight the latest research and news from key OOH environments.

ROI Auto Mobility at 80% of Pre-Covid

Locomizer mobility data is based on analysis of mobile phone location data via anonymised app reporting. Latest figures (w/e 6th December) show that the auto mobility level in ROI, which is calculated though a combination of mobile users, time, and signals, is at 80% of where it was pre-COVID-19 recorded at the end of February.

This represents a significant weekly increase (up 29% on previous week) and the highest level of auto mobility based on this methodology since the final week of September.

The chart below shows the weekly mobility index from the start of March to date, showcasing the effect of the latest restrictions, and also how this compares to mobility during the periods of the pandemic. 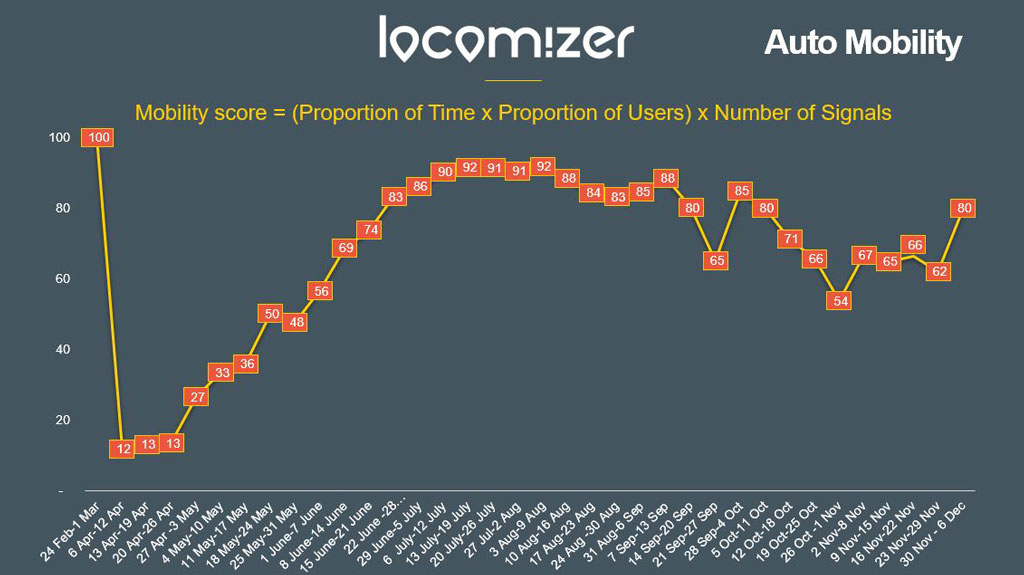 TII’s latest traffic trend information is generated from a sample of ten traffic counters located on the national road network.

A static weekly increase overall in volumes was reported on Wednesday 9th December and stand at 79% of the same day last year. One week on from the lifting of Level 5 restrictions car traffic figures generally continue to show increases in volumes as compared with last week. However, the level of growth is appreciably lower than last week, except for the traffic counter on the N1 at Jonesboro. Overall across a majority of the traffic counters, volumes the morning of December 9th were at or above the levels experienced before the implementation of Level 3 restrictions.

Car traffic volumes on the radial routes into Dublin, generally, show increases as compared with Wednesday of last week. Car traffic is up +1% on the N7 at Citywest, +2% on the M1 at Swords to Airport, -1% on the M11 at Bray and +6% on the M4 at Celbridge-Maynooth. 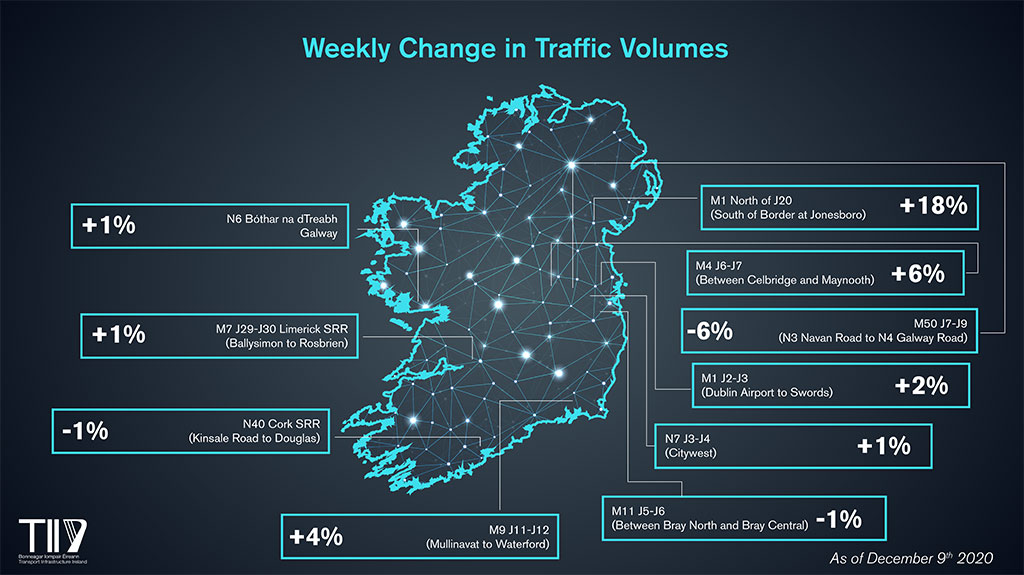 Dublin Congestion Increases 24% in a week

Average weekly congestion figures in Dublin were higher for the week of November 30th – December 6th than for any other week since week commencing March 2nd.  TomTom measured Dublin congestion levels at 41%. A 41% congestion level means that a 30-minute trip will take 41% more time than it would during Dublin’s baseline uncongested conditions. This compares to a level of 33% the week previous and is the highest since the March figure of 51%. The peak for the entire year was week commencing January 20th, at 52%. 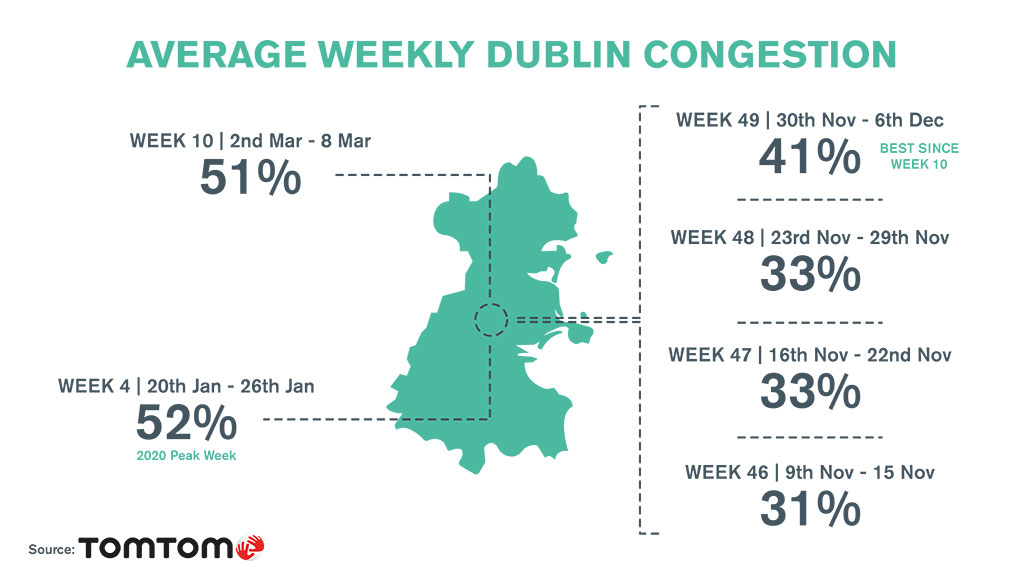 These figures relate to full week averages so percentages will obviously vary by day and time but overall it points to a clear indication of a combination of the lifting of Level 5 restrictions and Christmas traffic leading to much more congested roads in December.

In further evidence of this trend, the DublinLive website used TomTom data on Wednesday evening to report up to 250 traffic jams on local routes across the capital. 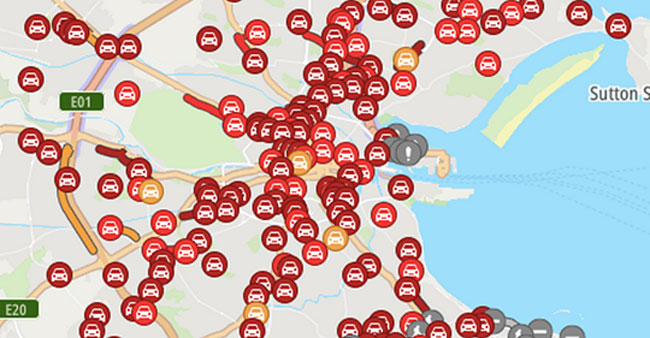 Research carried out on our behalf in recent weeks by IpsosMRBI shows a distinct movement back towards in-store grocery shopping and away from online shopping over the course of the pandemic in Dublin, with the trend set to continue in the post-vaccine era.

The shopping behaviour of 300 Dubliners aged 16-54 across three time periods over the past nine months and two more into the future was investigated in an online survey in late November. The chart below highlights the top line all adult findings. In the next few months 82% of respondents intend to carry out all or part of their weekly shopping in a physical outlet, compared to 90% pre-COVID. That figure hit a low of 77% during the initial lockdown in March to May. 56% of the sample intend to conduct all of their grocery shopping in-store over the coming few months. 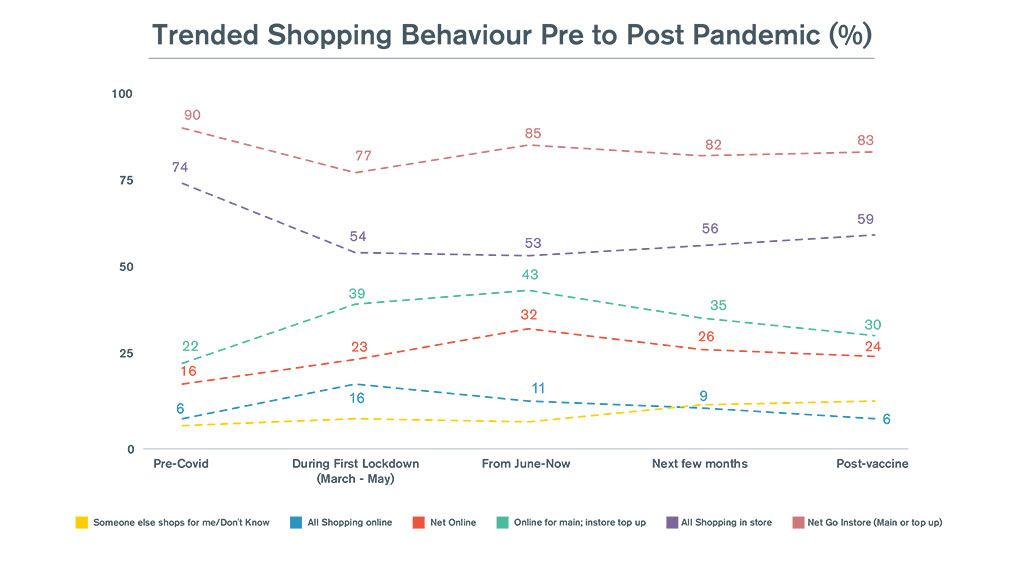 Online only shopping peaked at 16% in March-May and in a post-vaccine world, this will drop to just 6%, according to the stated intentions of the respondents.

Drop us a line at info@pmlgroup.ie if you’re interested is seeing demographic breakdowns.

With online and click and collect services remaining available in the second lockdown, consumer spending was buoyant especially when compared to the spring shutdown which saw it fall by nearly a third.

Toy shop spend was up 73% compared to last year. Spending on electronics was up 45%, while sportswear purchases were up 83%. With essential retail remaining open throughout, only 3% of grocery shopping done by Revolut’s base was completed online.

As we saw in the previous reopening, the physical retail space rebounded quickly. And if sales in Penneys is anything to go by, the return to brick and mortar outlets has been swift. Penneys stores in Ireland broke their daily sales records on two days running after the reopening of non-essential retail outlets.

In other retail news, research from Visa reveals that 76% of consumers will make a conscious effort to shop locally following the relaxing of restrictions last week.  The study found that over half of consumers will do most, if not all, of their shopping with local stores this Christmas.

In a crucial period for retailers and with just two weeks left until Christmas day and post-Christmas sales still to come, retail locations will see an increase in audiences frequenting these environments in the coming weeks.

Due to the large inventory of DOOH sites in city and urban centres, advertisers can capitalise on the pre- Christmas rush and post-Christmas sales period to connect with consumers. One of DOOH’s biggest strengths is its flexibility and advertisers can avail of quick turnaround times on bookings, with day part or even daily display accessible. 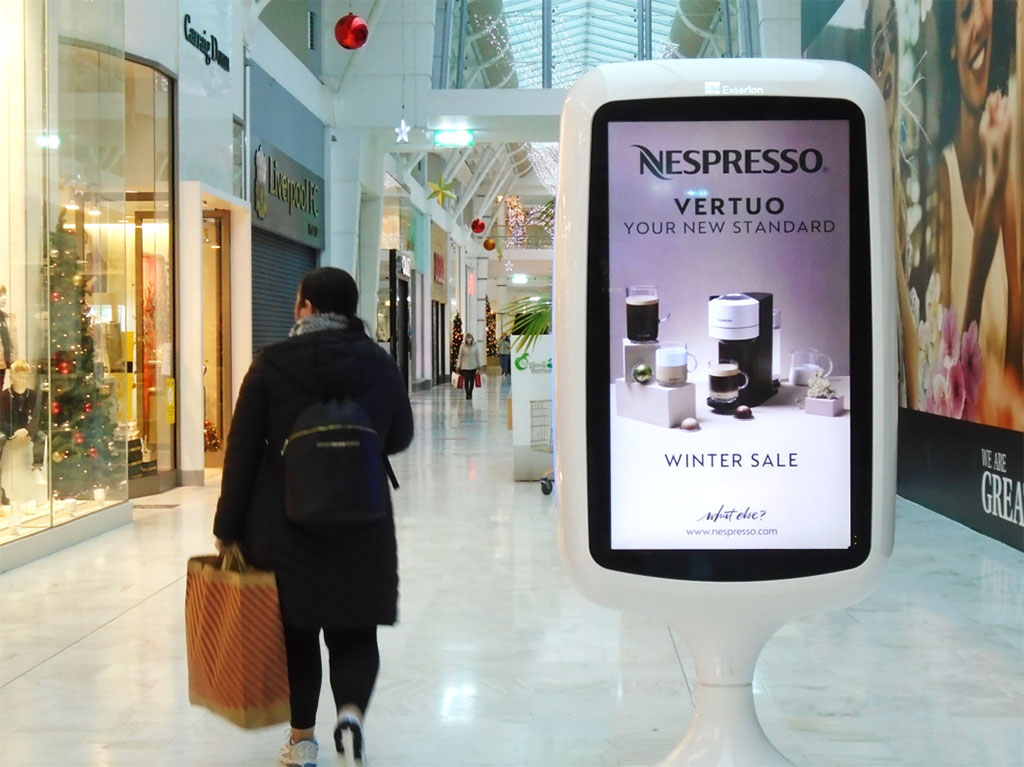 Cheers to the Christmas Spirit

The analysis shows whiskey sales were up 80% and cream liqueurs grew by a staggering 200% compared to the same period last year. 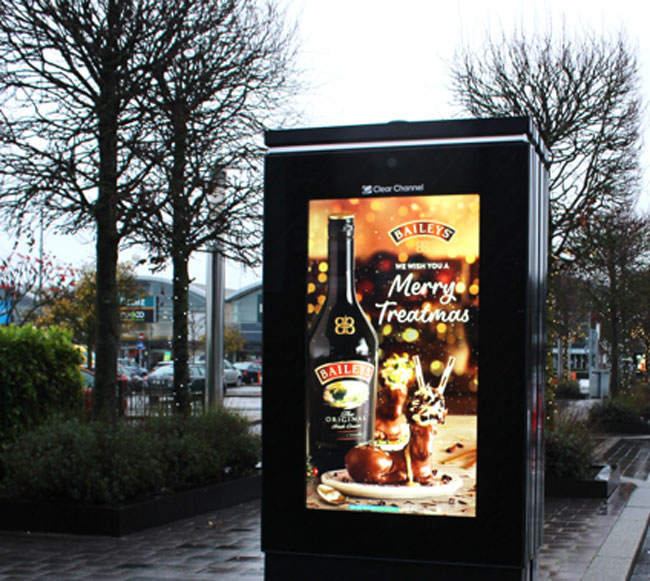 In the latest eight-week period to the 22nd of November, champagne and sparkling wine sales grew by 44% with table wine sales up 25%.

Looking at sales in the first four weeks of lockdown 2 (Nov 1st to Nov 22nd), beer, wine and spirit sales were up 35%.  As a result, alcohol was considered the biggest contributor to market value growth in the 12-week period with sales values up by 27%.

A Return to the Silver Screen

It was good news for movie goers last week as the silver screen reopened for viewing.

In Wide Eye Media’s 2nd wave of ‘Return to Cinema’ research conducted in October, they found 79% plan to visit the cinema more frequently, or the same amount, as before. A quarter of the respondents had returned to the cinema since they reopened at the end of June and over half plan to visit at least once a month. Dwell time will also increase as more than a third intend to arrive earlier than they would previously have done. 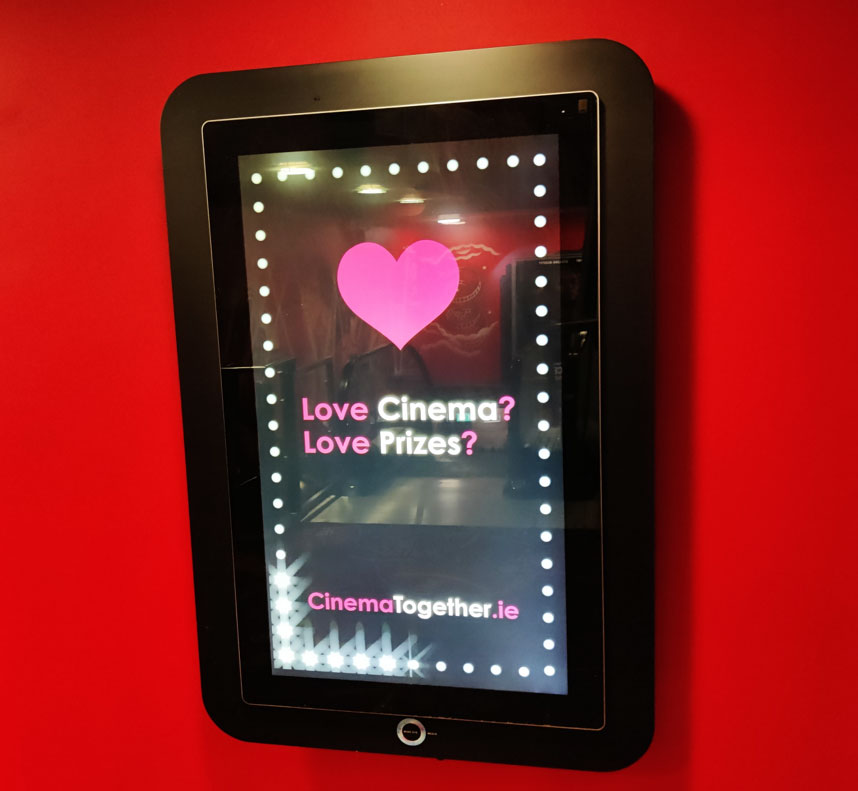 Wide Eye Media’s CinemaTogether initiative also highlighted the jam-packed schedule with new releases and classic favourites showing across the country this month. Wonder Woman 1984 is due to hit screens on 16th December while seasonal favourites like Harry Potter, Die Hard, Bad Santa 2, Gremlins and Elf will be shown.

With cinemas reopening, it is also good news for advertisers with OOH networks located in the environment now available.  Cinema is an OOH leisure environment with powerful digital and classic formats serving many sought after demographics. Likewise, digital screens in shopping malls can also target cinema goers at these locations. They are also an effective way of promoting films to a receptive audience.

Alongside cinema, other leisure and hospitality venues such as gyms, restaurants and gastro pubs reopened last week which again expands the OOH opportunities available to advertisers.

According to research published by Sport Ireland, four out of five adults have made physical activity part of their weekly routine.  The research conducted by Ipsos MRBI, on behalf of Sport Ireland, is the third and final volume of a report examining the impact of COVID-19 restrictions on sport and recreational walking between March and September 2020.

The figure for the number of people walking for recreation remains ahead of 2019 levels at 78%. Compared to 2019 there has also been an increase in the numbers cycling, running and hill walking.

A large majority of the respondents reported that physical activity was more important during these times. One in five adults have taken up a new activity and 90% intend to continue participating in it regularly into the future. 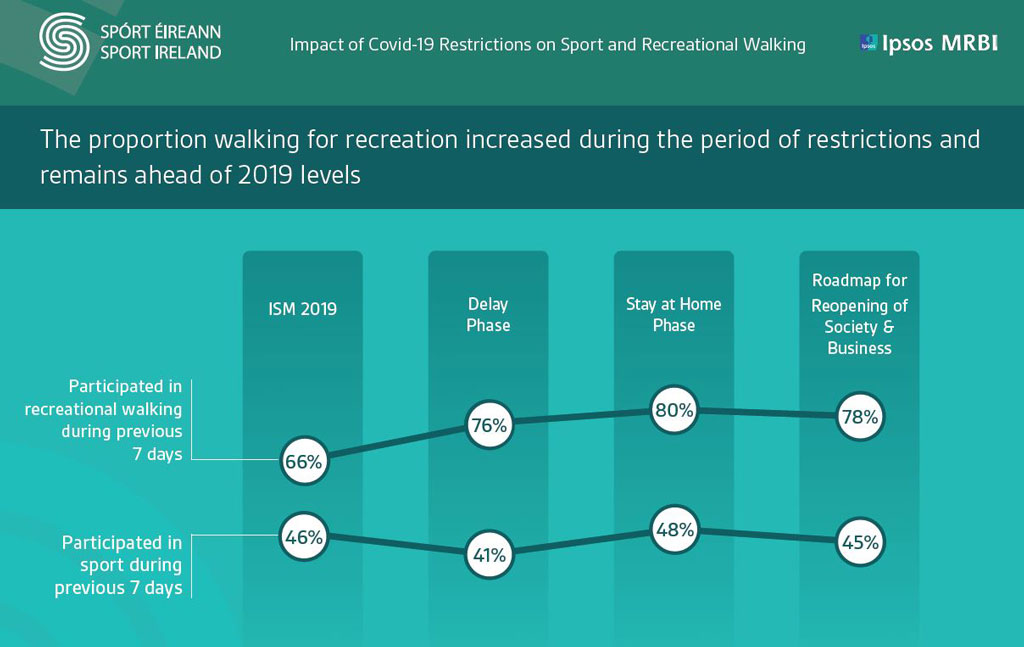 Director of Ethics and Participation in Sport Ireland, Dr. Una May, commented; “As we have all spent more time at home in recent months many of us have rediscovered the importance of regular physical activity and the benefits of being outdoors. This is reflected in the number of people out walking and running and is great to see.”

With the inter-county travel ban set to be lifted on December 18th, myinsightsontime surveyed its panel of parents on their intentions to enjoy a winter staycation. It turns out that lots of parents are looking to get away between now and Easter.

A third of parents said they were determined to get away at some point as it’s been such a stay at home year. Over a quarter are planning to keep an eye out for special deals for family breaks. 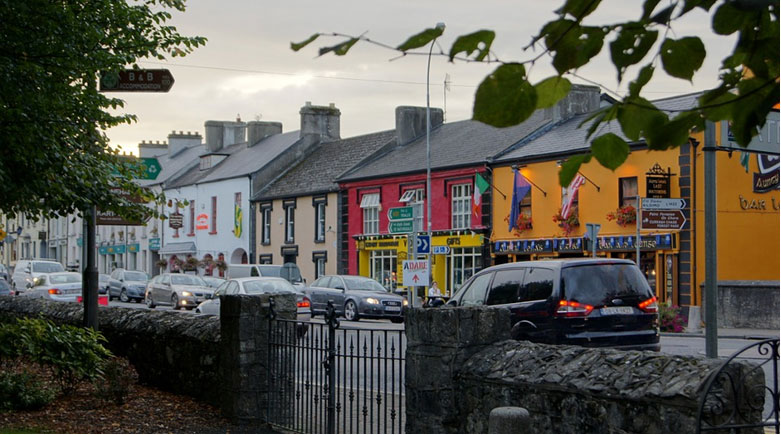 The OOH medium is awash with seasonal campaigns that are spreading some much-needed joy and adding beautifully to the festive landscape.

Bringing some Christmas sparkle to the busy intersection at Dundrum, Bulmers has created an illuminated billboard of its iconic apple tree decorated in Christmas lights.

The innovative special brings to life the Bulmers tree which has been a feature of its seasonal advertising for many years. Earlier in the year Kantar predicted that nostalgia, traditions and culture will play a central role in advertising around Christmas which this campaign really plays to. 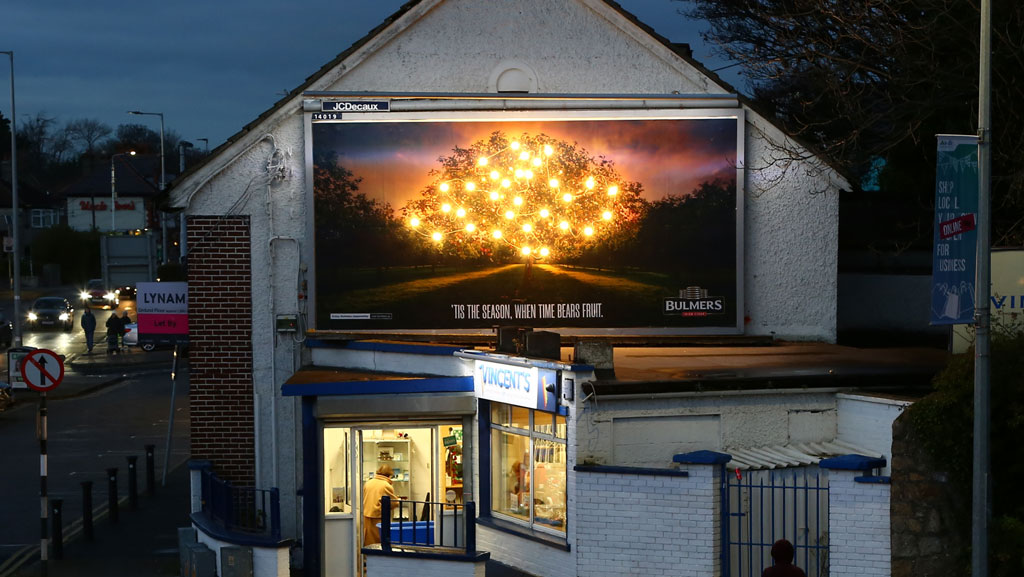 Our own iQ research shows that brands who are innovative with their campaigns are held in higher regard than those who stick to the status quo. For brands that want to be market leaders, innovation in an OOH campaign can be the little bit extra that sets them apart from rivals.