It’s one of the most enduring Irish Christmas ads ever. Now, 17 years since it was first broadcast, David O’Sullivan talks to Mal Stevenson, the creative director behind the iconic Guinness Christmas ad from 2003 which once again graces our screens in 2020.

Noddy Holder and Slade recorded Merry Christmas Everybody, in the Summer of 1973 at New York’s Record Plant, with daily temperatures at a balmy 28 degrees. That December, it was to be their last No.1, but some 47 years later it is still a welcome, if noisy, declaration marking the countdown to Christmas.

The origin of another perennial Christmas No.1, unique to Ireland, began unusually in August 2003, with an unexpected heatwave. As temperatures hit 28 degrees, this was not good news for Guinness, which experienced a significant slump in sales, as parched customers opted for colder and faster dispensed lagers.

Would these customers come back?

The Ad that Keeps on Giving 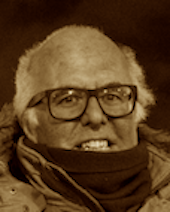 It was this bottom-line impact that required an above the line solution from Mal Stevenson, Creative Director of ad agency Irish International and his team, to help Guinness to reclaim dominance of Ireland’s winter drinks market and “own Christmas.” What was created became the longest running ad in Guinness history and a Christmas gift to Ireland, that just keeps on giving.

Aside from the need to increase sales, brands like Budweiser and Coke had their glitzy, Christmas ads and Guinness, so long an advertising innovator, wanted “something that would last, with stature… something dignified, that would deliver the brand values of Power, Goodness and Communion.”

The theme was enduringly simple and cinematic, as Bing Crosby had already put the idea to music. The underlying concept was developed by Stevenson’s creative duo of art director, Pat Hamill and copywriter, Mark Nutley, known as D’Unbelievables, based on their reputation for producing simple, magical ideas that worked.

“A white Christmas is such a rare thing in Ireland. The whole idea is based on, you go to bed and you wake up in the morning with a blanket of snow and it’s Christmas Day… From childhood we all dream of that, hence we dream of a white one. It was that simple thought, that’s the knub of what we all imagine. Pat and Mark had their finger on the pulse of the people of Ireland,” says Stevenson.

Not a Pint to be Seen

So, all that was required was the authentic and tender direction of Ireland’s role in a short film, but epic home movie, about Guinness and its place in our lives across the four provinces.

“There was never an appetite to show people in bars… Guinness didn’t want a crass, kinda cash in ad. Much to our delight they wanted to give something back,” Stevenson adds.

With a not insignificant cost for 2003 of €750,000, this budget decision was based on “developing a Christmas advert, that might serve its purpose for 2-3 years. For a big production it was a narrow time frame and somewhat last minute. From the brief in September, to concept to completion took three months and involved five days of night shoots, with a crew of 30 across the four or so locations,” he recalls.

“Stuart Douglas, based in London directed it, as he had a background in photography and was known for telling stories visually, as it had little or no dialogue in it. The default position for some directors was to shoot in black and white given the product, but this was an anathema to Guinness, which hated the notion!” he says.

Interestingly, although monochrome in appearance, it was shot entirely in colour on 35mm film stock, rather than digital, which lent a more authentic feel and treatment to the finished product.

“The director insisted on a dark wardrobe deliberately to reinforce the “black stuff and white Christmas story,” Stevenson says.

These included the ‘Man in dark coat and black trilby’ walking his black and white dog, who coincidentally was a late casting, he recalls.

“A guy walking on his own at night, looks a bit strange, so we had to give him a reason to be there. That was our family dog Bilko,”he says.  Bilko was accompanied by a 10 year-old Georgia Stevenson, who was thrilled to be his on-set handler, in her Dad’s night shoot for Ireland’s most iconic Guinness Christmas ad!

“To get Bilko to look up to the sky as the snow start falling, we had a squeaky toy,” Stevenson says.

“He looked up for the first couple of times, but either the camera wasn’t rolling, or was out of focus and he got fed-up. Bilko was kind of, “What kind of eejit d’ya take me for, I know there’s nothing up there!” So Pat Hamill filmed him from up a ladder back at the agency, did a cut-out of his head and then dropped it in!” 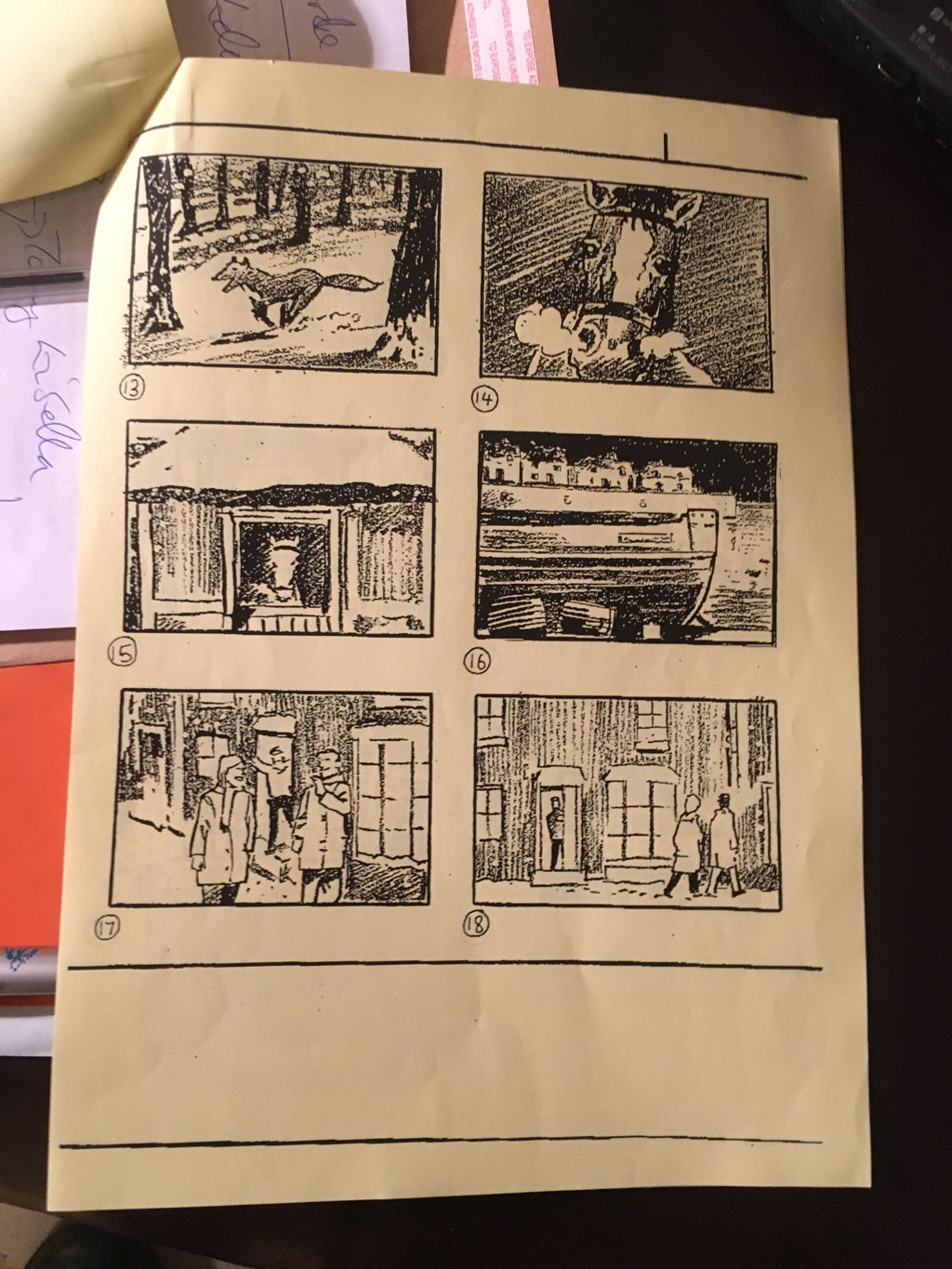 The crew included six special effects people from the wonderfully named ‘Snowbusiness’ company. Chosen for their work on a several Bond Movies, as well as The Shining, where snow was a central  feature, their skill and ability to produce no less than five different kinds of snow, would impress even the most pedantic Inuit onlooker.

“Part of the inspiration was an end scene in a John Huston’s movie of James Joyce’s The Dead which visually features landscapes of Ireland at night in the snow.”

“The O’Connell’s Pub location shoot in Skreen Co. Meath, was chosen for the availability of a stable next door and horse, but it was a nightmare… It just rained and rained and rained, as it incessantly washed away our carefully coiffed snow!”

“Guinness deserve huge credit for not wanting it to be festive and for not wanting it to be product stocked. I mean it must be the only Guinness commercial with no Guinness in it! There’s no pub interiors, there’s no people drinking, but the whole thing feels like Guinness. I mean there’s kind of pints in there… They were kind of subliminal. It wasn’t really ‘find the pint’ but rather wouldn’t it be good if some of the things just naturally had the look of them,” he says.

The no product placement is a boast of sorts, but the presence of evenly fallen snow on various flat, darkened surfaces, is the real Guinness genius behind the ad, be that the Customs House, a country gatepost, stable door, a Claddagh boat, terraced house, or Molly Malone’s cleavage and of course the biggest pint of all, St. James’s Gate itself, the ad’s star and finale.

Stevenson says the ad was originally envisaged without a script and the absence of dialogue but the client wanted some messaging. Compromise was deftly delivered with Mark Nutley’s simplest throwaway line and most Irish of late night farewells, ‘Don’t forget to turn the lights off…’ Mercifully there was no creative appetite to use immersion instead of lights…

So was Guinness happy with the end result?

“Clients generally don’t do happy, but to be fair, their judgement understandably was what the response was like. It ran for a month in 2004 and then the next year and then it gathered this momentum… it had its own life. I mean of all the commercial I’ve worked on, big Irish brands; I’ve worked on Aer Lingus, Barry’s Tea… the one that resonates is the Guinness Christmas ad,” says Stevenson.

“Most ads are supposed to last 4-6 months… I think after five or six years Guinness realised they had a real cracker on their hands,” he adds.

So how does Stevenson feel when he sees it every year? “Well the whole family cries, because of the dog!… who’s long gone. He was a rescue, so we didn’t know how old he was. I think he might have been eight. My wife was worried he wouldn’t last and he’d die before the leaving cert and my daughter would be distraught! So, we see him every year at Christmas and everyone fills up a bit. I think it’s the music for me that does it every time.” 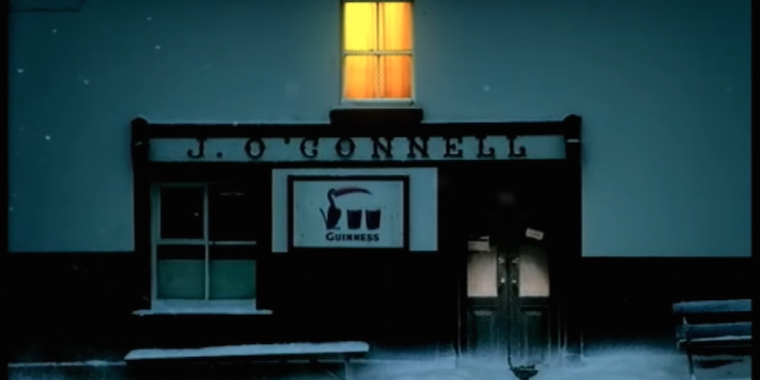 “It was always going to be a story told visually. It’s beautifully photographed, which helps to make it repeatedly watchable. Kevin Sargant composed the music, which is a huge part and has given it a life… it wasn’t a jingle, it had a maturity. It’s almost hymn-like. This was 60 seconds long… the charm lies in how it recognises Christmas as a time of slowing down and taking stock… everybody gets to look back at the year. The film has an unhurried, calm, quality about it,” he says.

Unsurprisingly, Stevenson didn’t know at the time it was going to be a classic that would endure for years.

“Until the finished piece was in front of us, it didn’t occur to me it was going to last. The very fact Guinness allowed reference to its own product in terms like ‘the Black Stuff’ is recognition of a unique relationship that Guinness has with Irish identity and a cultural intimacy with Irish people.

“Funnily enough, because it was only ever shown here, after four or five years, the UK media agency decided to wait until 12th December to run it. There was public indignation and Guinness got scores of phone calls from people asking where’s the Christmas ad? Christmas isn’t Christmas until we see the Guinness ad,” Stevenson concludes.

This 60 seconds of Guinness Christmas loveliness, was brought to you by: