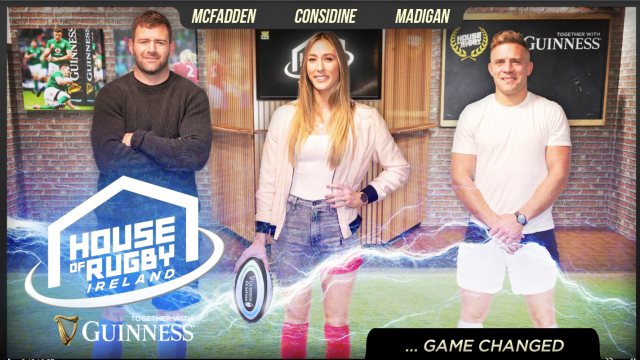 With professional club and international rugby now back in full swing, the popular House of Rugby podcast which is produced by JOE in association with Guinness, is back for a third season.

With close to 15m audio listens and video views to date, House of Rugby kicked off last week last week with a brand new hosting team made up of former Leinster team-mates Fergus McFadden and Ian Madigan as well as Eimear Considine, the current Munster and Irish back who already has 15 caps and two international tries to her name.

Having shared dressing rooms at provincial and international level, the McFadden and Madigan pair have developed a unique rapport from their time in the trenches together and have the stories to reflect it.

The first episode focused on Fergus’ recent retirement and looked back on some of his career highlights as well as Ian’s dramatic, last-gasp penalty that got Ulster to the Guinness Pro14 final and his return to Ireland to hopefully resume his test career.

Sean Cronin also dropped into the studio as the first guest of the new season to discuss his career that started in Munster, took him to Connacht and saw him become a multiple cup-winner with Leinster and Ireland.

According to Paul O’Donoghue executive vice-chairman JOE & Her: “The ‘House of Rugby brand has established itself as the most recognisable and most viewed non-live rugby show in the world. As you can see with the ambition we have shown with our new star cast, new look show and special guests, we intend to build on that success to bring it to the next level. We are excited to see how the new season will be received.”

Anna Sablovscaia, Diageo adds: “The next few weeks promise to be very exciting for rugby fans between the return of ‘House of Rugby’ and of course the Guinness Six Nations. We’re really looking forward to welcoming back some international rugby after such a long time, and of course to hearing from the all new panel of hosts. Let’s hope the coming few weeks give our panel plenty to talk about!”

Featuring a strong line-up of guest interviews including James Lowe, Sene Naoupu, Mike Brown and Rob Kearney, the weekly show,  comes in the form of both a video and audio series that is available on Joe.ie, YouTube as well as podcast platforms.