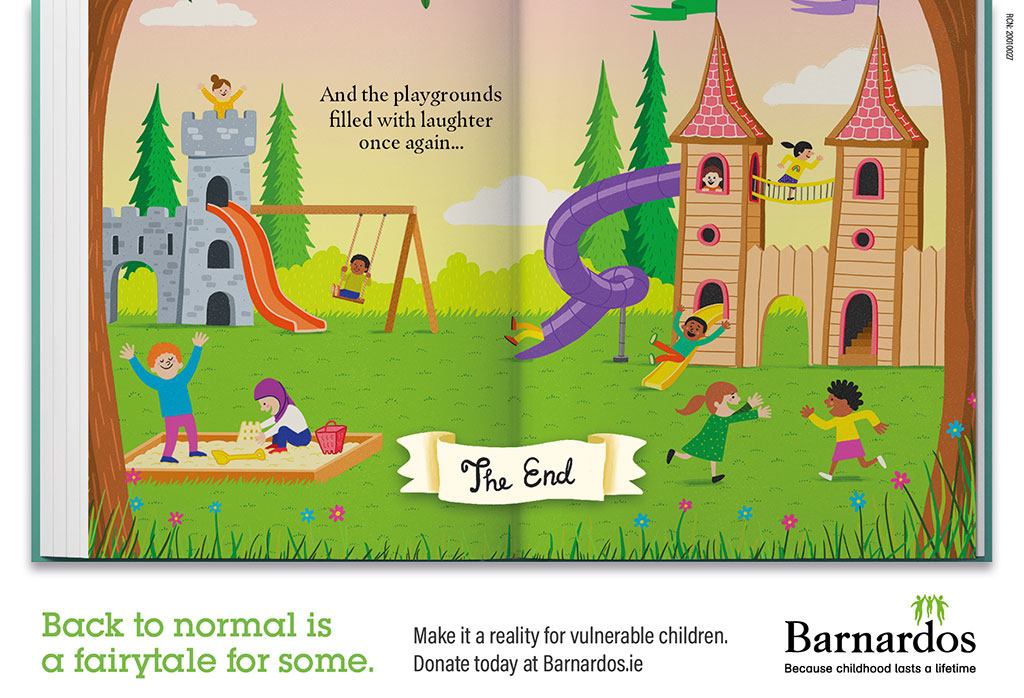 This week Barnardos, Ireland’s leading children’s charity, have launched their national campaign ‘Normal is a fairytale’ to drive much needed donations, as ongoing COVID 19 restrictions have interrupted their usual fundraising efforts.

As the country gets back to some semblance of ‘normality’, this campaign highlights that for some of Ireland’s most vulnerable children, there’s no such thing as back to normal. The focus of the campaign is to drive donations to Barnardos to help with the invaluable work they do to support vulnerable children nationwide.

The aim of the campaign was to highlight Barnardos commitment to giving the most vulnerable children in Ireland a better future. Barnardos knows that childhood lasts a lifetime, and that the children they work with need long-term help and support. There has been a non-stop stream of emergency appeal campaigns during lockdown, so the approach for this campaign was to stand out by focusing on the long-term perspective, and by making a real emotional impact.

The campaign, which includes large-format outdoor, radio and digital, will go live from the 22nd of June. Award winning illustrator Chris Judge provided the illustrations for the campaign. Chris has been a long time collaborator with Barnardos and has added his own unique style of illustration to the outdoor and digital creative for this campaign.

Barnardos Director of Fundraising Mary Gamble said “We have received many generous donations during the Covid-19 pandemic, however to keep providing services to vulnerable children and families,

Barnardos needed to highlight the importance of long term financial support from the public. This campaign really captures the ambition of Barnardos in a way that’s emotionally impactful and thought provoking”.

Jarrod Banadyga, Creative Director, The Public House, added: “As a parent, I think a lot of us are caught up in our own stress of waiting for the playgrounds, creches and schools to open. While that might be the might at the end of the tunnel for many, we wanted a creative way to remind people about those vulnerable children whose struggle will continue.”

Commenting on the campaign, Chris Judge said: “I was so thrilled to be commissioned to work on this illustration with Barnardos in collaboration with The Public House. I have worked on projects with Barnardos over the past 10 years and the work they do for vulnerable children to help them overcome disadvantage, poverty and other negative factors is very close to my heart. During these unprecedented times of Covid 19 there is an even greater need for funding to make sure we can protect the futures of

Ireland’s most vulnerable children. I hope this campaign connects with new donors and this becomes a reality”. The Public House is an independent strategic and creative agency in Dublin, with clients including Jameson, Paddy Power, EPIC: The Irish Emigration Museum, and Independent News & Media. The agency is known for its strategic rigour and creative edge that delivers for its clients, with a philosophy that ‘Boring Doesn’t Sell’.