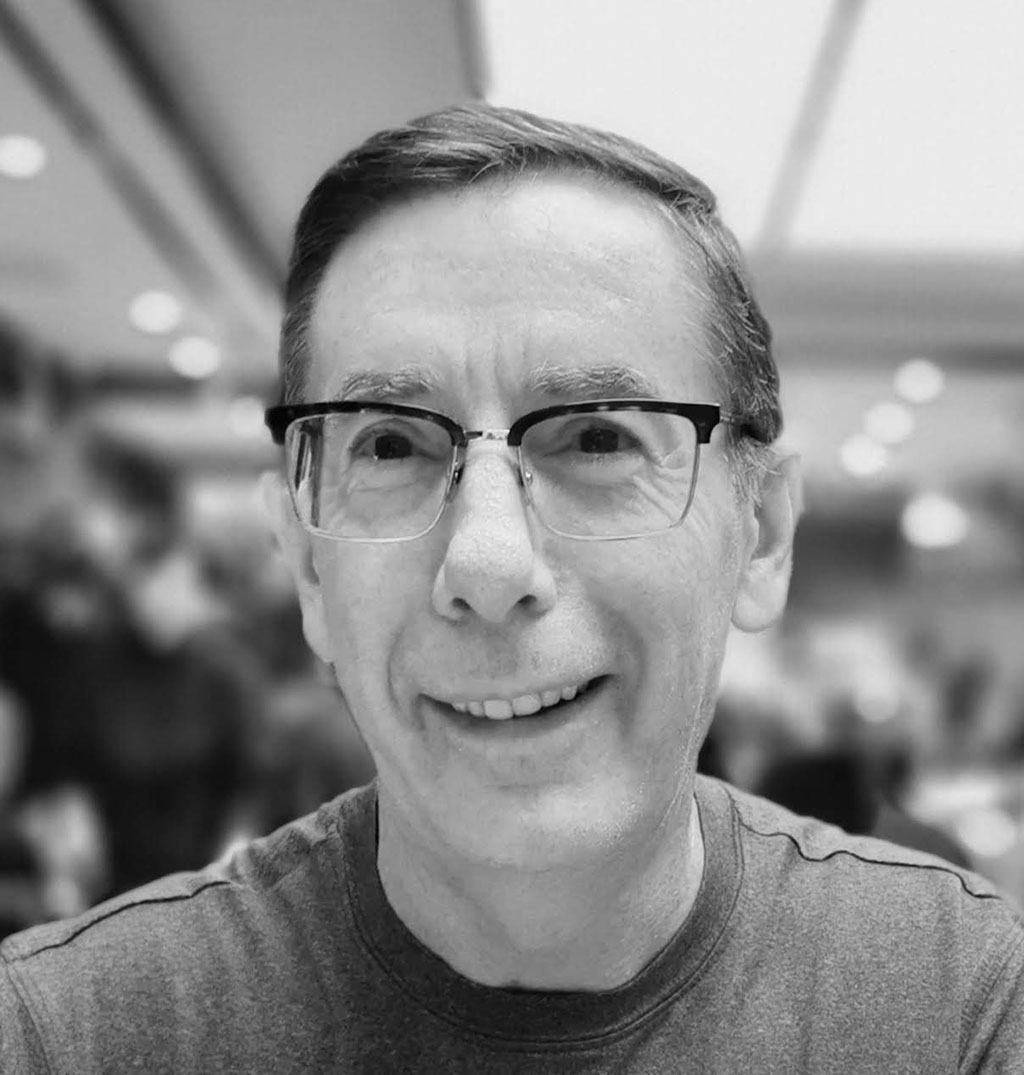 With a new government likely to be formed within a matter of weeks, Peter McPartlin argues that it needs to level the commercial playing field to allow indigenous media companies compete with the likes of Google and Facebook.

Someone famous once said that theatre is society holding a mirror up to itself. The same could be said about a healthy and independent media sector which helps to reflect our positives as well as laying bare our flaws. In that context, the mirror provided now by Irish media is becoming faded and cracked because of the distorted impact that the large digital platforms are having on advertising revenue.

The Covid-19 crisis has had a profoundly negative impact on almost every sector of Irish business. But recent predictions on its likely effect on the Irish media sector are particularly concerning as it means less money for everyone in the new ‘PC’ (Post-Covid) world.

Marketing communications group, Core, have predicted a 30 per cent fall in ad spending this year which would wipe around €370m* from the €1.2bn* that was spent across all media in 2019. This will devastate large swathes of what we’ve come to regard as the mainstream media market and in particular, the channels and publishers that provide most of our indigenous news, current affairs, social and cultural content. 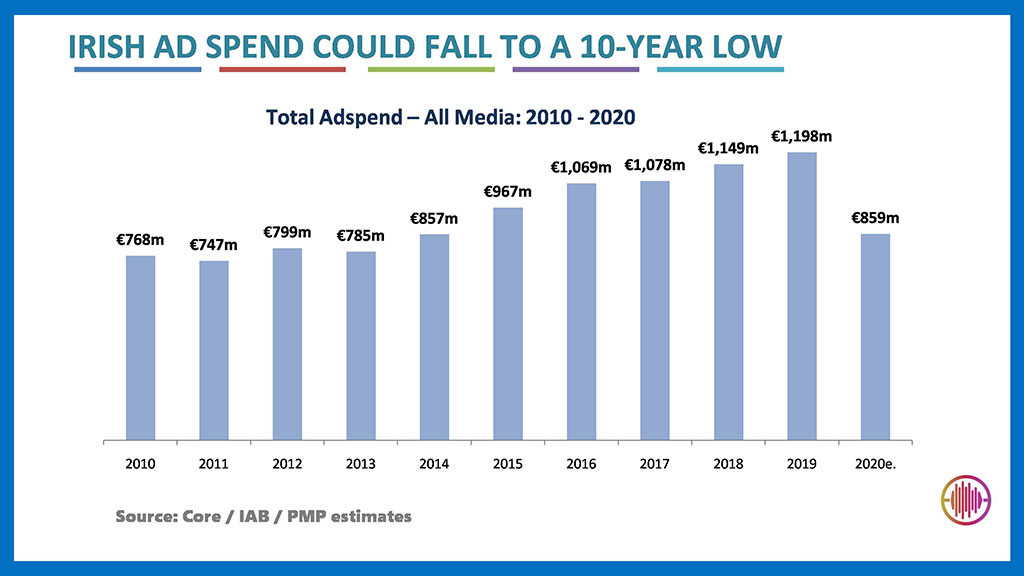 Not every medium will experience the same degree of pain though. The restrictions on people’s movements have resulted in a growth in the online consumer base and by extension, a surge in e-commerce amongst sections of the population who might have been ultra-cautious before now about purchasing online. Both of these trends will accelerate a shift in favour of online media spending.

Last month the IAB reported that there could be a 10-20 per cent fall in digital adspend. If one assumes the midpoint here, then 15 per cent could be lost from the €673m that was registered for digital media in 2019, leaving roughly €572m to play for this year. A slower fall-off in digital versus traditional media spending means that its market share could rise to around 67 per cent for 2020. 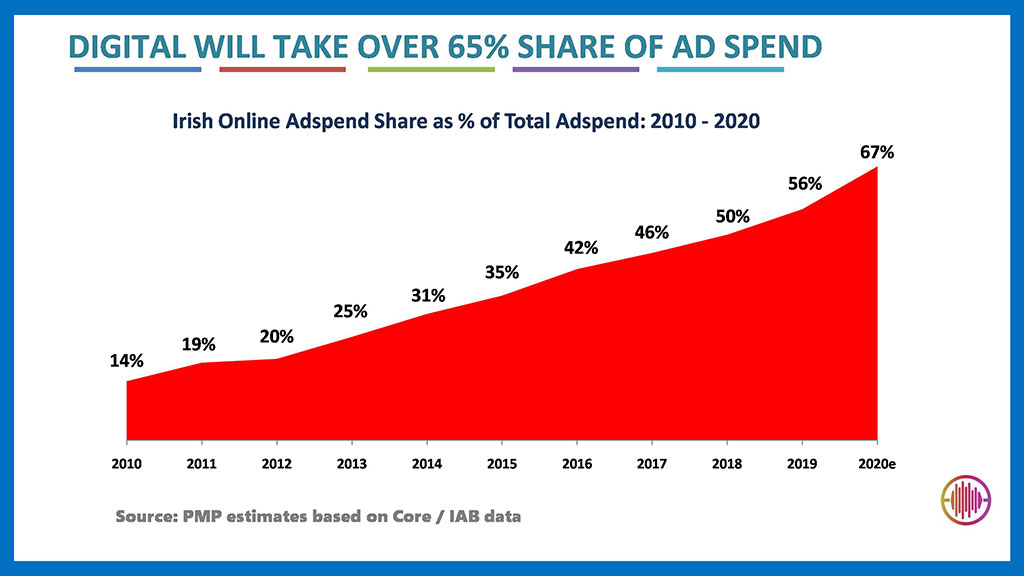 In theory, this should be good news for Irish media owners who have ramped up investment in their digital infrastructures over the last decade. But despite the boost in their online traffic volumes, every indigenous operator is experiencing a commercial meltdown. This is even more acute for companies such as traditional and digital news publishers as well as national and local broadcasters who primarily depend on the larger revenue which is derived from the ‘legacy’ side of their commercial inventory (i.e., spots, print ads, sponsorship, promotions, etc.).

It is estimated that Irish publishers took less than 10 per cent of the digital ad market in 2019 and within that, news publishers such as the Independent and the Irish Times, even with their very large online audiences, shared less than 4 per cent.

The IAB / PwC measure of the online ad sector underscores the dominance that Google and Facebook, with their portfolio of platforms, have within the market here. The duopoly dominates search and social ad spending which accounted for 79 per cent of the digital total last year. Furthermore, through their owned ad networks and data pools, Google and Facebook have a massive influence on the programmatic online display segment which almost certainly pushes their overall digital share close to 85 per cent. In turn this means that two companies will take between €52 and €57 out of every €100 that’s spent on advertising in Ireland this year.

Of course, one cannot restrict advertisers from the freedom to invest their money wherever they see the best commercial return. But there is more at stake here than just commercial efficiency.

As has been well documented elsewhere, the tech platforms have not exactly been paragons of virtue in their adherence to acceptable standards on everything from the protection of customer data, the vetting of extreme content and misinformation, to brand safety and fair payment for third-party content.

In the last week, Taoiseach Leo Varadkar strongly suggested that a future administration will want to exam “a future approach…to share out more fairly, the revenues that media platforms of all sorts make” and went on to refer to the tech companies as being “free riders on costs incurred by other people.”

With so many other demands facing a new government it could be that this view will remain more aspirational than actionable. But it is imperative that this commercial crisis is treated with the seriousness that it deserves. What is at stake here is a sustainable, indigenous media sector in all its shades. One that speaks truth to power, that tells our stories, celebrates our culture and continues to hold up that mirror to our virtues and imperfections.

That is why the next government needs to have the vision, creativity and conviction to develop a fair mechanism, in the way other countries have done, to level the commercial playing field. There is too much to lose.

(Note: *Advertising market estimates are based on a combination of the Core data for Print, TV, Radio & OOH and IAB / PwC reported values for Digital ad spend covering the period 2010 – 2019 and my estimates for 2020.)